At this point the Samsung Galaxy Note 8.0 is a bit “old”. Launched in April 2013, by Android standards it is an antique. And while we’ve seen many new Galaxy devices in the last 14 months, there’s been no new Note 8.0. The arrival of Android 4.4.2 KitKat on my WiFi version today made it a model worthy of 2014.The update came in at over 700MB and the over-the-air process was smooth and relatively quick. This isn’t a radical change for the Note 8.0, but it does feature a few key improvements. Among them are better battery life (we’ll continue to check that in the coming days), new notifications, cloud print, immersive mode and more. The new version of Touchwiz found on the S5, TabPRO and NotePRO isn’t there, but that isn’t a huge deal. 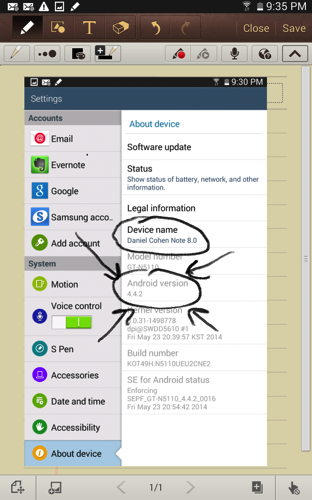 I’ve always liked the Samsung Galaxy Note 8.0. It is nicely sized, plenty snappy and the S-Pen is far more useful than I ever expected it would be. Add in the fact that, unlike the iPad mini, it has a microSD expansion slot and you have a medium-sized tablet that is a pleasure to hold and gets the job done with ease. Despite promises to the contrary, Samsung being Samsung, I honestly expected that it would NEVER see an OS update. That point was driven home even more strongly this past Monday when Apple showed just how far-reaching the iOS 8.0 update will be. Wasn’t I surprised when the Note 8.0 update actually arrived tonight.

It is good to see Samsung updating “older” devices, and I’m especially glad that the Note 8.0 I’ve kept around was one of them. Do you have the Samsung Galaxy Note 8.0? If so, has your update arrived? 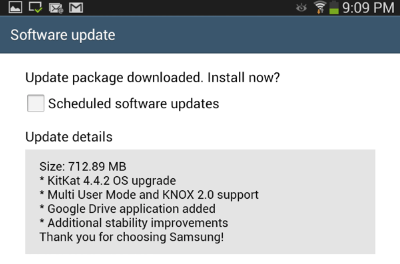