Judie and I were huge fans of eWallet from its earliest days, back when we used Palms; we synced the info on our Palms to the eWallet program on our desktop PCs. Later on we used eWallet on our Pocket PCs. Once the app became available for iOS, we loaded it onto our iPhones and eventually also on our Macs.

Bear in mind that each app or program for each device was a separate purchase, but it was one that we were happy to pay because one of the huge selling points for eWallet on whatever platform we used was that when you purchased it for one platform it would sync perfectly with our mobile device. These days, that is no longer the case.

Judie: I no longer just use an iPhone or iPad with my Mac; nowadays I might be on a Windows Phone or an Android device, but I have learned the hard way that I can no longer use eWallet and sync it easily to anything but an Apple device … which would be fine if eWallet advertised itself as only catering to Windows PC or Mac users who used iPhones, but that is not the case.

While Ilium sells apps specifically for Mac, Windows PCs, Windows RT, iOS, Windows Phone, Android, and even BlackBerry, unless you are using the combo of iOS with Mac, iOs to iOS, iOS to Windows, Windows PC to Mac (through Dropbox), or Android to Windows, you will not be able to sync between a computer to your devices. This may not be that big of a deal to someone who doesn’t have a lot of passwords to store or who only uses devices on the same platform, but it’s a huge pain for someone (like me) who has invested themselves in the eWallet system with multiple product purchases for software that stores all of their passwords.

I recognize the importance of unique and hard to crack passwords, and I have relied upon eWallet as my portable password protection for so long that I don’t want to have to find a new solution, but it’s become abundantly clear to me that I am going to have to. 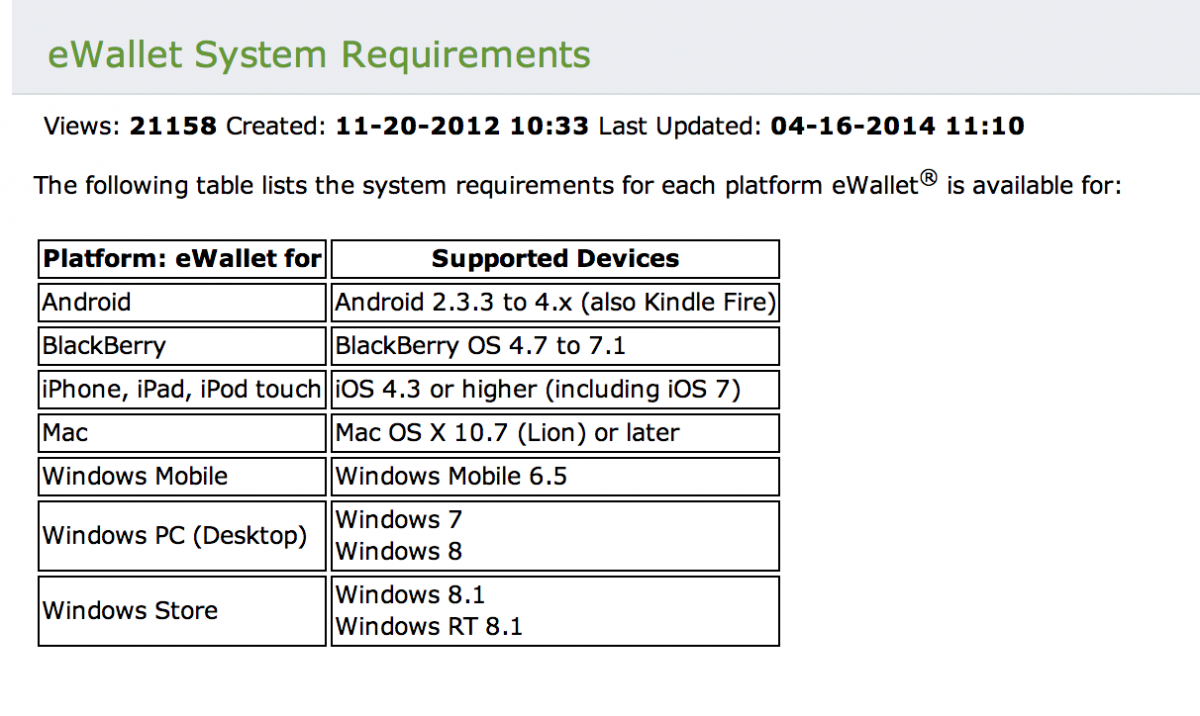 Carly: eWallet has synced quite nicely between my iPhone and my iPad, and I loved the interface for generating and saving personal passwords and information. Unfortunately, since I switched to Windows Phone and then to Android, I’ve been repeatedly let down by eWallet, which in turn has destroyed my faith in Ilium Software. First, their eWallet GO! app for Windows Phone is a standalone product, with no syncing capabilities at all.

When I switched from iOS to Windows Phone,  I saw there was an eWallet app, and I (naturally) assumed that using it would be an easy transition; it was a rude and disappointing awakening to discover my iOS data was trapped, and exporting it wouldn’t help get the information to my Windows Phone.

Judie: To be clear, there is an option on the Mac desktop to export your eWallet data, but it will not export into a file format that is easy to import into any other wallet app– including Ilium’s own other iterations! Sure, you can save your data as a text file, but in my case — when I have over 300 different unique passwords saved — re-entering that data into a new app or the eWallet app on another platform is a daunting task. I just want to continue using eWallet. I’ve invested in this app, I like this app, and now I have hit a brick wall; it’s ridiculous!

Carly: Now that I am on Android, I could pay $9.99 for eWallet for Android, but I would need to spend another $19.99 for the program to get my data out of iOS, to a Windows PC, and onto my HTC One. Effectively, I would have to invest $40 ($9.99 for iOS, $9.99 for the Android version and another $19.99 for the desktop app) just to keep app continuity among my devices. And remember, that’s leaving out my Windows Surface RT, which handily runs eWallet for Windows 8, BUT that version of eWallet is yet another dead-end app … no syncing with anything else if you want Windows 8!

Evidently other software manufacturers are able to find a way to sync across multiple platforms without issue, but for some reason ilium hasn’t worked out the process. May I offer a suggestion?

My Windows PC and my Mac both use the same eWallet file that I keep in Dropbox. Why can’t their mobile apps do the same? eWallet certainly wouldn’t be the first app to use Dropbox (or some other similar service) as a common dumping ground, and if mobile devices could all read the same eWallet file formats across the board, there would be no issue.

The question is, why hasn’t eWallet bothered to do this?

Carly: The only obstacle I can see is of their own making-Ilium’s various apps all use different file extensions (.wlt, .swlt, .swltx, are all extensions used by the eWallet apps). It’s both likely and disappointing that they simply don’t care to unify their platform or their services. Whether it is because they are disorganized, disinterested, greedy, or incompetent does not matter to those of us who have invested in the company by buying their apps; we just want one of our favorite apps to work properly on each platform they claim they support!