A short while ago, I wrote about the Kinivo Bluetooth Car Kit; well, they’ve sent me one to review, and I like it so much that I will be ordering at least two more. Why? Because now my non-Bluetooth equipped SUV is now able to stream music and take hands-free calls. This solution is not perfect, but it’s pretty awesome.

The Kinivo is a gadget that plugs into your car stereo’s auxiliary port and connects to your phone via Bluetooth. Once it’s set up, you can stream music from your phone or tablet through your car’s speakers, and you can control the volume with your car stereo’s knob or the volume paddles on your car’s steering wheel. That’s pretty cool on its own, but the smooth way that the Kinivo Bluetooth Car Kit handles phone calls is the best reason to own one. 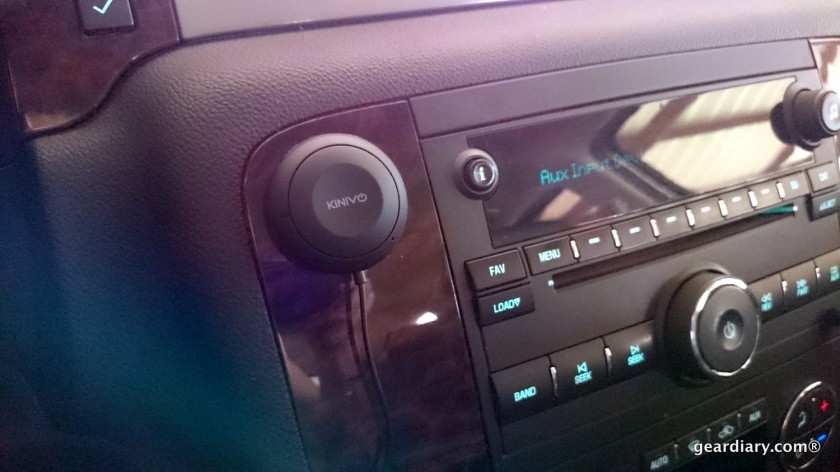 Included in the box are the DC charger, the Kinivo Bluetooth “button”, a3.5mm female to male audio extension cable, two adhesive disks, and a user manual (not shown). 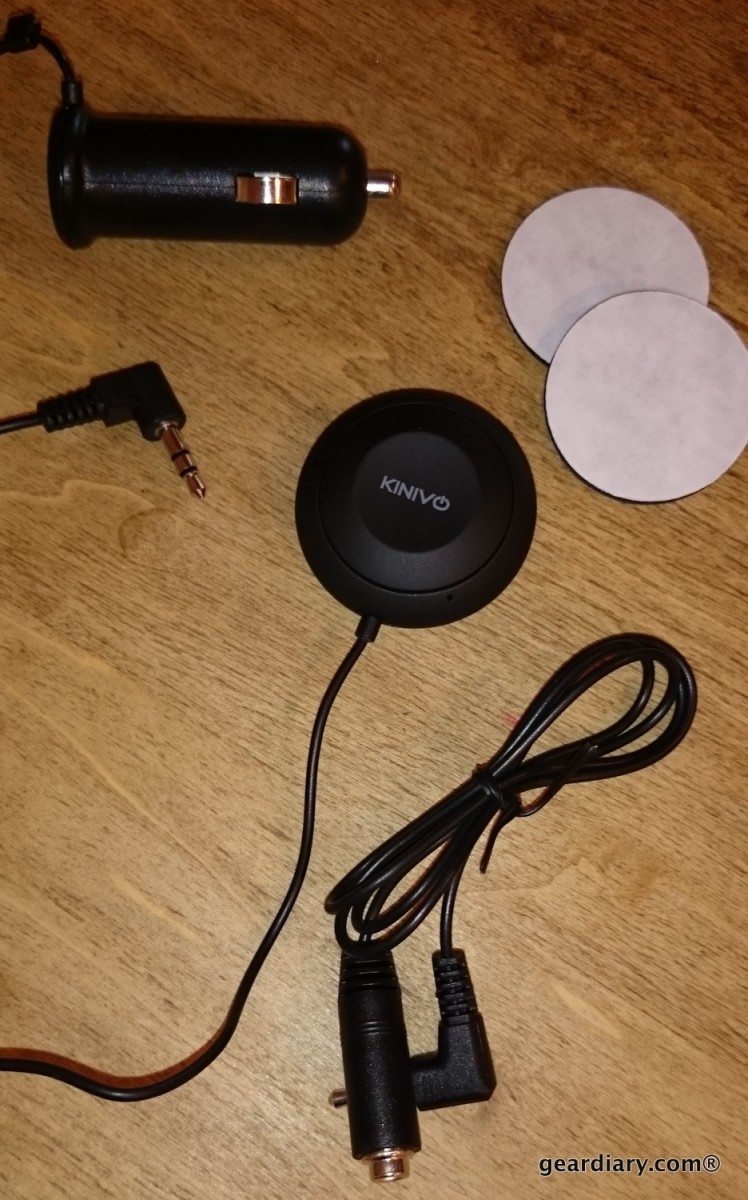 The Bluetooth “button” (I’m putting that in quotation marks because it is not the proper name for it) is the heart of the Kinivo Bluetooth Car Kit. It measures about 1.6″ across, and it is about 0.6″ thick. The center is a multifunction button, and there are buttons on the top side for selecting the next song or the previous song. There is also a microphone on the bottom edge of the button. 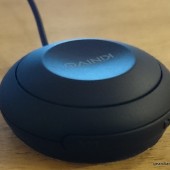 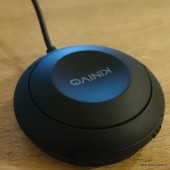 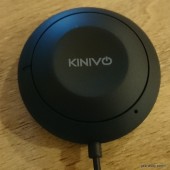 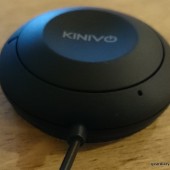 The Kinivo uses Bluetooth Multipoint, so you can connect up to four devices to it, with two devices simultaneously connected. It works with Siri, so you can tell Siri what you want, and she can perform the commands on your iOS device. The first thing you have to do to get started is pick button’s installation place. I went a little bit higher than I should have, because I wasn’t considering the differences in my automatic column shift when in Park and Drive; oops. Since there are two adhesive disks included, I may eventually move the Kinivo button a tad bit lower, but for now I’m okay with it.

My auxiliary port is on the right side of the stereo, so I used my right side power point and tucked the wires in under the console. The setup is obviously not factory, but it doesn’t look too homebrew. 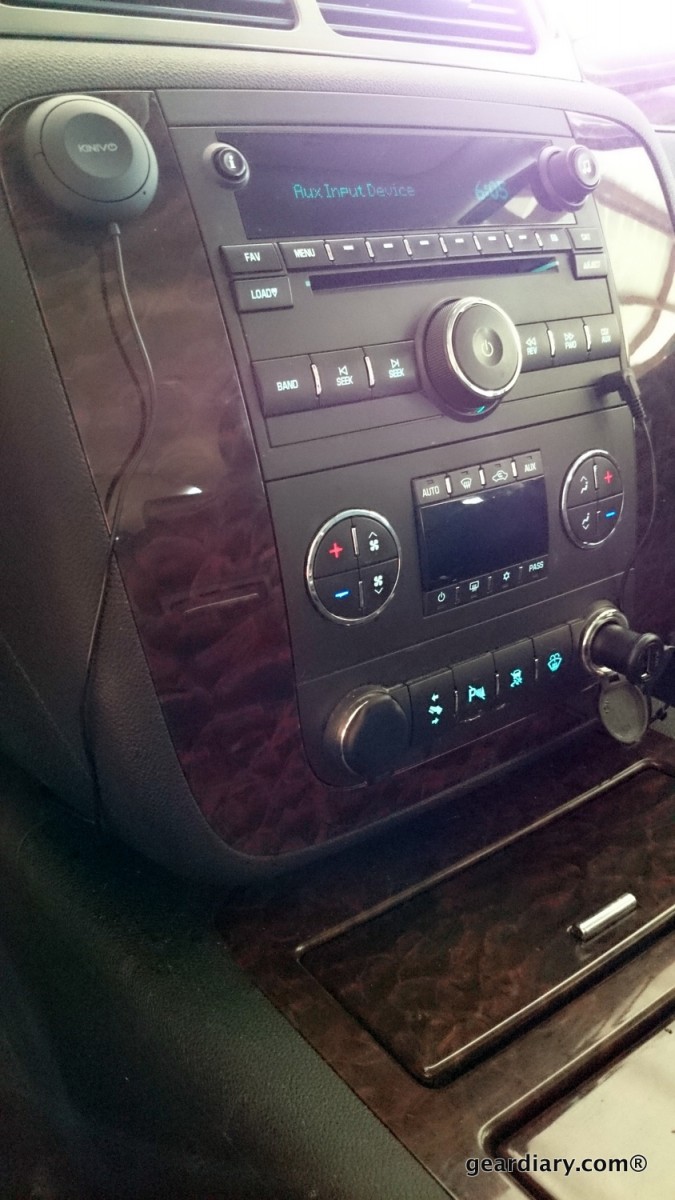 Pairing the Kinivo Bluetooth Car Kit to my phone was a matter of plugging in the kit, which sent into an initial pairing mode. If you miss that pairing window or if you want to pair a second device, you just press that center multi-function button for 8 seconds (or until the lights begin to flash red and blue). 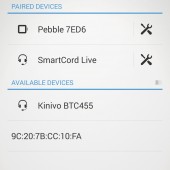 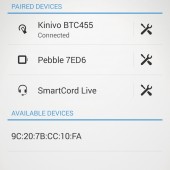 Once your phone is paired, you can check audio profiles from inside your BT manager. 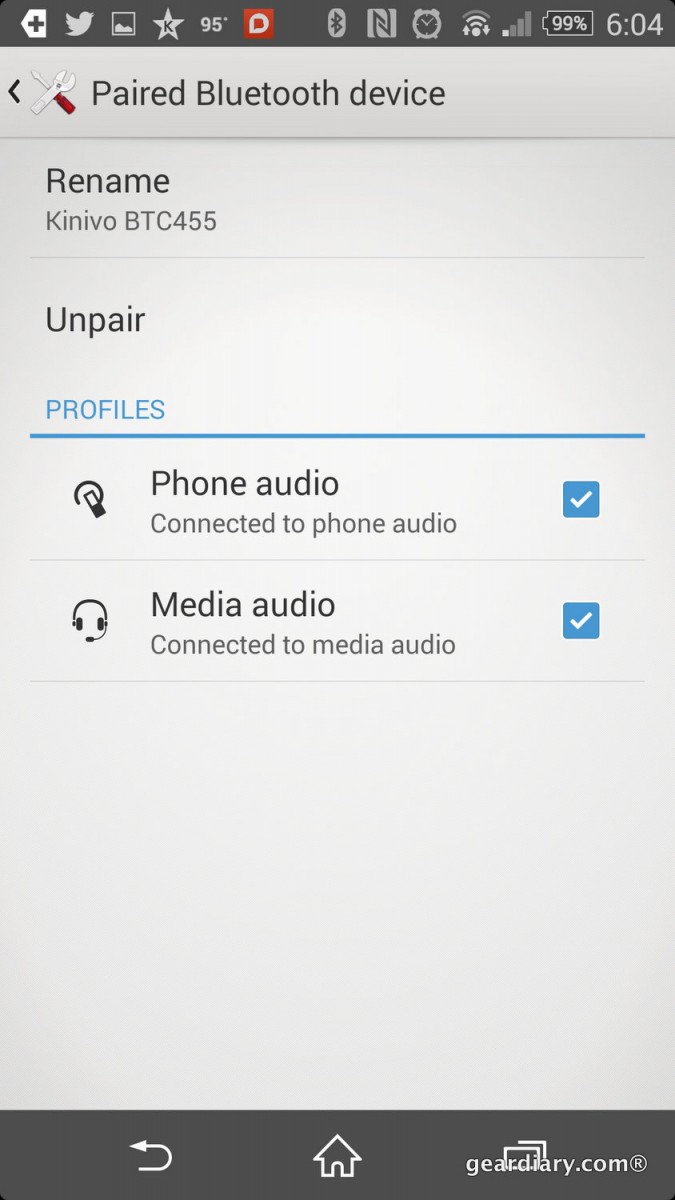 Once the kit and your phone have paired, as long as the auxiliary cable is plugged into your car stereo, when you when you receive calls you’ll be able to answer them handsfree. If music is playing, it will silence the moment your phone starts ringing, and it will turn back on once the call is over. Calls made through the Kinivo BTC455 are surprisingly clear for both sender and receiver; other than anyone else in your car being privy to your conversation, this is so much better than holding the phone to your ear while you are trying to drive!

Music streaming through the Kinivo also sounds great; I noticed that there didn’t seem to be nearly as much engine noise as there is when I connect my phone directly to the auxiliary line, but the Kinivo’s manual mentions that if you do still hear it, you should use a 3.5mm ground loop isolator. There is a chance that your music will sound choppy during the first 30 seconds that it is powered on; this is because of the Multipoint feature which searches for paired devices during the first 30 seconds. After it has completed those 30 seconds of searching, audio will be just fine.

Which brings me to the only real con I can find: at least on my car stereo, when something is plugged into the auxiliary port, you no longer have the option of listening to satellite radio or terrestrial radio without exiting auxiliary mode. That makes sense, right? What this means is that as long as I am content listening to streaming music (in areas with 4G) or playlists on my Z2 (everywhere else), I’m set. But if I exit auxiliary to listen to Howard Stern, for instance, I will no longer have hands-free calling as an option. So far this hasn’t been an issue, because I’ve been content to listen to my music through BT streaming. Eventually. I’ll want to listen to something else, and when that happens I’ll deal with the loss of my hands-free phone, then.

The Kinivo Bluetooth Car Kit (BTC455) is available for $44.99 through Amazon

What I Like: Plug it in to your auxiliary port, connect it to your phone via Bluetooth, and just like that you’ve added hands-free calling and streaming music; easy to set up; easy to operate; doesn’t look too homebrew once installed

What Needs Improvement: You won’t have BT functions if you leave auxiliary mode, i.e. when you are listening to satellite or terrestrial radio