You’ve seen all the different variations and spoofs of “Let It Go” by Idina Menzel from Frozen, Disney’s animated film remake of Hans Christian Andersen’s The Snow Queen story. Now it’s your turn to perform, record, and share your musical performance of the nine original featured songs in the Disney Karaoke: Frozen app on iPad.

First and most importantly, this 94 MB app (approximately 344 MB after downloading the original content) works on iPads containing iOS 7.0 and above. Access to the iPad microphone is also required for recording purposes.

Based on the highest grossing animated film of all time, Disney Karaoke: Frozen songs include the following:

The high quality visuals and sound match the film’s quality, so users can quickly and easily delve deep into the music. Even listening can be a great experience though singing and/or recording performances represent the app’s main purpose. Users can also access the videos without an Internet connection. 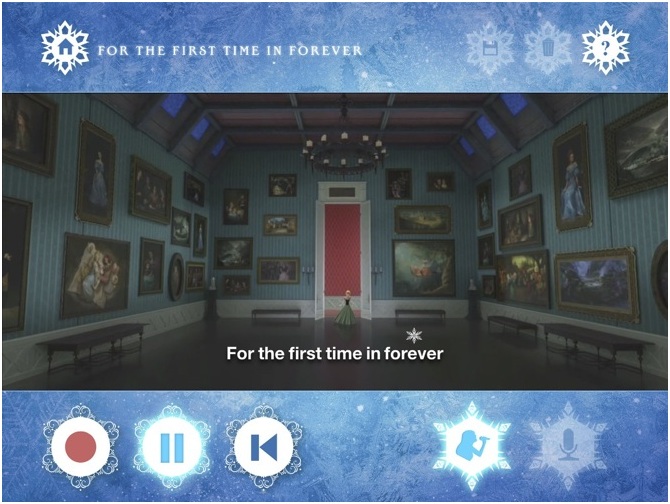 The music videos visual are taken directly from the movie and developers use a snowflake graphic along the lyrics (doubled on duets) as the songs progress. Users have a play/pause button and a restart button that returns to the beginning. Users can easily practice songs several times before they try for a high quality performance recording.

The text is nicely colored and blends with the movie visuals, but does not allow users to increase or decrease the size, which can make performances more challenging for certain users.

In performance users can listen to the actual performances or mute them while viewing the progressing lyrics and video, but when recording users only get the music audio, not the vocal audio. There is a helpful solution, especially for young ones who cannot read. Users can always listen to songs on a separate device as a guide when they record their version using this app from Disney Publishing Worldwide (DPW) and Walt Disney Records. 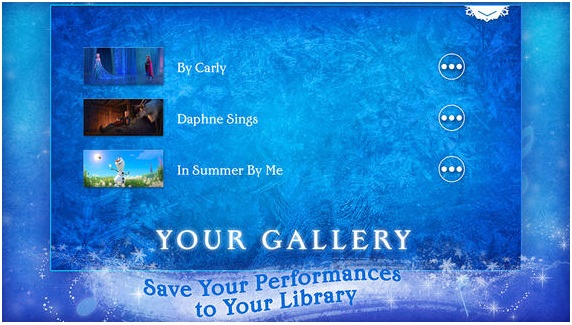 Completed recordings can be previewed then saved in a special gallery that can be exported to iTunes libraries. Hopefully more sharing options across different platforms/medias are available in the future.

Disney Karaoke: Frozen also works with AirPlay, where players can show the music on television screens. AirPlay lets users wirelessly stream what’s on their iOS device to a HDTV and speakers via Apple TV or can mirrors exactly what’s on the display to the big screen. 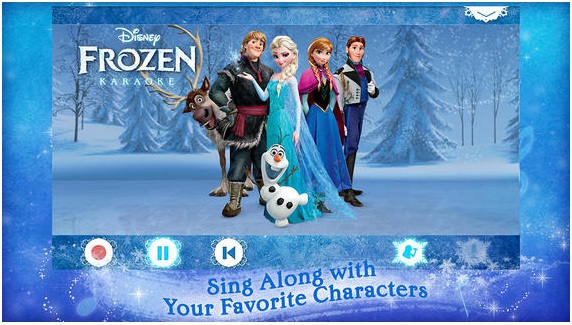 Except for a few minor issues, users will feel like it’s Christmas in July with this quality iPad musical movie app. A great enhancement/supplement to the wildly popular film experience that can unlock a hidden music star while offering hours of all ages entertainment.

The audio components (with and without vocals) are also available on the CD Disney Karaoke Series: Frozen and include all the same songs as the app except “Frozen Heart”.