My name is Carly and I have a very shameful confession: I’ve become hooked on Kim Kardashian: Hollywood. I want to stop, but every time I think it’s over, I duck back in…one more chance to make the A-list. Worse, I’ve dragged Judie into my shame spiral, and now we’re both addicted. At least we both have nice virtual houses.

Carly: We’ll take a break so you can stop laughing at us.

Judie: Oh, go ahead! We are laughing at ourselves! You might as well join in the fun! 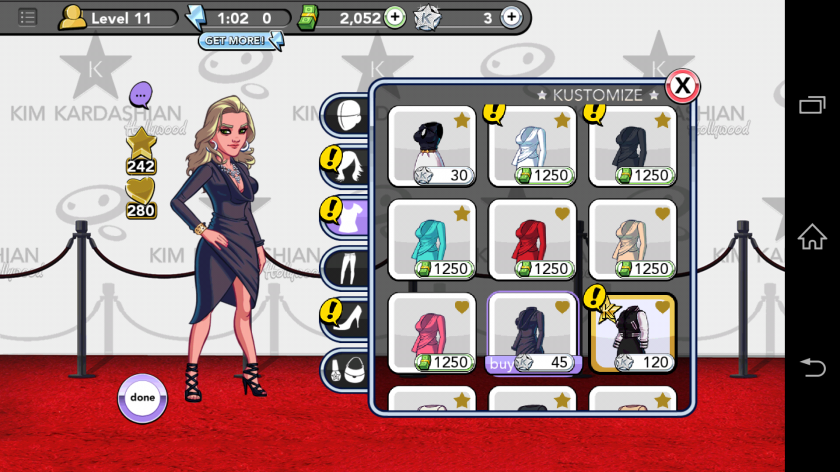 Carly: See, we never intended to get hooked on the game. It started on a whim, after reading about how a writer for Jezebel spent $500 playing it. We laughed and laughed [and laughed!! -Judie], and asked how anyone could be tempted to spend that much on a game that encourages you to be fake-famous. So both Judie and I downloaded the game to see what would happen. 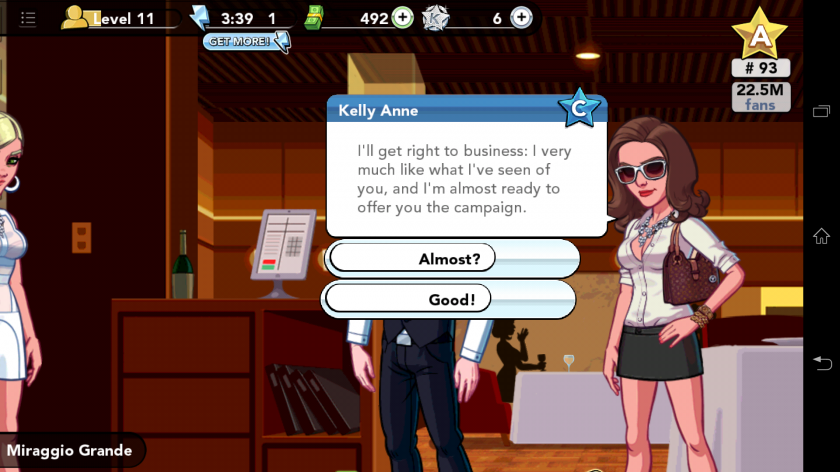 Judie: I started on my iPad mini, but because at some point my iPad was downstairs at Dan’s lake house when I felt the urge to play (and I didn’t feel like going to get it), I started playing on my Sony Xperia Z2 instead. That’s when I made a fascinating discovery: you can make more money or collect more stars when you are playing on an Android device … no joke! 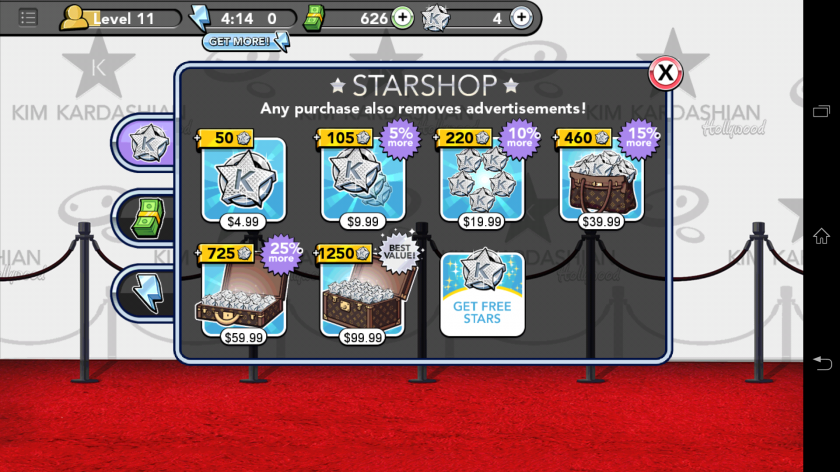 I blame the fact that I could get anywhere from 4 to 30 stars for downloading apps (that I promptly uninstalled) on why I made A-list so quickly and managed to get cool apartments in Downtown LA and Tribeca, a mansion in Calabasas, and a fab beach house in Punta Mita. I also have a big black car called a Banshee. Oh, and a cat, and three dogs. And I own the store I was working at when I started the game. And I have an ugly dress that Kim Kardashian gave me to wear to my birthday bash in Las Vegas. 😛 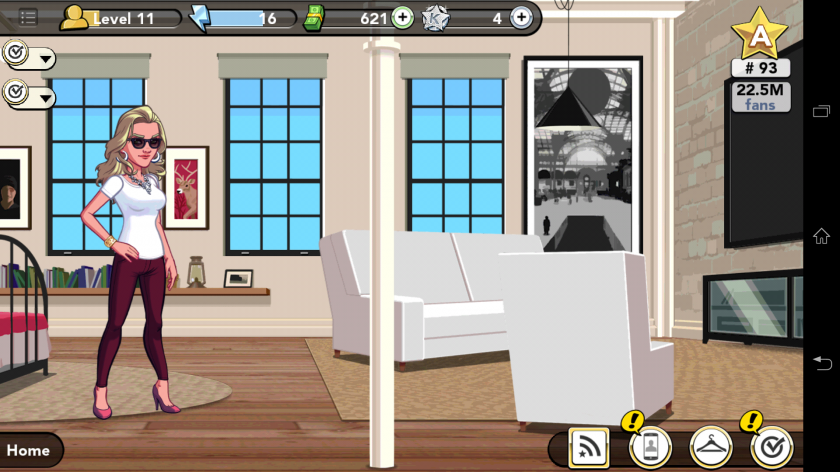 Carly: We were sucked in. I can’t speak for Judie, but I find the game to be weirdly soothing; it’s a choose your own adventure game where there is no wrong choice that ends in a cave with a slobbering monster. If someone insults you and you take the high road, you get praised. Insult them back, and you still get praised. 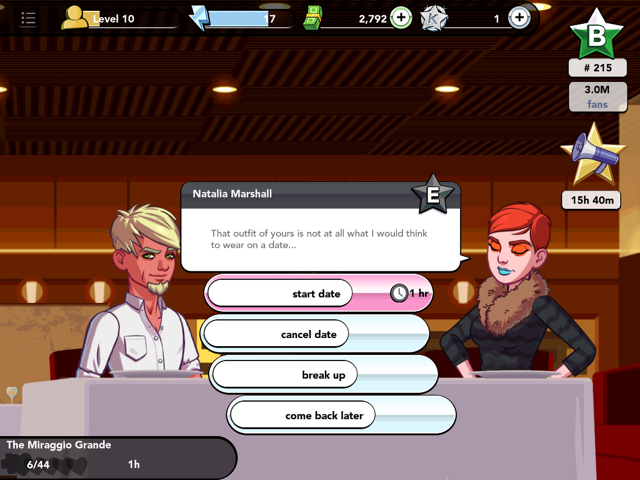 Judie: Throw a drink at someone who is rude to you, and you still make money! Life should be so awesome. 😉 The downside is that I had a virtual boyfriend; I bought him gifts and expensive meals, but I guess I wasn’t attentive enough. He broke up with me over a phone call; I’m pretty sure that one of the gossip rags covered it, and I got sympathy followers on Twitter for it. It’s okay, though … I have a new boyfriend, and he is much hotter. 😉 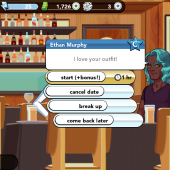 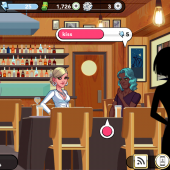 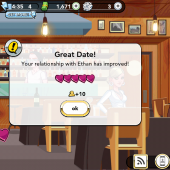 Carly: The biggest consequence is that you don’t advance as quickly on your quest to be A-List, but that’s the extent of your risks. Otherwise your virtual avatar just drifts through parties and photo shoots, as long as your avatar has energy. 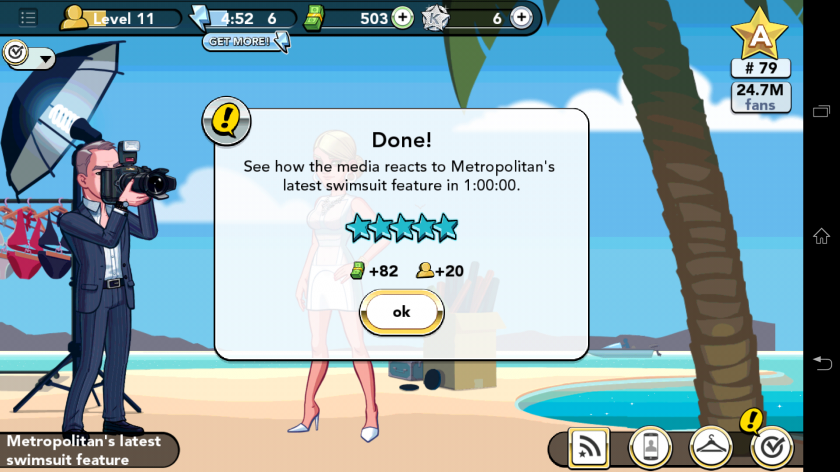 Judie: Drifting through parties and photo shoots is how you earn level points (gold coins), energy (lightning bolts, money, Kardashian stars, and experience points (blue stars). You want to buy clothes and accessories as often as possible, because that’s how you get extra points for professionalism, romance, and whatnot. 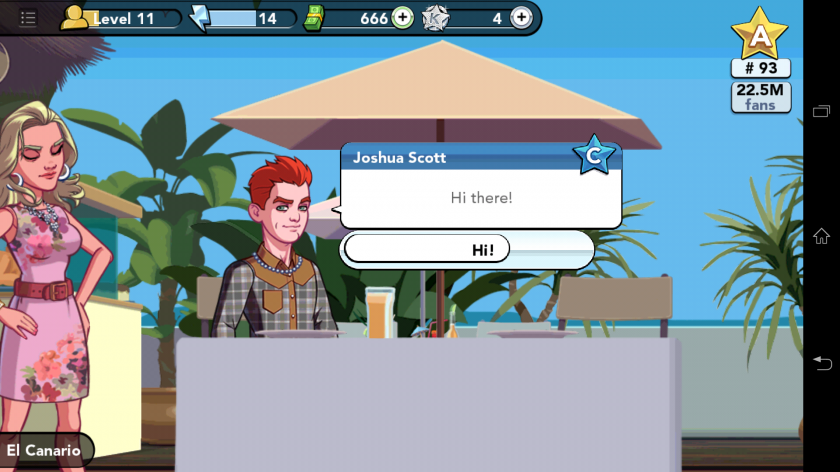 In other words, you can spend a lot of virtual money maintaining the Kardashian lifestyle. It is possible to advance in the game without spending any real money, but it will take longer and you have to be somewhat crafty. 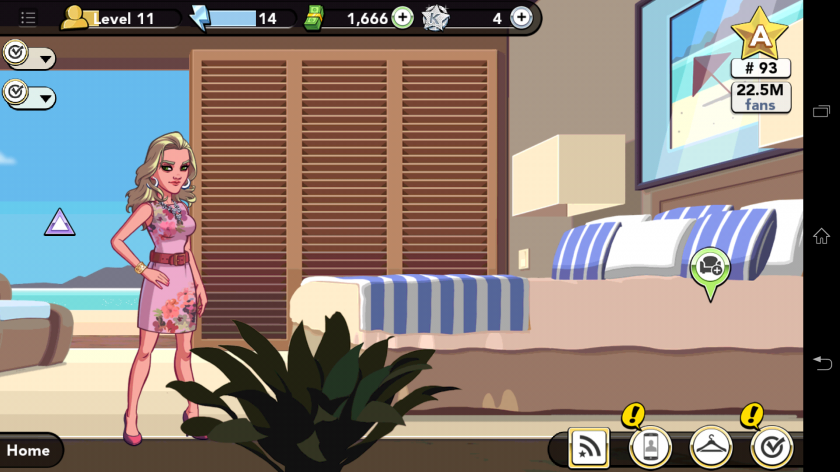 Carly: And like a frog being boiled, the amount of energy needed slowly increases, until you’re backed into a corner; buy more energy or sign up for free offers, or you’ll have to wait agonizing hours to keep playing this ridiculous game. No wonder it’s generating $200 million in revenue-you have to pay/watch sponsored ads in order to keep playing! 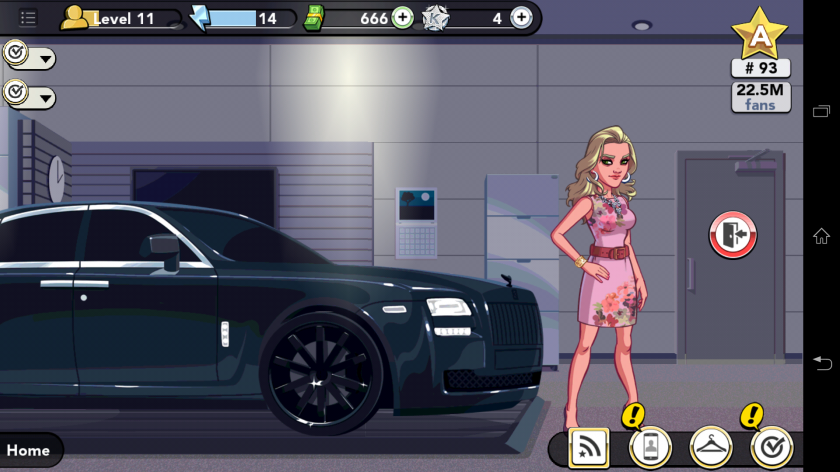 Judie: And that is exactly how I have managed to get ahead! I have watched more app videos and downloaded (and then quickly uninstalled) more worthless apps while playing this game, just to earn extra money and Kardashian stars. There are so many subtle and not-so-subtle positive affirmations flying everywhere, it is no wonder that it’s so addicting to play and continue to advance. 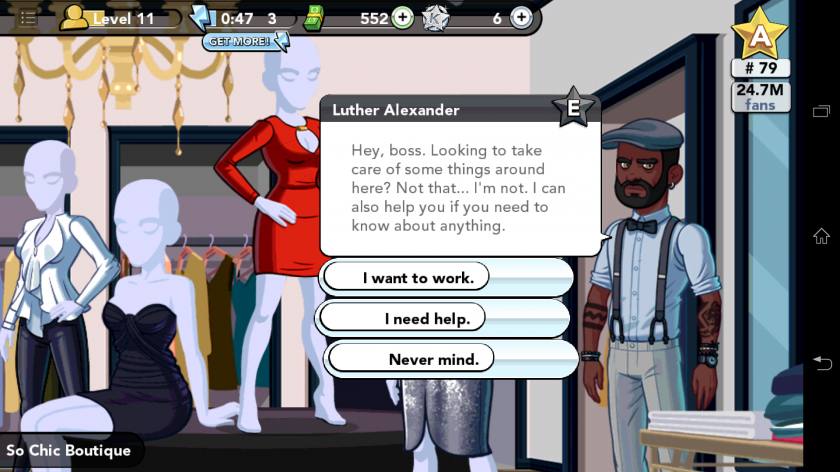 Carly: I want to stop. There are so many better things I can do with my time. But every time I think it’s over, I get notified that my energy is full, and it’s time to go on a photo shoot or a date and get famous! I know I could just delete it and go cold turkey, but it’s so hard… 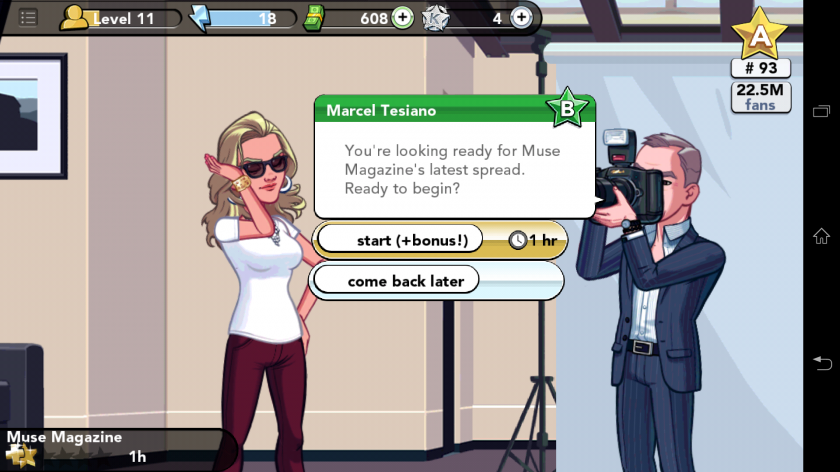 Judie: I’m to the point that I play just a couple of times a day now, but every time I see my ranking slip because I blew off a photo shoot or appearance, I find myself getting sucked in again. At the moment I am #93 on the A list and I have 22.5 million fans. Every time I complete a photo shoot I gain fans based on its media performance, and that’s pretty heady — even if totally imaginary — stuff. 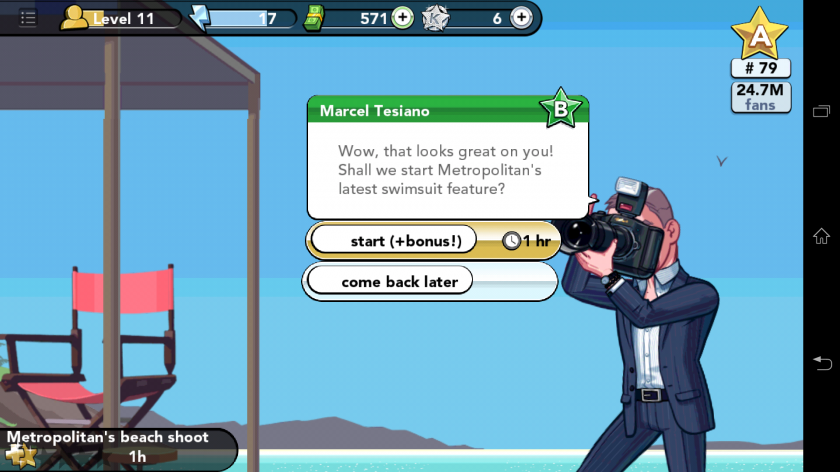 Carly: Exactly! It’s non-stop positive reinforcement, and that feels pretty cool. It’s not surprising that it has made so much money! Speaking of, I know you said you took a bunch of offers on the Android version to gain points and in-game currency. I haven’t really, aside from a few “watch a video” promos, and I’ve noticed it is really hard to advance without buying more energy. I started a three hour event with a full batch of energy and only made it halfway. 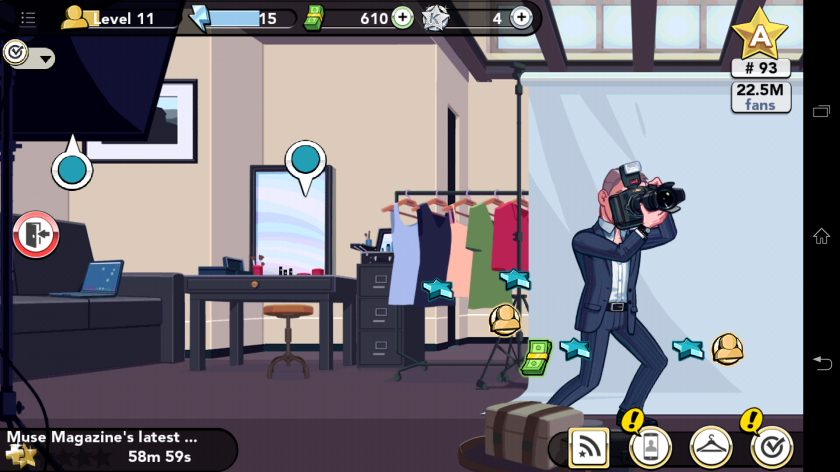 It takes 5 minutes to regenerate energy, and my energy bar tops out at 24. That means I need two full hours to recharge, at which point I will use it all to finish the event. Then I need to wait another two hours if I want to move on to a new in-game activity. It’s pretty clever; the game is designed around these events, and the more you are immersed in the game the more it becomes tempting to pay up to keep playing. I wouldn’t want a kid with low impulse control and an iTunes account to play this game…I can’t imagine what the bill would be! 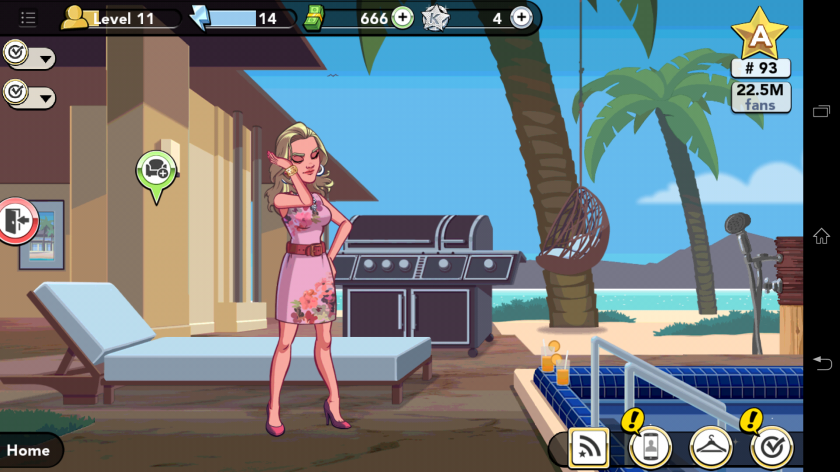 Judie: Ah, see, I am not as patient as you. The minute I am out of energy, I am jumping in my car or on a jet and flying to every single location because I know that if I tap certain bushes, newspaper machines, fire hydrants, skateboards, birds, etc., I’ll get money, experience points, and best of all – energy! Even better, tapping my various pets spread out across my homes gives me an extra shot of energy, money, and experience points. See, just as in real life, there are benefits to owning virtual pets! 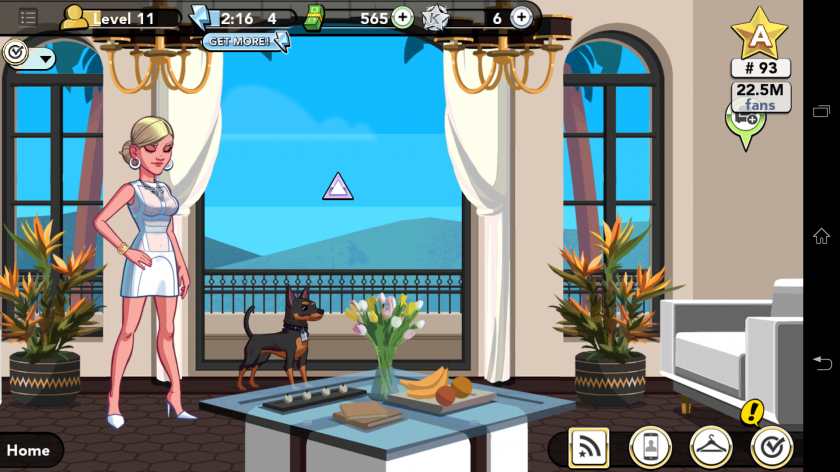 After collecting from all of these stash points, I head back to the photo shoot or event, and nine times out of ten, I have enough energy to complete it, which means I can put my phone away for another few hours, come back once my energy has refilled, and start my next “mission”. It’s a bit of an addiction, I’m afraid. :-/

Carly: Addiction or just fun gameplay, this game is crafted to do exactly as described. You go on fabulous dates, “work”, and become quite famous. Is it worth your time? I keep saying it’s not, yet as soon as I finish typing this I’m off to play again… See you on the A-List!