August 27, 2014 will be the 22nd anniversary of the initial Super Mario Kart game release (now available for $7.99 in Nintendo eShop for Wii U), the beginning date of the Mario Kart 8 online worldwide “Mercedes Cup” tournament on the Nintendo Wii U and the earliest date that Mario Kart 8 players can download three free Mercedes-Benz cars. 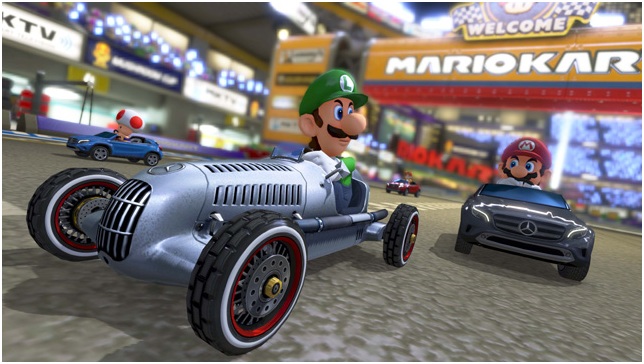 These cars include the modern Mercedes-Benz GLA (with special wheel options), the 300 SL Roadster from the 1950s and the legendary Silver Arrow of the 1930s and will all be customizable with various wheels and gliders.

Nintendo and Mercedes-Benz will also host the upcoming online worldwide “Mercedes Cup” tournament (see online tournament section in Mario Kart 8) from Wednesday, August 27 to Tuesday, September 23. Participants will need a broadband Internet connection as well as (obviously) a Wii U game console, the Mario Kart 8 game, and the Mercedes-Benz karts.

Nintendo also has a Mario Kart 8 game update with the following improvements, so be sure you are “up to speed” on your Wii U.

– Drivers will now have the option to display the course map on the TV screen during races.
– The order of the menu after each race will be changed to “Next Race,” followed by “Watch Highlight Reel.”
– The game will remember the most recent kart options that were selected, even if the Wii U system was powered down.
– Users will be able to change options of other players’ Mario Kart TV downloaded highlight reels, such as changing the focus to different characters or actions.
– A score screen will be added so players can see how many coins they’ve collected, the win-loss record of their online battles and their frequently used characters.
– Improved the stability of the online connection to enhance user experience during online battles.