I’ve never seen myself as a minivan type of person, but I have always considered myself practical. What will allow me to haul my family from Point A to Point B safely, comfortably, stylishly, and perhaps most importantly — without feeling like I’m driving a land barge? The 2015 Kia Sedona is a multi-purpose vehicle that easily accomplishes that goal.

I recently spent an afternoon driving a loaded Kia Sedona SXL through some of the twisty Southern California hills near Dana Point. While I may not be the typical Minivan customer, I left thinking that driving a Kia Sedona was a much more attractive option than I had previously considered. 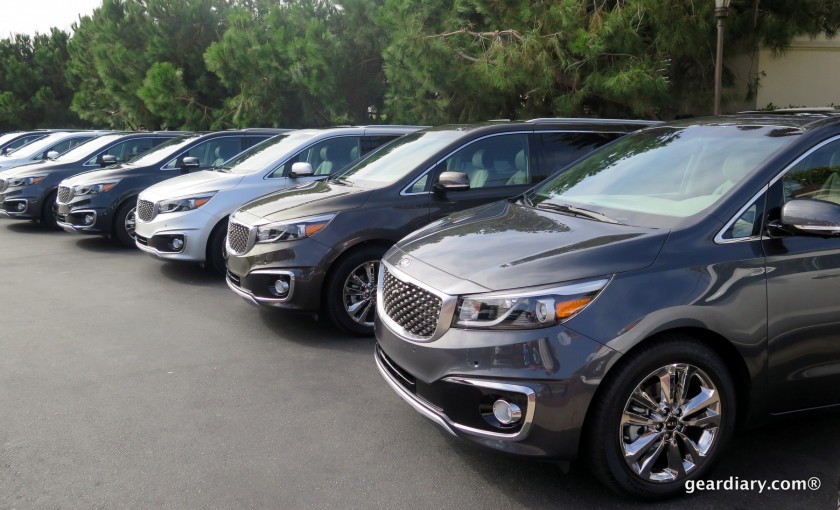 Kia refers to the Sedona as a “multipurpose vehicle” rather than as a “minivan”. During the press conference before our drive, it was explained that “minivans were introduced in the 1980s, and we think this is really going to disrupt the minivan segment. [The Sedona has] got CUV-like [Crossover Utility Vehicle] design … it’s filled with innovation and technology … This vehicle is a Global vehicle — we sell it around the world, and everywhere else in the world, they call it the multipurpose vehicle. So in the traditional Kia way, we are going to challenge traditional convention and thinking, and we are going to call it the multipurpose vehicle.” 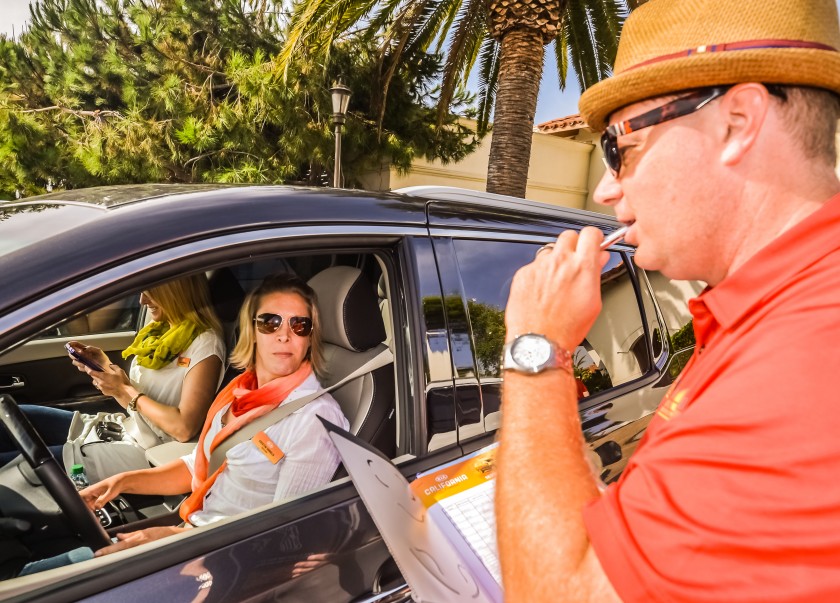 Prepping for our drive/Photo courtesy of Kia

Okay. Well, in the US, we still call vehicles that have sliding doors on each side and a liftgate in the back minivans, and I don’t necessarily see this as a bad thing. But I guess minivans also carry connotations of soccer moms and carpools, and there are likely people who have issues with that, so I understand why Kia might want to distance themselves from the moniker. Anyway, I am probably going to slip and call it a minivan multiple times, so forgive me in advance.

Made to easily carry families or groups of up to eight, this third-generation Sedona is for people who need an efficient yet sporty vehicle, but it’s not just for hauling people! Due to its new Slide-N-Stow middle seats and fold-flat rear seats, the 2015 Kia Sedona can also convert quickly and easily into an effective cargo carrier. Check this out …

Both sides have automatic sliding doors which open into a very comfortably appointed middle seating area. 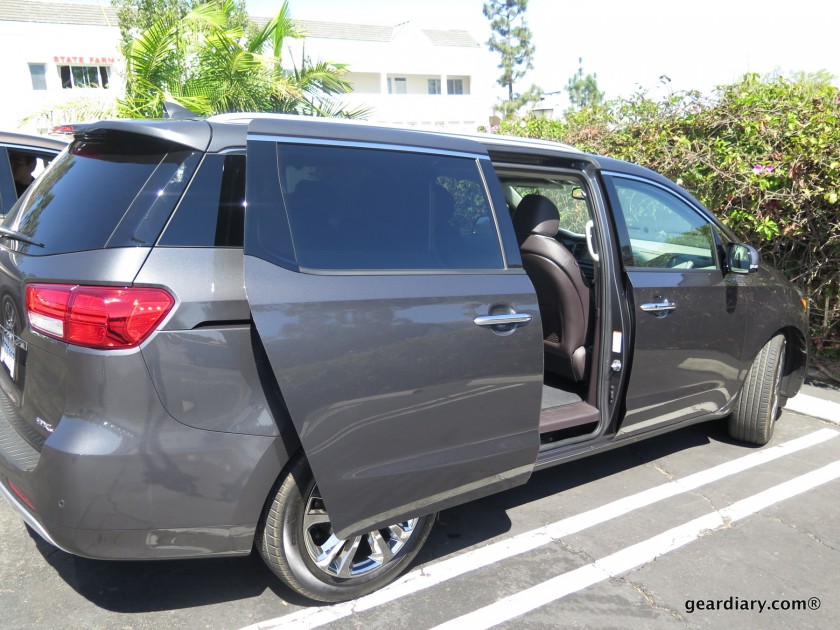 Take a look at the headrests on the seats — those are modeled after the first class airline seats. But that’s not all. 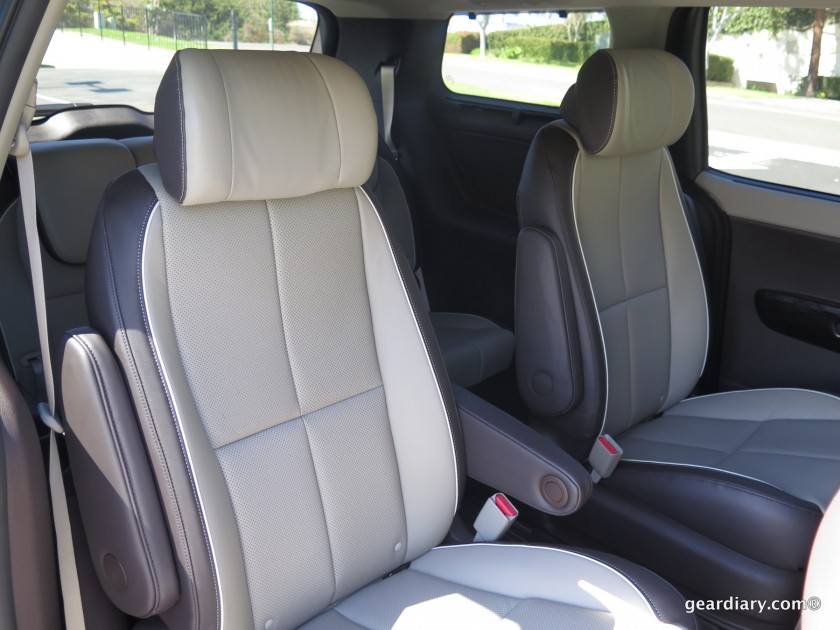 If no one is sitting in the back row, and someone else is driving then you can really scoot your seat back, kick up the leg rest, and take a nap. Looks heavenly, doesn’t it? While it may not be quite as plush the back seat of a Maybach (which is also modeled after first-class jet seating, by the way), you can pat yourself on the back for not shelling out half a million to get the same effect, because that would be just silly. 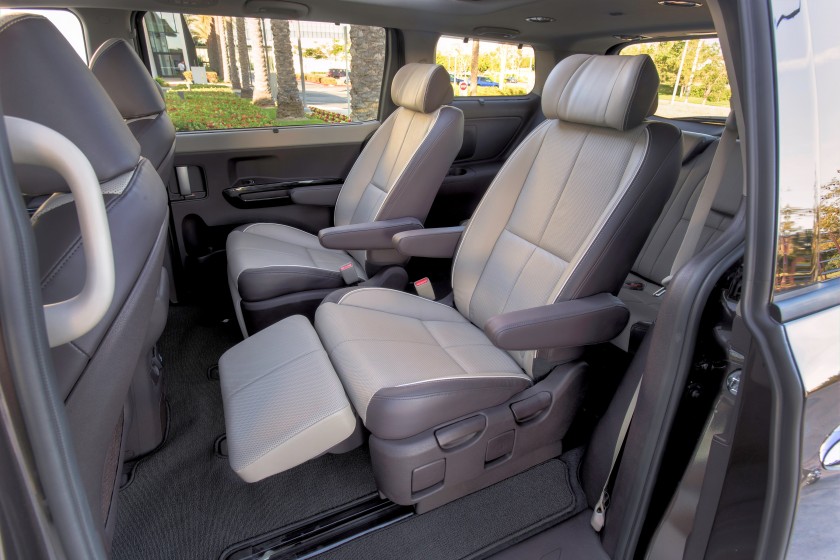 This is the ingenious Slide-N-Stow seating that was introduced with the 2015 Kia Sedona. It takes one push on the lever to make the seat pop into position, then you can slide it up and out of the way. This means no more trying to figure out what to do with your seats those few times when you need to remove them or get them out of the way to move something bulky or huge. The middle row is 40/20/40; the middle seat can be easily removed if you want it gone, and it is small enough to store inside the minivan (over to the side) or on a shelf in the garage if you really need the space. 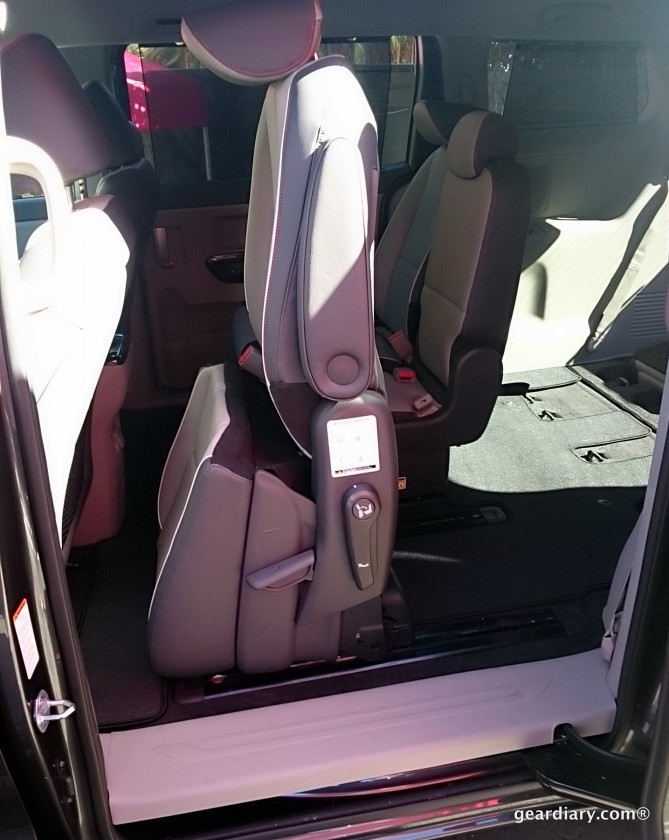 Let’s talk about the third-row seats for a moment … they truly are the red-headed step-children of the auto world, aren’t they? Everyone wants to say that they offer them, but no one wants to offer third-seats that you’d actually be willing to ride around in.

Here’s the deal with the Sedonas; while they still aren’t going to be the seats that adults will fight over, they are much less uncomfortable than usual because of the simple addition of something so “smacks your head” obvious that it’s a wonder every automaker isn’t doing this. What am I talking about? 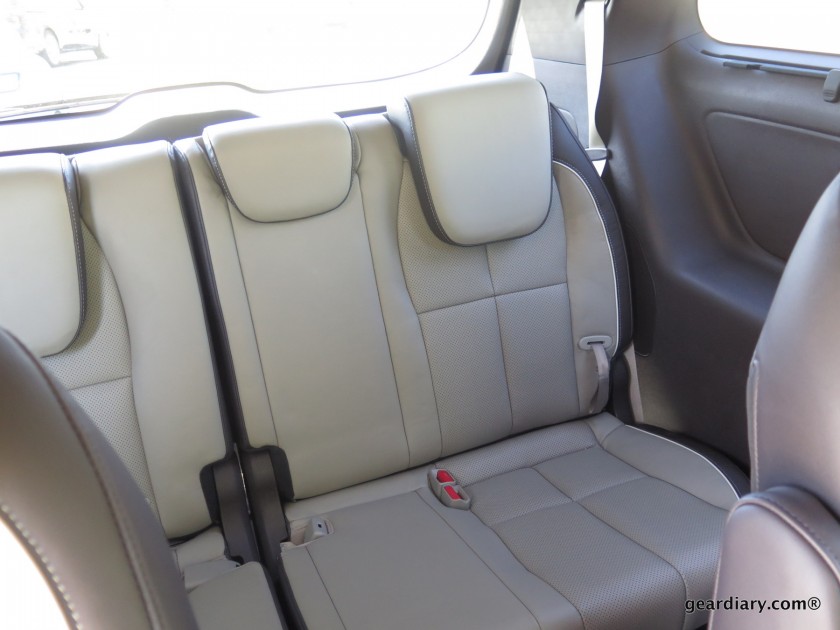 You can see them in this picture, can’t you? They are heel wells! Sooooo simple and so obvious, yet I can’t think of another car off the top of my head that has them. Can you? My GMC Denali’s third row seats certainly don’t have them! 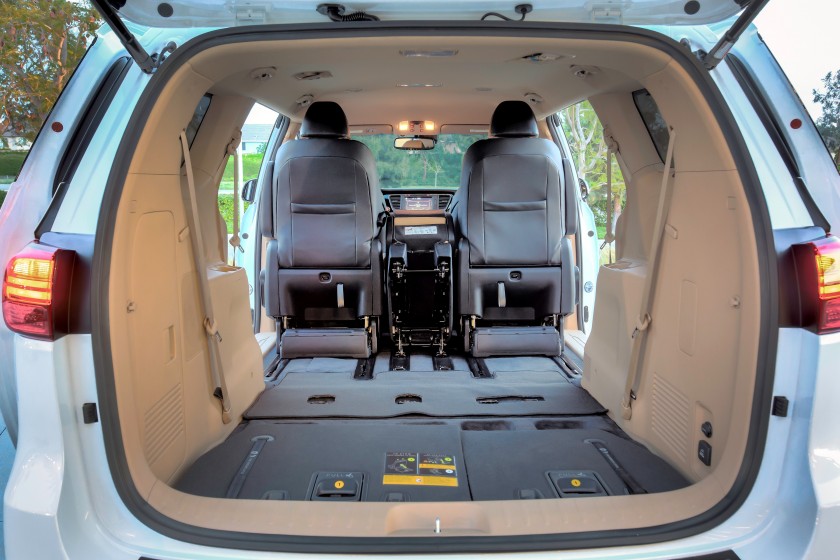 While we are here, look at all that cargo space, would you? Notice how the third-row seats fold flat so beautifully? While we are looking inside that raised Tailgate, I should mention that Kia did something interesting here. For a long time many SUVs, CUVs, and minivans have offered power tailgates, but you had to push a button to get them to open. Sometimes that means your arms are full and you have to fumble around a little bit to press a button. Well, not any more.

If you have a 2015 Kia Sedona with the Smart Power Tailgate, if you are standing by the back of your tailgate with your keys in your pocket, it will figure that you’d like your tailgate opened, and it will open up for you. If you don’t want it opened, then you simply step a few feet away. I’m not sure yet if this is one of those things I would absolutely love or if it would wind up being bothersome, but considering how many times I have dropped my keys with my hands full, right now I am leaning toward love. I’d need more time with it to be sure, though.

Kia has added significant upgrades and updates to premium materials and technology, but that’s just the beginning of the story. Getting behind the wheel is like entering the cockpit of a jet. The interior is very driver-centric. The cluster is angled so that everything is right where the driver can immediately see it as needed, and controls are easily within reach — either right on the wheel or nearby. 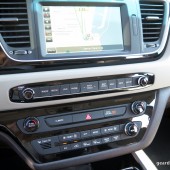 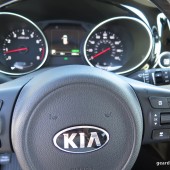 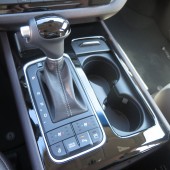 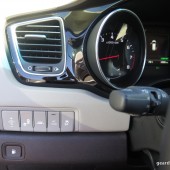 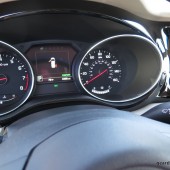 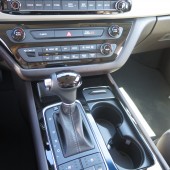 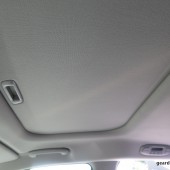 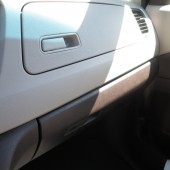 There are two glove boxes — an upper and lower. 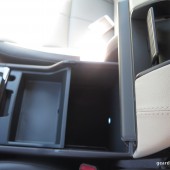 The middle insert comes out, and a LARGE bag or purse can fit inside the middle console

The 2015 Kia Sedona has an athletic stance; it is sitting “proud and strong” on a foundation of great wheel spacing with aggressive lines that are very close to what you would see in a CUV. There are luxury touches including Xenon HID headlamps, Halo LED positioning lights, and 19″ wheels. The Sedona has a “proud, strong CUV face that you usually don’t see in this category”.  So in other words, you can drive a good-looking vehicle but still have practicality; isn’t that what we all want? 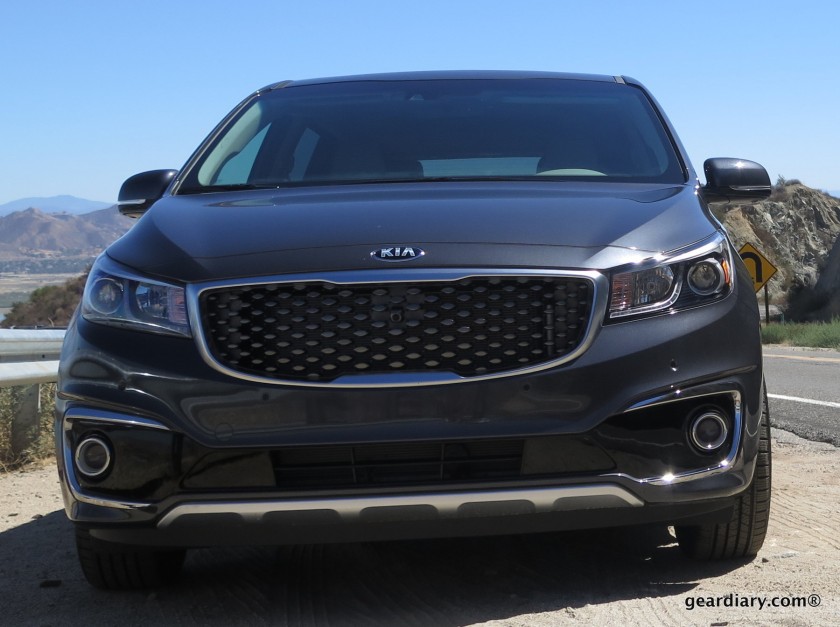 The Sedona will go to market with five different trim levels, starting with the L at $25,900 — the same price as their outgoing vehicle. The 2015 Kia Sedona SXL that I drove had a 3.3L DOHL GDI CVVT V6 Engine and a 6-speed automatic transmission with Sportmatic. It was completely loaded out with a Harman Infinity surround sound audio system,  UVO eServices with premium Navi and backup camera, and Sirius satellite radio. It had the Napa trimmed seats, the First Class lounge seating, Fold-In-the_Floor third row seats. remote keyless entry system, dual sunroofs, smart power tailgate, front & rear parking assist system, the Xenon HID headlights, lane departure warning system (LDWS), forward collision warning system, surround view mirror, and smart cruise control. Base price was $39, 700, and with the extra installed equipment (including delivery) it costs $43,295.00. Fuel economy is rated at 19 MPG, with 17 in the city and 22 on the highway. 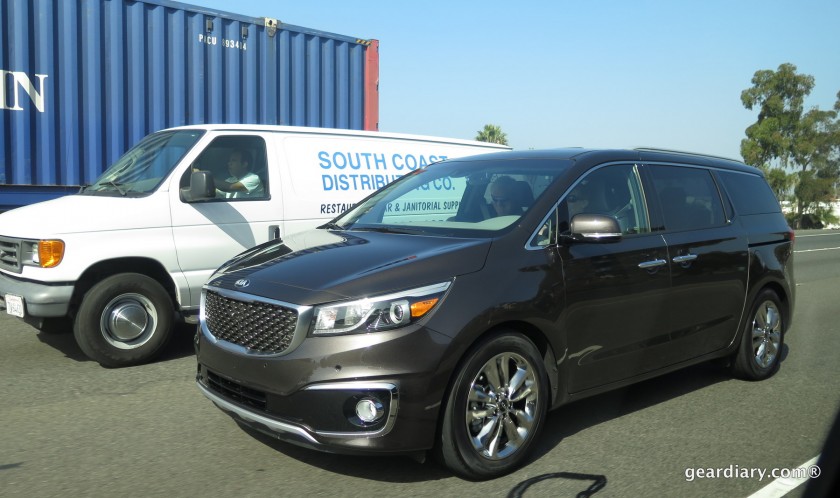 The latest generation UVO infotainment system now has a geofencing feature which allows parents to set it alert them when the vehicle goes outside certain geographical parameters. It will also send alerts if the vehicle goes over a certain speed or if it the vehicle is used after a certain time. In other words, this is the vehicle that you want to send your young driver out in if you need a little extra peace of mind — and there is nothing wrong with that! I found that the 2015 Kia Sedona turned on a dime and drove more like a car than like a family wagon, so it’s not only easy to drive, it will help you hold your young driver accountable.

We were told that the minivan market has dropped over 53% in the last 10 years. Based on some of the minivans I remember seeing on the road over the years, I can’t say that it’s any big loss, honestly. But there are lots of reasons why you might want a vehicle that can hold more than just you and your spouse; grandparents are buying these so they can carry the whole family when they are together, people with big dogs are buying these so they can carry their fur-babies, and others just like the freedom of having a bit more room. It turns out that “almost half of the buyers in this category don’t even have children at home. They like the utility, they like the size and they like the space.” I get that.

Whether you call it a multipurpose vehicle, a minivan, or just a good-looking car, the 2015 Kia Sedona is a vehicle that I wouldn’t mind driving. What about you? 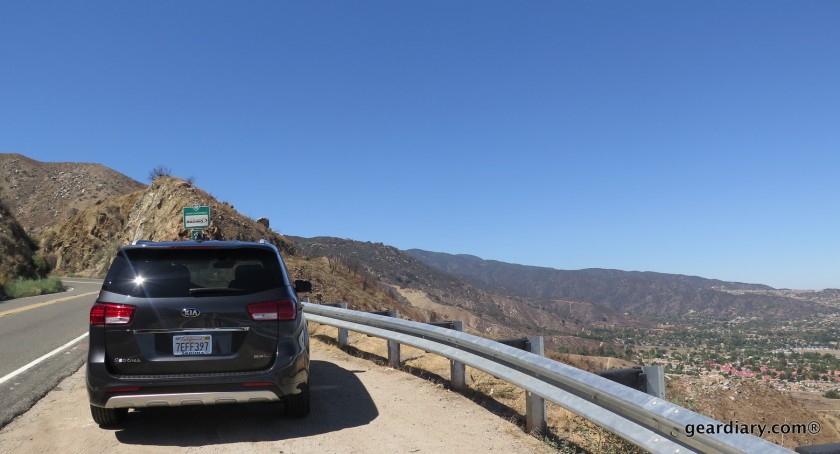 Disclosure: Kia paid for my travel, room, and meals; there were no conditions or expectations made regarding what I chose to write about with regard to my experience.