Developed by Avalanche Software and published by Disney Interactive Studios, Disney Infinity 2.0 unleashes the Marvel Universe into the gameplay based on playsets, discs, and set pieces all physically placed on a base pad so players can put characters directly into the game with free gameplay options in digital versions.

Only the original Disney Infinity game set pieces (46 total) are not backwards compatible in this new version — though they will unlock all associated toys — everything else can be used in 2.0! It’s a great, considerate, and inevitable reality in a very deep and invested (money and time) game experience.

The console versions of the game include the PlayStation 4 (this review), PlayStation 3, Xbox One, Xbox 360, and Wii U plus handheld PlayStation Vita console. No Wii or 3DS versions this time as the previous first installment (previous Wii version can be downloaded on Wii U for free). The free digital versions are available on PC, iPad, Windows 8 device and iPhone (coming soon). As before, players get web cards with each purchase character that contains a code to unlock free digital character at Disney.com/infinity.

Heroes and villains. Sorcerers and superheroes. Princesses and pirates. For generations, Disney storytelling and Marvel adventures have sparked our imaginations with characters and worlds of magic, action and adventure. Now, Disney Infinity invites you and your family to enter those worlds in-game experiences only Disney, Marvel – and your imagination – can bring to life.

Developers create a high amount content and experience, which players can expand even more by building (and sharing) their own elements, so, as in the first installment, it’s like having two games in one. One to two players can play local while developers offer two to four players in network play (online play is optional). Players need 18 GB minimum on the hard drive to install this PlayStation 4 version of the game. 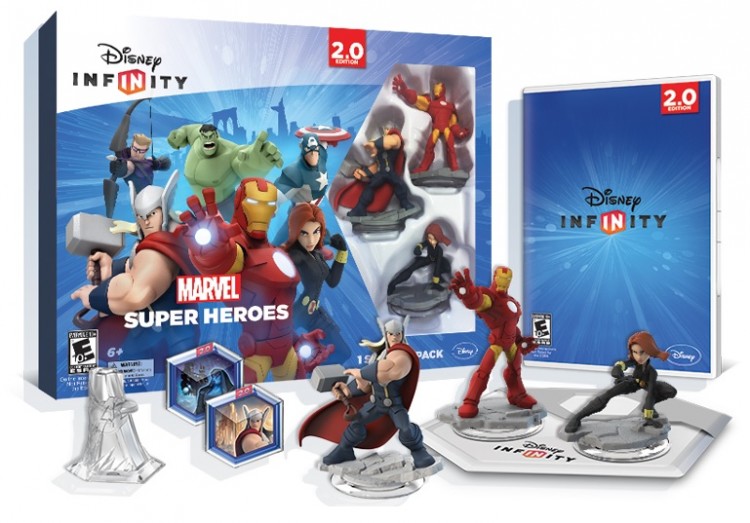 The initial play sets (three total) include The Avengers, Spider-Man and Guardians of the Galaxy as the protagonist heroes battle the evil plans of Loki, Green Goblin, and Ronan respectively. 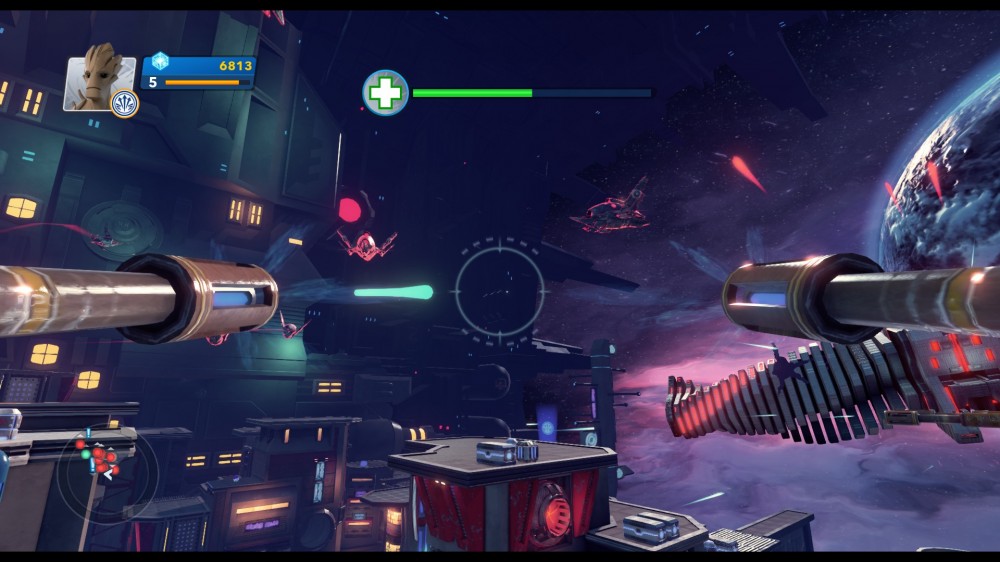 The play set storylines are nicely bolstered by award-winning Marvel comic writer Brian Michael Bendis. Players can always discover new elements and the extra objects (e.g. gun turrets) increase the action to epic proportions along with the enhancing visuals that have clear design to help navigate players. Developers guide players to missions (follow icons) or just let them explore the open world and discover goodies throughout the environment.

The stories intertwine and so do the characters (e.g. Iron Man and Nova cross all three Marvel play sets). The Avengers play set includes the base pad, but the previous base pad works in 2.0, so players aren’t forced to purchase a new one. 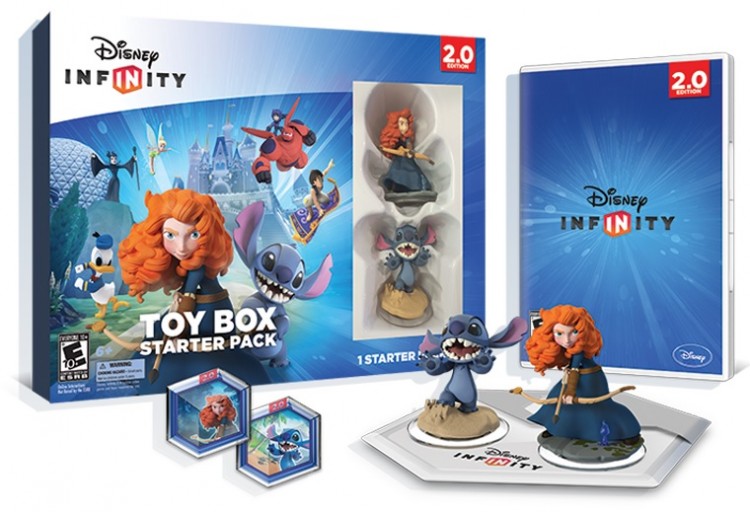 A Disney starter play set will also release on November 4. The only exception is for the new Xbox One console where players will need the Xbox One base pad (the previous Xbox 360 base pad will not work with Xbox One).

Players complete missions in the play sets to unlock Toy Box content, which include endless pieces and game elements. Creation tools abound in the Toy Box mode where players build their own levels and even mini-games. Creator tools, Builder characters (e.g. King Fergus and Lewis Robinson) and templates are a welcome addition. Players also get a challenge maker, toy box game maker, text creator (it’s filtered, so don’t even try anything inappropriate) and more than 75 Creativi-Toys.

Content enhancements include the ability to import toy boxes into the 2.0 version with doors (a la Monsters Inc.) used to link toy-boxes and other levels together. 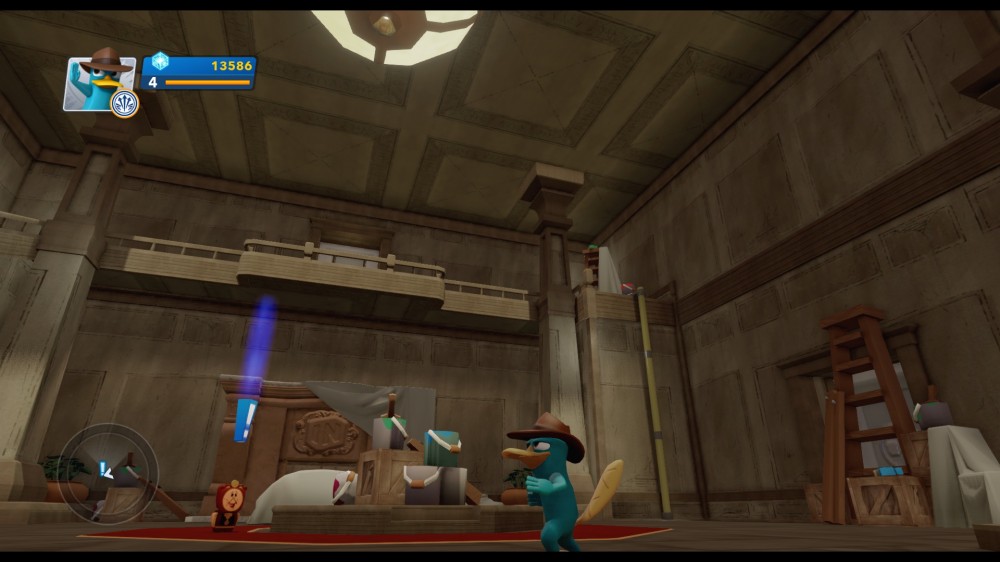 The My INterior mode gives players more places to explore and decorate (e.g. furniture and various theme related objects). When players want to purchase toy box pieces they get direct buying power and won’t have to encounter the random spin wheel anymore.

Players can share their constructed toy boxed with Disney account friends (even when they’re offline) or make them public for everyone in the community. Players can access their own Toy Boxes across all available platforms, so that invested time never goes to waste…as long as they’re saved – maximum of 300 Toy Boxes using private cloud storage with up to 100,000 toy boxes for download.

Online features in the Community Content mode allow players to download other constructed toy boxes and content. The new newsfeed screen provides a nice overview for players and players can like favorites, search categories, and perform filtered searches

The new power discs have Marvel pictures on them plus “2.0” text banners at the top to distinguish them from the first Disney Infinity game installment. 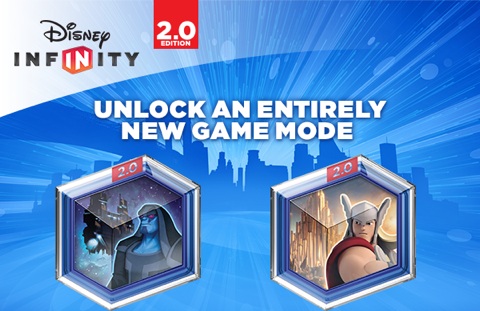 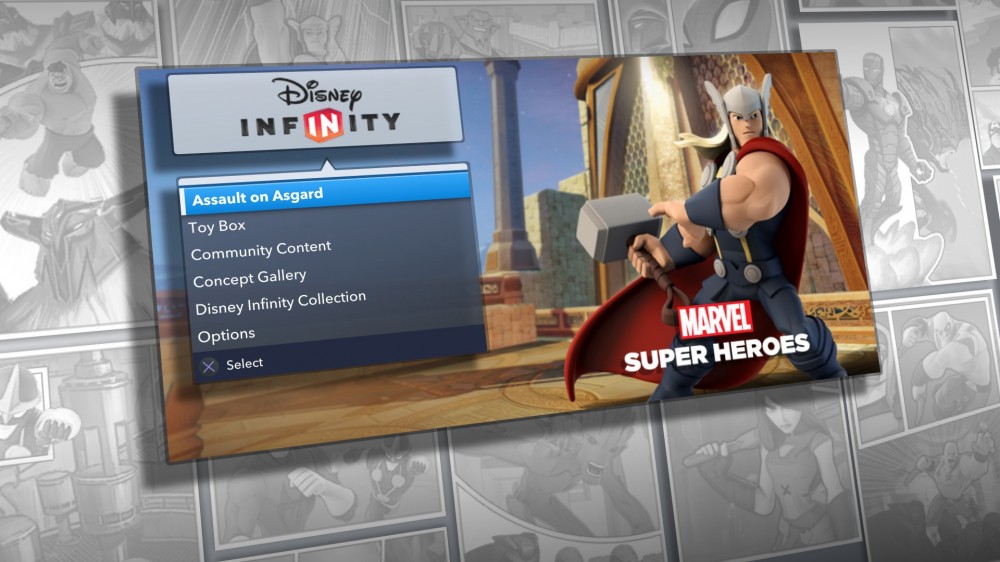 New toy box game discs contain toy box games involving tower defense and dungeon crawling that can be played when setting the disc in its rightful slot (top middle of the pad). These color-tinted discs have a physically raised pyramid shape, so players know they cannot place a set piece on top of these discs. Players will probably have to turn the pad upside down to get them out as well since they fit very snuggly in the hexagon slot.

The power discs involve costumes, vehicles, environments, team-up, events, and special powers, but can only still be purchased in the foil packs instead of individually, so it will be difficult to collect all 59 set discs (hexagon-shaped) and 25 power discs (round) without having duplicates. The duplicates make the collecting and trading aspects, but it would be nice if players had the option of buying them individually in clear packaging so they know what they’re getting. Note: There were 17 round power discs from the first Disney Infinity game.

The characters are the main focus here and can reach up to Level 20 skill level…that’s every character even mainstays from the first Disney Infinity game (37 total). All characters (enemy or hero) are “KO’d”, so they don’t die or permanently leave the game. Characters have familiar actions within the amazing worlds and they can interact with various objects. Each character has a skill tree where players can expand skills using acquired points throughout gameplay. Skills areas are speed, ranged attacks, melee attacks and healing. 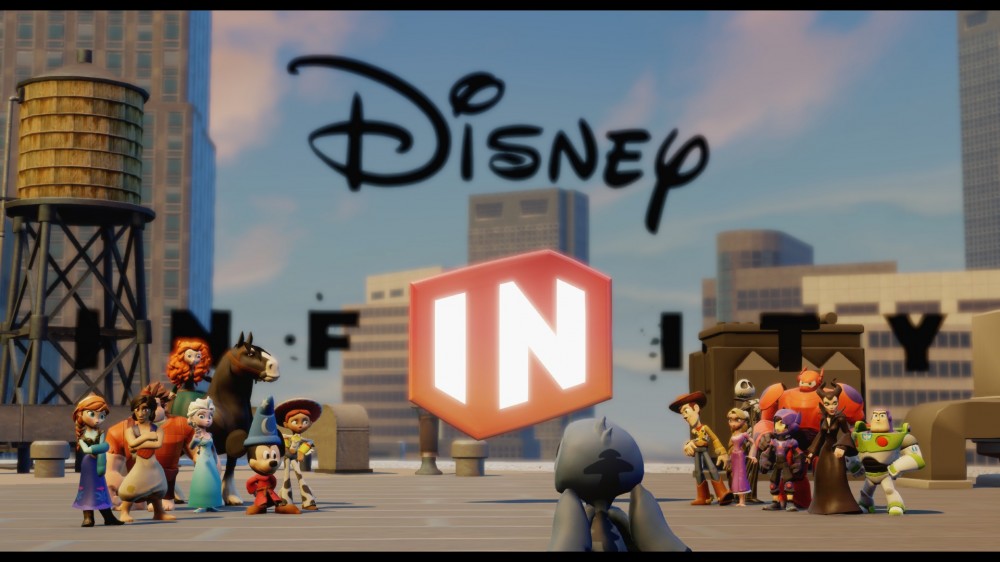 Players can boost their character powers with unlockables and various items like sparks, which are acquired from breaking objects. Purple sparks increase a character’s special abilities while orange ones boost power.

Spider-Man gets the same open world movements and web slinging as in the non-Disney stand-alone video games, which is a great plus. Players can also get some original voice talent for the characters like Samuel L. Jackson for Nick Fury, but most are unfortunately missing-in-action. 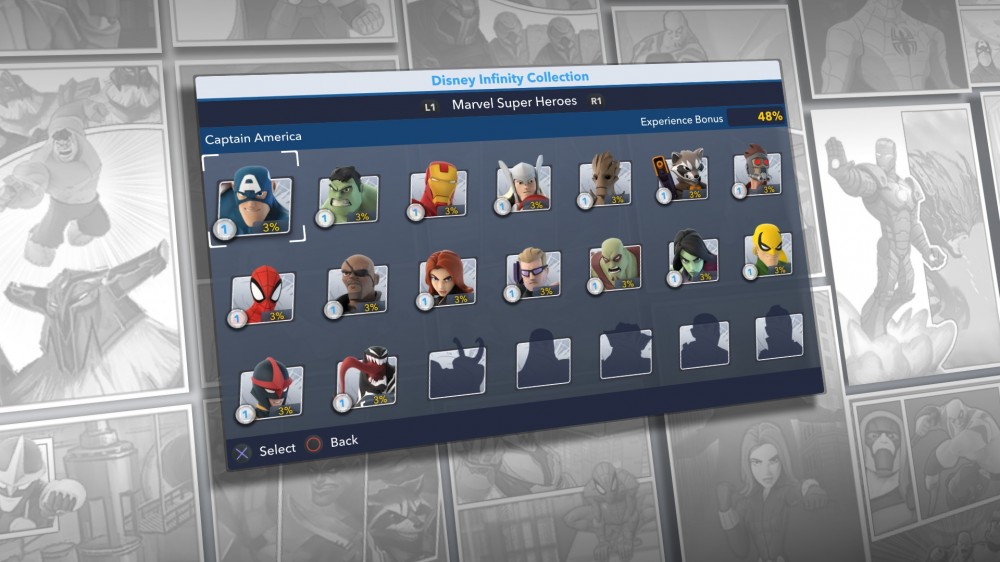 Players can easily track characters and discs across both Disney Infinity installments in the Disney Infinity Collection mode. The other collection-type mode, The Hall of Heroes, now also has an additional Hall of Super Heroes.

The concept gallery displays elements once unlocked. Players can always adjust volume of music, effects, and dialogue. The control options only allow inversion options instead of additional button assignment and other customization options. Players can also link/unlink to their Disney account, reset figures (still retains progress of other owners) and change the difficulty (easy, medium or hard). 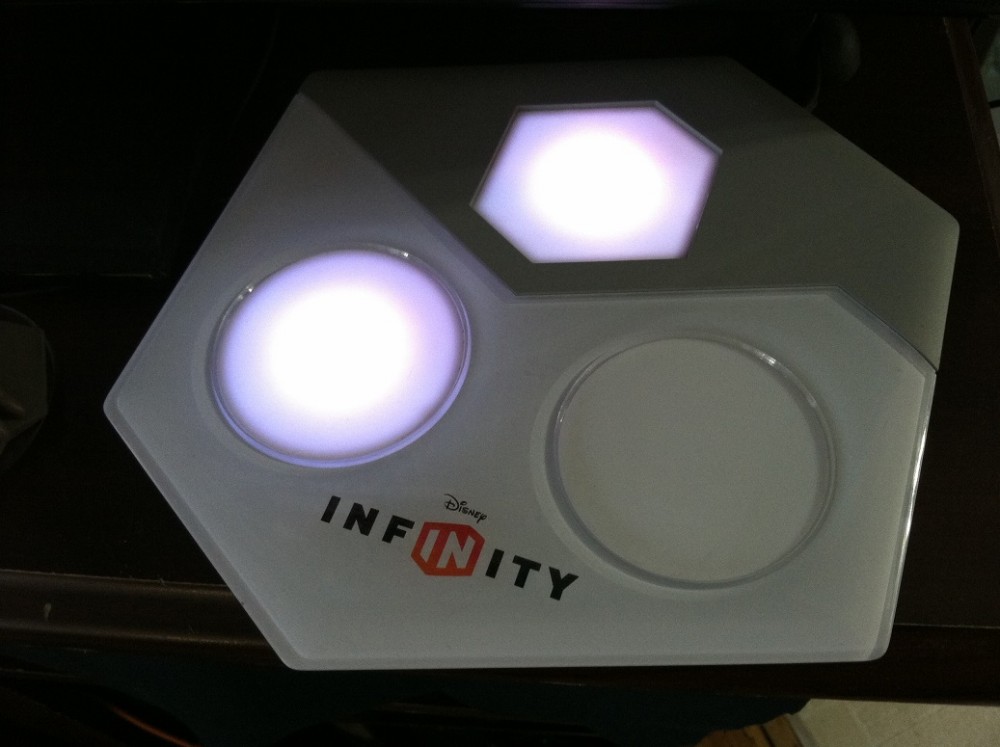 The tutorial materials works for all player age levels with help in the game and on the hardware (e.g. the pad will light specific slots where players need to place pieces. Players always can use text and audio hints plus video tutorials (keep those subtitles on for younger players).

Also available on PS3, Xbox 360, Xbox One, and Wii U plus available for free download on iPad, iPhone (coming soon), Windows 8 device and PC. It retails for $74.99 for starter packs (includes game), $34.99 for play set adventures, and $13.99 for character figures (Best Buy, Amazon and other stores)