I use my Chromecast nearly every day to watch YouTube videos and more. The one thing that has not been as easy as I would like has been watching my own videos. That has now changed with Toshiba’s new Canvio Aerocast wireless hard drive, which has very good Chromecast support. Now you can watch almost any video on your Chromecast. 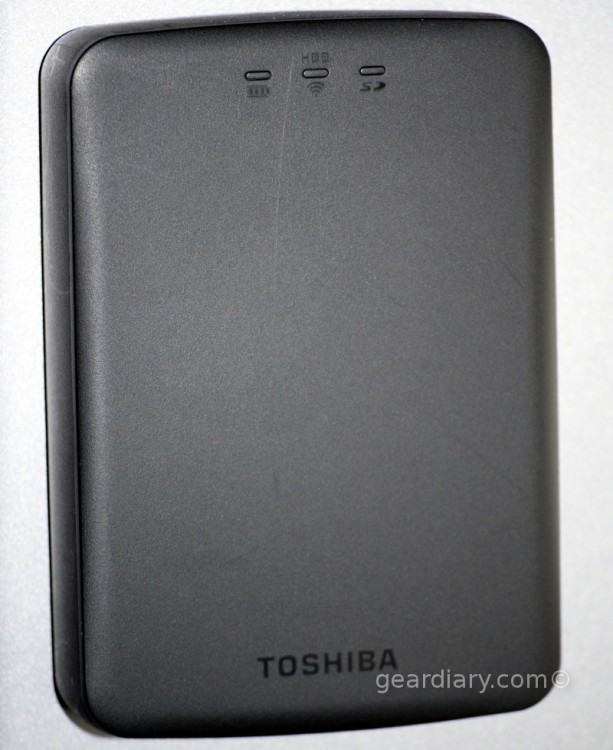 Storage seems to be getting cheaper every day.  My phone has 32 GB internal storage and a 64 GB MicroSD card adding up to 128 GB in my pocket; unfortunately that isn’t always enough.  I’ve been thinking about adding a wireless hard drive to my collection of storage for a while, and when the Canvio came up for review I jumped at the chance mostly for the storage, but also for the Chromecast and SD card slot.

The Toshiba Canvio Aerocast is, at its heart, a 1 Terabyte USB 3.0 USB drive, but it adds WiFi and an SD card as well. Setting up the hard drive is fairly easy, but I must note that in the box were NO paper directions and there was no PDF file on the drive itself telling you how to accomplish setting it up.  I had to go to Toshiba’s website to figure out which application I needed and how to proceed. Luckily, the videos on the Toshiba website were very helpful, and I was up and running quickly.

To get set it up, you just turn on the drive by pressing the only button on the drive for a couple of seconds.  When the drive finishes its power up, using your phone or tablet, you’ll look for a WiFi network called “Toshiba whdd FDBB”. Out of the box, this network is also secured with WPA encryption with a password of “123456”. Once connected, you can change the configuration of the drive using the “Toshiba Wireless HDD” application on Android or iOS. You can also change the password of the network, or connect it to your network in station mode so that you can use the Chromecast functionality.  In either station or bridge mode, you can access the internet at the same time as you do content on the Canvio Aerocast.  This is much better than many of the first wireless hard drives. Many of those only let you stream video or access content on the disk and cut you off from the internet. You can, of course, connect to ONLY the drive without internet, which is convenient while on the go.

With the Canvio Aerocast, not only can you access the internet, but you can also share content already on the drive to Facebook, Twitter or e-mail, which is very handy.  Although, I tried sharing an image to Facebook from the drive and it seemed to want to send it to Facebook Messenger rather than post it to my timeline on Facebook.  I do not know if this is because of the size of the image or why this is.  Twitter integration worked without issue.  Using the email sharing seemed to pull up a truncated version of the standard Android share dialog with only apps like Gmail, Google Drive, Evernote and other apps that can act like e-mail apps.  Personally, I wish the Android version of the app just used the built-in sharing mechanism many Android apps use.

Back Your Stuff Up! 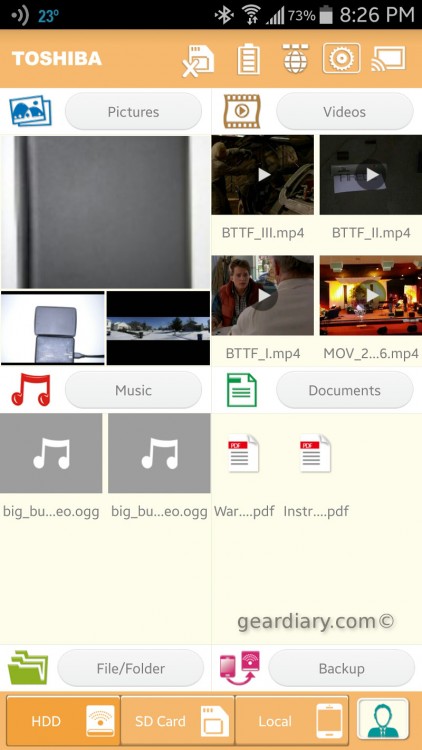 The drive also has a backup function that can back up your device or any SD card plugged into the drive’s SD card slot.  Backing up your device seems to be a bit sketchy at best.  It worked great on my Galaxy Note 3 to back up the internal storage, but because the Toshiba app doesn’t seem to be able to access the SD card on my phone — that’s all it backs up.  This isn’t a problem with the drive, but rather a relatively new issue with any Android device starting with Android Kitkat.  Some apps work fine with the SD card like the default camera app, but others don’t.  This is purely an Android issue.  My Nexus 7, which is running Android 5.0.2 (Lollipop), did not seem to back up the device at all; I was able to send files from the tablet to the drive so that works.

The SD card backup feature was my favorite. To test this, I took some pictures with my Nikon DSLR and popped the card out to back it up.  When I backed it up the first time, it gave me the option to back up to a user folder as soon as the card is plugged in.  This works even without the app connected.  When you pop the card in when it’s setup for this, the drive’s light starts to flash, and when it stops flashing you can safely remove the card.  It does not wipe the card.  You will have to do this yourself using your camera or other device. One last thing about the SD backup feature is that it does NOT support exFAT formatted cards.  That means it will not backup SDXC cards like my 64 GB SDXC card, since it only supports exFAT.  If you have a 32 GB card or smaller, this should work fine for you.

There is some limited usefulness of the drive without the Toshiba app. First, on laptops you can browse the drive like any other network drive via the File Explorer on Windows or any file browser on Linux, the finder on the Mac, and any Android File Browser that supports Windows network shares.  Also, it shows up as a device on Windows as well.  When you click on the device it brings up a rudimentary webpage where you can reset the device to factory defaults, save the drive’s configuration or even change the configuration. There is no security on this page, so I would only use this drive and its page while connected directly to the devices network when mobile or at home.

It’s important to note that when you power this drive up away from home, if it doesn’t detect a WiFi network it knows, then it will turn its built-in network back on so you can directly connect to the drive.  This is very handy and makes it a piece of cake to go away from home with this drive.  You can connect this to your hotel’s network or other WiFi networks when traveling, but I wouldn’t, as you never know who is scanning the network, and there’s absolutely no security on the device at all.

Anyone on the WiFi network can scan the drive, grab files off of it and delete files which is incredibly convenient and dangerous at the same time. My suggestion for Toshiba is to update the firmware allowing you to add at least a password to the configuration page and to get to the drive’s contents over the wireless network.  Until then, I’d only connect directly to the device’s network or to a mobile hot spot YOU have control over like your phone’s built-in hotspot or a 4G hotspot. 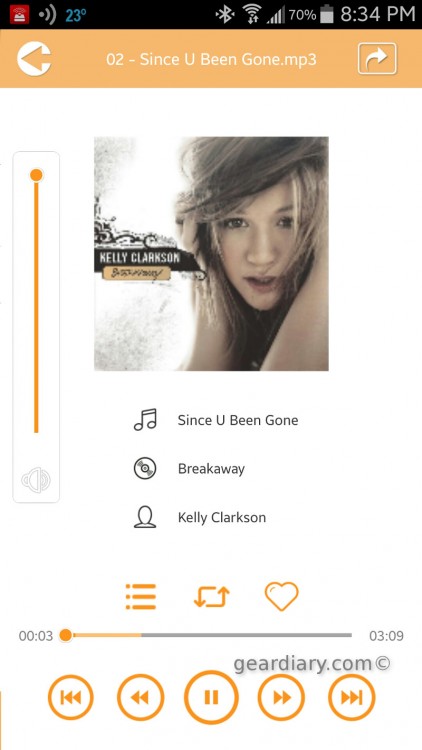 You can stream video to up to 6 users simultaneously in the app.  Just browse videos, find the one you want, tap and start watching.  This worked very well for me and was much less sensitive to the kind of codec on the video than the final feature, streaming to the Chromecast. You can also stream music via the app as well.  Music will not stream to the Chromecast.

This brings us to the last and coolest function and that is the built-in Chromecast support.  To connect to Chromecast, you just tap the Chromecast icon, select your Chromecast, and then it will then negotiate a connection.  I was able to stream many MP4’s to my TV using this however the Chromecast feature is much more sensitive to the codec of the video file than streaming to phones and tablets so your mileage may vary.  To give you an idea of what will stream, I downloaded an episode of This Week in Tech from Leo Laporte’s TWIT network and it streamed to the Chromecast just fine. I also converted some videos I already had on hand using Handbrake and I used the “Normal” mode under Regular and was able to make an MP4 that worked on the Chromecast and streaming in the app.

Finally all of this stuff is cool, but how is the battery life??  It’s supposedly 5 hours.  However if you copy a lot of stuff on and off the drive over WiFi then your mileage will vary. I was generally able to get through at least one movie.  So it should be fine using it on an airplane to stream a movie on most domestic flights. Longer flights will be an issue, though. One thing I did notice is that you cannot have the WiFi  on while charging it at the same time.  I wish you could do that, as you could then attach an external battery to extend the life of the drive, but you can’t. Also, to attach it to your computer’s USB port, you will need to turn off the drive first. Once you do, it attaches to your computer like any drive. I was able to get this working on both Windows and Linux (specifically, the Ubuntu based Xubuntu) without issue — although on both I had to plug it into multiple ports until the drive mounted.  I’ve seen this with other USB drives as well.

The Toshiba Canvio Aerocast WiFi Hard Drive is a most interesting device, and it is available for $149.99 direct from Toshiba..  I like that I can stay connected to the internet at the same time as the storage.  However, I do have to say that the days of a wireless hard drive being shipped without any passwords on the drive should be OVER. Since there’s no password on the drive, I’d only ever use station mode (which is the mode you use for the Chromecast) on your home network or on a mobile network like a 4G hot spot. Otherwise, it’s far too easy for others to browse your data, steal it, corrupt it, or delete it.

What I like: Wirelessly access videos, pictures and other data at home and on the go; send almost any video to your Chromecast.

What Needs Improvement: There is absolutely NO security on the Toshiba Canvio Aerocast WiFi Hard Drive; if it’s attached in station mode, anyone connected to the network can get to your data — which is cool and dangerous all at the same time