Marvel and Disney’s relationship is an odd one that I’m pretty much on the fence about. But I’m appreciative of films like Avengers and Guardians of the Galaxy so I was super excited when they announced Ant-Man would show up on the silver screen. And we now have a trailer to go with it.

After a teaser trailer during the MTV Movie Awards earlier this year, Disney released a full trailer this week with Paul Rudd, Michael Douglas, Evangeline Lilly and Corey Stoll playing Yellowjacket. Set to hit theatres this summer July 17th as a follow-up to Avengers: Age of Ultron, which will be released globally on May 1st, Ant-Man will even bring along new characters like Howard Stark, Tony Starks father.

According to our friends over at I Watch Stuff:

While Avengers: Age of Ultron has been building up a massive, world-scale battle, Marvel’s July follow-up now has the issue of quickly bringing things down to a model train H0 scale. This first full-length trailer for Ant-Man gets straight to that with some extremely small battles (including one on a train set), light-hearted self-awareness, and yes, ants. Also introduced: Corey Stoll’s Yellowjacket, the shrinking foe that carries on the Iron Man and Incredible Hulk tradition of the first villain being a very obvious analogue for our hero. Best not to complicate things where a tiny Paul Rudd communicating with bugs is concerned. 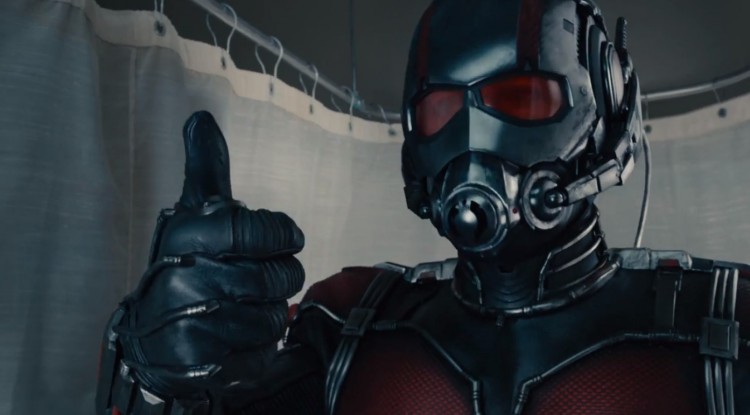 This is one of the five films I’m super excited for. There are rumors that either Avengers or Ant-man will host the trailer for the Batman Vs. Superman movie as well, so I know I’ll be in the theatre the night it comes out. Are you excited?