When we first moved into our house, we debated signing up with an alarm company. Ultimately we decided against it after looking at how much a contract would cost, but I’ve been following the smartphone-based alarm systems closely. We’ve been testing the SkylinkNet Alarm System starter kit; so how does it fit our needs and protect our home?

SkylinkNet sent us the starter kit, which consisted of the hub, two sensors, a motion detector, and an alarm fob. They have iOS and Android apps, and for those who aren’t using a smartphone (or want a backup), there’s the key fob. 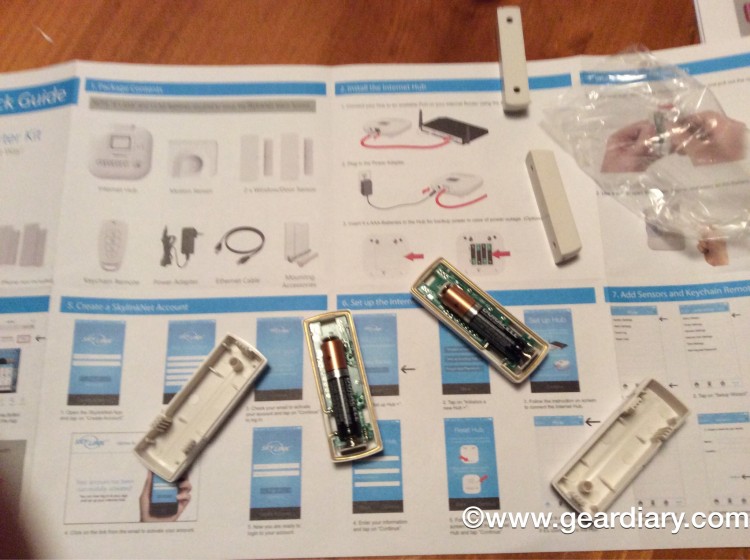 The sensors themselves are quite small and unobtrusive. They clearly look like security sensors, in that there’s a slim portion that sticks to the door frame and another portion stuck to the door, and they notify the hub when they are no longer in proximity to one another. They take AAA batteries, so keep a few lying around (I had to scrounge to find them for ours!) I found their proximity range to be pretty forgiving; on my back door I had to stick one sensor at a 90 degree angle to the other in order for the door to close, and that seems to satisfy the alarm system. They don’t need to be lined up absolutely perfectly, which gives you a lot of flexibility in getting them installed. Installation took mere seconds, as SkylinkNet thoughtfully includes both double sided tape and mounting tools. I opted for the tape, which is 3M and quite strong, and nothing has budged yet. 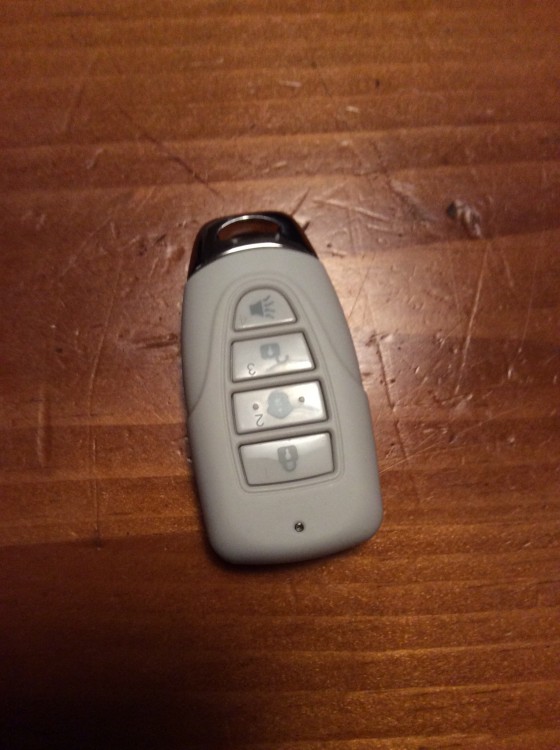 The hub is also quite small, just a little bit larger all around than our Roku 3. It has buttons for arming the alarm, for disarming the alarm, and for arming it when you’re in the house. There’s also an LED to let you know it is properly connecting to the internet, and it takes four AAA batteries as a backup if the power goes out. Obviously, if there’s no power there is no internet, but the SkylinkNet Alarm System sensors and hub can still communicate and sound an alarm as long as the batteries are working. The nice thing is that we can keep it tucked away behind our entertainment unit since it is so small, but if you did have it out it wouldn’t stick out or draw excess attention. It would be nice if it could be set for WiFi as well as ethernet, as that would increase the places you could store the hub, but this is a minor complaint. 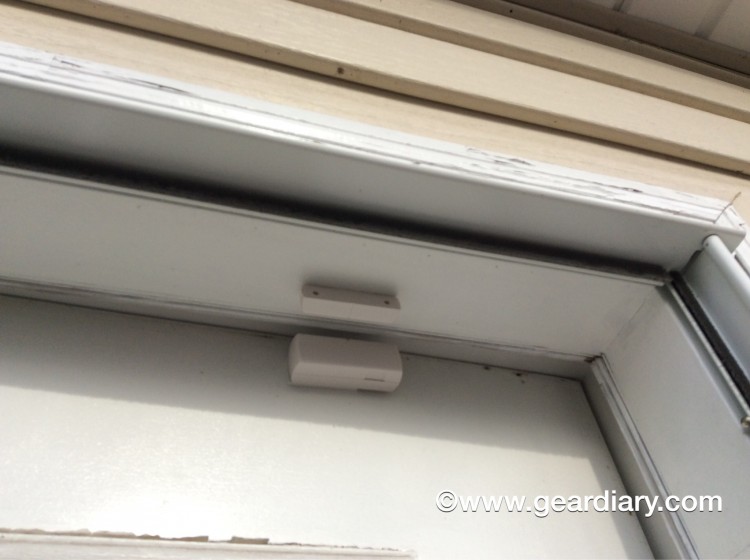 At the heart of SkylinkNet is the app, of course, and they’ve really nailed it. The app is simple to use, very intuitive, and works with both iOS and Android. On both platforms I can activate and deactivate the system, control whether one door is alarmed or both, and be notified every time the door opens and closes. This can be helpful if you’re trying to make sure your teenager isn’t sneaking out, but feels a bit stalkery if you’re being notified every time someone enters or exits your house. Luckily it’s super easy to change how you want to be notified. Just about everything in the app is clear and laid out well. There’s little chance of you accidentally setting off the alarm or mistakenly not arming it. 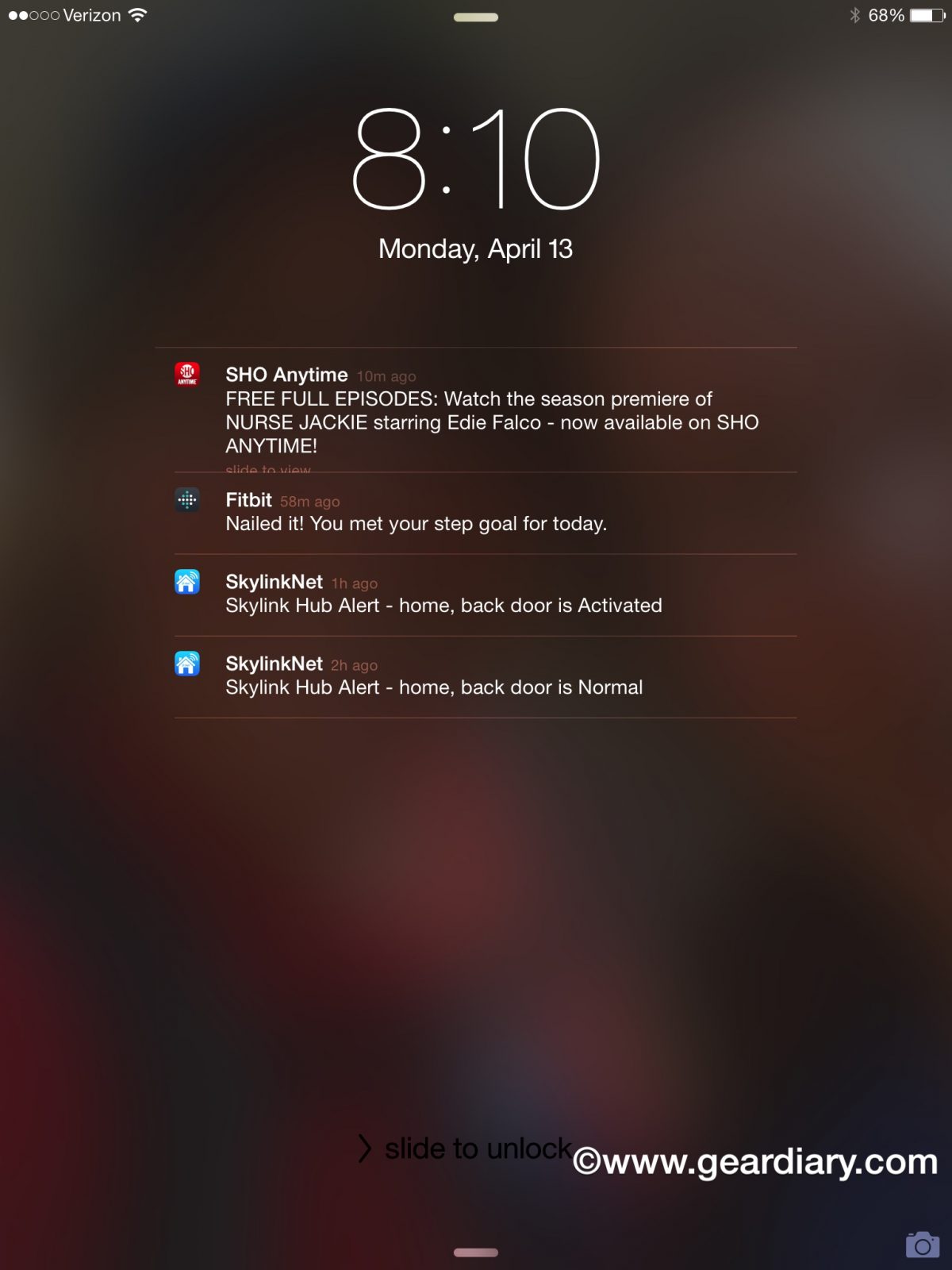 Speaking of the alarm, it is effective and loud. I set it off on purpose to see what would happen, and the hub immediately let off an ear piercing shriek. At the same time my phone and iPad alerted me that the alarm was triggered, as well as which door it was. During all this, my poor dog freaked and tried to run outside, apparently under the impression this was a fire drill. This would definitely startle anyone who wasn’t expecting it, and I am reasonably sure my neighbors would have heard it if I hadn’t turned it off. Basically, it did exactly what you would want an alarm system to do. 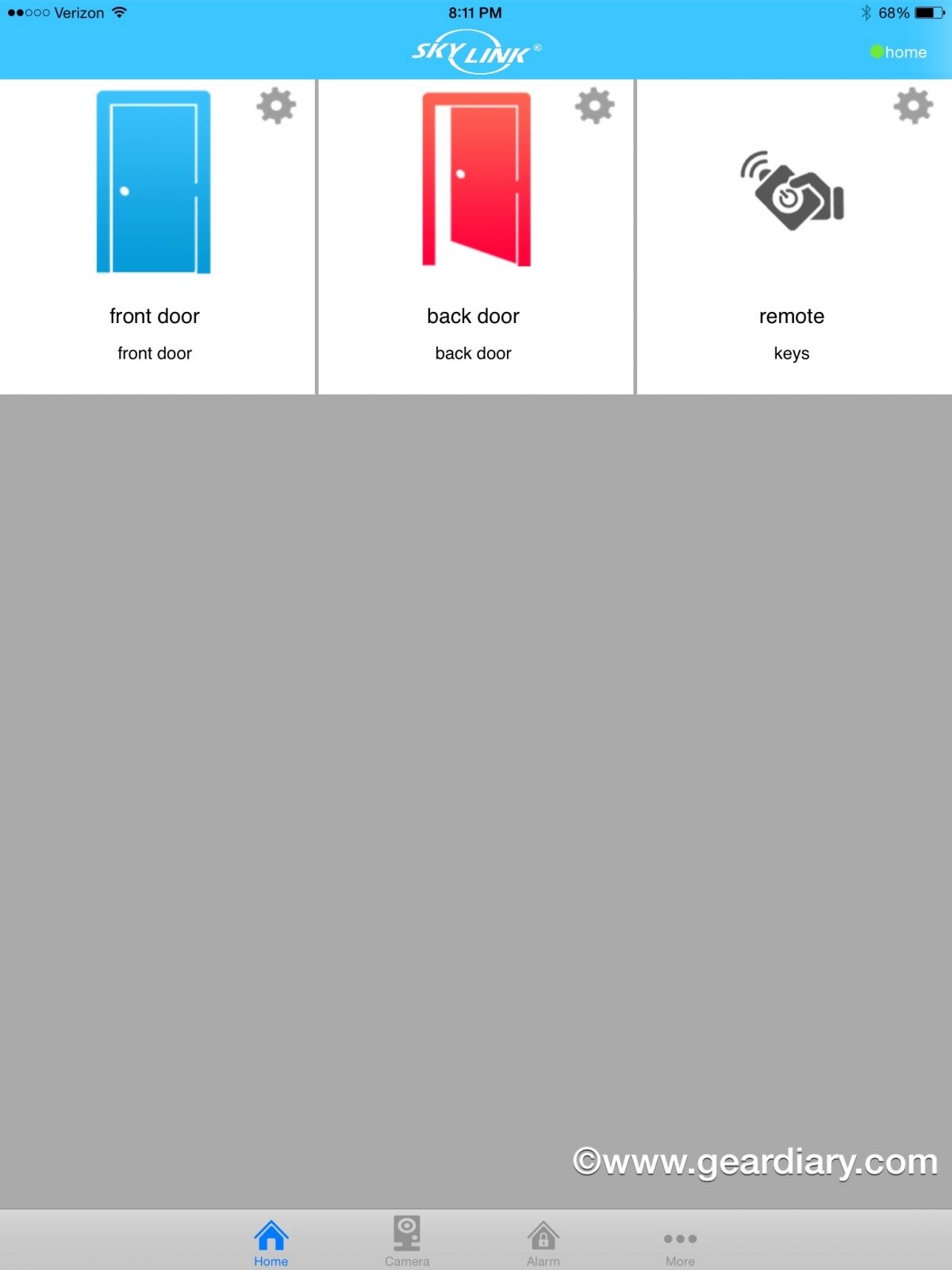 Now, the big difference between the SkylinkNet Alarm System and, say, Slomins or ADT, is that you don’t get a third party offering 24/7 monitoring. If your alarm triggers, you will have to call the police yourself. At the same time, if you’re near your devices fairly often, being able to do your own monitoring can save you a significant amount of money over time. SkylinkNet starts at $149.99 for the starter kit (which is what we received) and you can add webcams, extra sensors, and even an auto dialer that will call up to nine numbers with a message that your system was tripped. 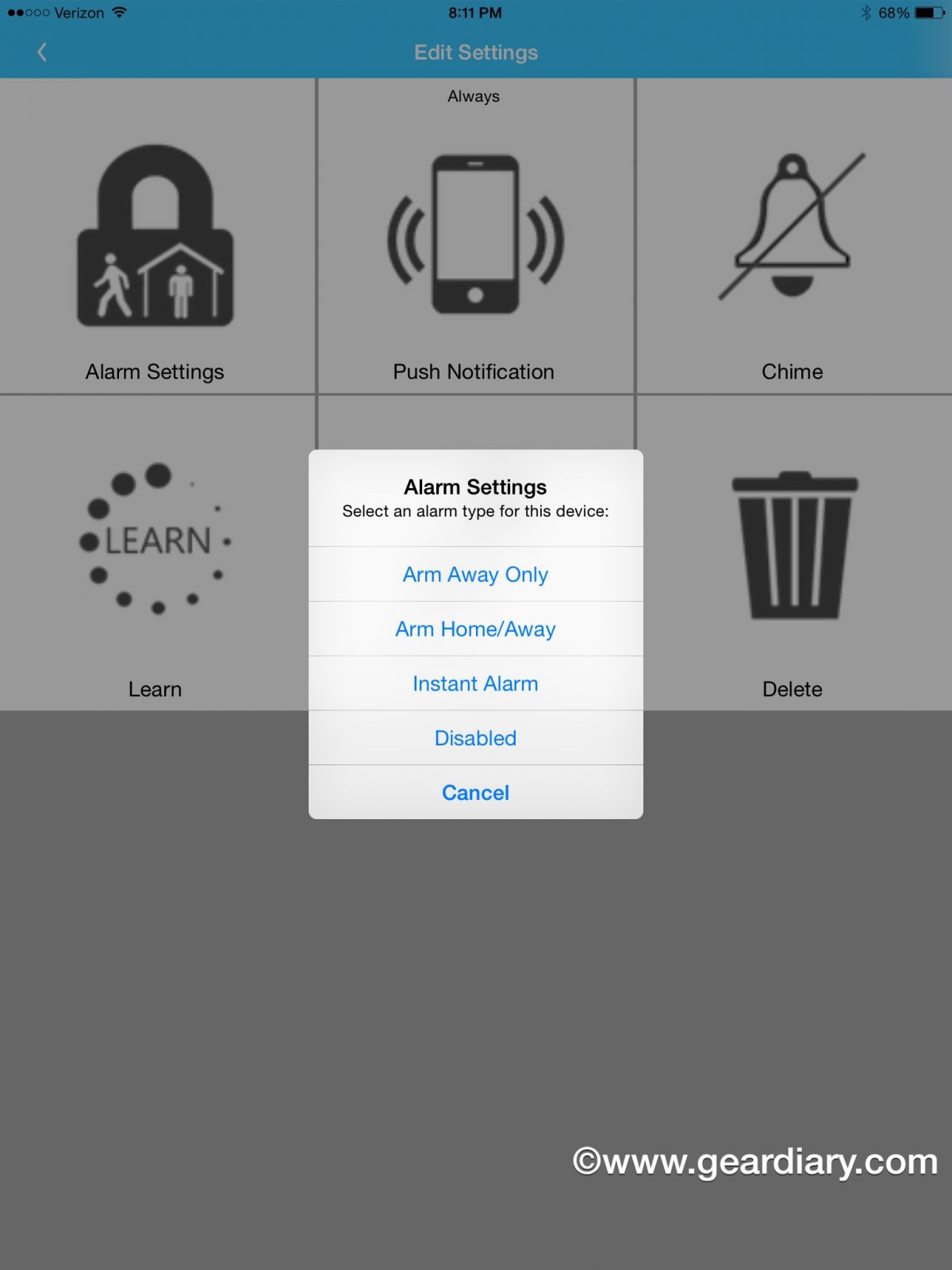 All this means you can spend a little for basic protection, or spend a lot for more peace of mind, but with the SkylinkNet Alarm System you have complete control. The system is super easy to learn and use, it works across multiple platforms, and can be customized for any budget and home size. If you’re worried about home security, put SkylinkNet at the top of your list!

What I Liked: Incredibly easy to set up; app works smoothly and with multiple alert options; interface is easy to learn; alarm is loud; great expansion options; no monthly fees