Don’t look now but frenemies Google and Twitter just said that starting today “U.S. users searching in English will see relevant Tweets in their search results within the Google app (iOS and Android) and mobile web“.  First announced back in February 2015, this deal appears to finally be getting underway. Look for results on mobile right away then desktop. 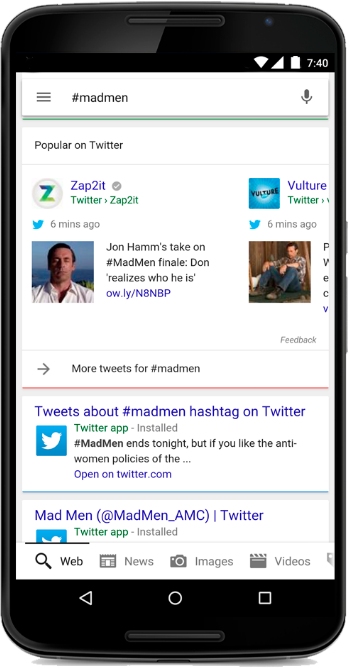 A quick test on Android uncovered several searches for popular celebrities, returning Twitter content several lines down from the top result. Searches for non-public figures aren’t yet giving me any type of Twitter feed. Perhaps the algorithm will be tweaked over time.

The last time live Twitter results were viewable in Google was beginning in 2009 with Google Real-Time Search. That effort fizzed in July 2011 and since then Google has not had a complete set of real-time Twitter information to present within search results.