WARNING: The products discussed may contain or use nicotine. Nicotine is an addictive chemical; in many cities and a few states, you must be 21 to purchase vaping products or products containing nicotine. Please familiarize yourself with and obey the law in your location.

Captain’s Log, Stardate – June 11th, 2015 –  We have entered a new era of vaping. The Joyetech tribe has unveiled a game changer. The Joyetech eVic VT, a new standard in mass-produced vaporizers. Ok, jokes aside here, Joyetech has outdone themselves and they have released my favorite mass-produced device to date.

On July 11th, I received my favorite device, aside from my high-end custom box mods, from Element Vape and I bumped it up past 4 other devices in my review queue to share this one with you.

I don’t think I am going out on a limb when I say that the eVic VT is a game changer. 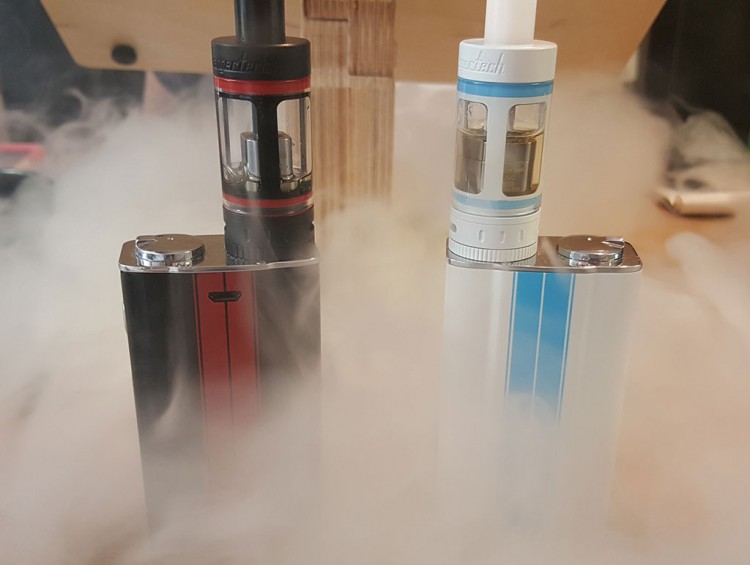 The eVic VT in black and white with matching Kanger Subtank Minis that DO NOT come with the starter kit.

Presenting the eVic-VT 60W, its new cutting edge technology of temperature control, embodying the concept of a healthy alternative lifestyle. eVic-VT features a super large OLED screen, supporting VT-Ti (Titanium)/ VT-Ni (Nickel)/ VW mode, and battery capacity of 5000mah. The Variable Temperature (VT) brings out a different flavor experience with the change of temperature settings, not only improving the taste,but also saving battery and liquid consumption. eVic-VT is not your typical vape, it’s an evolutionary start.

The eVic VT comes in a white box with a picture of a faded looking orange version. It doesn’t really look like any of the actual colors that are available but that’s no big deal since the three colors available are listed on the back with a check mark to indicate which color is in the box. On the back, there’s a list of the contents and a brief description of the device. 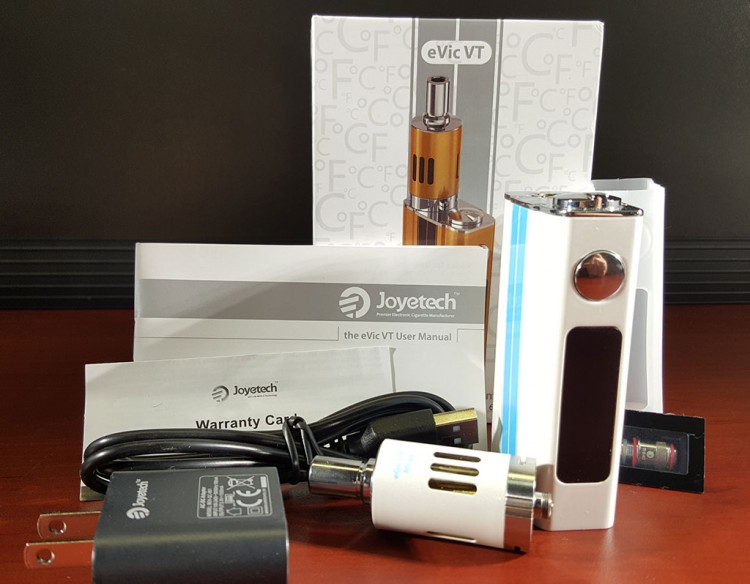 Here’s what came in the box. 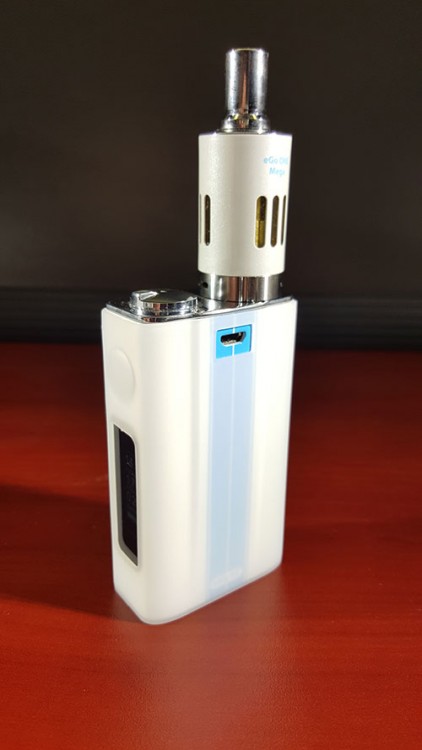 Here’s the silicone sleeve that comes with the kit. I think the sleeve is useless. It seems to protect the device nicely, but why cover up such a beautiful mod. 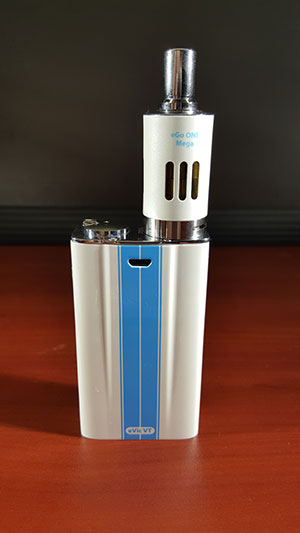 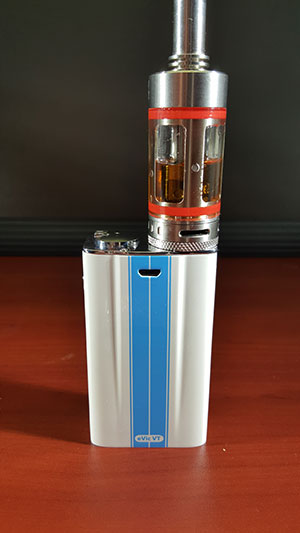 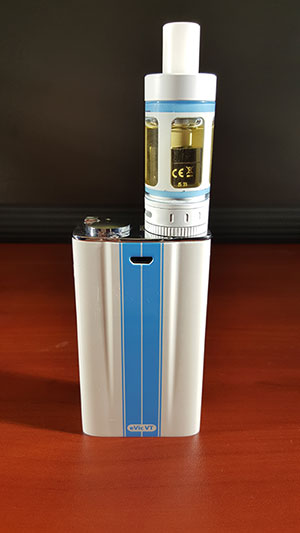 The Joyetech eVic VT feels like a high-end device, but has a mid range price tag. Just like the Joyetech eGrip, there is no doubt you are carrying a device made of high quality metals. The device is solid and there is nothing rattling around inside or out. The single button is pretty solid feeling and the overall feel is high quality. The paint job seems like it won’t chip or scratch easily. 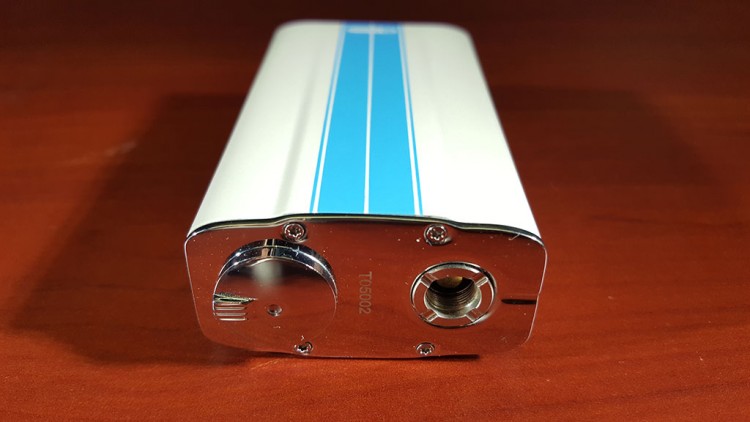 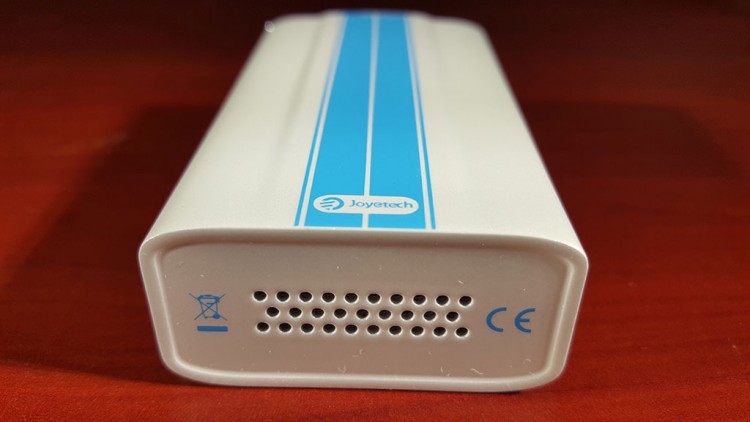 The top of the device (left) houses the rocker switch that is used to change the device settings and the 510 connector with a floating pin. The bottom of the VT has battery vent holes. 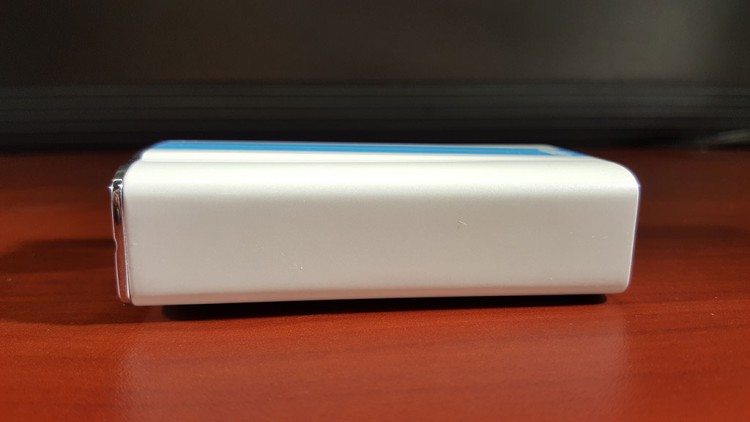 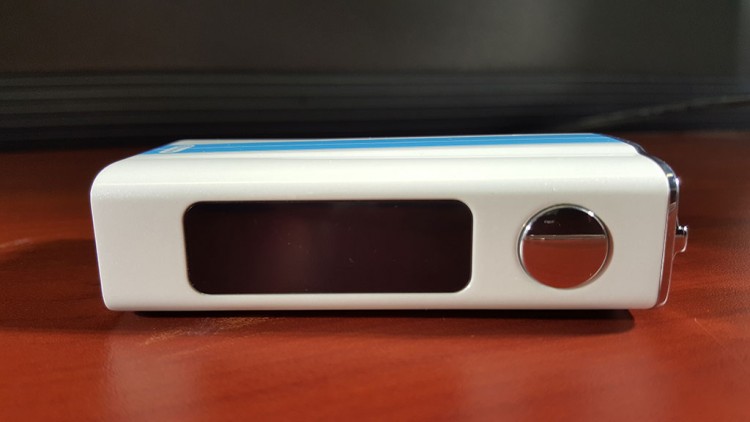 The front of the eVic VT has a huge OLED display and the fire button. 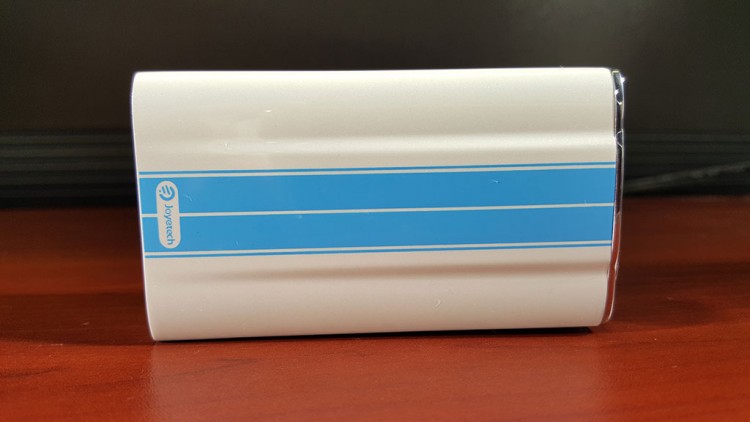 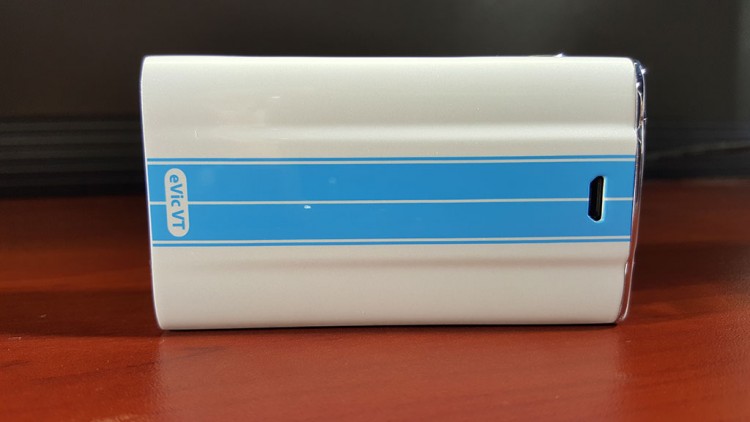 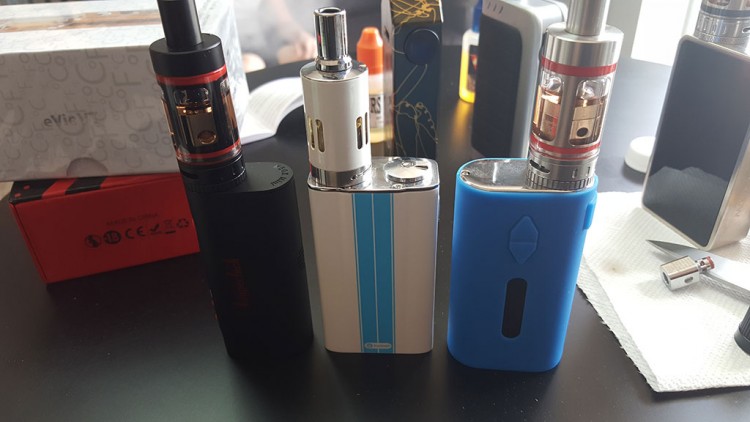 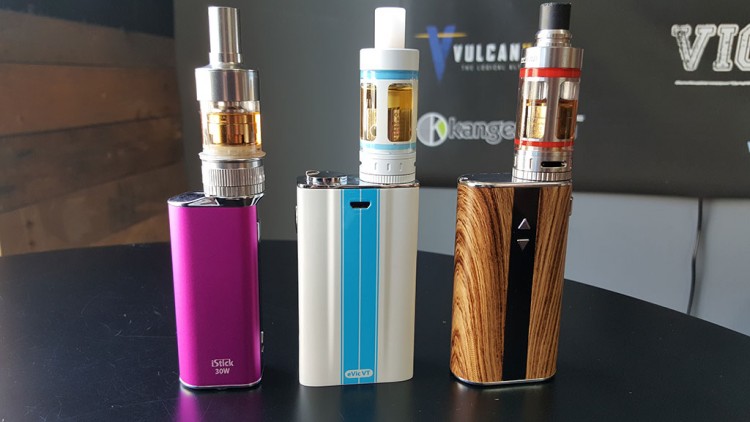 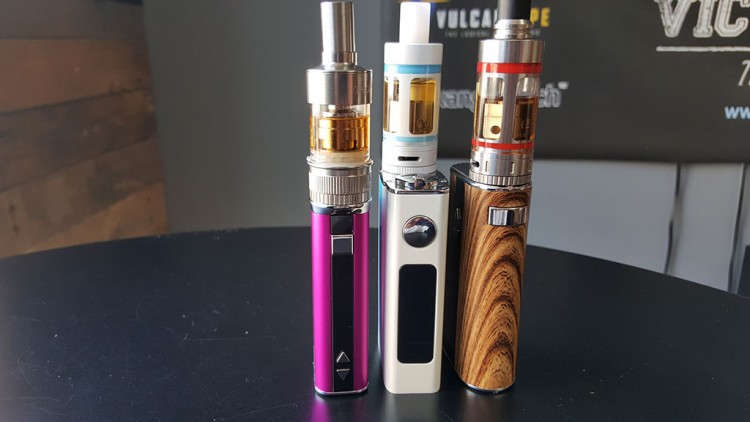 In my testing, I have tried both of the coils in the eGo One tank and nickel and kanthal with other tanks. The experience with the eVic VT was quite different with all of the coils. I will talk about the settings first. With the resistance lock turned off on the eVic VT, the device properly detected all the coils I installed. I am not 100% sure that is how it is supposed to work, but I like it.

I put the eGo One with a 0.2 ohm nickel coil on the VT and it automatically set the mode to “Temp Ni” and 450 F and 60 watts. I believe the 450 F and 60 watts were selected because that is what I manually set it to in an earlier test.

I then put the 0.4 ohm titanium coil and it changed to “Temp Ti” with the same temperature and wattage settings.

I put a Kanger Subtank with a 0.15 ohm nickel coil and it changed it back to “Temp Ni” and properly read the coil resistance.

Finally, I put a Kanger Subtank with a 1.2 ohm kanthal coil and boom, wattage mode at 15 watts.

In the video accompanying this review, you’ll notice that another tank with a 0.5 ohm kanthal coil was not properly read.

With other temperature control devices I have owned, you have to lock in the coil resistance manually. Apparently Joyetech is trying to simplify that but it’s not working every time. occasionally, the unit will ask me if it’s a new coil when I put a new tank on it but sometimes it does not even ask, it just does what it wants to. This can be bad and good.

Either way, if the coil resistance and/or coil type doesn’t register properly, as I have heard from others, you can always press the fire button 3 times and enter the configuration and change it manually. It’s not a big deal. As for the flavor between the different types of coils, I can’t taste much of a difference. The nickel coils have a little more “natural” taste than the titanium coils. While the battery life was much better with the temperature control coils, I prefer kanthal coils in wattage mode.

I am not really going to go into the tank. This tank comes with the kit and comes with a nickel and titanium coil but no kanthal coils, which is a bummer in my opinion. This is the same tank that comes with the eGo One Mega 2600 mah tube-style battery starter kit but these are colored to match the paint scheme of the VT’s body. I was not very impressed with the eGo One Mega tank and opted to use Kanger Subtank Mini tanks for most of my testing. The eGo One Mega tank is not awful, it’s just not my choice for my style of vaping. It might very well be a great tank for your style.

The way you navigate through the display on this device is a bit different that what most regulated devices work so it warrants its own section of this review.

At 1st, I absolutely hated it. I am starting to warm up to this now that I understand which way to turn the rocker switch. I am still not fan of the rocker switch but I am getting used to it. If you watch the video embedded into this review, you’ll see that I still have some issues after a week. It’s sometimes difficult to get into the different modes. You are supposed to get right in after 3 presses of the button, but that doesn’t always work out as planned.

Once you are in the menu mode, the on of the 4 sections will blink, starting at the top. At that point, you move the rocker switch left to move to the next section or to the right to toggle modes in the blinking section. It’s not as bad as it sounds once you get used to it and I am just now getting used to it after 13 days. 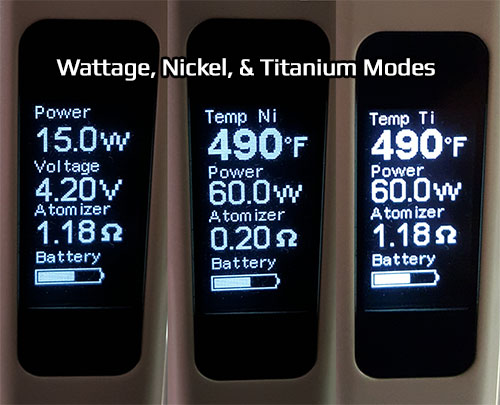 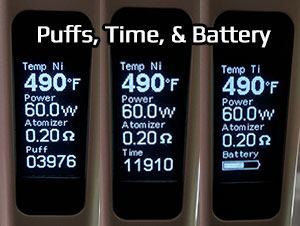 The bottom section of the display has 3 different modes as well. It has a puff counter, total vape time in seconds, and battery life (default). If you do the math, I have held down the fire button on this device for 11910 seconds or 198 minutes or 3 hours 30 minutes. That’s a lot of vaping and the 3976 puffs is a testament to how much I am enjoying this one!

I never gave battery life using temperature control much of a thought, but when I did my battery tests on the eVic VT, my eyes were opened to a couple of things that I never really considered. In temperature control mode, not only do you have the advertised benefits of temp control (no dry hits, cooler vape, etc), you will also benefit from longer battery life and less juice consumed.

Here are the 4 tests I did.

The internal battery is a 5000 mAh and the tests were way better than I expected. Why do the lower ohm nickel coils do so well? I never really watched when I fired it during the 1st test, but during the 2nd, I watched a little closer. Even though I have the wattage set at 60 watts, it’s never really firing that high. On the initial firing, the wattage seemed to jump to somewhere between 20-30 watts and drop from there. With a kanthal build at a set wattage, you are constantly firing at that wattage, thus draining the battery faster.

The eVic VT battery took me from 5-6 hours to completely charge using the provided wall charger.

I am very impressed with the battery life of the eVic VT. In any mode I will use it in, I can get 2 complete work days, what more can I ask for? Also, I am a heavy vaper. I vape all day. The only time I don’t have a mod in my hand is when it’s time to eat or sleep. I would expect an average vaper to get 25% more battery life than I did. Also note that I don’t do much sub-ohm vaping. Obviously a vaper with a 0.2 ohm kanthal coil in a Delta II is going to burn the battery life much faster than my tests.

I am seeing an advertised MRSP of $125 or so for the eVic VT kit but I don’t think they are selling at that price. I am hearing around $100.00 in a brick and mortar vape shop and around $70.00 online. If you can get one for anywhere in that price range, the value is incredible. If you have to pay $125 or more, the value is dwindling, but it’s still worth it in my opinion. Time will tell if it the device and the beautiful paint job will hold up, but after a week and a half of use, I am confident that the eVic VT is worth the money.

The Joyetech, in my opinion, is a game changer. Simply put, it’s my favorite mass-produced mod in the past year.

The look and feel of this device, coupled with the best implementation of temp control I have used so far, makes the eVic VT a winner for sure!

I highly recommend the Joyetech eVic VT to anyone that wants a sexy temperature control device. We don’t use star ratings around here, but if we did, this mod gets a 9/10.

What Needs Improvement: The rocker switch, I would have preferred that the device have buttons instead; The included eGo One Mega tank isn’t my favorite, but this is not really a knock on the device. The eGo One Mega is good, just not a tank I will use