There are plenty of waterproof cases on the market, all promising you the ability of being virtually “every-thing” proof, then at the end giving you one or two things that you have to compromise in order to make the case functional. This isn’t the case with the Dog & Bone Waterproof Case for the iPhone 6s Plus. 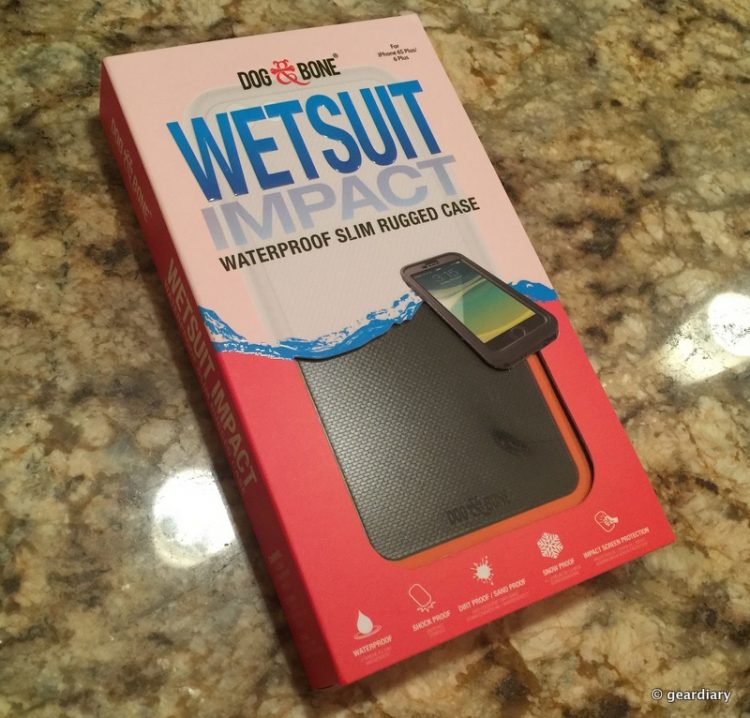 The first time I actually heard about the Dog & Bone Wetsuit Impact was actually while browsing YouTube, and stumbling across a full video review from our friend Aaron from MobileReviewsEh where he put the Dog and Bone Wetsuit through an EXTENSIVE review for the smaller iPhone 6 model back in 2015.

So when Dog & Bone actually sent me over their Wetsuit for the larger iPhone model to review I was pretty excited!

Since Aaron’s original review of the case, Dog & Bone has taken key issues with the case most users had with that version and made the appropriate changes to give you a more functional, user friendly case. 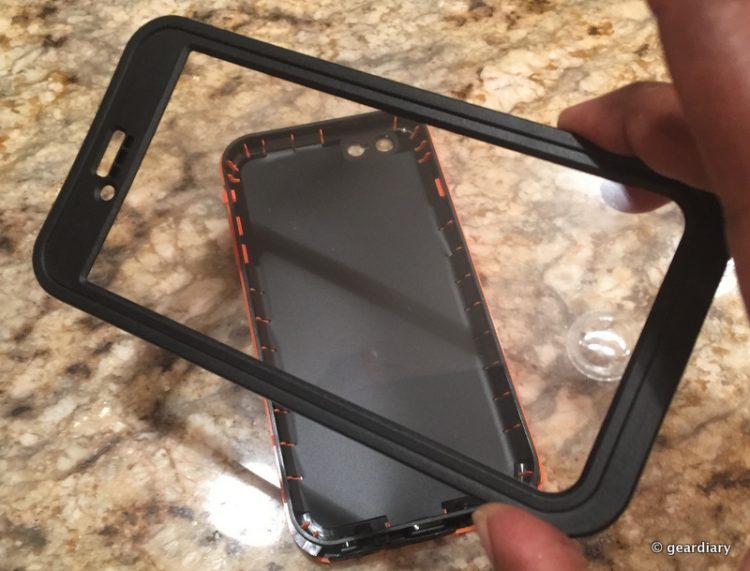 The case actually sports an IP68 rating, which that stat alone already trumps the Lifeproof cases you see some people using. What does this mean? Essentially your iPhone 6s Plus can actually be fully submerged in water for up to thirty minutes, but at a greater depth than others on the market, up to two meters. With summer coming up soon, I’ve been ready to jump in the pool and take it for a test run, but until then, I’ve been putting it through the paces in other ways because the case is not just immune to taking a dip.

Another big thing that Dog & Bone did was slim down the Wetsuit Impact and made it less “industrial” looking from its predecessor. The back of the case is all flush which is great if you tend to mount your case to your car. Although the case itself has trimmed up a bit, the functionality hasn’t been compromised as the buttons are all still covered, and don’t take a hard press to get them to function. On the bottom you get the flap that covers up the headphone jack, as well as a completely separate flap for the Lightning port. This is great to have each be separate, and indicated as well. The camera and the camera flash are both individually covered, and each have a wide enough spacing that pocket lint and grime will not end up getting caught in the lenses, unlike the Lifeproof. 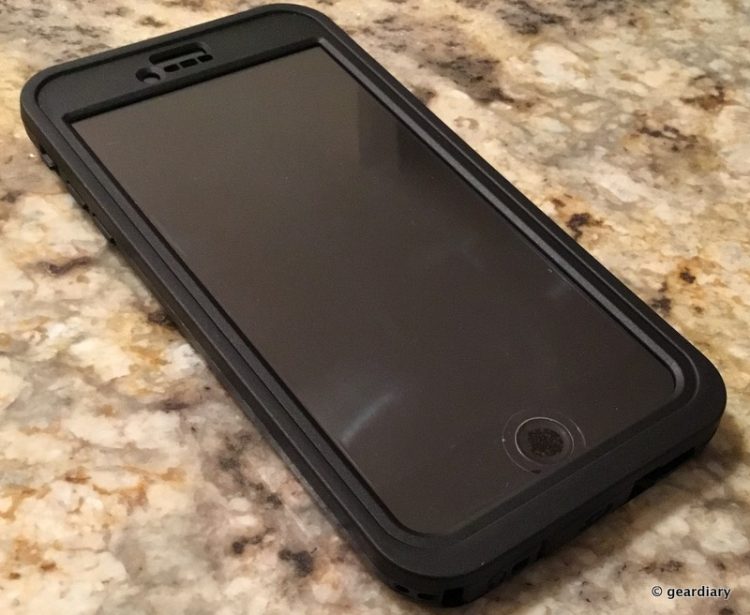 Since this model of the Dog & Bone is completely incased with its own screen protector, I would advise removing all third party screen protectors to make certain that the case closes all the way. I attempted to use the case with a screen protector and found the actual iPhone screen to be hard to tap without applying a bit more pressure. Since the Wetsuit Impact actually has glass impact screen protection, this is the closest you will actually get to having an actual glass screen protector included in a case which was a huge bonus. 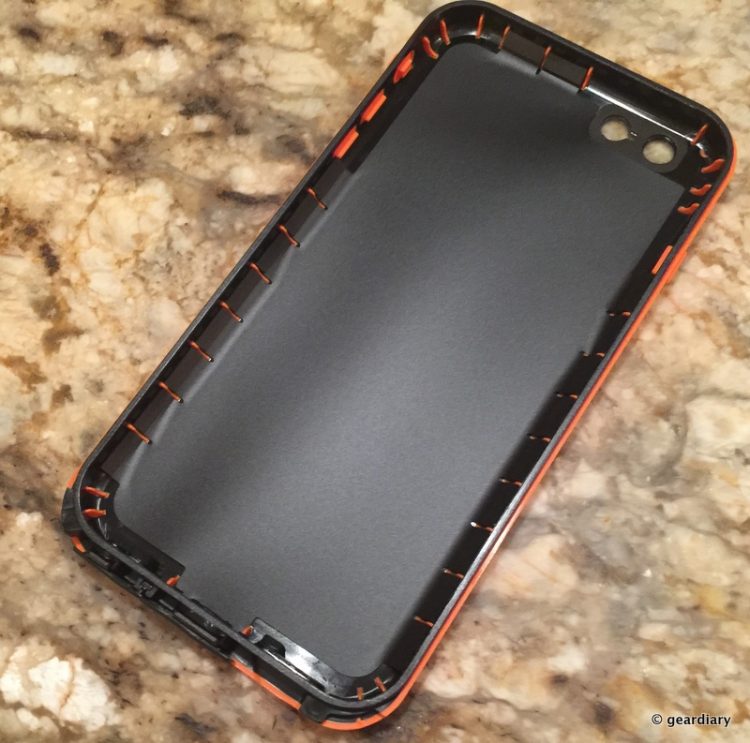 Featuring a triple layer of shock protection, the Dog & Bone Waterproof case actually is made of a Silicon boot, with a polycarbonate and rubber overmold which will protect your phone from being dropped from an average height. So if you are that person who mysteriously drops their phones a lot, or works outdoors, you’ll be happy to know that you will have a case that will withstand drops from up to 6.6 feet, which meets Military standards. 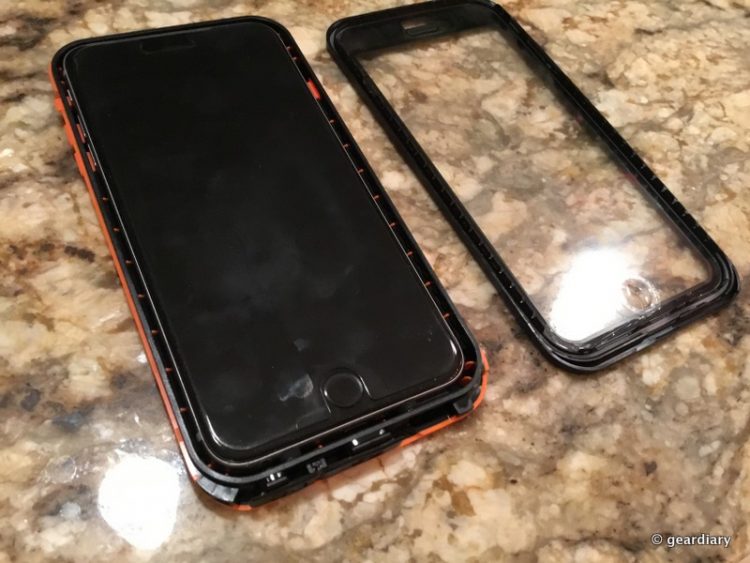 The case itself is also dirt and snow proof, so while you’re taking photos of your pup at the dog park and it takes a tumble in the mud, you’ll be happy to know you can actually rinse and keep on going.

One BIG thing for me with this case however is the touch ID compatibility. I tested out two different Dog & Bone cases, one orange and black, and one all black, and the orange and black ended up being a bit faulty with in terms of the touch ID/home button. Upon closing the case, everything functioned perfectly, but the film around the  Dog & Bone actually ended up bubbling up, making pressing the home button a bit more difficult. Luckily, Dog & Bone is easy to contact, and their social media accounts (Facebook and Twitter) usually have a quick turnaround, so I explained to them my situation and ended up with a completely new case, (an all-black one which I preferred). 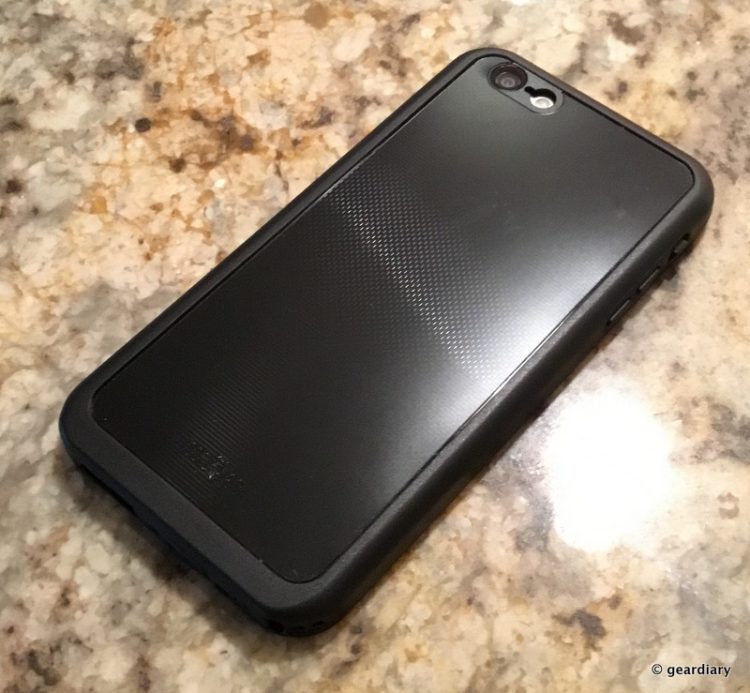 The all black model I have included all of the items that I received in the prior case which are the case itself, a case key for prying open the case, an audio jack extender, and an instruction manual. The audio jack was actually pretty great, and I found it to work a bit better than the Lifeproof ones I’ve used when listening to music. Since the cords are virtually identical, the one detail that Dog & Bone has that outclasses Lifeproof is the fact that their Audio Jack doesn’t have to be screwed into the case in order to work, and still be sealed. This little detail might not mean a lot to everyone, but if you are someone who goes to the gym often, it’s nice to know that you won’t have to find yourself on the treadmill trying to twist the extender in. 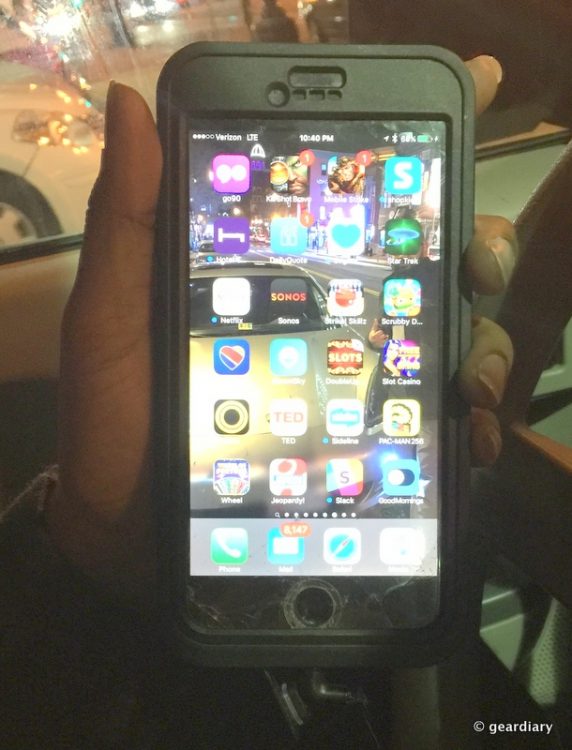 Overall, I personally LOVE the Wetsuit Impact and it’s easily become my daily case. I used to be the type to only put on my waterproof case when I was headed to the beach, but I’m fully content with my iPhone being in the Dog & Bone case full time. One thing I DO wish that this model had was completely touchless capabilities, because although the included glass on the case is nice, I’ve been a bit spoiled by the Nuud, and slightly do miss the already gorgeous iPhone 6s Plus screen.

Available for $89.95 If you’d like to pick up a Dog & Bone Wetsuit Impact, you can find out more details!

What I Like: Touch ID compatibility; Customer support is excellent; glass screen protector is awesome!

What Needs Improvement: Still would like a “Nuud-like” version for the larger model.