If you are a fan of Apple’s HomeKit and looking to take your smart home to the next level, one item you certainly should check out is the Elgato Eve Energy. 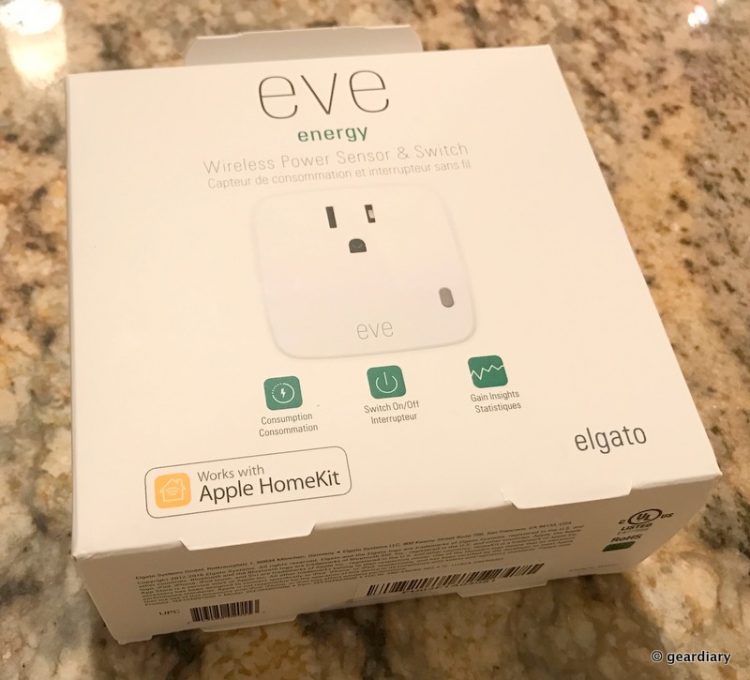 I received a copy of Elgato’s Eve Energy Switch to review and honestly, it’s the gateway to beginning, and enjoying Apple’s HomeKit. At $50, the appliance is essentially an extension of your outlet that allows you to control an appliance such as a light or home item by using either Elgato’s app, Siri, or Apple’s very own HomeKit app. 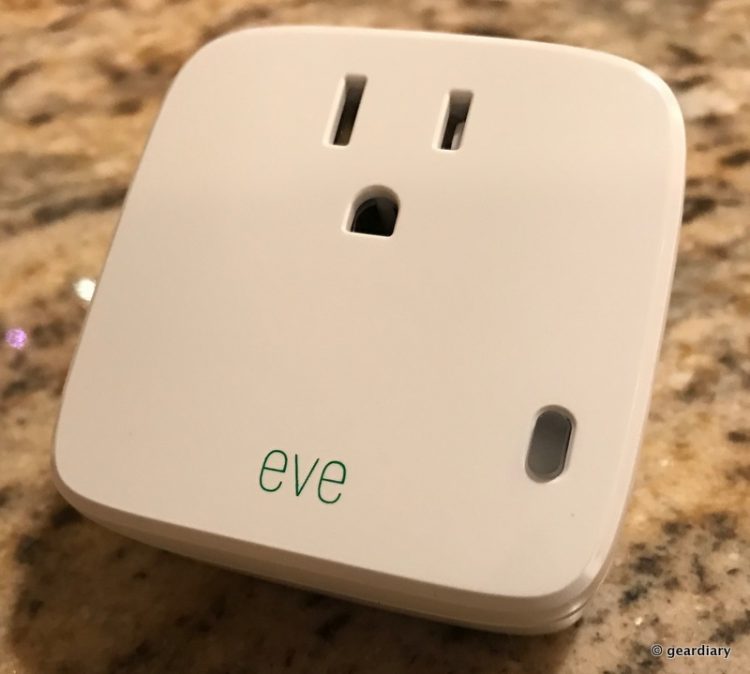 The small compact wall adapter is actually pretty solid in its white square frame and promises to help the user control the energy being drawn from an outlet. To be completely honest, it looks like any wall extension that you could purchase at Best Buy, and for the price that might make some people weary but for many of us, the internal features will certainly outweigh how it looks externally. Hopefully, you will have multiple outlets in your home because since the bottom of the Eve Energy is pretty bottom heavy, it’s best to use on the bottom outlet in your home, and plug your fan, space heater, or kitchen appliance into the adapter. There is a small LED light on the lower right of the Eve Energy that signifies if the device is in an on or off mode which I found to be pretty handy. 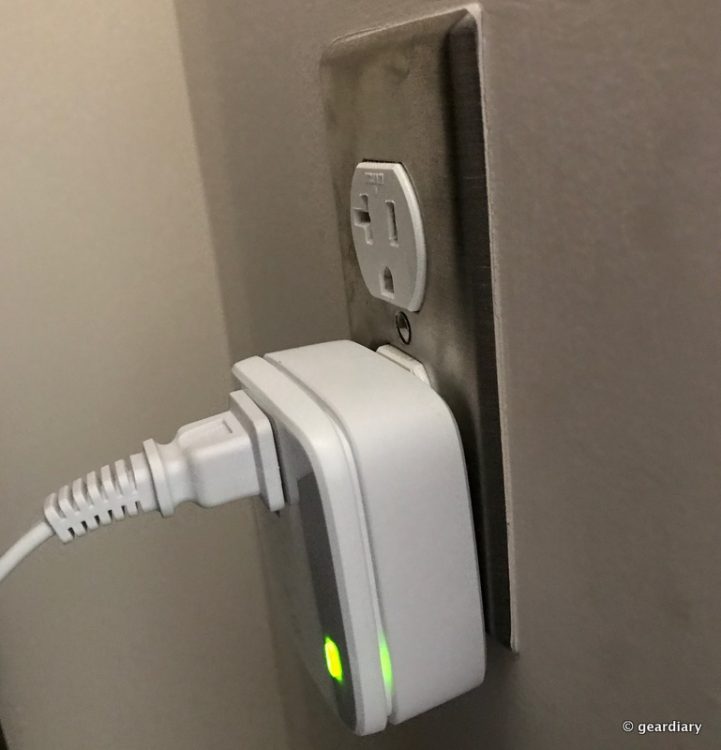 Setting up the Eve Energy is about as simple as it can get after initially plugging into the wall. You download the companion Eve app from the App Store and search for a new accessory in the app’s settings. On the side of the Eve Energy there is a unique barcode that you can in (like all of Elgato’s products) and it will pair almost instantaneously. After this, the Eve Energy will actually connect with any HomeKit application, as well as syncing directly to Siri for voice commands. 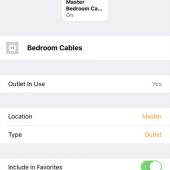 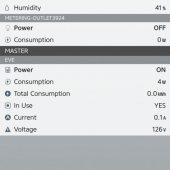 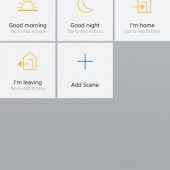 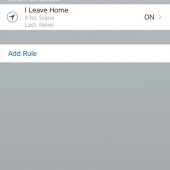 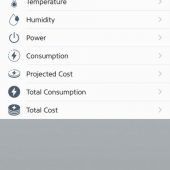 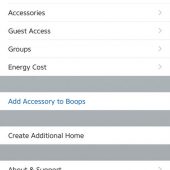 After you set up the Eve Energy, you can actually set up different scenarios for the adapter to us. Say if you leave for work at 8am, you can have a lamp that is plugged directly into the Eve Energy turn off whenever you leave the proximity of your home. If you have a fan plugged in, you can have it set to turn on in your bedroom when you step foot into the room. And if you are not home and forget to turn off the flat-iron, which my fiancé seems to do quite often, this is a bonus if you are already in route somewhere and cannot quickly turn around to check to see. It’s a pretty nifty feature being able to remotely turn it off without a concern.

When I started considering making my home a smart home, the first thing I thought was being able to use adapters like the Elgato Eve Energy on a multitude of connected devices, specifically being my 12-outlet power strip. To those of you who were wondering the same, let me just say, it will not work the way you expect. I plugged in my Belkin Power Strip into the Eve Energy and attempted to set it up, and while everything synced fine and was connected, there is no way to decipher one individual connected item on a power strip. I had my Roku, television, FiOS box, Xbox One, and a few other household products connected. Since the Eve Energy only can sense the main plug connected to the outlet itself, it’s an all or nothing situation when it comes to surge protectors and power strips, which should be obvious, but still a bummer. 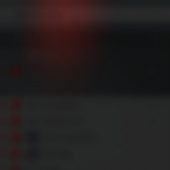 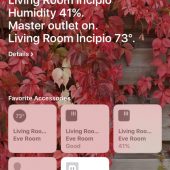 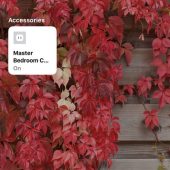 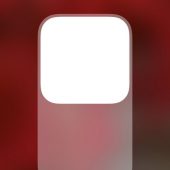 However, if you do end up having just an individual thing like a phone charger, lamp, or small appliance, the Eve Energy excels in every single way. Being able to turn on things from not only your iPhone’s apps, but from speaking to Siri telling her to “turn off my bedroom lamps” has been awesome”. The bonus here is you can give access to a spouse to do the same commands which is great. The only downfall here is the light switch for example would always have to be on. I haven’t noticed a change in my monthly bill or any increase of light usage on my monthly statements either because of this. The app will not tell you an estimate of how much money on electricity you are saving which is a bit of a bummer, but it’s safe to say that it does help save a small fraction by being able to control your home appliances through an app. Instead, though, it does give you consumption data that is pretty much a chart that displays wattage that are charted over time. This is great to look at knowing your peak hours and actual usage times.

Overall, the Elgato Eve Energy is a great introductory HomeKit product that is not only simple to set up, but even simpler to use. There aren’t many HomeKit items currently, but if you were to start somewhere, this should be your first place, especially if you do not have a smart thermostat like the Nest that connect to Apple’s HomeKit. Plus… who honestly wants to get out of bed to turn the lights off? Let Elgato help you out!

For more information on the Elgato Eve Energy head over to their site today!

What I Like: Simplicity of product, and seamless setup. Works with HomeKit FLAWLESSLY and the graphed data within Elgato’s app is unmatched

What Needs Improvement: I would’ve liked the Eve Energy to be a bit smaller in width since it can only really be used in the bottom outlet; Maybe TWO outlets in another model?