I have always been a sucker for arcade shooting games. We recently received a Sure Shot HD complete video game system to review, and it has been a hit. The $79.99 system brings arcade shooting into your home without the need of a new console or tons of expensive hardware. Let’s take a close look.

The Sure Shot HD system comes as a small package. The sensor, gun, HDMI cable, and USB power cable are the only contents. To set up the system, plug the power cable into the TV USB outlet (if your television does not have a USB port, plug it into a powered USB block). Next, plug the USB into the sensor and the desired port on the TV. 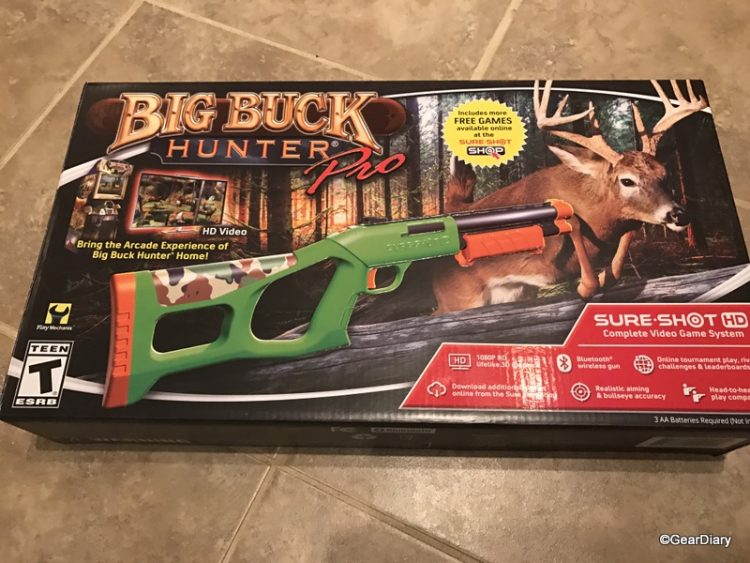 The sensor needs to be placed either on top or just below the television in the direct middle. When we played the game in the den and took these photos, we had it on top since the TV is on the wall. The system is now in the living room and sitting below the TV. It seems to be a lot more accurate with the sensor below.

The gun requires 3 AA batteries and the trigger and a button on top are used to access and use the menus. The gun also has a pump action that will reload during the Big Buck Hunter Pro game. Once everything is set up and the system starts, the gun will need to be calibrated by aiming at the corners of the screen.

The Sure Shot HD comes with Big Buck Hunter Pro already installed. Once you create an account and connect to WiFi, the store will be available which offers game additions as well as new games. 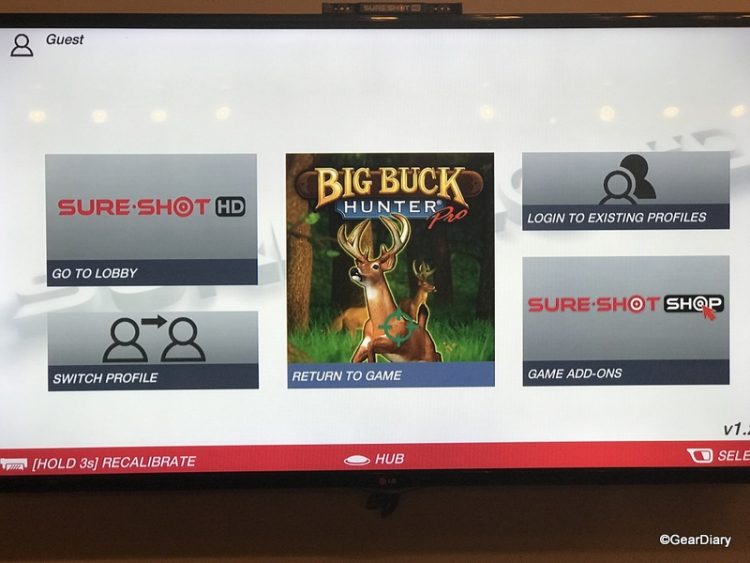 There are currently two more games available for the console as well as additional content for the Big Buck Hunter Pro game.

So, now we know how the game is set up and the system features, what about the gameplay. Big Buck Hunter Pro has plenty of play time in our house the past few days and we have all enjoyed it. The graphics are bright and crisp, the sounds are good and the gameplay is fun. A second gun controller is available for $39.99. We played the turn-based game where each of us took turns hunting each adventure.

There is a wide variety of animals to hunt and many different treks. Each scene includes animals in which you are to shoot the bull or bucks. Be careful not to shoot the cows or does, or the game warden will not be too happy and your turn will end. 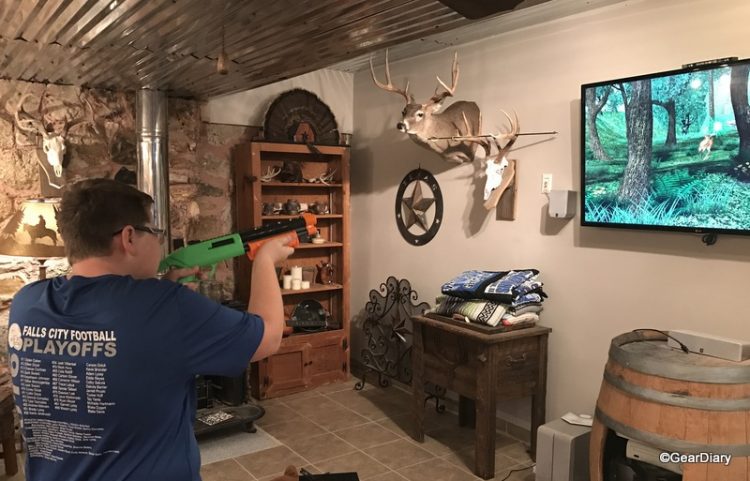 If you create a profile there are online tournaments, rival challenges and leader boards available. Just a word of advice, your 12-year-old that shoots better than you in real life, will be able to whip you on this game. He may or may not think it is really funny and talk a lot of trash! Your 9-year-old might start slow and then really figure it out and make you the worst shot of the game. Of course, that is all hypothetical!

The Sure Shot HD complete video game system is really fun. There is a small amount of hardware and no discs or cartridges to deal with. The game is fast and the graphics are great. Once the gun is calibrated well, the aiming is accurate and the game play enjoyable. My family has really enjoyed hunting the various animals and playing the bonus levels. It is fun to compete against each other and see who comes out on top. The store is something I am sure the developers will continue to expand making the system fresh. I recommend the affordable system to anyone who enjoys arcade shooters, especially if you have a couple of little boys in the house. You can learn more about it here.

What I like: Fun gameplay with simple hardware. Once calibrated, the aiming is accurate.

What can be improved: I will be interested to see how the store and extra games develop over time.