Whether you’re a police officer, fireman, hiker, camper, prepper, hunter, in the military, or just someone who wants a professional grade flashlight that will brilliantly light up objects as far as 100 feet away or more, you should consider the police-grade ASP Turbo CR 920 Lumens LED Flashlight. It’s a brawny, bright, brute of a light.

If you aren’t familiar with ASP, here is a quick explanation of who they are and what they stand for from Michael Hess, their Vice President of Consumer Markets:

ASP (Armament Systems and Procedures) has been a leading manufacturer of what are called “less lethal” tactical weapons and gear for law enforcement for 40 years. Our flagship product is the expandable baton – chances are your friendly local police officer has one – and we also make what are widely considered the finest handcuffs in the industry, as well as OC (pepper spray) devices, and ultra high-end flashlights. ASP products were, for many years, effectively available only to law enforcement, military, and related personnel, through channels dedicated to those industries. But we’re now taking a subset of our products – the ones that are appropriate for civilian sale and uses – and making them available through consumer channels.

What makes this story meaningful is that unlike the many cheap lights that have the designation “tactical” slapped on them for marketing purposes, these are the real deal… equipment that law enforcement officers trust with their lives (if that sounds like an exaggeration when referring to a flashlight, ask a cop how he/she feels about having a reliable flashlight in sketchy situations). In fact, ASP does training seminars for agencies and officers around the world in the integrated use of batons, restraints, and flashlights in law enforcement. The company’s slogan is “protecting those who protect,” and our customers can’t afford less than the best.

Which brings us to the ASP Turbo CR. Included in the package are the LED flashlight, two CR123A batteries with a plastic carry case, user instructions, a zippered travel case, and two ASP stickers. 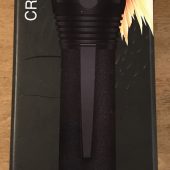 Measuring just 6.5″ long by 1.4″ wide (on the beam end) and weighing 5.4 ounces with the batteries installed, the Turbo CR has a machined 6061 T6 aluminum body that is Type III hard coat anodized with a matte black finish. The foamed vinyl grip in the middle acts as a thermal insulator and grip. The flashlight has a 2.5″ long replaceable Turbo Snap-Loc Clip that can be attached to the bezel (shown here) or the switch end of the flashlight …

… or it can be removed entirely.

The Turbo CR can use standard CR123A batteries, but ASP also makes their own to strict standards.

ASP Lithium cells incorporate a positive temperature coefficient (PTC) protection circuit and safety vent.  The system prevents instability in the event a cell overheats or should rapidly discharge as a result of a short.  A PTC circuit and backup pressure relief vent allow safe operation of CR123A Lithium batteries in high discharge devices such as high intensity LED flashlights. 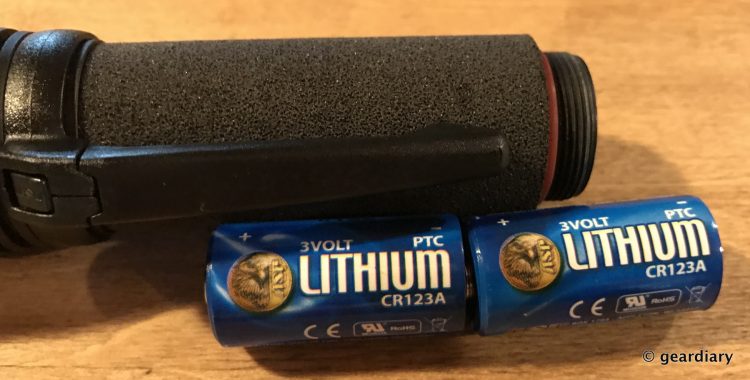 The Turbo CR “provides an intermittent or constant output of 920 lumens with a one hour run time as measured against the ANSI FL1 Standard.”

In case you are worried that buying the ASP-branded batteries versus some other brand’s translates to a lot of extra expense, it’s really not that bad. These batteries are $2 each, but they have a ten-year shelf life, they function in a wide range of temperatures and environments, they are leakproof and vibration resistant, and they provide the most dependable source of power currently available for handheld professional lights.

On the end of the ASP Turbo CR, there is a textured activation button; the section that holds the button can be rotated to three positions, allowing the activation button to be set for intermittent (at the 0 mark), locked (in the middle), or constant (at the • mark).

When you push the activation button, you’ll be rewarded with a “high output thermally controlled LED. The light source has its own parabolic reflecting chamber. The resulting output is blindingly bright.”

This is no exaggeration. Behold …

Notice how the light is just as bright throughout the entire beam? There are no dark circles.

All contacts and springs of the Turbo are gold plated for increased conductivity.  The electronic circuitry drives a Cree XP-L LED.  The aluminum reflector of the Turbo is finished to produce a penetrating beam with no dark circles.

But the light isn’t just bright, it is also incredibly far-reaching … 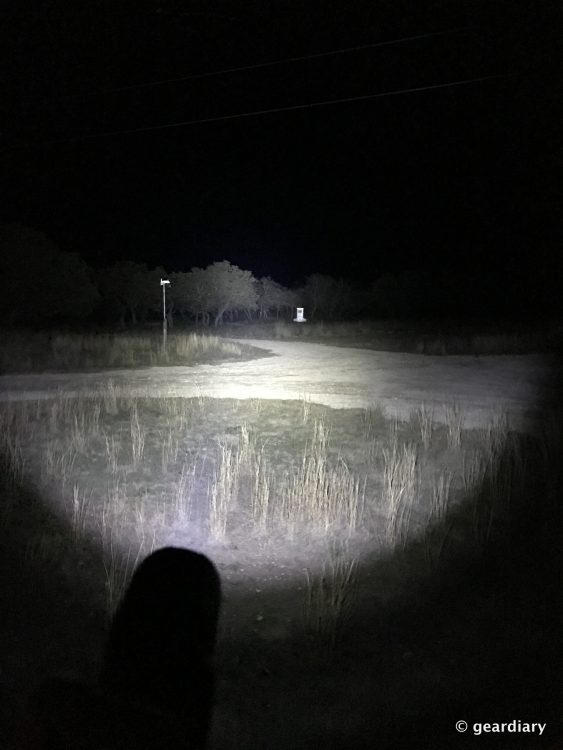 This deer feeder is over 100 feet away from where I’m standing.

I should mention that 920 lumens produce an incredible amount of light; if you do a quick search for the typical tactical flashlight’s lumens, you’ll see everything from 250 to maybe 800. The Turbo CR is brighter still.

The Turbo CR’s beam is so bright and strong that you should never look directly into the beam, and you should never stand the flashlight lens face down on any surface when the light is turned on. ASP says that this “will cause extreme heat buildup and possible fire.”

Hopefully, you’ll never need this property of the light, but the beam end is quite heavy and it has jagged edges which would probably come in very handy should you ever need to use the flashlight as a self-protective weapon. I would not want to be whacked with it; I also wouldn’t want someone to shine the light in my eyes as I was approaching, as it would be blinding. 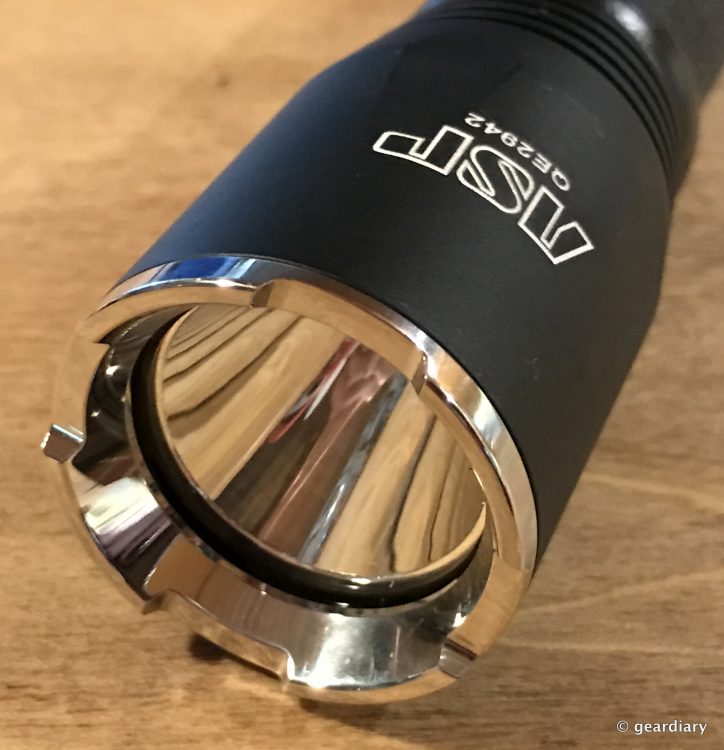 Most of the time, when I use a flashlight, it is for short periods of time; for example, I’m walking to our cabin at night, or I need to check on something outside. If that’s how you use the ASP Turbo CR, the batteries should last for quite some time. But if you need to use it constantly, the batteries should last for about an hour. For those interested in a rechargeable battery system, you can go with “dual fuel”; that way, “if there is no time to charge the onboard rechargeable battery, it can be replaced with 2 CR-123s… another cop-focused feature, as they can’t afford to have a dead flashlight.”

At $150, the ASP Turbo CR is not inexpensive. What you should consider when deciding whether or not to purchase it is how serious you are about getting the best light with the strongest beam. At 920 Lumens, the Turbo CR is a professional, police-grade light that should provide years of excellent use.

The ASP Turbo CR 920 Lumens LED Flashlight retails for $150, and it is available directly from the manufacturer. You can learn more about it here. Replacement batteries are $8/set, but you can buy them in bulk, too.

What I Like: Small-ish flashlight that puts out an incredible amount of light; The beam does not have any dark circles around it — it is just as bright all the way to the edges; The flashlight has a far-reaching beam — over 100 feet will be brilliantly lit; Would be effective for self-defense (shine the light in their eyes to blind them, if all else fails, whack them with the beam-end); There is a rechargeable battery option

What Needs Improvement: None