The laundry bag is made of nylon, and it sits at the base of the lower right side of the Away Medium. It’s fairly large in size, and I was able to fit a couple of sweaty gym clothes and worn clothes that I wanted to separate from the clean so that when I got home they would be easy to distinguish and sort through. 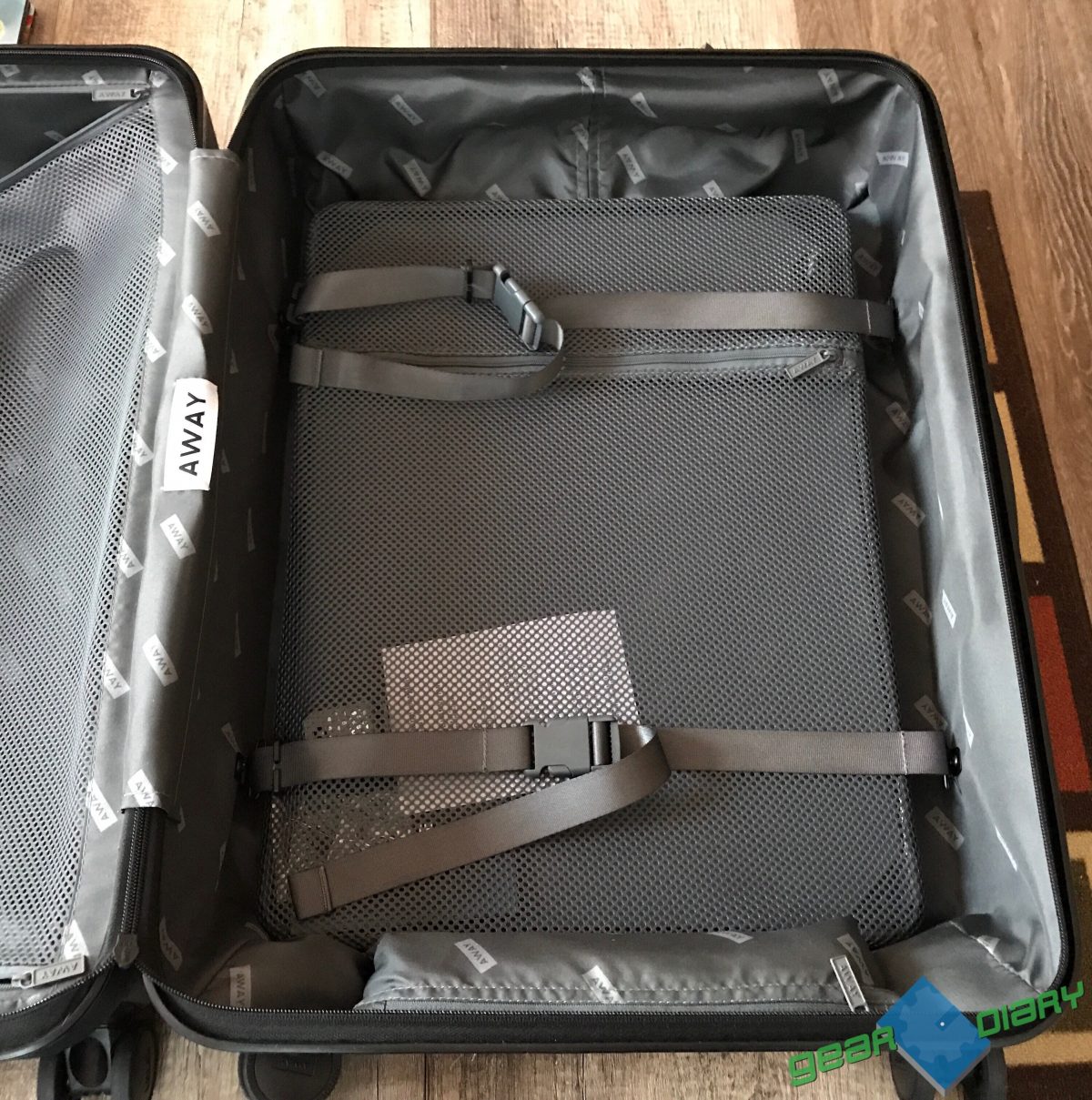 There is even a mesh compression pad that doubles as a compartment for putting clothes such as a nice pressed shirt into, or even things like extra socks or clothes that you’ll want to keep from getting wrinkled when bundled with your regular t-shirts. 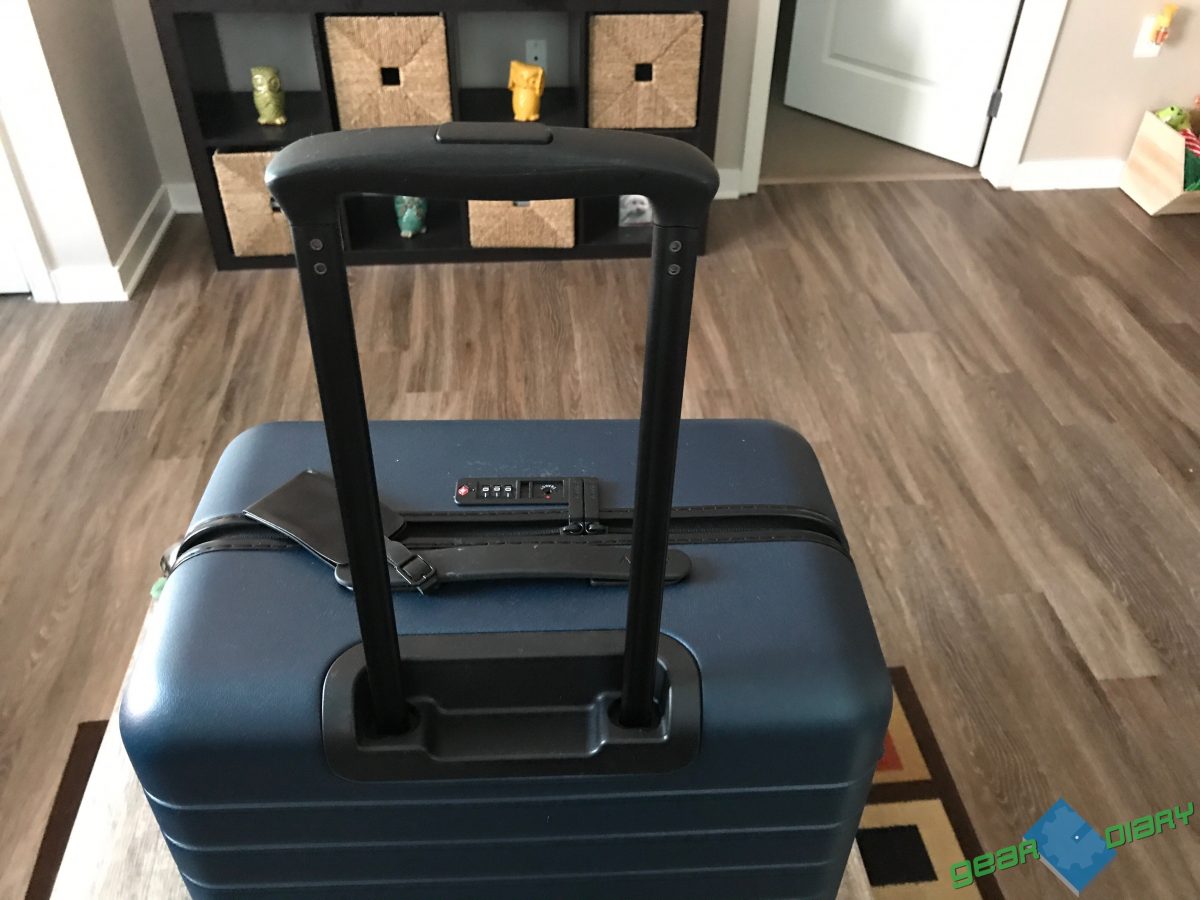 Away Luggage prides themselves on not just the design of their luggage but the security as well. Each piece of luggage comes with a TSA-approved lock. 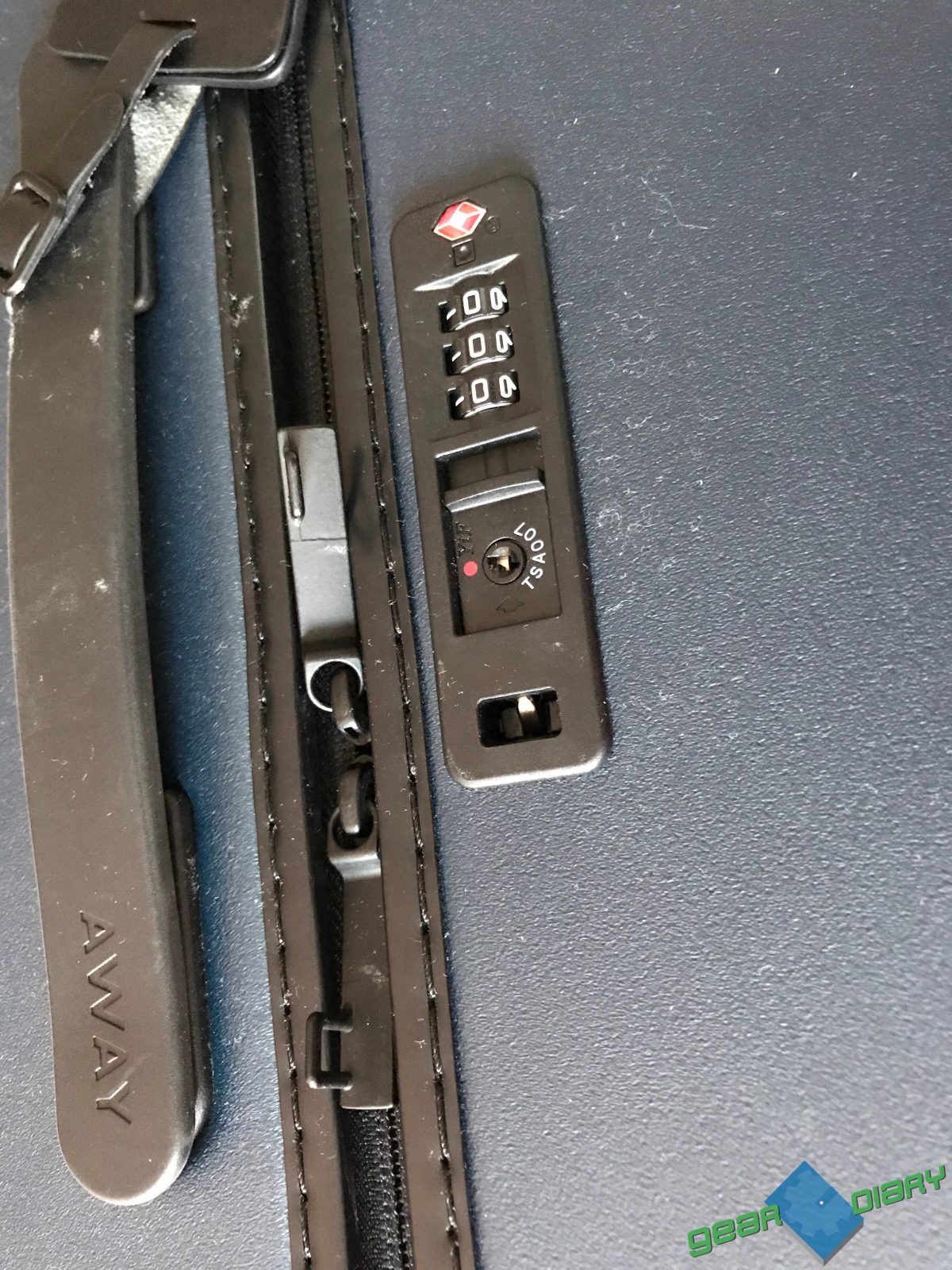 You zip both zippers up to the top of your luggage, snap them into the lock, and it will click to lock. Obviously unlocking uses the three number code that you designate after you’ve changed it from the traditional “000” code that comes on all brand new luggage. 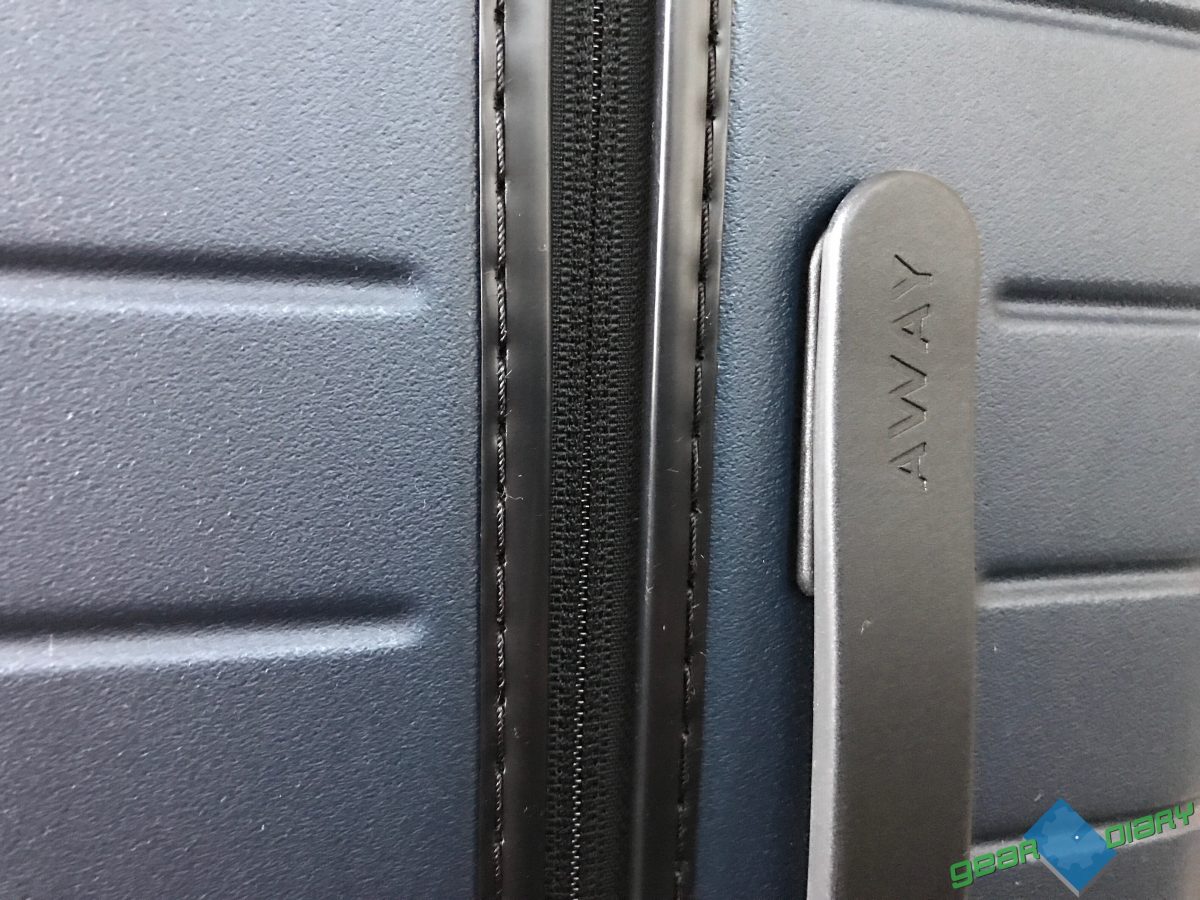 The Medium sized Away Luggage is certainly not meant to be a carry-on, and let me be the first to tell you, there’s not much of a chance you’ll find an airline that will allow it onboard. When flying JetBlue, even though I was told by TSA that it “should” fit overhead (after the agent attempted to press down on the luggage to get it to fit into the under scaled model that sits in front of the TSA Pre-Check lines at the terminal), but eventually he let me pass with it. I got all the way to my gate, waiting to board, only to be told by the attendant that it wouldn’t fit into the overhead bin and would need to be checked.

Now sure, I knew this due to the size, but I think that a lot of airports and airline companies see a hard shell suitcase and instantly think that they are all created equally. I wish I could say that were the case with the Medium Away. And as someone who dreads hanging at the luggage pickup, I really would’ve much rather gone with the carry-on size which is a bit smaller, but from the looks of it, can still fit the things that I typically travel with. 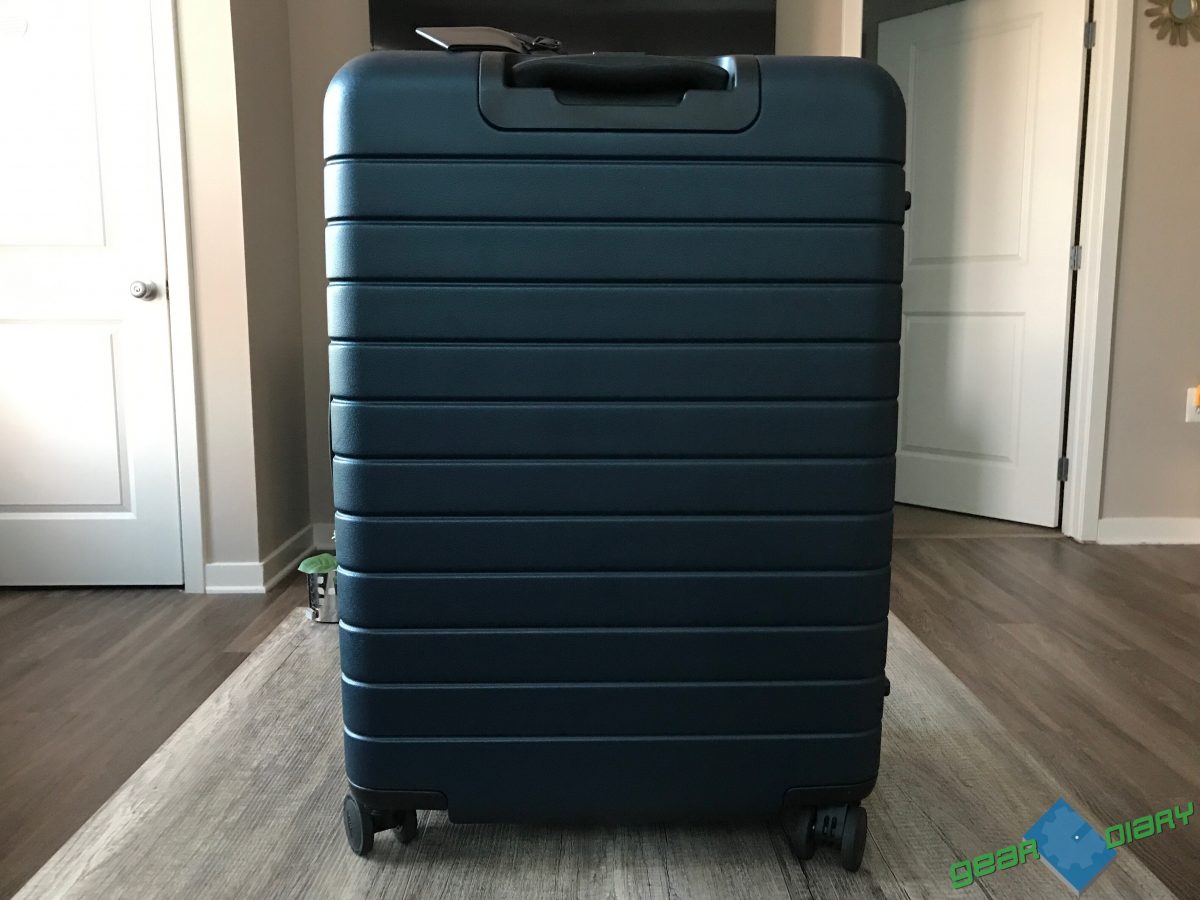 Now, what would I improve? Well, there’s not much. The design of the luggage is super nice, and although I did not mention this earlier, the wheels on the Away are absolutely fantastic. Featuring Hinomoto wheels that rotate 360-degrees, I was able to go from pavement to gravel to brick road with the Away, and the travel of the luggage held up. The wheels themselves are a bit small, but nothing to be worried about getting stuck into grates on the sidewalk.

Previous Page2 of 3Next Page
Want More? Follow Us Here!