Marketing is a funny thing. Companies try really hard to show they support various causes, or craft targeted emails to celebrate specific holidays or themes. Sometimes this works. Sometimes it doesn’t. Toast sent out a very generic email yesterday to celebrate Pride month that missed the mark by a wide margin, though I don’t think that was their intention. 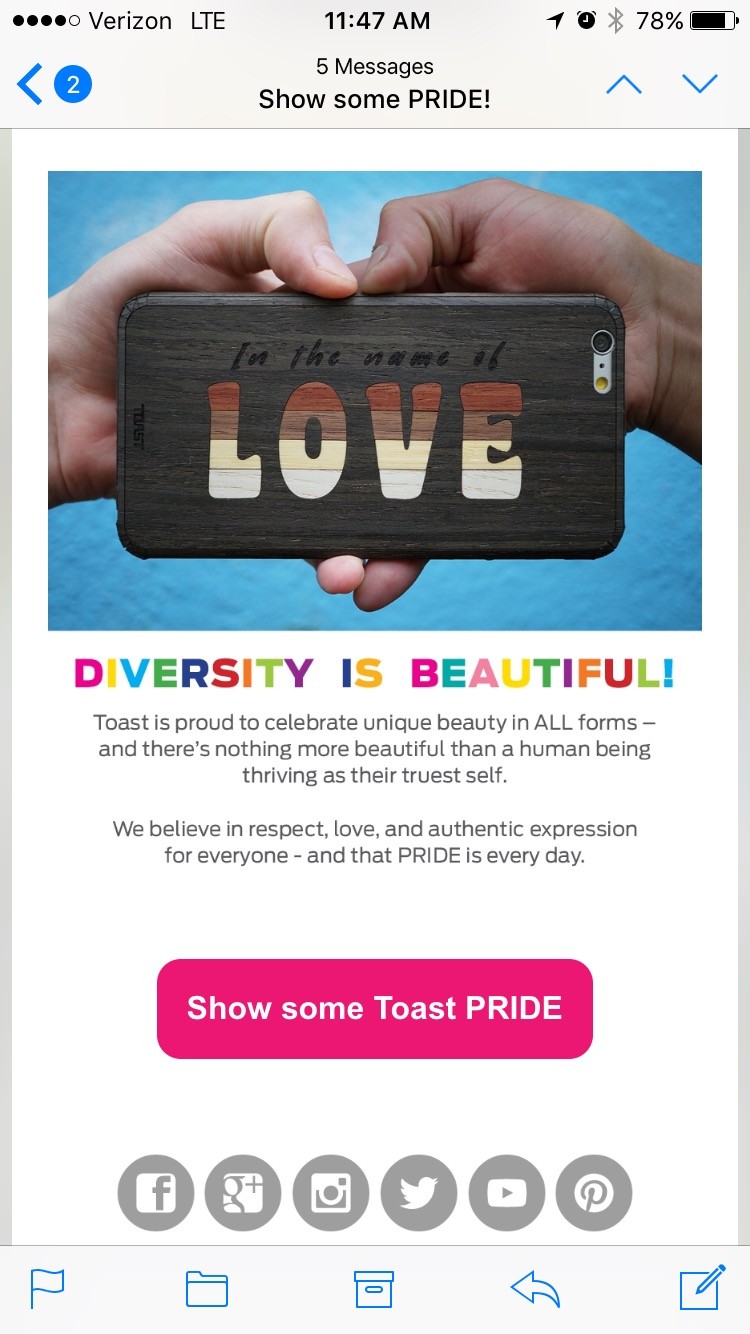 It sounds quite innocuous, and in fact, it is rather bland and generic. It’s so generic, in fact, that if you removed the rainbow lettering, you’d be hard pressed to state definitively that this is for Pride month, or even what Pride month is. It’s an impressive bit of gymnastics to attempt to celebrate LGBT Pride while also managing to not say “Lesbian, Gay, Bisexual, Transgender”, or even reference relationships, love, marriage, or the ongoing fight for equal rights.

Pride has really exploded into something that gets marketed in the mainstream, but I think it’s disingenuous to present a Pride email without acknowledging what Pride Month is, or even why it’s in June. So here’s a quick history lesson (courtesy of Wikipedia):

The Stonewall riots (also referred to as the Stonewall uprising or the Stonewall rebellion) were a series of spontaneous, violent demonstrations by members of the gay (LGBT) community[note 1] against a police raid that took place in the early morning hours of June 28, 1969, at the Stonewall Inn, located in the Greenwich Village neighborhood of Manhattan, New York City. They are widely considered to constitute the single most important event leading to the gay liberation movement and the modern fight for LGBT rights in the United States.[2][3]

Gay Americans in the 1950s and 1960s faced an anti-gay legal system.[note 2][4] Early homophile groups in the U.S. sought to prove that gay people could be assimilated into society, and they favored non-confrontational education for homosexuals and heterosexuals alike. The last years of the 1960s, however, were very contentious, as many social/political movements were active, including the Civil Rights Movement, the counterculture of the 1960s, and the anti-Vietnam War movement. These influences, along with the liberal environment of Greenwich Village, served as catalysts for the Stonewall riots.

Very few establishments welcomed openly gay people in the 1950s and 1960s. Those that did were often bars, although bar owners and managers were rarely gay. At the time, the Stonewall Inn was owned by the Mafia.[5][6] It catered to an assortment of patrons and was known to be popular among the poorest and most marginalized people in the gay community: drag queens, transgender people, effeminate young men, butch lesbians, male prostitutes, and homeless youth. Police raids on gay bars were routine in the 1960s, but officers quickly lost control of the situation at the Stonewall Inn. They attracted a crowd that was incited to riot. Tensions between New York City police and gay residents of Greenwich Village erupted into more protests the next evening, and again several nights later. Within weeks, Village residents quickly organized into activist groups to concentrate efforts on establishing places for gays and lesbians to be open about their sexual orientation without fear of being arrested.

After the Stonewall riots, gays and lesbians in New York City faced gender, race, class, and generational obstacles to becoming a cohesive community. Within six months, two gay activist organizations were formed in New York, concentrating on confrontational tactics, and three newspapers were established to promote rights for gays and lesbians. Within a few years, gay rights organizations were founded across the U.S. and the world.[citation needed]On June 28, 1970, the first gay pride marches took place in New York, Los Angeles, San Francisco[7] and Chicago commemorating the anniversary of the riots. Similar marches were organized in other cities. Today, Gay Pride events are held annually throughout the world toward the end of June to mark the Stonewall riots.[8] The Stonewall National Monument was established at the site in 2016.[9]

Pride isn’t just about celebrating rainbow flags and dancing in the streets. Pride is about remembering that a marginalized group of people stood up and fought back against an unfair system. People were being arrested for being in gay bars. Women could be arrested if they weren’t wearing a minimum number of articles of women’s clothing. Anti-sodomy laws existed as a way to arrest gay men. And yes, we’ve won same-sex marriage across the country, but that doesn’t mean Pride Month gets to pass into the same sort of “happy fun times” that St Patrick’s Day or similar cultural events have become.

So far in 2017, 13 transgender individuals have been killed in violent hate crimes. 15 states do not have laws declaring violence against someone being LGBT as a hate crime. 17 states do not have any laws protecting LGBT people from being fired for their sexual orientation or gender identity. Your housing application can be denied on the basis of your sexual orientation in 27 states. 49 people were killed and 58 were wounded in Pulse Nightclub last year during Pride. And 34 states do not have any laws, policies, or training for protecting LGBT students in public schools. (Several of these statistics can be fact checked using Human Rights Campaign).

Yes, I’m calling Toast out specifically because their email was a little bit glib, and felt a bit like they were trying to wink to their audience instead of offering up a true sentiment. They aren’t the only company to slap a rainbow on things for the month and pretend it’s all better. It’s not all better, it’s still a long fight to go, and pretending that everything can be summed up with “authentic expression for everyone” is ignoring the very real issues that Pride was created to address, and that still need to be addressed. It doesn’t just exist so you can market cases and cables and apps and websites, it exists because there are still hate crimes, still bullying, still laws that actively work against the best interests of the LGBT community. It exists so we can remember the people who had the courage to stand up in a world significantly more hostile to them than this one, and it exists so we can create a world even less hostile for the next generation.

Yes, Pride Month is a celebration, but Pride Month is also a reminder that we’re still not truly equal, and sending a Pride email without even mentioning the words “Lesbian, Gay, Bisexual or Transgender” is an unfortunate misstep that highlights the reasons we have to have a Pride Month at all.