Chances are you’ve heard of a company named Bose, but if you haven’t, then you may have seen they make all types of audio products from speakers to headphones. If you’re into sports, you’ve seen plenty of athletes wearing their products, especially their Bose QuietComfort 35 Wireless headphones.

EBags.com is a popular Travel accessory company that sent us Bose’s awesome QC 35 Acoustic Noise Cancelling headphones to try out, so let’s dive right into it. 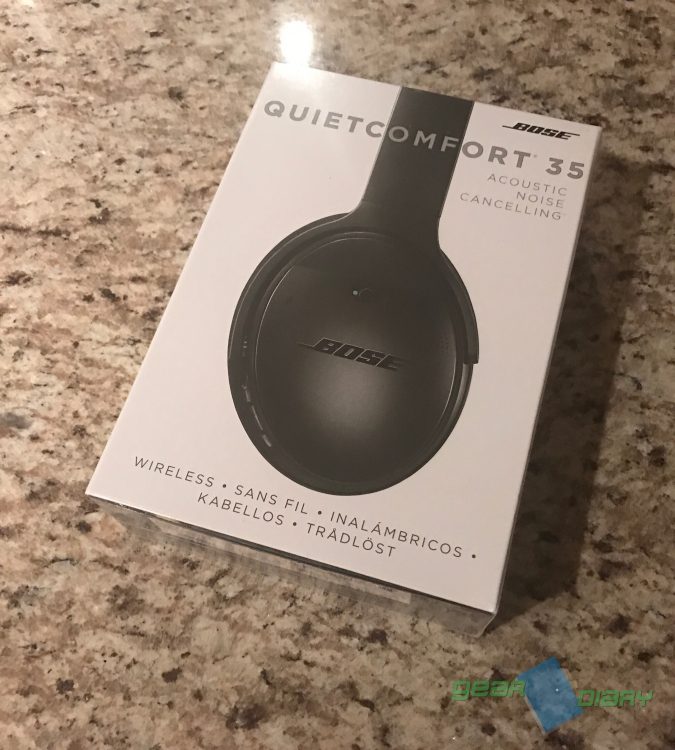 The Bose QuietComfort 35 Bluetooth Wireless Headphones are highly touted by many other companies as the best wireless headphones on the market today, and honestly, I’d have to agree. Featuring some premium features such as active noise cancellation and a 20-hour battery life, the QuietComfort 35, also known as the QC35s have been my go-to headphones daily, no matter what. While I still use my Master & Dynamic Headphones while at my desk, and around my home, the QC35s by Bose might be the lightest, most comfortable pair of headphones that I’ve ever worn. Obviously with a price tag of $349.99 they certainly should be, but this is certainly a case of truly getting what you pay for. 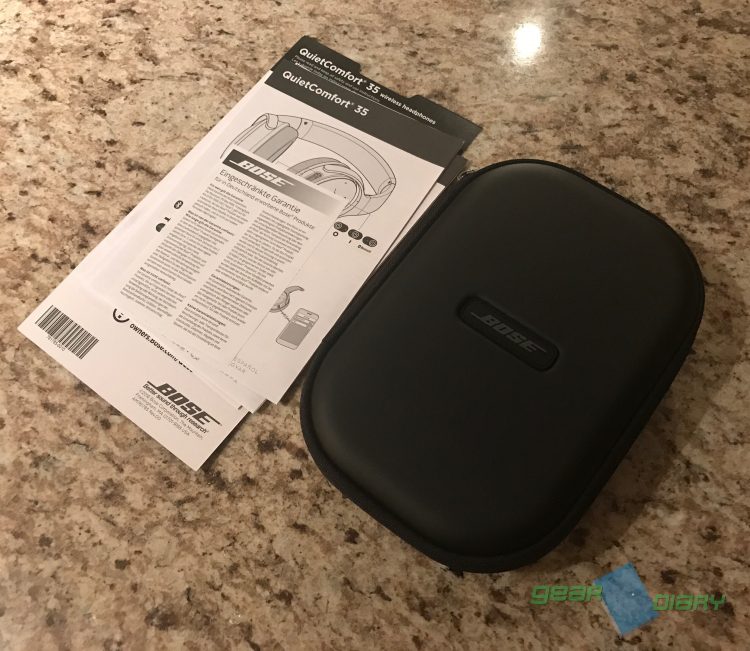 Inside of the box for the Bose QuietComfort 35s you’ll receive obviously the headphones which are available in Black or Grey color, a super portable leather hard-shell case with the company’s logo on it, and a bunch of literature that gets you more familiar with the QC35s. However, let’s start with the leather case itself since it’s the first thing that you’re presented with. 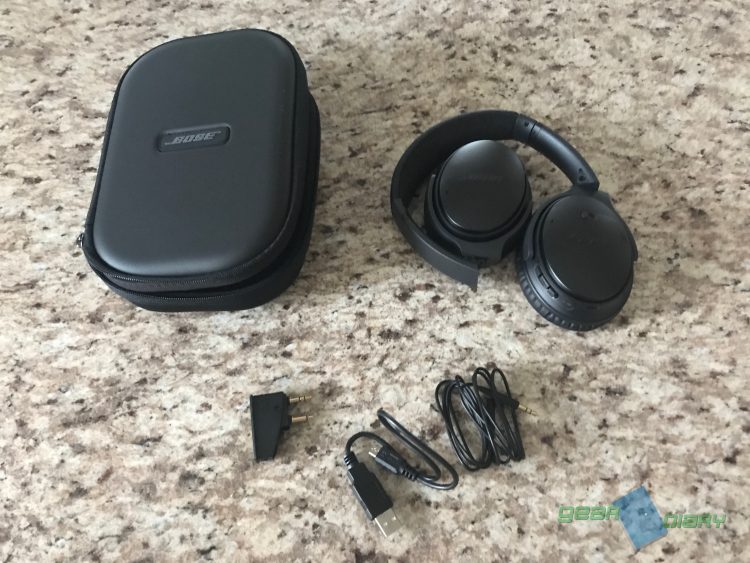 Right away, you notice that the case itself is really nice and feels great to the touch. It zips around the entire case, and once you open it up, the first thing you’re presented with is the gorgeous QC35 headphones folded inside. I will say that Bose made sure to package these $349 headphones so they wouldn’t get damaged; I appreciate them wrapping them in bonus material even when inside of the case. To the left of the case, you’ll find a slot that can house the included micro-USB cable and the 3.5mm headphone jack that you can use when you are not directly connected to Bluetooth. This is a great feature to have when you’re on a long flight and don’t want to rely on your Bluetooth to get you through. In my case, since I have an iPhone 7 Plus, I ended up switching over to my iPad Pro which still has a headphone jack so I could watch movies without draining battery itself. It’s worth noting as well that if you are connected via the 3.5mm headphone jack, and your device is charging, the QC35s themselves will not charge. 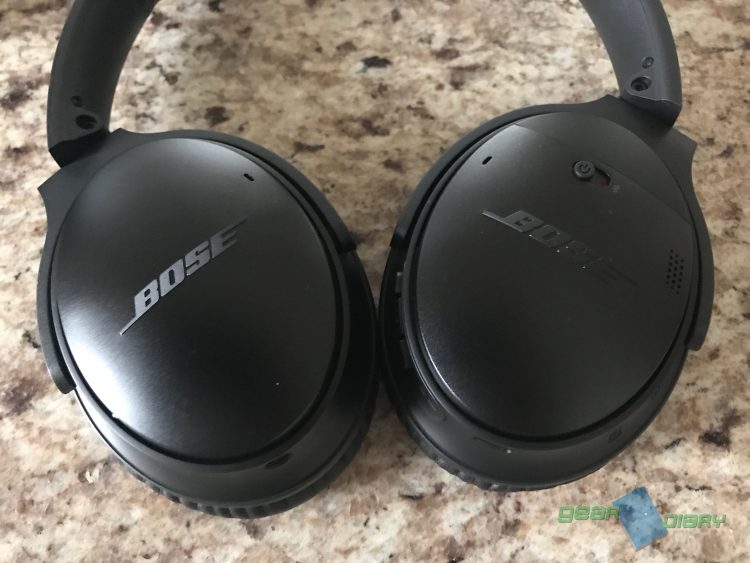 The QC35s themselves though look stunning, however. On the inside of each earcup, you get an “L” or “R” signifying which ear cup to use which is actually pretty helpful especially if you’re pulling out of a bag and forget which side they go onto. Both ear cups feature a nice leather ear band complete with memory foam like material inside that allow for maximum comfort even for extended periods of wearing. 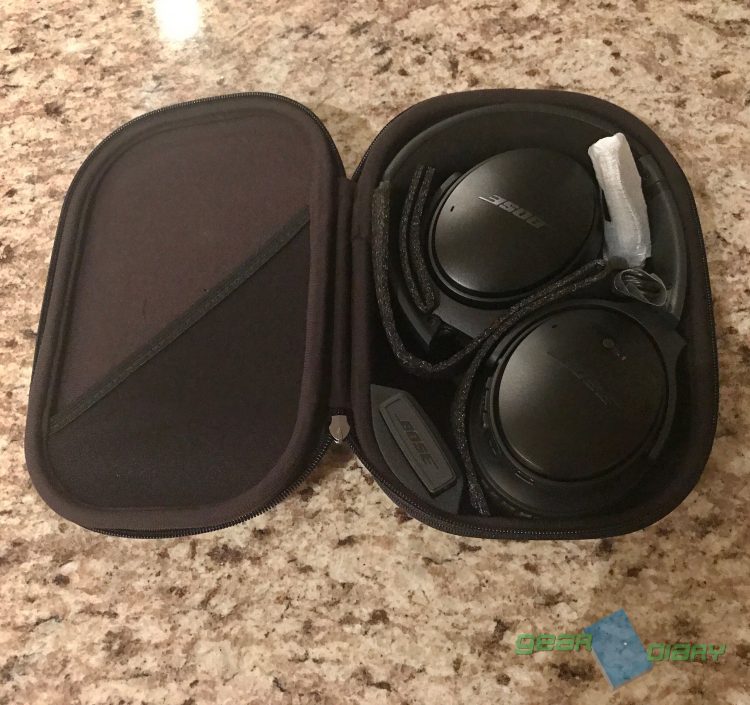 The left ear cup doesn’t have much at all going with it, as there is only the 3.5mm headphone jack at the base of the ear cup. 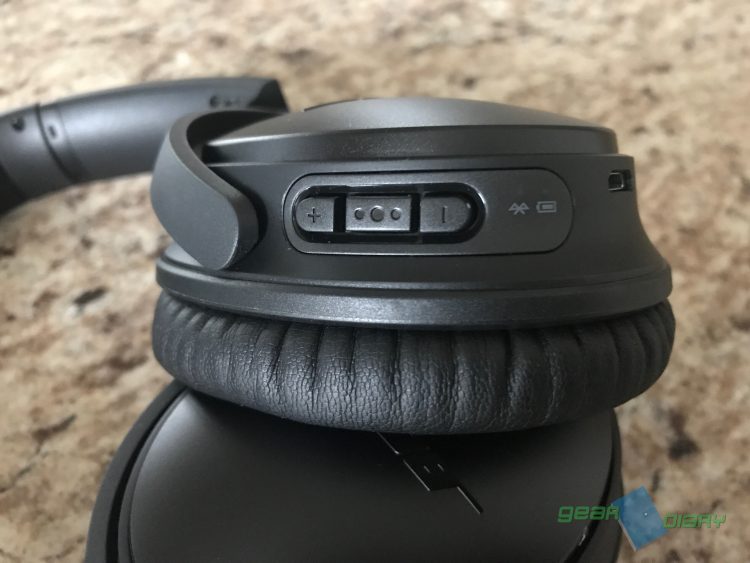 On the right earcup, you get buttons to adjust your volume as well as answering calls. This is very helpful when your phone is in your bag and you want to quickly make sure you don’t miss that important call, or even when you just want to change a song track. Beneath that are two indicator lights, one letting you know that your device is paired to the headphones, with the second being an actual battery indicator. On the outside of the QC35s is obviously the power button that when off has a red indicator, and when turned on, it is green. 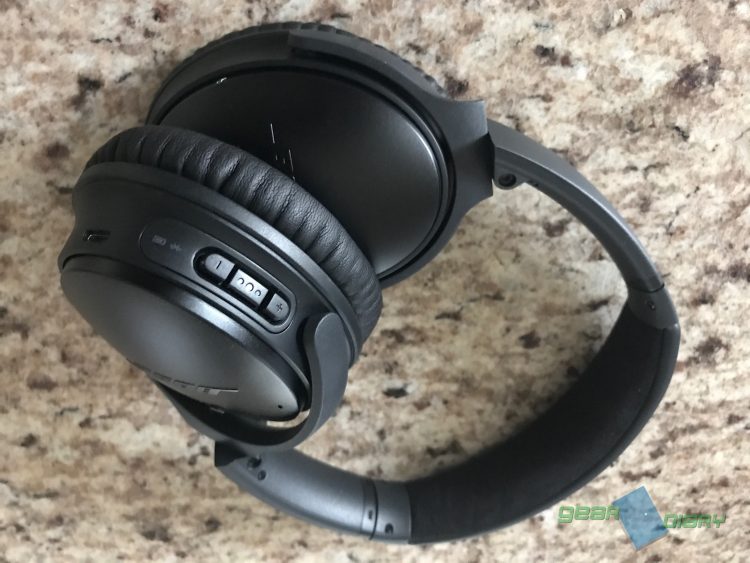 Compared to the QC25s which didn’t have the controls built directly into the headset, I have to say, I’m glad Bose listened to the thousands of buyers of their product and opted to have the designated controls on the headset. Also, now there are no batteries that you’ll need to change which was always a pet peeve of mine in the previous model. 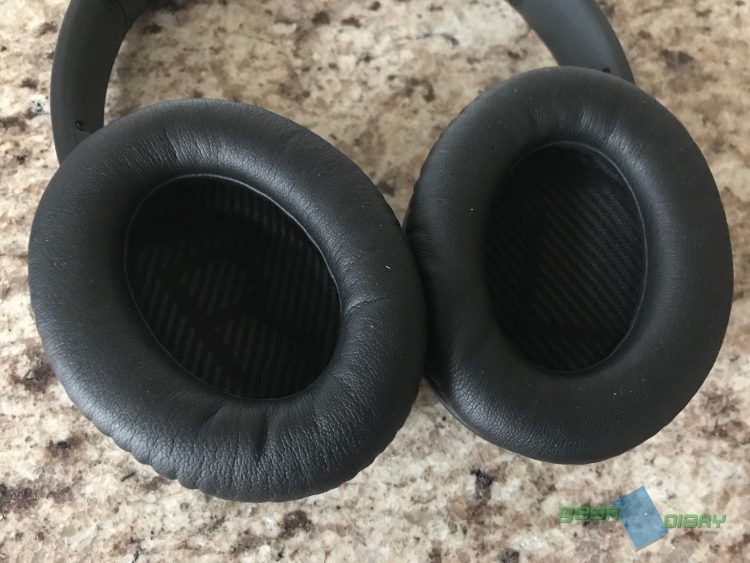 Not only does it look better, but aesthetically it’s just a bit more functional, especially if you plan on using these in the gym. And if you do.. luckily you can find replacement ear cups for when they get worn out over time. Bose does suggest if you do plan on using these for workouts, to simply wipe down the ear cups or else the leather will get worn out quickly if you do not. 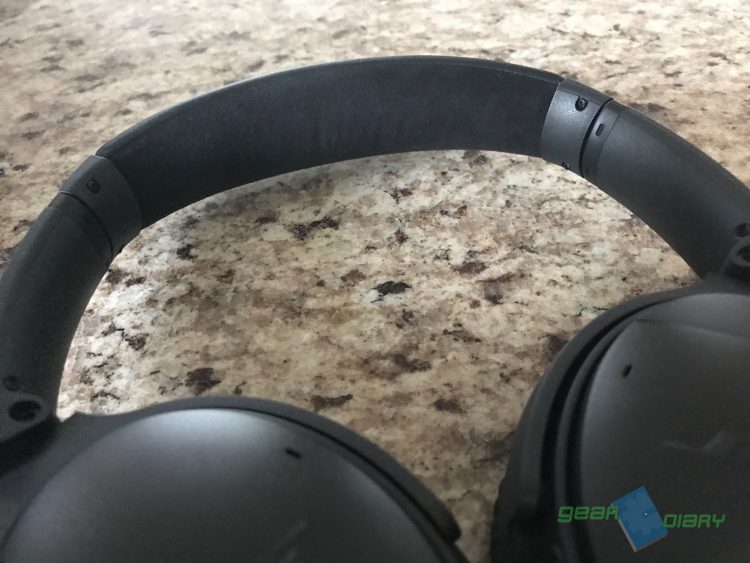 The headband for the QC35s is super sturdy, mainly because it’s built from a reinforced stainless steel which adds to the already amazing build quality. The headband itself is also covered in leather, with the crown of your head protected by a flexible yet breathable foam band.

Typically I pair via Bluetooth on both my iPad and iPhone, and it’s nice that similar to Apple’s Airports, it initially remembers your devices, and will announce the name of the device it’s connected to with a pleasant female voice saying things such as ‘Connected to Greg’s iPhone 7 Plus’. There are even cases where if I have multiple devices connected to Bluetooth nearby, it will pair to both, but only pick from the first one you decide to play audio from. So, for example, you’re on your iPad which is connected to Bluetooth, however, you are listening to a Podcast on your iPhone 7 Plus. The Bose QC35s actually distinguish which device is the priority and pairs automatically to the iPhone. If you choose to use the iPad afterward, you can always just disconnect your Bluetooth using your device’s settings. 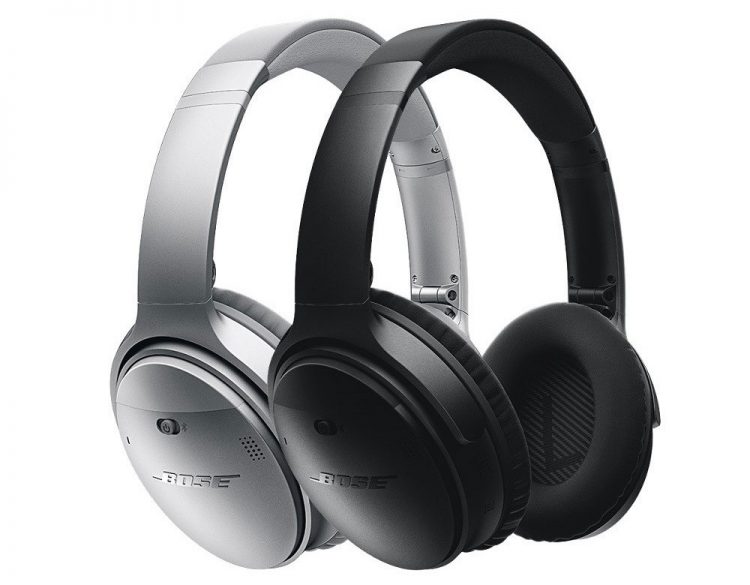 In terms of overall listening quality, I’ve yet to find a pair of headphones that can match the QC35s, and trust me, I’ve tried plenty. When listening on a crowded metro train, I found that the QC35s actually have sensors inside of the mics which actually listen for outside noise and are able to differentiate the tunes that you are listening to according to your surroundings and using the noise-cancellation features, can get rid of ambient noises around you. So now when you have that pesky person a few seats away from you talking loudly on their smartphone, you can feel at ease listening to music, podcasts, or even your own ambient noises to tune them out.

If you do plan on using the Bose QC35s for phone calls, the same software that allows noise-cancellation works in the same manner, as you’ll be able to listen to the person on the other end without having to repeat yourself thanks to Bose’s Noise-Rejection system.

Over the past month and change, I’ve absolutely loved using the Bose QC35s, especially as an iPhone 7 Plus user who unfortunately doesn’t have a headphone jack. If you’re looking forward to ditching the wires, and you want to start from the top instead of going through a trial and error of more-than-good quality Bluetooth Wireless headphones, there are not really many places you should start other than the Bose QuietComfort 35’s. Price tag aside, they are comfortable, stylish, and even though Bose is a brand, and I’m typically not one to hype up a brand that already is marketing on every Sunday Night Football game, Bose is onto something with the QC35s, and I’m glad to say my search for great headphones has (for now), stopped.

EBags.com is a great resource for purchasing any travel accessory you can think of, and with the Bose QC35’s, they may be the only audio headphones you’ll need for the long flight of yours. EBags.com also sells Bluetooth speakers, travel packs, luggage and more.

For more information on the Bose QuietComfort 35’s or to purchase, check out EBags.com!

What I Like: Overall build quality is substantial and comfortable; Noise Cancelling is the best I’ve personally used

What Needs Improvement: $349.99 is a high asking price; Could use more colors