The Kia Stinger GT is designed for long-distance motoring, but it’s also designed to be used in high-performance situations, so they worked very closely with their seat designers and engineers to develop a seat package that could fulfill both of those promises. The driver’s seat has a 16-way and 12-way front seat for the driver and passenger. Kia added an air-cell lumbar adjustable bolster, which is new for them; you can pull the bolsters in to give you extra support when hugging curves, or you can move them out for a more laid-back, comfortable ride.

The Stinger also has a heads-up display that shows the speed limit along with your speed, turn by turn navigation, distance to the next turn, and blind spot detection.

Worth pointing out is that the Stinger is Kia’s first front wheel drive car that is also available in AWD on both the 4-cylinder and the V6 model. The all-wheel-drive system was specifically designed around this car; it is sport oriented, and it is capable of shifting up to 50% of the torque to the front axle. It is controlled by an electronically controlled rear coupling.

The Stinger has five distinct drive modes that you can select with the simple twist of a knob, and it is aerodynamic; it has functional air vents on the sides which allows air to pass through the front and distribute on either side of the wheel well. It allows the air to flow out on the outside of the wheel well, mainly to control the turbulence that forms on the outside of the wheels when you’re going very fast, but more importantly, it deflects air over the brakes on the inside, which helps greatly on the cooling performance.

One of the other challenges that Kia faced was airflow traveling over and under the car when the vehicle was going at top speeds. At 167 mph, it is critical to manage the downforce on the vehicle. Kia considered several different solutions — they looked at what Audi and Porsche use, which is an extendable rear spoiler — but those type spoilers are relatively heavy, they have a relatively complex mechanical system, and they are also very costly. Kia challenged their engineers to work with the folks in their wind chamber, and they came up with a duck-tail shaped extension on the rear deck lid. It took hundreds of hours to perfect the shape to get the right level of down-force, but the end result is a functional yet elegant solution that delivers the same results as the German premium sedans’ mechanical spoiler.

The Stinger has a full belly pan all the way from the nose to the rear differential to manage airflow and make the vehicle better able to handle turbulence and for aerodynamics. Air ducts in the front direct the flow up and over the powertrain to keep it cool during high-performance conditions.

Stingers come with Michelin Pilot Sport tires that have been specifically tuned for the car; they are great for highway, track, wet conditions, and they offer excellent steering control. But most importantly, Kia wanted to make sure that the tires would last a long time. 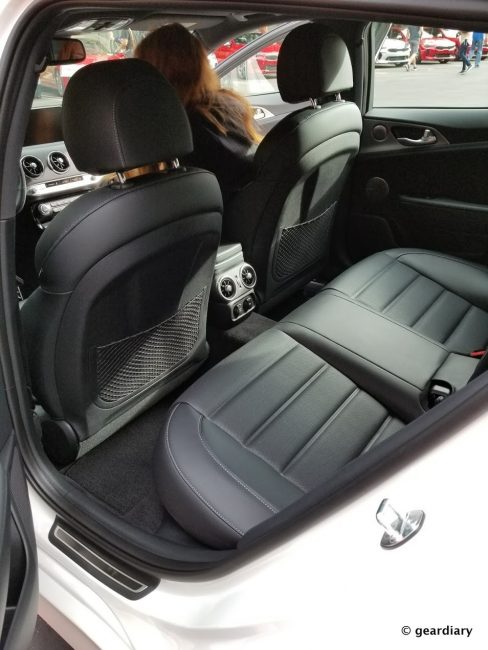 So … all that was left was to drive the beast.

Previous Page2 of 3Next Page