CNBC is reporting that ANOTHER data firm has been suspended for profiting off data they collected from your Facebook accounts. This is likely only the tip of the iceberg. Is it time to consider unfriending Facebook? 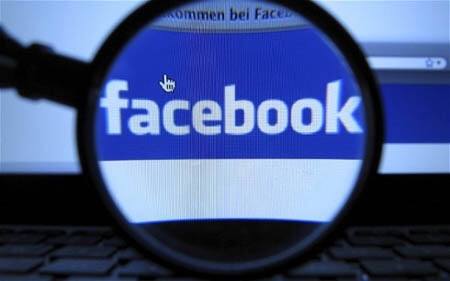 If you’ve taken the “You are what you like” quiz, then a marketing company called “CubeYou” scraped your data and resold it to advertisers. This was not disclosed in the terms of the quiz, and if it sounds familiar, it’s because this is the same issue as the controversy surrounding Cambridge Analytica. One time is unsettling. Two times becomes fairly alarming. And if there are already two that we know of, chances are there are more. In other words, nothing you’ve ever posted to Facebook should be considered even quasi-private.

It’s easy to shrug and say that people should have known this was how Facebook made money, and there was no expectation of privacy there. But that’s a bit like blaming the victims, and it’s also fairly dismissive of the deeper issue, which is that Facebook was never clear about the ways your data was being mined. I know Google tracks my searches and reads my Gmail — but that’s been clear since I signed up for Gmail. Likewise, I know anything I post to Facebook is out in the world and free to be used by Facebook. But there’s a difference between Facebook knowing that I saw a squirrel fall out of a tree once, and a 3rd party using my status updates and some quizzes to determine where I was when I saw the squirrel.

Chances are you’ve taken a quiz or 10 on Facebook. We all have at some point. It’s time to assume every single one of those was and is being used to create a marketing file on you, and more importantly, that scammers may have gotten into that data.

It might seem innocuous that you shared how many states you visited. But now someone trying to scam you knows you’ve been to, say, Wyoming. Maybe that makes you more likely to click-through to a false link about Wyoming that you get emailed later, because hey, you were there last summer, you must have given some random tourist group your email. That’s a big part of the danger here — it’s not just that demographic information is available to everyone, it’s that your personal life, even things that don’t seem relevant, are all part of a larger file that gives someone loads of information about who you are, what you like, where you visit, your politics, and all sorts of other details.

Personally, I think what’s scariest here is that this second leak wasn’t found by Facebook but by CNBC. Once again, Facebook isn’t the one out there getting ahead of this news, they’re reacting after someone pointed it out. Basically, it’s safe to assume that if Facebook were a house, they’re coming home to find it’s been robbed and just now thinking “Oh, well shit. Guess we should have installed doors?”

I don’t know yet what I will be doing about my Facebook profile. My only reason for keeping it is a few private groups (which I now doubt are as secret as they should be) and a group about sesame seed allergies because it’s a handy way to check safe packaged foods. But I do know that I won’t be signing into any apps via Facebook, nor will I be taking any quizzes or sharing anything at all, really. Facebook needs to be a lot clearer about who sees my data and how it gets used, and I am sure I’m not the only person feeling vaguely unsettled (and looking longingly at the days of flip phones!)

If you are interested in seeing what information Facebook has gathered on you — including what apps you’ve authorized to see your Facebook profile, you can start by downloading a copy of your Facebook File by clicking here. Every photo, video, comment, message, or anything else you have ever shared with Facebook will be included in the file, so it may take a while for it to propagate and be ready for download. If you’ve been an active FB user, your file may be several gigabytes.

This is a good time to review all of groups or pages you’ve liked. Go to the MORE section at the top of your timeline. You’ll see a list of things that others see when they click to learn more about you. Uncheck anything you don’t want people perusing. Bear in mind that if you are sharing your favorite books, music, tv shows, and movies — you might be sharing a bit more about yourself than you think. 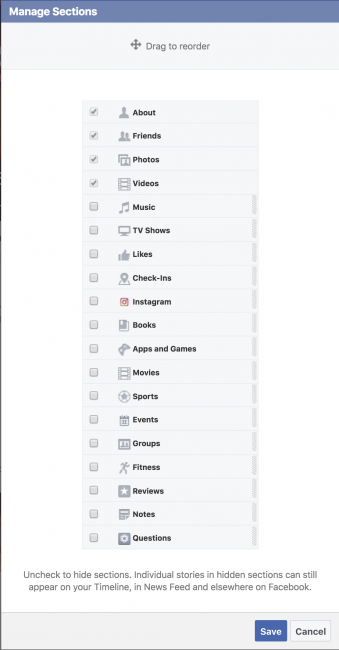 I keep my Likes unchecked — it’s no one’s business what groups or pages I like or follow.

Clean up that Like list a bit, while you’re at it (even if you don’t make it viewable by anyone). Pretend you are a potential employer or a prudish relative and ditch anything that might be weird, overly political, controversial, or hard to explain. 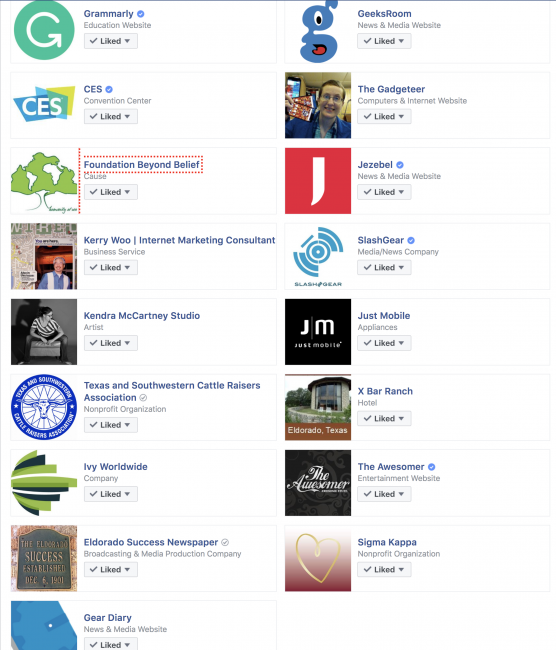 All good, but it’s still not visible to the public or even friends.

You should take a look at which apps you’ve allowed to access your Facebook information, next. Many of them will be apps that you’ve signed into by using your Facebook account, games you’ve played, quiz companies, and others you’ve tied to your account. Look through the list, and clean out anything that isn’t necessary or that you’re unsure of. Many of them will be legit, but if you see anything you aren’t sure of, remove it. If you wind up needing it again, you’ll be directed at that point to re-login; it’s no big deal. 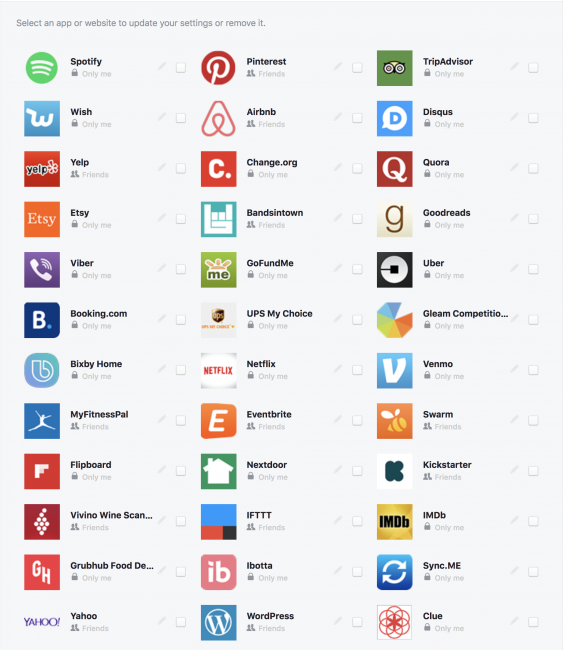 For the apps that you opt to keep, click each one and turn off any settings you aren’t comfortable with the app having. If you like your FB friends being able to find you on Spotify, leave it checked … but does Airbnb really need to know who’s on your friend’s list or what groups and companies you’ve liked on Facebook? Does Uber really need to see your friend list? Or do Flipboard or Yahoo really need to be able to see all the posts and photos you’ve made on FB? Each of the apps collect certain bits of data; you have control to tell them which ones are off-limits. 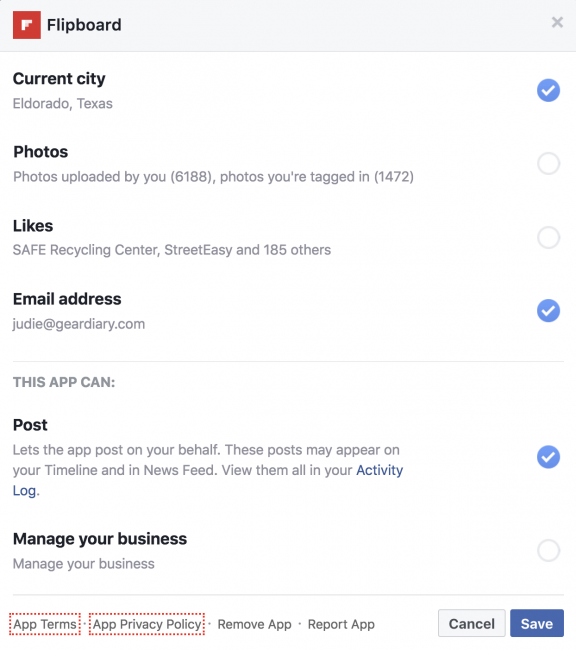 If you want to use the nuclear option on apps being able to use your information, click this button — but be advised that you’ll no longer be able to use FB to log into anything, and that may involve having to create a new way to sign into the accounts you chose to keep. I haven’t opted to do this, but I also check connected apps regularly. 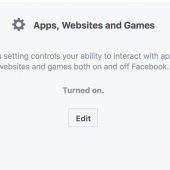 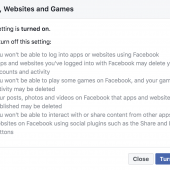 Now take a look your ad preferences. Under your interests, you’ll see a lot of topics that you may or may not realize are being directed to you. Delete them all. Under advertisers you’ve interacted with, you’re going to see a shocking number of things you may or may not have ever clicked. There will also be companies listed that you’ve used Facebook to sign in on their site. Delete them all. There’s no convenient nuclear option; you’ll have to X each one individually, and if may take a little time to get through the whole list. Be sure to hit the more button at the bottom and refresh the page and look again to be sure they are all gone.

Turn these settings to OFF.

You can check and see what other people see when they go to your Facebook page by clicking the “view as” button.

… and then you can enter friend’s names to see what they’ll see on your FB or which photos they’ll be able to access.

Be aware then when you are viewing your timeline in this mode, you won’t see the option or like or comment.

Also, check settings/timeline and tagging. Lock that down to friends only, or friends but not acquaintances if you maintain hardcore privacy controls on your feed.

If people have a bad habit of tagging you in posts that you don’t want to show on your timeline, you can set it so you have the option to review them before they ever appear on your wall. 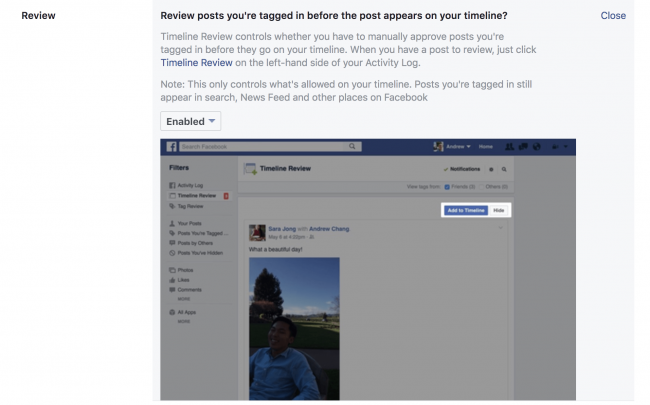 A drastic, yet effective thing you might want to do is to go to your Privacy settings and consider the “Limit Past Posts” option. If you have shared a lot of things with the public and with friends of friends in the past, it’s not a bad idea to go ahead and change all of it to friends only. I had a ton of photos that at one point were public; clicking this set them all to friends only without me having to go back in and change them individually.

If you’re on Facebook, you have already opted to give up a bit of your privacy, but you can absolutely control how much of it you are willing to give up — just stop answering those quizzes!!