I stopped visiting Facebook about 2 weeks ago. It wasn’t a conscious declaration, it was just that I felt like Facebook was becoming a crutch to distract me, and it wasn’t something I enjoyed. I probably would have drifted back sooner, but Facebook has been inundating me with emails like a needy ex, and it’s starting to creep me out enough to not want to return. 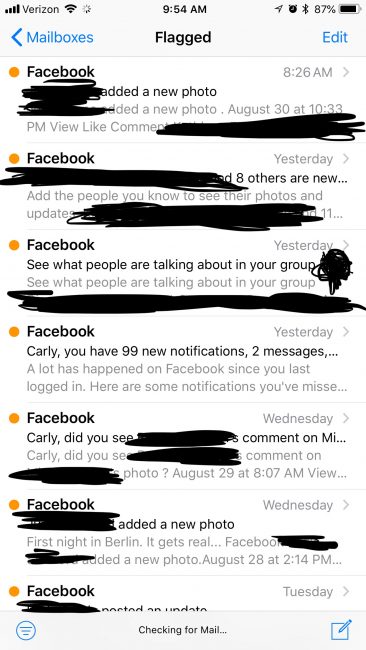 Honestly, I didn’t realize I hadn’t been on Facebook until the emails started. First, it was an email asking if I’d seen a friend’s post. Then less than an hour later, I got asked if I’d seen that same friend’s photo. Followed by an email telling me all the notifications I was missing. In total, since 8-15, I’ve received 30 emails from Facebook attempting to give me severe FOMO. Instead, it’s made me wonder why I bother with Facebook at all.

Here’s the thing: it tells me I’m missing out on updates from a friend from college. All that did was make me want to contact my friend directly, not stalk her Facebook page. I don’t need to see every update my great-aunt or ex-sister-in-law posts, despite what Facebook’s algorithm might claim. And it really bothers me that Facebook is pushing me to see what I’ve missed on private, moderated, invite-only groups; that’s just a reminder that even if your friends can’t see what you wrote, Facebook sure can, and they notice when you’re less active. Also, it sort of defeats the purpose of a private group if Facebook is sending emails that state the name of the private group in the subject, along with the names of members and snippets of their posts…that’s a little scary if you’re part of a group that you don’t want someone to see — even if they can’t get into your Facebook, an email slip could give them all sorts of details. So much for “private” groups, though in hindsight why I ever thought Facebook gave a crap about my privacy is clearly a lack of judgment on my part.

I get that Facebook needs people logging in, that’s their lifeblood. But if I were away on vacation for a month, I’d be pretty angry to come back and discover Facebook spammed me 30+ times while I was gone (that’s an average of TWO EMAILS A DAY). Facebook, I’m sorry, but I’m just not into you that way anymore … please take the hint and back off before I unfriend you!