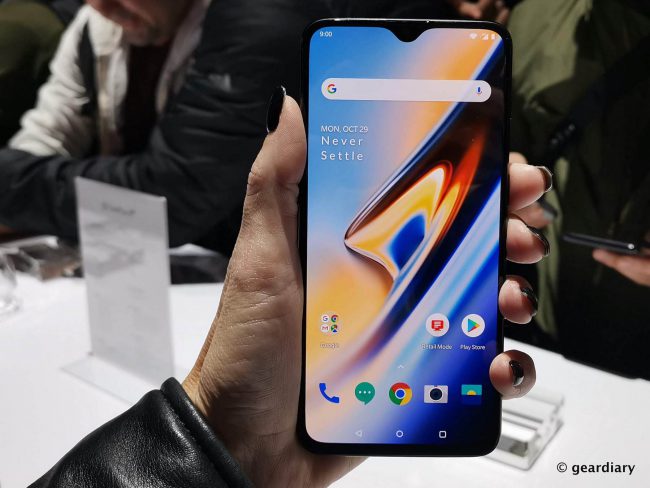 Today, OnePlus announced their brand new OnePlus 6T, and to kick off their new flagship phone, OnePlus is announcing that T-Mobile is their first US wireless partner to carry a OnePlus device in their stores. You’ll finally be able to fondle one in person before buying!

T-Mobile will carry the OnePlus 6T in mirror black with 8GB RAM and 128GB storage. Because this phone will be available from a major carrier, you’ll be able to finance it like you can any other mobile phone; this is also a first. Without any special offers, you’ll be able to finance the OnePlus 6T at T-Mobile for $0 down and $24.17 per month for 24 months with T-Mobile’s Equipment Installment Plan.

Another carrier-related OnePlus first is that T-Mobile customers will be able to get up to $300 off the cost of their phone (a little more than half off!) with an eligible trade. In a bold move, the eligible trade-in devices include all past versions of the OnePlus devices (OnePlus 6, OnePlus 5T, OnePlus 5, OnePlus 3T, OnePlus 3, OnePlus X, OnePlus 2 and OnePlus One) along with other popular mobile phone models — there are over 30 devices eligible for the $300 off deal. With this special offer, you’ll be able to finance the OnePlus 6T for $0 down and $11.67 per month for 24 months on T-Mobile’s EIP with device credits and trade-in. Bear in mind that the T-Mobile OnePlus 6T will have custom firmware optimized for the carrier.

You’ll be able to get the OnePlus 6T nationwide through T-Mobile stores and from T-Mobile.com starting on November 1st at 6 am ET.

Folks in the NYC area got a special surprise today because at 5 pm ET, OnePlus took over the Times Square T-Mobile signature store. This marked the first place anyone could purchase the OnePlus 6T anywhere, and by doing so, they got it a few days ahead of everyone else. We were told that the first 100 people to purchase at the T-Mobile / OnePlus Times Square pop-up shop would also get a special bit of swag.

Speaking of swag, be sure to read to the end because I am about to make one OnePlus lover extremely happy …

So that’s the carrier news; let’s talk about the new OnePlus 6T!

The OnePlus 6T has a minimalistic design which is classic and timeless; the design is slim and light. The 6T has a 6.41″ Optic AMOLED screen with a small notch and a smaller chin. The screen has a 19.5:9 ratio with a 2240×1080 resolution and 402 ppi. 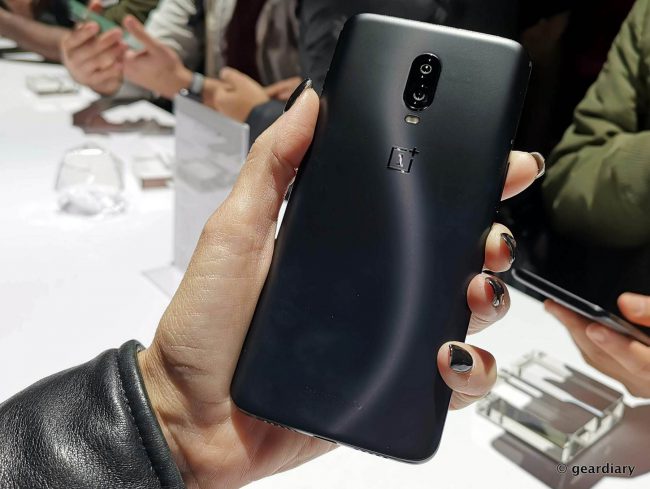 The OnePlus 6T rear cameras can capture 4K video footage at 60 frames per second, and Super Slow Motion at 1080p and 240fps/720p and 480fps. Google Lens is also included as standard in the user interface.

The front-facing camera is 16-megapixel (f/2.0), with Electronic Image Stabilization.

Because taking pictures in low light or at night is so tricky, OnePlus is introducing Nightscape, their new HDR algorithm that takes two seconds to capture a photo and renders a much clearer photo in poor light situations. Even better, if y0u already own a OnePlus 6, you’ll get the Nightscape update later this week. Rear camera portrait photos will be enhanced with Studio Lighting, a feature fine-tuned in conjunction with Kevin Abosch, a critically acclaimed professional portrait photographer, to “recognize faces and adjust the lighting
accordingly to simulate professional lighting.”

OnePlus continues their loyalty to the Qualcomm Snapdragon 800 series with the 6T. The 6T features the Snapdragon 845 processor and SmartBoost that will enable you to get up to a 20% faster load time on games and intense apps. The main takeaway OnePlus wants you to get when using the 6T is that it is “fast and smooth.” The 6T also has a 3,700mAh battery, which is 23% larger than the 6 (which was 3,300mAh).

There’s no home button or fingerprint button on the rear, so you might be wondering how you unlock it. OnePlus is taking advantage of a fingerprint screen unlock mechanism that is buried in the front display; “you press on the screen and the light will read your fingerprints.” The 6T is the first smartphone to be released in the US that has screen unlock embedded in the display. OnePlus engineers spent a lot of time to make sure that the screen unlock was fast and accurate — they are saying it takes just 0.34 seconds to work, and it will become even faster and more responsive the more you use it, as it “learns” your fingerprints. They are also saying that this method is just as secure as the fingerprint sensor on the OnePlus 6.

Display: 6.41″ (The corners of the screen are within a standard rectangle. Measured diagonally, the screen size is 6.41 inches in the full rectangle and 6.24 inches accounting for the rounded corners)

There will be at least three versions of the OnePlus available: the T-Mobile version mentioned above, which will cost $549 (you can unlock it for an additional $40); an unlocked 6T in mirror black or midnight black that comes with 6GB RAM and 128GB of ROM that will cost $579, and an unlocked midnight black 8GB RAM version with 256GB ROM that will cost $629; the latter two versions will sell directly from the OnePlus 6T site.