Twelve South makes accessories for Apple devices that are always simple, thoughtful and well-made. I’ve been a fan for years. The latest Twelve South offering is the PowerPic. It’s yet another wireless phone charger, but this one has a rather smart twist that puts it into the category of, “Now why didn’t I think of that.” Let’s take a look. 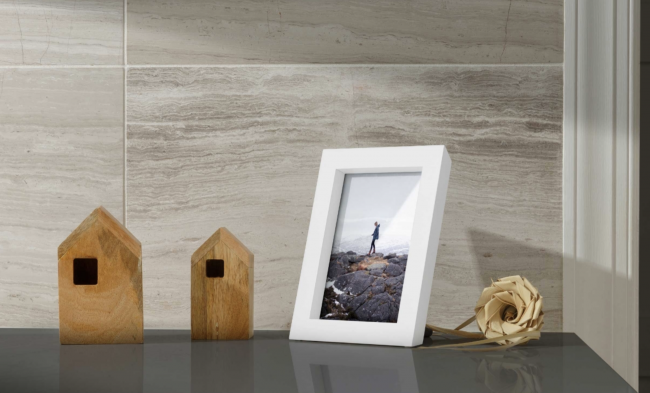 Twelve South describes their latest creation as, “the frame that wirelessly charges your phone.” And while the statement is accurate, it doesn’t capture the true brilliance of this otherwise simple idea. Before we dig more deeply into that, let’s step back and talk about wireless charging. 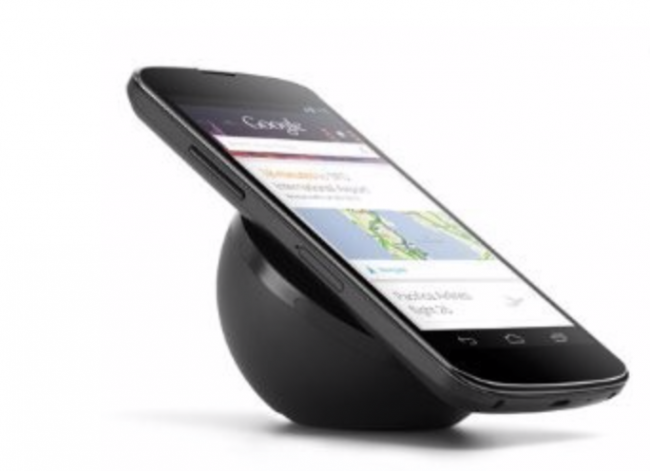 There were phones with wireless charging for some time before Apple jumped into the Qi-enabled waters. (Remember the Palm Pre, Lumia 920 and Nexus 4?) It’s no surprise however that wireless charging took off after Apple joined the club. 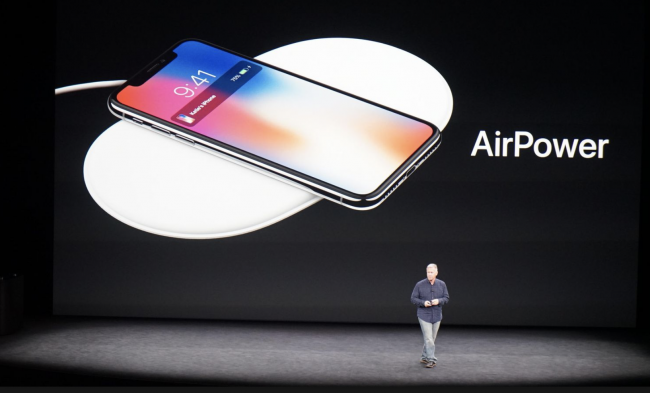 The “Apple-effect” meant pretty much every accessory manufacture began releasing wireless chargers. As is often the case with a new market, the initial offerings had a fairly utilitarian design. There were low-profile chargers that required you to lay your phone on top of a flat surface. There were chargers that cradled your phone while it charges so you could still see the screen. A few companies even took the “leap” and released chargers that could be used both ways. Lots of chargers hit the market, but most were pretty basic. Few, if any, offered fast charging.

Things have moved pretty significantly since then. Most of the chargers I’ve seen recently are equipped with Fast Charging so the wireless charger will match the maximum charging speed the phone placed on top of it can handle. Moreover, companies have begun using premium materials like leather and have brought their design expertise to these modern “necessities.” Said a bit differently, in a short amount of time, wireless chargers have gone from ugly-but-convenient desk clutter to something that looks nice on your table or desk. 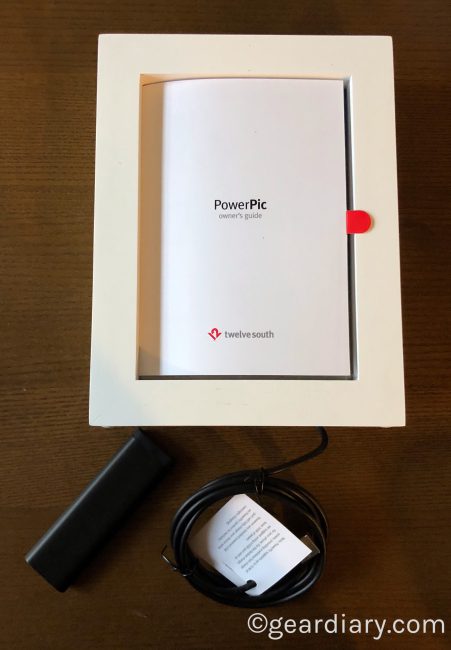 Twelve South took a different approach when designing the PowerPic. Rather than create a cool wireless charger, Twelve South decided to take a picture frame, something that is already on most desks and tables and added wireless charging to it. 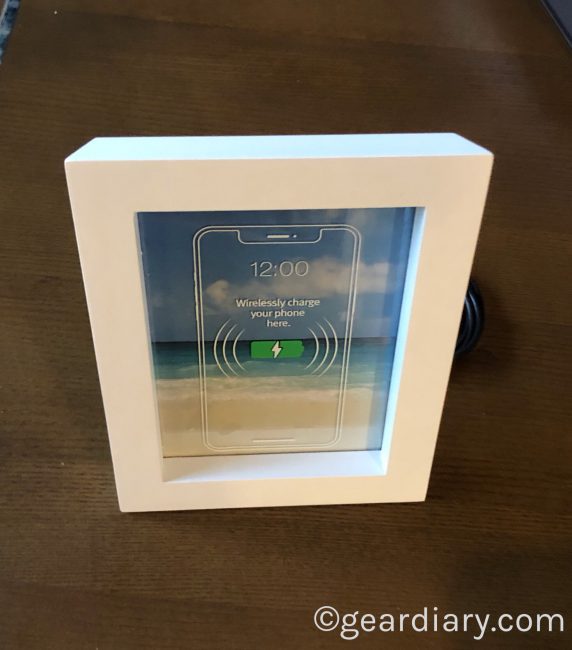 See a family photo instead of a phone charger or cable: Wouldn’t you rather see a cute photo of your dog instead of another charger? PowerPic is for you. This wooden picture frame, with a wireless charger hidden inside, naturally blends into your home or office. Your favorite picture will instantly become the only way you’ll want to charge your phone.

The PowerPic is specifically designed for the various iPhones equipped with wireless charging, but it can work with phones from other manufacturers, too.

The company describes their new offering this way:

Looking for a wireless phone charger that looks perfectly natural in your home or office? Feast your eyes on PowerPic, the picture frame that wirelessly charges your phone. PowerPic has a Qi charger hidden inside capable of providing up to 10 watts of fast charging power to your phone. Just set any phone that can be charged wirelessly against the photo to begin charging. PowerPic even works with phone cases up to 3mm thick. The contemporary frame is made of New Zealand Pine and holds any 5” x 7” photo. PowerPic is, hands down, the best looking wireless phone charger that you’ll never see.

That pretty much sums the PowerPic up. It isn’t a radical idea but, then again, neither you nor I thought of it. So, let’s give credit where credit is due. 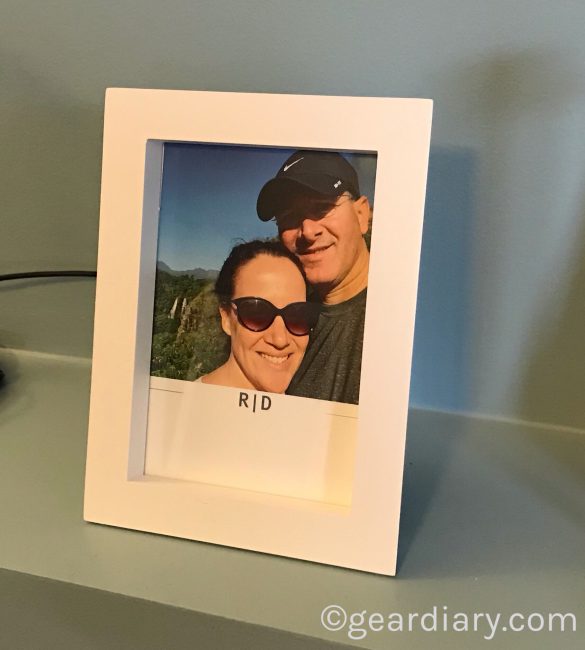 From the front, someone who is not familiar with the PowerPic will simply think it is a simple, wood frame painted in your choice of either white or black. Sure, the wood frame does appear to be far thicker than necessary, but I don’t expect many people would even notice that. This thick frame is, of course, necessary so there is enough space to hold your phone when you put it on/in the frame for charging. 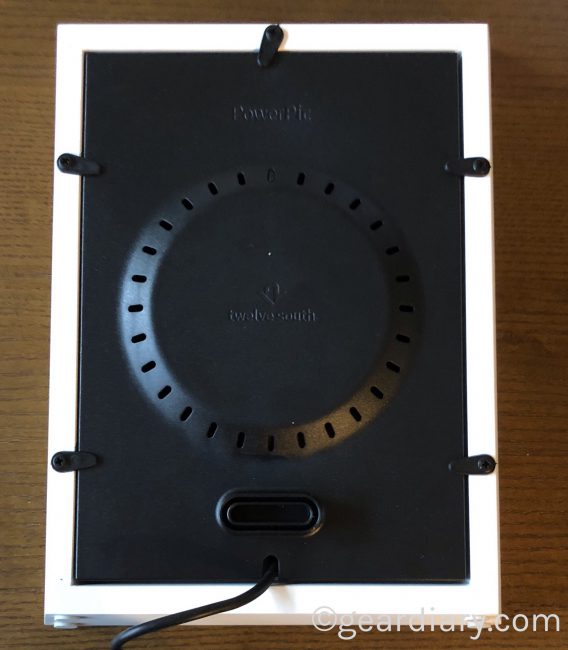 From the back, it is clear that this frame is a bit different. It has the small, black clips that allow you to release the backing plate and swap out the picture but the backing plate itself is different. It has a raised circle, a series of openings surrounding it, an indicator light and a card coming from it. All of this is, of course, part of the Qi wireless charging system. 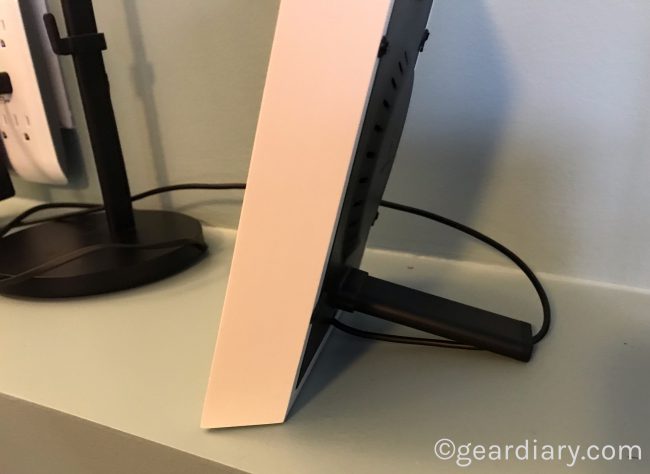 The cord running from the frame ends in a USB-A plug. Unfortunately, Twelve South doesn’t include a wall adapter. At first, I thought this was a fairly cheap move. After all, the PowerPic is just shy of $80. The more I thought about it thought, the more it made sense. Many people who use the PowerPic at their desk will likely opt to plug it into a computer. Many others will plug it into a power strip and wall plate that already have USB ports. In other words, only some of the people who purchase the PowerPic will need a wall adapter. By not including one, the company not only saved a few dollars but they also saved a lot of wall adapters from being tossed into the trash without being used for a minute.

Not just another pretty frame: PowerPic wirelessly charges any Qi-enabled phone, and enables up to 10 watts for wireless fast charging. A small status light on the back of the frame lets you know when your phone is fully charged and alerts you if a foreign object, like a bank card with a chip, is preventing your phone from charging properly. The PowerPic USB cable can be plugged into any USB outlet, computer or phone adapter.

The Qi wireless charging built into the PowerPic is standard fare. It works with a wide range of Qi-enabled smartphones and, if the phone in question can handle it, can deliver up to 10W of wireless power. 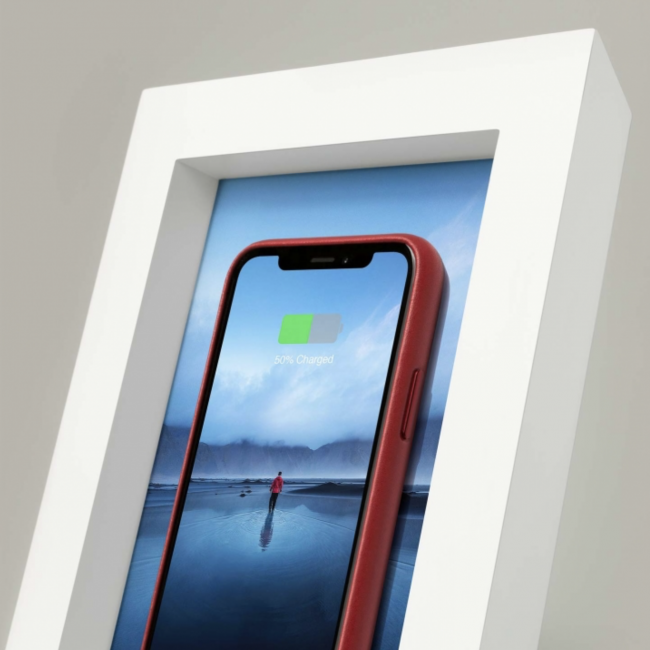 Works with cases, just in case: Do you protect your expensive phone with a case? No problem. PowerPic will charge through most popular phone cases up to 3mm thick, including Apple iPhone cases and the Twelve South Journal.

It is powerful enough to charge your phone even when it is in a case as much as 3mm thick. And it has foreign object detection so the wireless charging won’t mistakenly try to charge something unchargeable and, in the process, become a safety or fire hazard.

The New Zealand pine frame will hold any 5″ x 7″ photo, but Twelve South wanted to make this a bit special. The result is something rather cute they call “complete the picture.”

Here’s a fun PowerPic trick. Print a 5”x7” photo of your favorite place, like a lake, and place it in PowerPic. Next, find a selfie or family photo from your lake trip and set that image as your phone’s wallpaper. Then use that phone wallpaper to “complete” the lake photo in PowerPic.

The result, of course, is that when the phone is placed on the frame for charging, the screen saver becomes part of the picture. 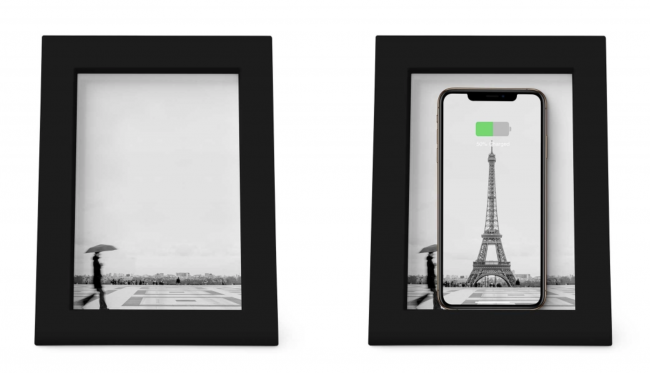 To make things even easier, Twelve South created a few “complete the picture” examples. They include iconic images from the Eiffel Tower, the Rockefeller Center Christmas tree, etc.

The PowerPic is rather cool. I love the fact that an everyday item such as a picture frame can be turned into a smartphone charger. It means there is one less thing on my desk at work, and I still have easy access to the most convenient way to charge my phone. I was so excited to check it out that I used a photo that, while 5”X7”, has too much blank space at the bottom. Since I didn’t have any other options at home, and I wanted this review up as quickly as possible (I mean seriously, this thing will be a great holiday gift!!!), I used the picture. When not in “use” it looks like this. 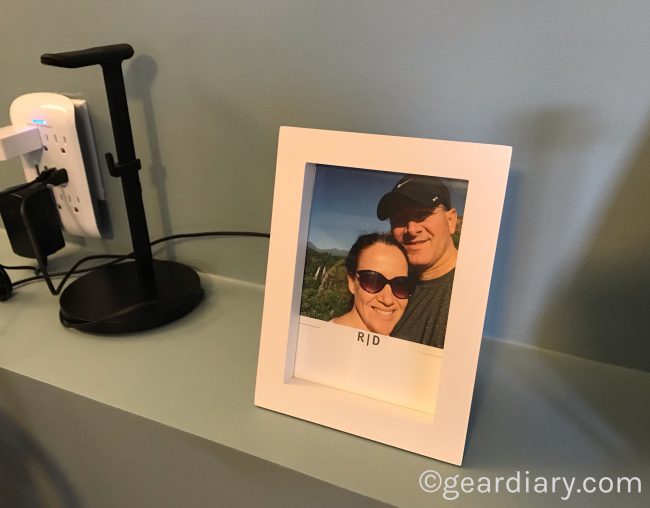 Yes, that headphone stand is one of Twelve South’s other awesome products.

When used to charge my phone, however, it looks like this. 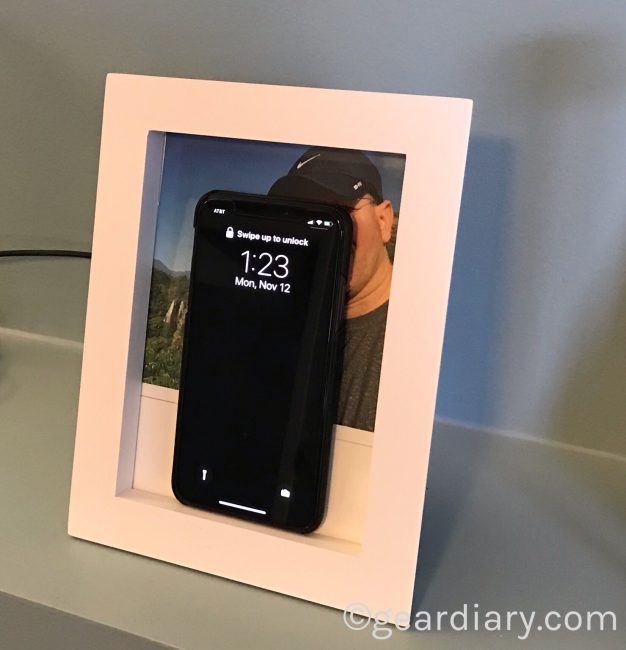 Sure, it isn’t the best-looking thing in the world, but I decided that, were I to make use of Twelve South’s “complete the picture” trick, I might forget my phone. This way, when I get up from my desk, there is a big, dark rectangle blocking the picture and reminding me to take my phone.

I like the PowerPic, and think it will make an awesome gift this holiday season. You can, for example, purchase one for a loved one you know is getting a new phone with wireless charging, slip a picture of yourself into the frame, and watch them smile when they realize they received a gift that not only reminds them of you but also makes sure your phone is always charged when you try to call.

The Twelve South PowerPic is great… but not perfect. It does exactly what it promises. It holds any 5”X7” picture in a simple black or white frame that won’t pull attention from the image you want to display. It charges your Qi-enabled phone when you place it into the frame and if you want to go to the added effort while charging your phone can become part of the picture. Still, because of the design, the frame can only be used in portrait (if you place it in landscape there isn’t enough height for any of the new iPhones) and I wish they had included an extra power port at the back. 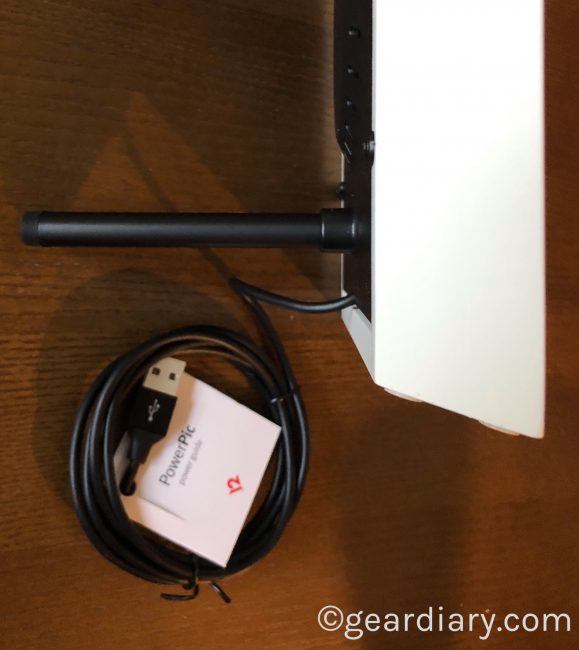 The PowerPic has to be plugged into an outlet or computer so why not add the option to charge an additional accessory? Those two caveat’s aside; I’m a fan of this product and, at $79.99, think it will make an awesome, albeit not inexpensive, gift. Check it out here.

What I Like: Minimalist frame holds any 5” by 7” picture so long as it is oriented vertically; Qi-wireless charger sits at the back of the frame waiting to charge your device; Frame is thick enough to hold the phone securely

What Needs Improvement: No wall adapter included; Only usable in portrait orientation; No extra USB port to power other accessories