We’ve seen an abundance of wireless charging solutions for phones such as the current generation of Apple iPhones, Samsung Galaxy phones and similarly Qi-enabled devices but while many work, most look fairly utilitarian. The mophie charge stream desk stand stands out thanks to its style, but it is much more than that. It’s a fast, stylish and flexible wireless charger. 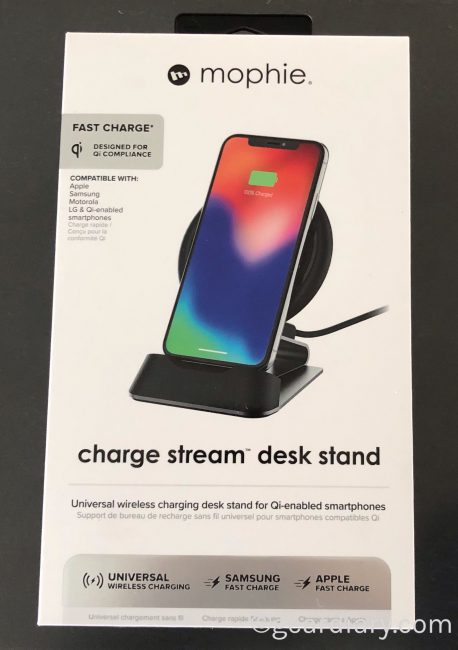 Inside the box, the charge stream desk stand comes with a wireless charging pad, a metal stands, a QC 2.0 wall adapter, and a 1.49 meter (4.9 ft.) micro USB cable with an integrated wire-management magnet. It’s everything you’ll need to charge your phone right out of the box and, thanks to its thoughtful design, can be used in a variety of different ways. 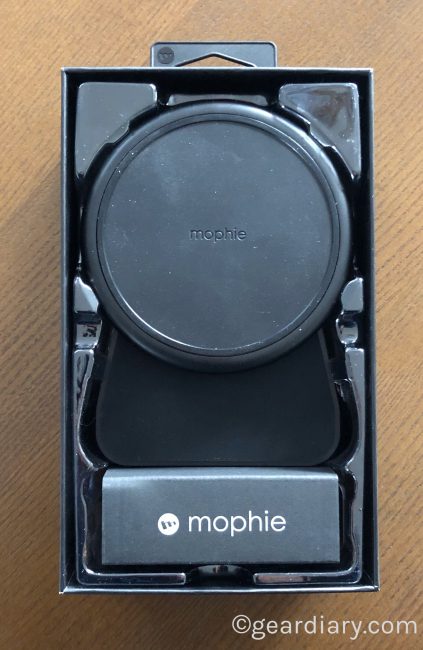 At an MSRP of $69.95 the charge stream desk stand is a bit more expensive compared to some of the other wireless chargers currently available but, the more you dig into it, the clearer it becomes that its sub-$70 price tag is reasonable. 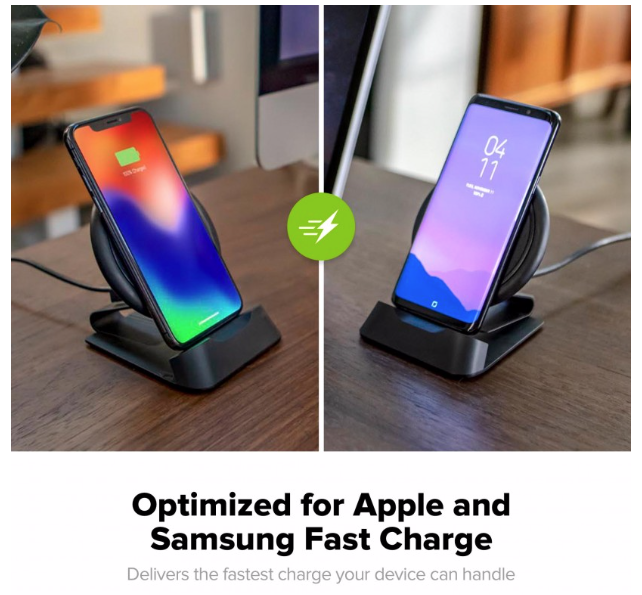 Universal Wireless Charging: Optimized for Apple and Samsung Fast Charge, the charge stream desk stand delivers up to 10W of wireless power to your smartphone at the fastest speed it can handle. 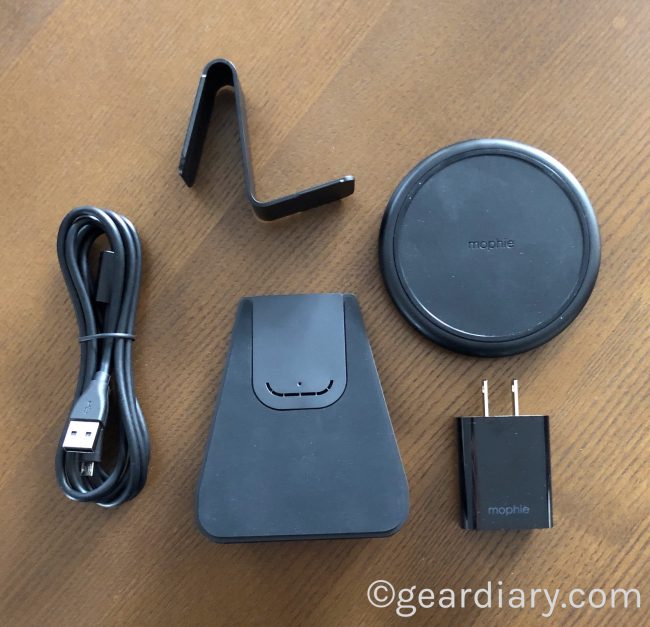 What makes this charging solution stand out of the metal and rubber base that is included in the package. 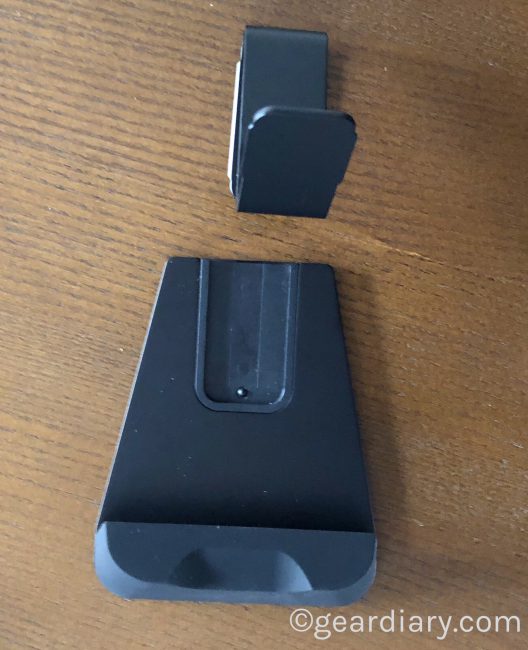 The weighted metal base has a rubber base on the bottom. This not only protects the surface upon which it is placed but also keeps it from slipping or moving accidentally. 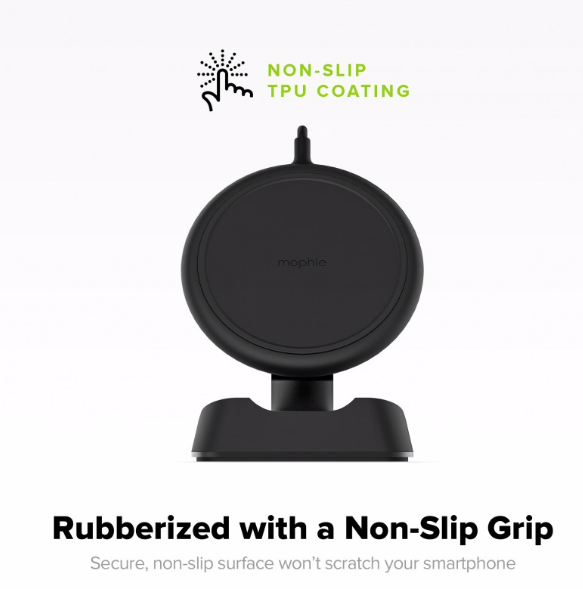 At the front of the metal base is a piece of thick rubber upon which the phone you are charging rests. The hard rubber is strong enough that it doesn’t flex under pressure but has just enough “give” that your phone won’t side around. 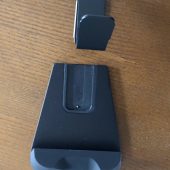 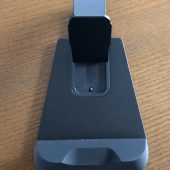 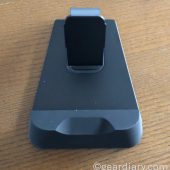 Sturdy Construction, Removable Charging Pad: The steel frame has a weighted base that keeps the desk stand stable and upright. The charge pad can be removed from the desk stand and used independently. 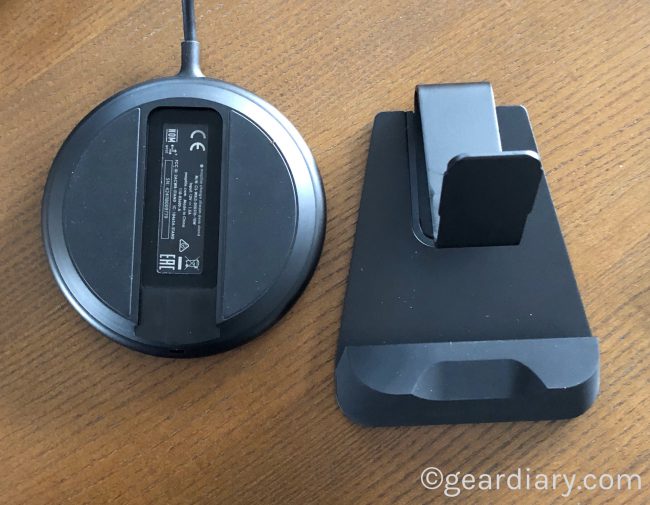 The final “piece” of this system is an S-shaped piece of metal. One side slides into the base while the other fits into a space at the back of the charging pad. This turns the flat charge pad into a stand that can hold your phone vertically while charging.

Maintain Full Functionality: Maintain full functionality of your phone and access to your favorite features while charging. The charge stream desk stand holds your phone at a convenient viewing angle while it charges. 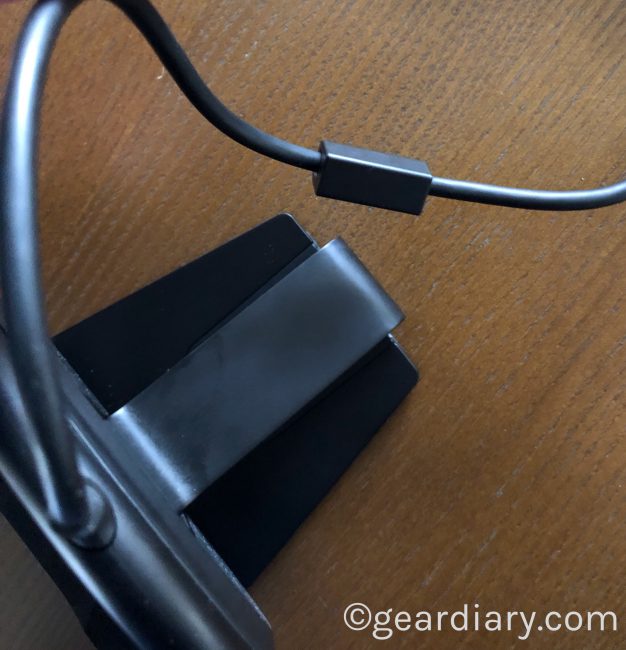 A small piece of rubber with a magnet embedded inside surrounds the power cable. 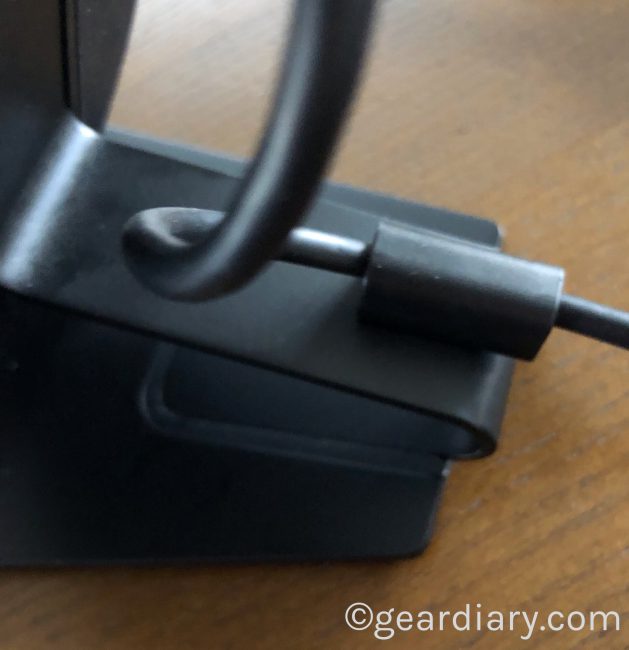 It can connect to any part of the metal brace thereby keeping the cable controlled and out of the way. 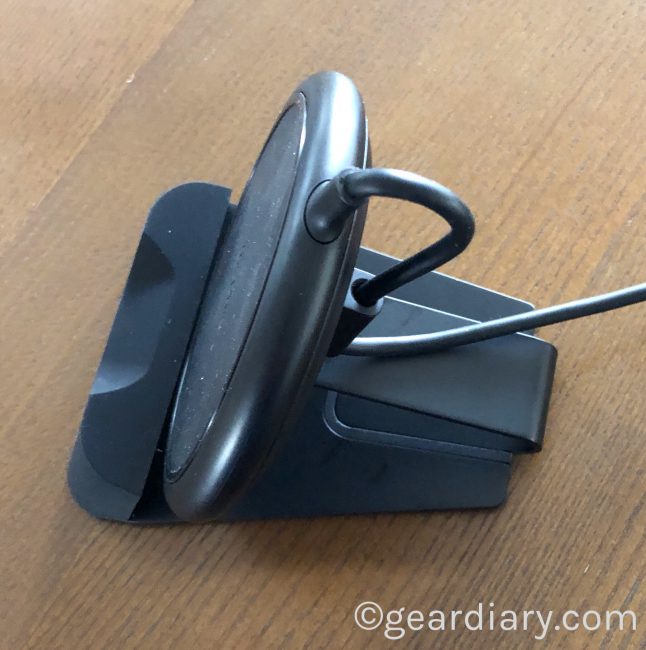 It is a small design feature but one that reflects the amount of thought that went into designing this charger. 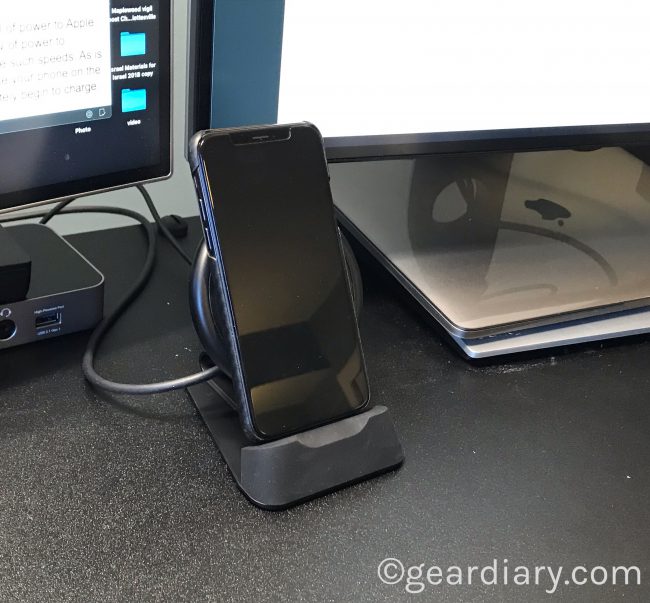 The design holds your phone at just enough of an angle to make it viewable which charging. 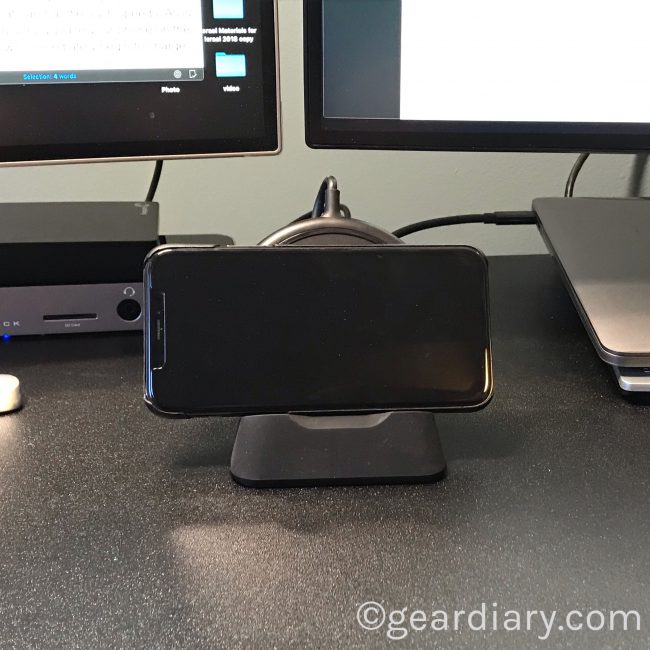 When the charging plate is in its lowest positions, you can also place your phone horizontally on the charge stream desk stand. As mophie states,

I like having the option to charge the phone in either landscape or portrait orientation. It is one aspect of this charger that is rather uncommon when compared to other wireless chargers. At the same time, I don’t like the fact that each time you change the orientation of the phone you need to adjust the height of the charging pad in relationship to the base. I expected that to be the case when going from landscape to portrait but I didn’t expect that, when moving back to a portrait orientation, you need to place the phone on the dock and then move the charging base up and down until it connects wirelessly. That isn’t an issue if you use the same phone and keep it in the same orientation each time you place it on the charger but can become an annoyance if you frequently change devices or orientation. 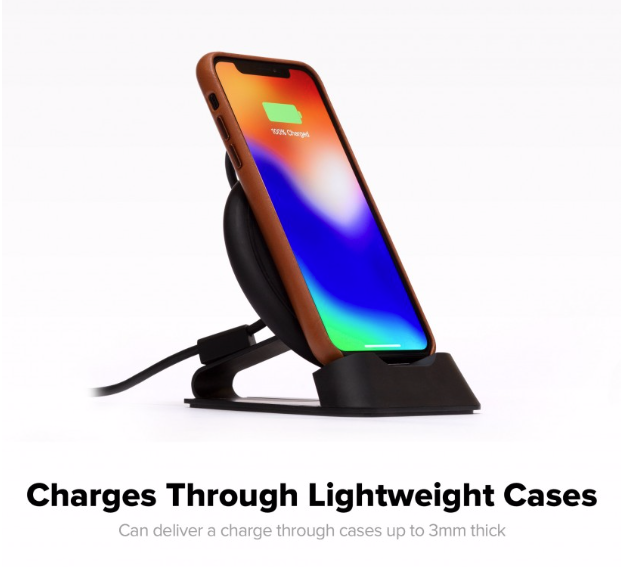 Finally, it is worth noting that the charge stream desk stand is powerful enough to charge phones that are in protective cases up to 3mm thick. That means that, so long as the case isn’t too thick, you don’t need to remove your phone from it when it is time to recharge it. 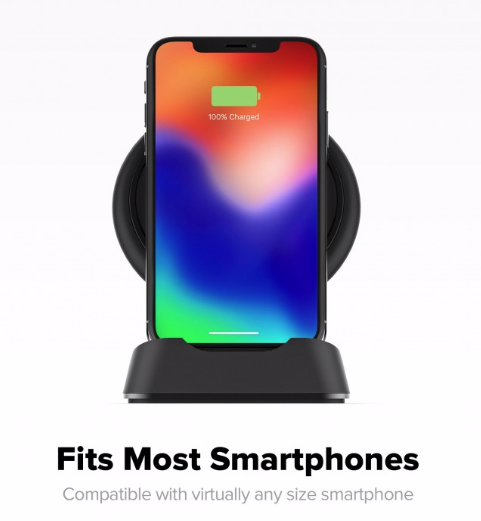 So long as your phone has enabled for Qi-wireless charging, this mophie charger will be the right charger for you. More than that, however, if you are considering purchasing a wireless charger for a loved one but aren’t sure what phone they have, this charger is. A great option since it will work with whatever it is they have… or plan to get. Check it, and mophie’s other products out here on the company site.

What I Like: Excellent construction; Wirelessly charges at the maximum speed current phones will allow; Can charge through most standard (i.e., non-rugged) cases; Can work with phones of a variety of sizes; Can charge phones in either orientation; Can use the charging plate on its own when traveling

What Needs Improvement: Available only in black; Needs to be adjusted if changing phones or orientation