It’s getting warm outside which can only mean it’s time to start traveling, and what better way to travel in style than with Away? We received their Aluminum Bigger Carry-On, and it’s a beauty. 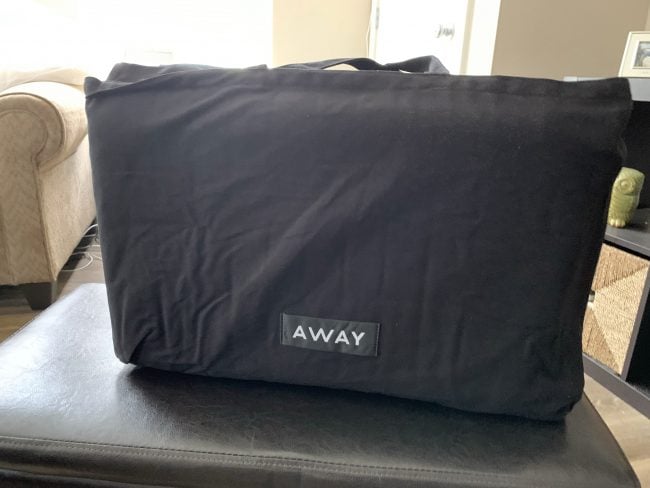 Considered to be an “unbreakable” suitcase, the Bigger Carry-On by Away is a personal favorite for me in terms of traveling in style. I avoid checking a bag for almost every flight, and the Bigger Carry-On is the best possible way of going about it. 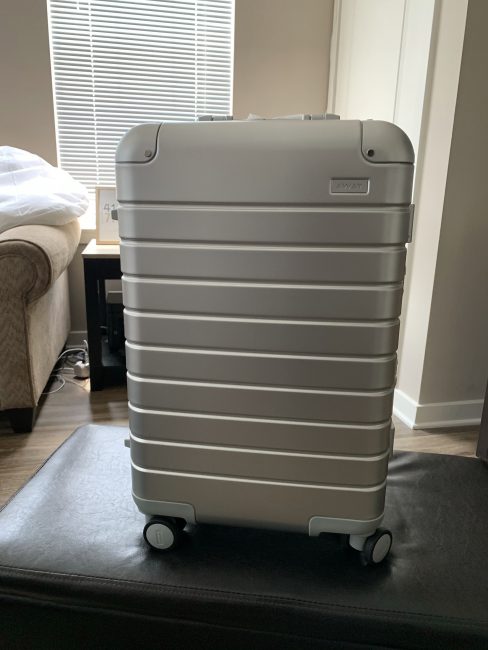 Built with a roomier inside, the one trip that I’ve been on so far this summer (a four-day trip), I was able to pack the essentials with ease. As a frequent over-packer, I find that the Away Bigger Carry-On gives me just enough room to carry what I know I’ll need, and not just everything I can fit. While I still wish the company would’ve included a physical pocket as they did on the previous Carry On that I reviewed last summer, the Away Bigger Carry on is impeccably designed. (On top of that you save an extra few dollars with this model). 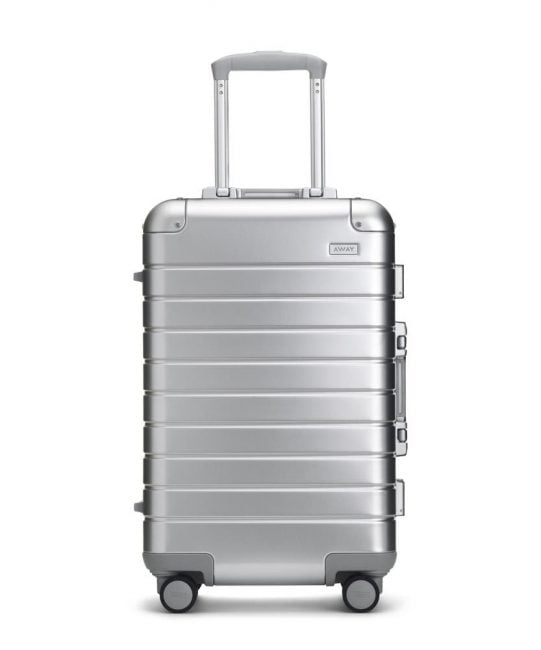 Initially, I was a bit skeptical about the Aluminum look of the suitcase because hard case luggage usually attracts a LOT of unwanted attention by flight attendants and TSA. Luckily though, I didn’t go through much hassle with this one (then again I also flew Southwest, this may vary with a company like Delta or American. For what it’s worth, there have been a lot of bans on smart luggage, mainly because of the internal battery component many of them offer so you can charge your devices not being removable. Luckily though, Away  was a bit smarter about this and their batteries are able to be removed. 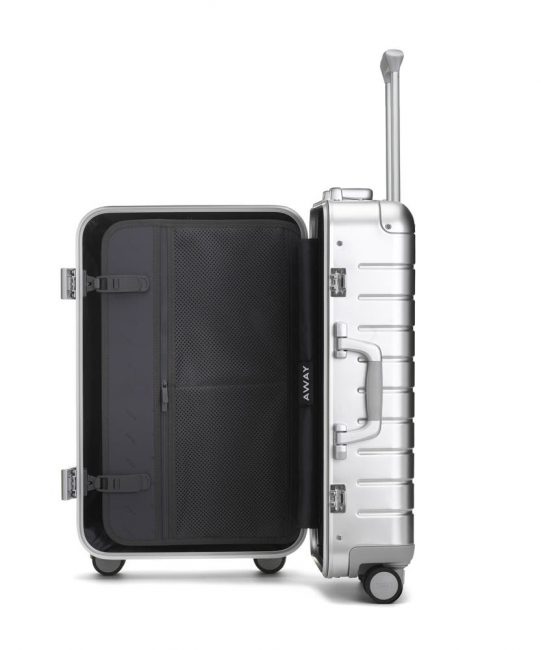 The Bigger Carry-On by Away measures 22.7 x 14.7 x 9.6 inches and weighs roughly 7 pounds which is compliant for many overhead bins. It also comes boasting one of the larger internals, giving you 46 liters of space for all of your socks and jeans. 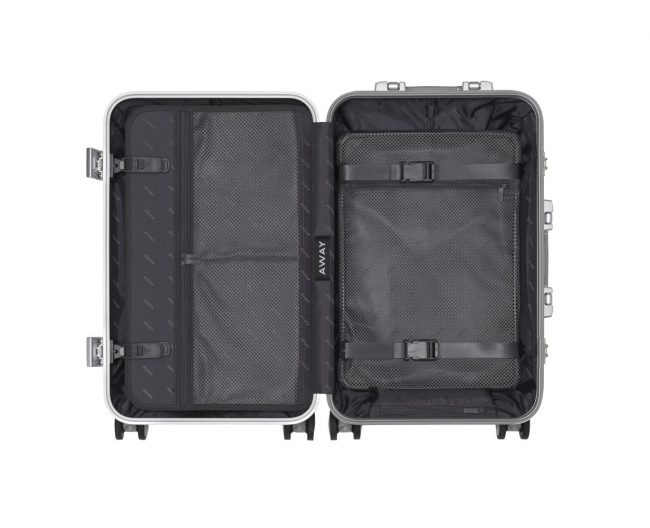 Like many suitcases, the main compartment sits at the right. One thing I’ve always been a bit disturbed with is suitcases (at least hard cases) compromise the inside of the suitcase space by placing the retractable handle at the inside of the bag instead of outside, which causes you to lose space for bigger items like shoes which bothers me a bit, but it’s something I’ve adjusted to by carrying my space running shoes in my backpack and moving my laptop to the Away. Speaking of the handle, it’s made of rubber which is a nice compared to regular plastic handles that get annoying to lug through the terminal. There are also four 360-degree wheels which are a must-have for me because I absolutely refuse to use two-wheeled suitcases these days. 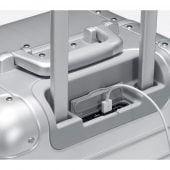 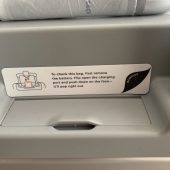 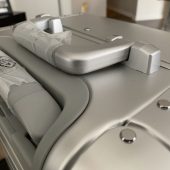 Compared to soft suitcases, I have to say that I still prefer the Away for its portability, simplicity, and honestly, it just looks damn good. The Bigger Carry-On is a bit larger than it’s smaller “Carry-On” brother at 6.2 liters, so you won’t find yourself cramming things into it. And honestly, I MUST prefer the Bigger Carry-on just for this. 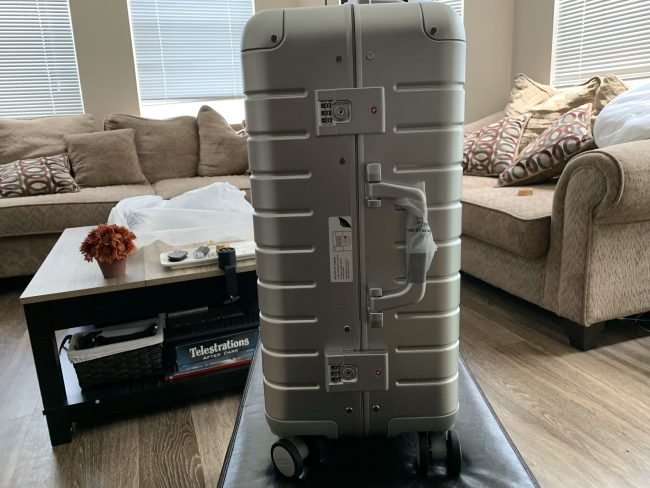 If you’re concerned about security, there’s not ONE, but TWO TSA-Friendly locks that will prevent people opening your checked luggage (which is helpful for me, personally since I carry majority tech in my suitcases now). It’s simply a three-digit combination code, that I obviously haven’t set as my birthday. 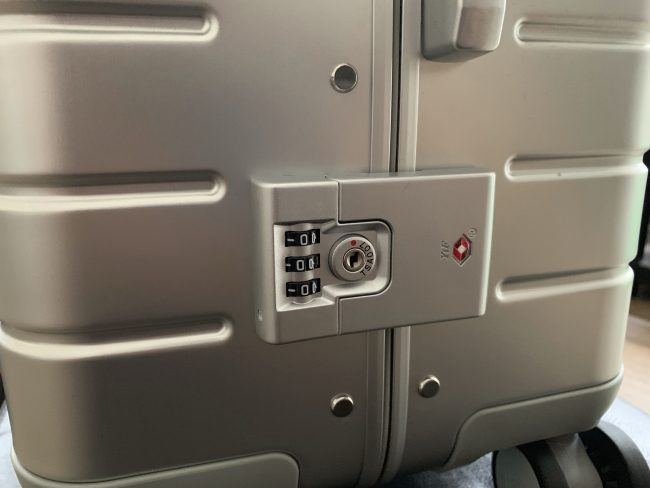 Away luggage also offers an extra layer of security with their Luggage Tag, which helps you track it’s location when it’s up to 100 feet of the device. So in the event someone grabs your suitcase and dashes, you can easily track it. This is an extra cost, of course, luckily for me I already have spare Tiles laying around so I simply toss them in the luggage’s left side which is typically dedicated to dirty/damp clothing. 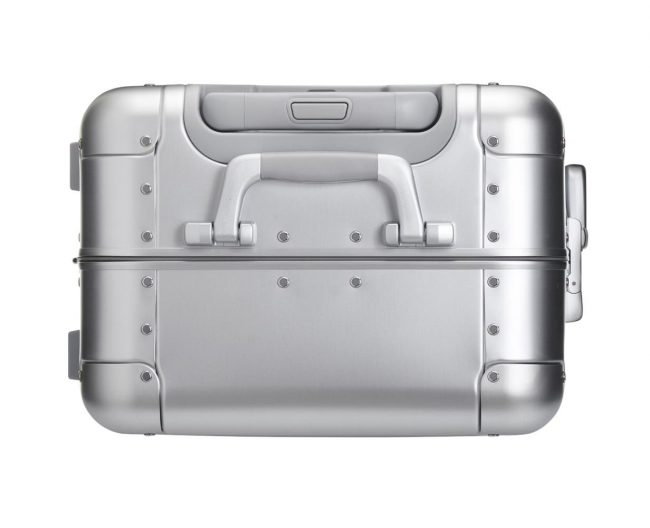 At the end of the day, there’s not much about AWAY luggage that I haven’t already stated. It’s the highest standard of hardshell luggage and will last you years. Even their customer service is superb and will work with you if something ends up happening.

What’s more, Away sent me a very nice backpack that is a companion to the Bigger Carry-On. Complete with a hidden compartment for passports, and enough space to carry your headphones, water bottle and more, the backpack is an extra cost, but it’s simply fantastic. I received the black model of the bag but it’s also available in grey. There’s a nifty RFID pocket for your wallet, a separate compartment for your laptop, and with minimal branding, you’d be surprised that Away made a bag that you can use not just for travel, I typically carry it with me to work.

If you are interested in the Aluminum Bigger Carry-On or the Away Backpack, over to AWAY by clicking this link.

What Needs Improvement: I just wish the Titanium version came complete with a pocket