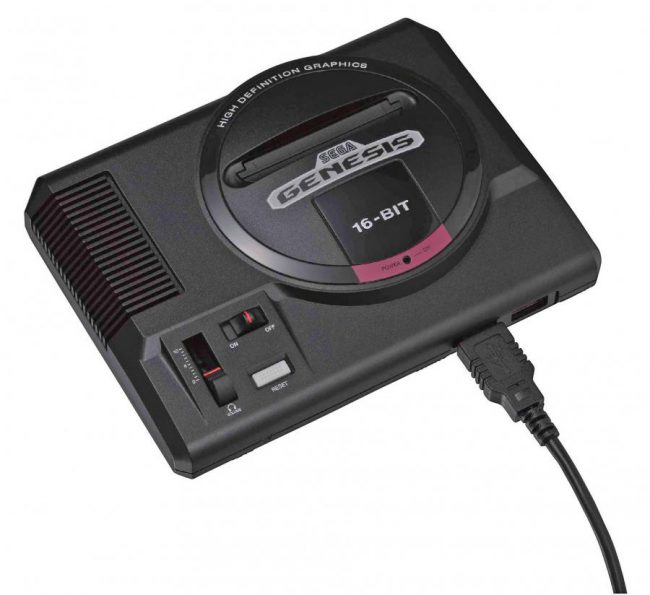 The 1980s & ’90s were an incredible time for video games with huge leaps in graphics and gameplay and controllers starting with the NES and leading into the launches of the PS2 and XBOX. In between we got some of the greatest console and game releases – NES, SNES, Sega Genesis, and Sony Playstation.

Up to this point, we’ve seen three of those released as retro miniatures – scaled-down versions with wired controllers and select games pre-loaded with no ability to add more. The Nintendo NES and SNES Mini versions were well received and sold out throughout the holiday seasons in their year of release. The Sony Playstation Mini was critically trashed, sold poorly, and within six months of release had the price drop as low as $20 (it originally retailed for $99!). Fortunately it looks like the Sega Genesis Mini is set to resemble Nintendo’s rather than Sony’s!

The Genesis followed Nintendo’s lead of offering first-party games to attract new users. In this case the key property was Sonic the Hedgehog, in a game that was a great showpiece for the innovative graphics technology and just a blast to play. The Genesis Mini will feature Sonic (of course), but it will also include 41 other games — more than double what the other retro-consoles have offered!

The Genesis Mini includes two three-button controllers which use USB connections to the console, meaning that the original system controllers won’t work. You also get an HDMI cable and a USB power adapter (other systems required you to have your own). There are different graphics modes available to adjust from the original 4:3 output to current 16:9 standards or other modes as you prefer. The versions of each game are either the best version or in some cases you get to pick which one to play. And best of all, the Sega Genesis Mini will release on Sept. 19 for $79.99.

Here are the games – and since the games were adapted by Sega, who are also doing the hardware, we should be in for excellent quality:

Pre-orders are now available at most game retail locations, here is a link to Amazon.

So – are you interested, skeptical, or have you had just  of thabout enoughe retro-mini-console trend?