Until folding phones manufacturers are able to sort out all their devices’ inherent issues, we can look to LG and their Dual Screen solution which we first saw on the V50 ThinQ at MWC. That Dual Screen case option wasn’t available in the US, however. Now we have the LG G8X ThinQ, and yes — it’s coming to the US! 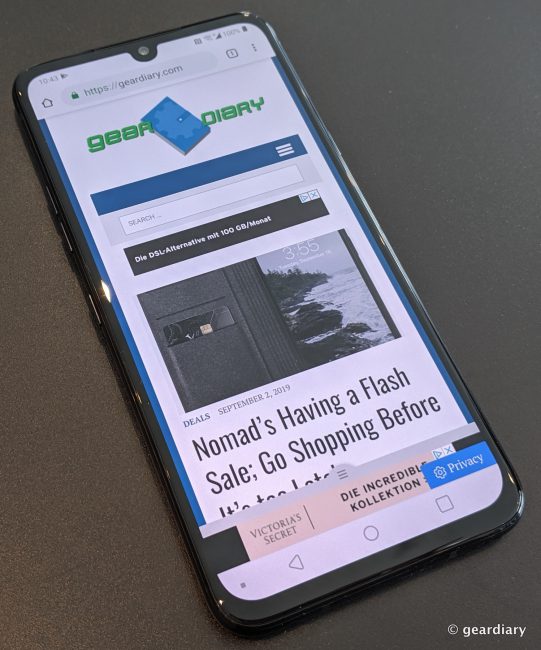 The idea of a phone that opens up and becomes more isn’t new, but figuring out the best way to accomplish that “more” without sacrificing build quality is proving to be a challenge for at least two huge phone makers. In the meantime, LG has come up with a solution that allows you freedom of choice. You can opt to either carry the sleek GX8 ThinQ on its own … or, when you want to have the convenience of two screens, you can pop it into the DualScreen case for extra usability! 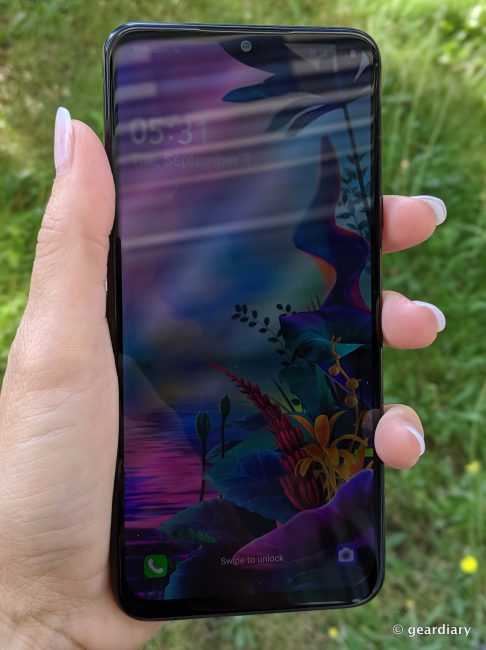 The LG G8X ThinQ will have a 6.4″ OLED FHD+ screen. It’s running the top of the line Qualcomm Snapdragon 855 mobile platform, and it comes with 6GB RAM and 128GB storage. Best of all, it has a microSD slot for those who need more memory. The GX8 ThinQ measures 15.9cm tall by 7.6cm wide by .84cm thick, and it weighs 192 grams. Its got two cameras on the back: a 12megapixel standard camera with optical image stabilization and the second is a 13-megapixel super wide-angle camera. On the front, there is a 32-megapixel standard angle camera. 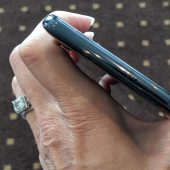 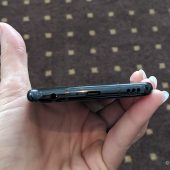 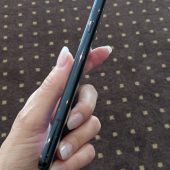 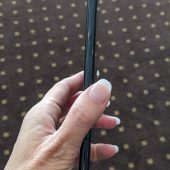 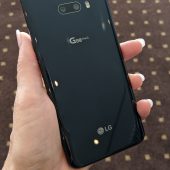 The LG GX8 ThinQ has a massive 4,000mAh battery, and it is Fast Charging 4.0 compatible, and it has wireless charging, too. Even though the phone is a shiny fingerprint magnet in glossy black, it’s surprisingly durable; it has Gorilla Glass 6 on the front and Gorilla Glass 5 on the back, an IP68 dust and water-proofing rating, and it passed MIL-STD-810G testing. So maybe you won’t destroy it if you drop it without a case … maybe. I probably would. But anyway!

You can take that svelte little powerhouse and slip it into the LG DualScreen case, and turn it into a dual screen phone! 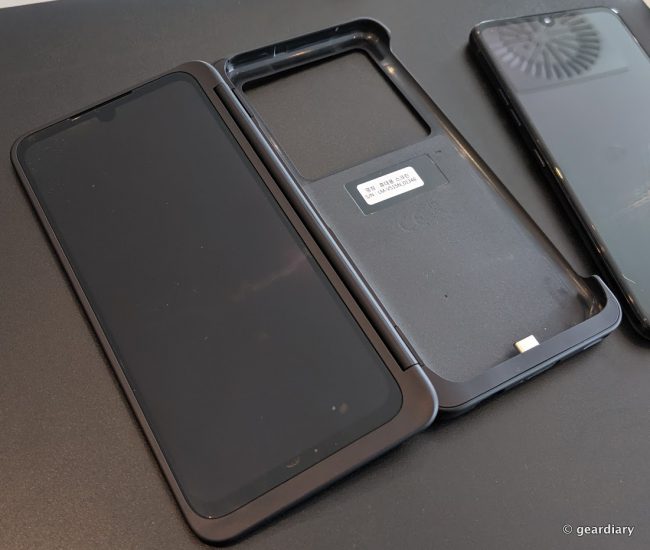 One thing I’m not thrilled with: LG used a drop-in USB-C connector on the GX8 ThinQ versus the POGO pins they used connecting the V50 ThinQs with its DualScreen case. This method may have benefits I’m not aware of, but it seems like a step back.

When you drop the GX8 ThinQ into the DualScreen case, you get two 6.4″ OLED FHD+ screens to work with! 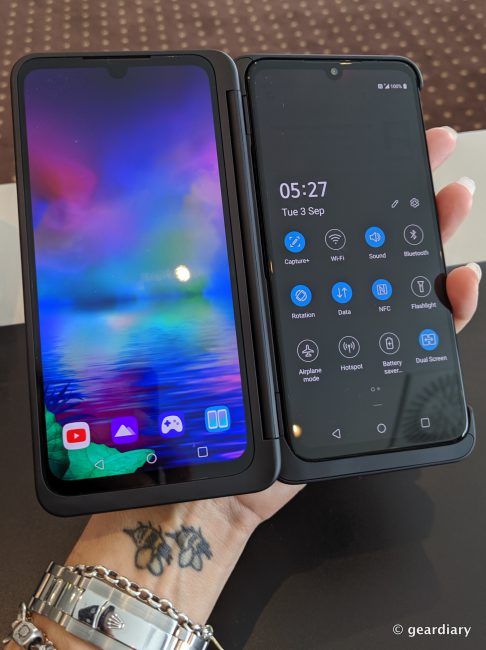 The DualScreen’s display is Gorilla Glass 3.

The font cover of the DualCase is shiny enough to use as a mirror; I’m not a huge fan of that, as it will be a dust and fingerprint magnet, but okay. I really like the texturized back on the DualScreen, though. 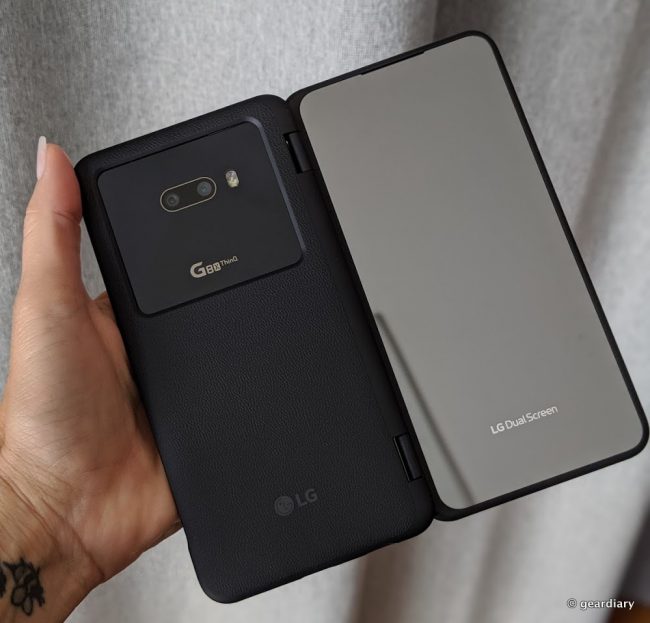 There’s no fingerprint reader on the back because it is now in-screen on the main display.

I’m including some pics of the LG V50 ThinQ that I brought with me to IFA to show that the differences with their respective DualScreen cases. 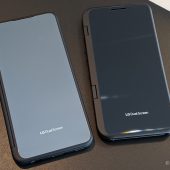 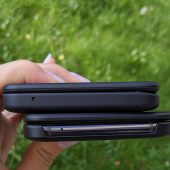 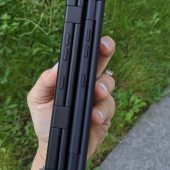 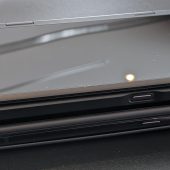 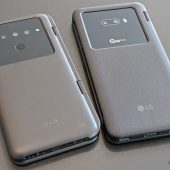 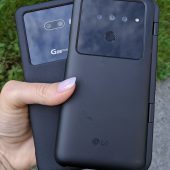 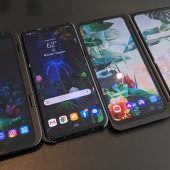 There are two noticeable improvements on the new DualScreen case. The first is that there is now a 2.1″ cover display that shows the usual information you’d have to tap your phone’s screen to get. This way, you don’t have to go to the bother of opening the G8X ThinQ and DualCase like a book for a simple time check. The second major improvement is the freestop hinge on the newer DualScreen case that allows you to open it and hold the position from 0-360º rather than the few dedicated stops on the V50 ThinQ’s DualScreen case. 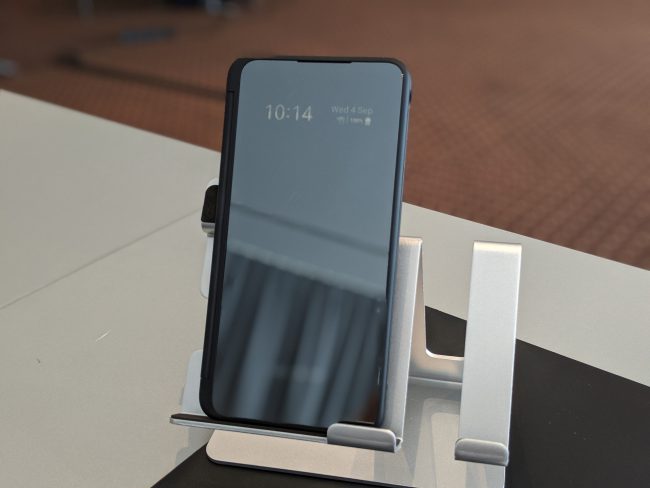 Why would you even want a dual-screen phone? Well, how often do you find yourself switching between apps to get a task accomplished? Imagine being able to have both apps at the same time. Or maybe you’d like to have your email open on one screen with the files you’re referencing open in the second. Or how about having a video call going on one screen with your browser open in the second? Or you can use the Whale Browser, which has been optimized to stretch a web page between the two screens, like this … 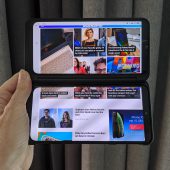 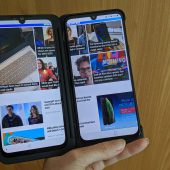 Gaming is, of course, another excellent application for the dual screens, as you can have the controller on the bottom screen with the game running on the top. You can even customize the gamepad controls to your liking on certain games. 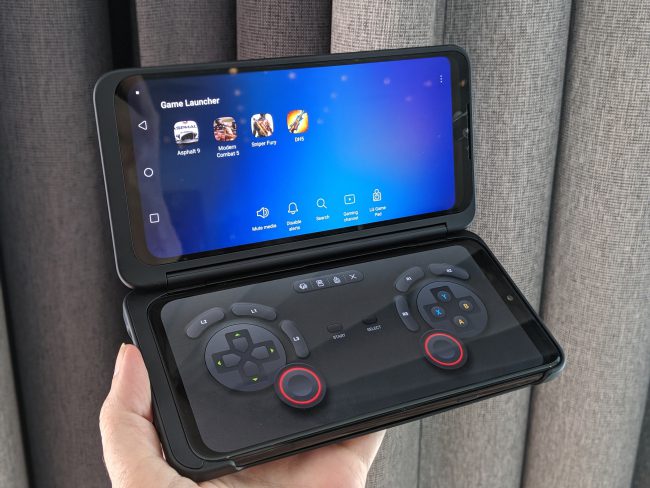 Whatever way you choose to use the second screen, having the option to use it in the first place is pretty sweet. We don’t have availability dates for the G8X ThinQ or its DualScreen case yet, not do we have prices. I’ll update once we do. In the meantime, you can learn more at LG’s site.