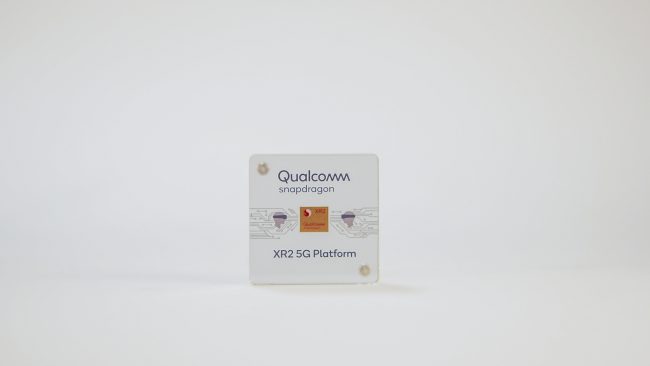 The Qualcomm Snapdragon XR2 Platform is a premium-quality platform packed with custom features and multiple firsts. It sets the stage for the next generation of augmented reality (AR), virtual reality (VR) and mixed reality (MR), and we expect to see products employing this platform in the not-so-distant future. This announcement means the underlying technology has finally matured to the point where many of the AR, VR and MR concepts that have been floating around for years are finally possible

Chief among the features of this new platform is a marked improvement in performance that can deliver twice the CPU and GPU performance, four times more video bandwidth, six times the resolution and eleven times AI improvement than possible until now. The Snapdragon XR2 Platform is also the very first XR platform that is able to support seven concurrent cameras and a dedicated computer vision processor.

But there’s more. The new platform is the first to enable low latency camera pass-through. That’s important because it allows for “true MR.” MR is the middle ground between VR and the real world in which users are able to see, interact and create a hybridization of the virtual and real-world while wearing a VR device. In other words, MR means it no longer needs to be either VR or “reality” but a mix of the two in order to create something entirely new.

Visuals: In order to experience a heightened sense of realism in XR, it is imperative to close the visual gap between the real and virtual world. This requires cutting-edge display and graphics. The Snapdragon XR2 Platform takes a leap in core GPU processing by supporting 1.5x the pixel rate and 3x the texel rate for efficient, high graphics rendering1. XR specific features like foveated rendering with eye tracking and enhanced variable rate shading for smoother refresh rates help render heavy workloads, while maintaining low power consumption. The Snapdragon XR2 display panel offers up to 3K by 3K resolution per eye at 90 frames per second (fps) and is the first XR platform to support 8K 360ovideos at 60 fps for photorealistic visuals in streaming and local playback. Custom silicon was developed for unique AR displays to help reduce overall system latencies to maintain immersive AR experiences.

Interactivity: With XR, for the first time a user can be virtually teleported to a new environment. To do this accurately and efficiently, the Snapdragon XR2 introduces support for seven concurrent cameras and a custom computer vision processor. Multiple concurrent cameras enable real-time and highly accurate tracking of the head, lips and eyes together with 26-point skeletal hand tracking. Computer vision provides highly efficient scene understanding and 3D reconstruction. Together, these features allow users to be transported to new environments where they can intuitively interact within a digital world.

Audio: In an augmented or virtual world, sound is the key to every immersive encounter. The Snapdragon XR2 Platform offers next-level audio layers in a rich, 3D spatial sound while providing crystal-clear voice interactions to deepen immersion. The platform has a custom built always-on, low power Qualcomm Hexagon™ DSP to support hardware accelerated features like voice activation and context detection to help keep users’ head in the digital world, while having an ear in the real world.

AI & 5G: Two technologies shaping the future of communications and computing are AI and 5G. Qualcomm Technologies is leading the way in driving these technologies across mobile computing, including XR. Multiple Snapdragon XR2 features have been improved using AI, including visuals, interactivity and audio in order to immerse users in a smarter reality. The Snapdragon XR2 Platform is the world’s first XR platform to support 5G connectivity, which has the potential to unleash a tidal wave of innovative XR experiences that require low latency and ultra-fast data speeds. For example, 5G enables truly boundless XR using split processing between a device and edge cloud to present photorealistic and high-quality experiences without cords or being confined to any room.

The Snapdragon XR2 Platform will play a key role in the next generation of digital and make exciting new products possible. And while this might sound theoretical, setting the stage for something we might see years from now, that’s not the case at all. In fact, Qualcomm already has multiple OEMs committed to bringing commercial products that leverage the Snapdragon XR2 Platform to market. Moreover, according to Qualcomm, other customers are already in various stages of prototyping and evaluating products we will likely see in the market in the not-too-distant future. It’s an exciting time in the world of VR and mobile computing and these last three days with Qualcomm are just a taste of what’s to come.

You can learn more here.

Here are some highlights from the press conference …

. @Qualcomm @HugoSwart_QCOM belives that XR has the potential to be one of the most disruptive technologies in the world and is powering over 30 XR devices. #SnapdragonSummit pic.twitter.com/88srLgwAys

XR is the key theme of Day 3 at the #snapdragonsummit Qualcomm have been investing in the technology for over a decade, with Snapdragon powering an impressive range of devices pic.twitter.com/9ian660pEr

Qualcomm envisions XR “anyway you want it” with standalone options, viewers linked to 5G phones and “boundless xr” that wirelessly connects to a PC or through 5G #SnapdragonSummit pic.twitter.com/Nm3Z0Nnxxz

Yes, @qualcomm helped create standalone #XR, XR viewers, and boundless XR. There’s more variety in the space than you might realize. Lots of hybrid solutions out there.
This is probably heading towards a 5G, low latency discussion. #SnapdragonSummit pic.twitter.com/vsovKk1O5h

Ever wondered about which companies were working with Qualcomm to expand XR and they way that we as consumers interact with the world around us? Here you go .. #SnapdragonSummit pic.twitter.com/EpG7TEUxtQ

Very interesting slide this… how computer-human interaction has changed over a period of time… #snapdragonSummit pic.twitter.com/1FXOsz3Gz6

A car is no longer a car, it’s a computer on wheels. It already has 60-100 sensors, and that’s going to double in the next few years. #SnapdragonSummit pic.twitter.com/4FcPMN1cTK

And now Raffaella Camera from @Accenture is on stage to discuss how #XR is helping businesses from @KLM to @KelloggsUS. #SnapdragonSummit ? #Pixel4XL #telephoto pic.twitter.com/CJqJ1i9YhZ

In Japan they’re going to have lightweight AR glasses tethered to 5G smartphones. Already demoing them in a store in Tokyo. Launching in 2020. #snapdragonsummit pic.twitter.com/6OzTcbhBBv

Deutsche Telekom now on stage talking up how AR can be used for field repairs. #SnapdragonSummit pic.twitter.com/LidO8qAGYZ

This is the world’s first 5G XR platform taking immersion and connectivity to the next level. Are you ready for XR in every step of your daily life? It’s coming! #SnapdragonSummit pic.twitter.com/BzpWv1HKad

The @Qualcomm Snapdragon XR2 is the 1st 5G XR Platform. Up to 3K x 3K resolution per eye at 90 FPS. This is the first XR platform to support 8K 360 degree videos at 60 FPS for photorealistic visuals in streaming & local playback. #SnapdragonSummit pic.twitter.com/djp2UEvWR7

At #SnapdragonSummit, @Qualcomm’s Hiren Bhinde and Hugo Swart discuss how XR2 will sit above the XR1 as a premium experience option, with new features devoted to AR and VR devices’ special needs. Consumers want something they can wear in daily lives. pic.twitter.com/1rb6ARqJYz

#Qualcomm‘s #Snapdragon XR2 Platform is a serious upgrade over the XR1… in terms of performance as well video. #SnapdragonSummit pic.twitter.com/HOOaKl5f2U

Thank you to @PennyRBaldwin for hosting tonite’s #Womenintech cocktail hour and for the motivational advice: share the good, inspire, support one another! – it start with us! #diversity and #inclusion #SnapdragonSummit pic.twitter.com/ALCLjDO0aO

And now they’re in #VR, as you can see they seamlessly switched between #AR, #MR and #VR with @SpatialXR running in an #XR2 prototype headset. #SnapdragonSummit pic.twitter.com/wRSqwnhPQn