Posted By: Perry Brauner May 1, 2020
ShareTweet

The SmokeFire is Weber’s first foray into the pellet grill space, and while it checks a lot of boxes, it has its quirks. The Weber SmokeFire is a good option if you’re looking for a grill that will allow you to both smoke at low temperatures and grill with high heat. Coming in two sizes, the SmokeFire starts at $999. 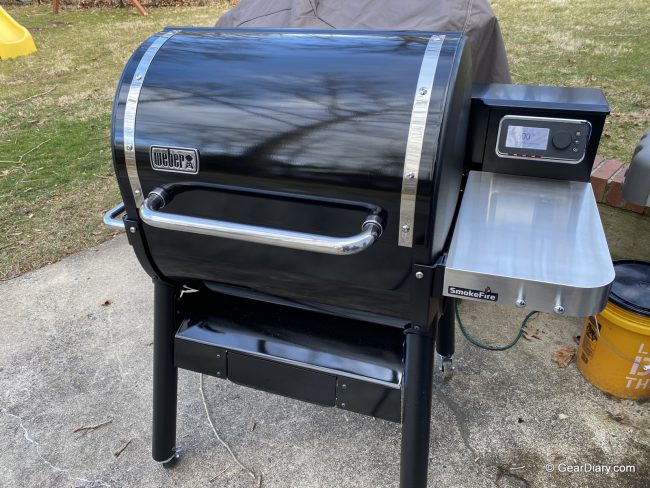 Check out my preview video, where I go over the design and features of the grill prior to cooking on it:

Both models have a built-in shelf with utility hooks on the right side as well as the controller.  The controller features a large, backlit LCD screen that’s easy to read in daytime as well as night.  You adjust settings using a rotating knob that pushes in for confirmation.  It’s very easy to use, unless its cold outside.  When the temperature is cold, the liquid crystals seem slow to respond and you need to turn the dial slowly in order to change the temperature.  The controller has four probe ports while the SmokeFire only comes with a single temperature probe.

There is a grease & ash pullout tray underneath the cooking chamber that works fairly well and is much easier than vacuuming the fire pot out manually, but more on that later.  The SmokeFire is perched on four casters, two of which lock.  While the casters are fairly small, I’ve found that doesn’t make much difference unless you’re moving it around all the time.  On the rear, you’ll find the long and narrow pellet hopper that holds around 22 pounds of pellets.  That said, the pellet hopper is a little too narrow and I find that it’s difficult to keep pellets from falling on the ground during refill.  Also, once the pellet hopper insert is installed (discussed later) the capacity gets down closer to 20 pounds.

Assembly of the Weber SmokeFire was really easy, especially when using the BILT App, which is a mobile phone application that takes you through the installation instructions step-by-step, using three dimensional diagrams that you can rotate and zoom into.  Assembly took about 45 minutes with two people, but it can mostly be done by one person as long as you get some help with the heavy lifting. 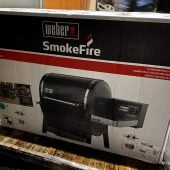 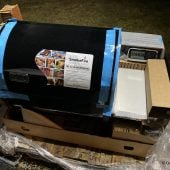 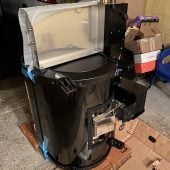 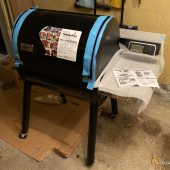 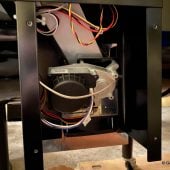 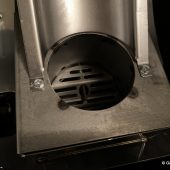 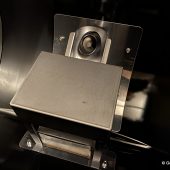 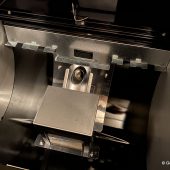 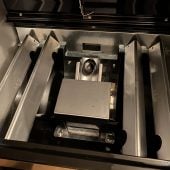 A close look at the interior of the grill. You can see the inverted auger, pellet slide, main diffuser, and flavorizer bars before the large central flavorizer bar is installed. 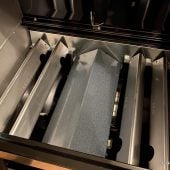 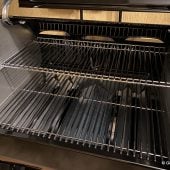 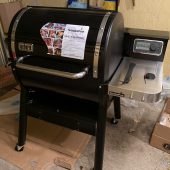 Check out my full review video, where I talk about all of the cooks I’ve done on the Weber SmokeFire and talk about whether or not I recommend it:

I did a number of cooks on the SmokeFire, from low and slow smoking to high heat grilling.  The one thing I will say for sure about this pellet grill is that it can really grill.  Unlike most pellet grills that require accessories (which of course are sold separately) in order to sear a steak, the Weber SmokeFire can be set to 600 degrees Fahrenheit, reaches the target temperature in about 10-15 minutes and does a great job cooking burgers, chicken breast, steak, and anything else you’d grill at high temperatures. 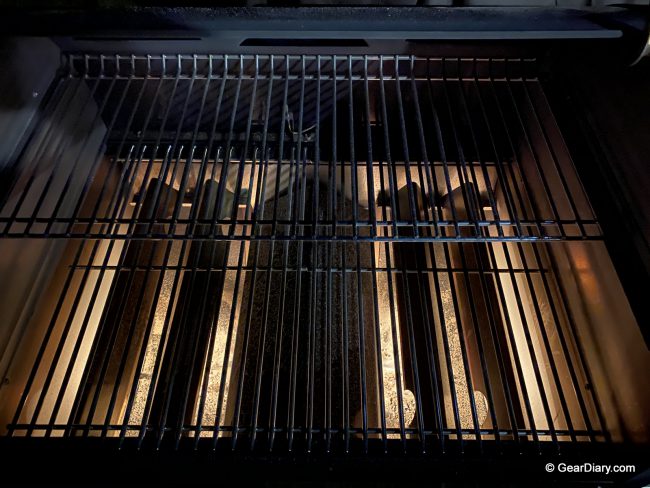 A look at the SmokeFire heating up to 600F 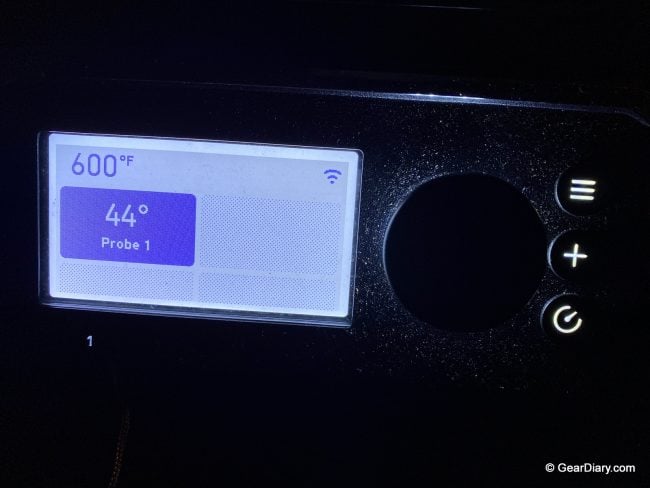 While it does have some flaws, you can tell that Weber did a ton of research on the pellet grills on the market and tried to improve upon some of the common user complaints.  Some of the issues they tried to solve include: 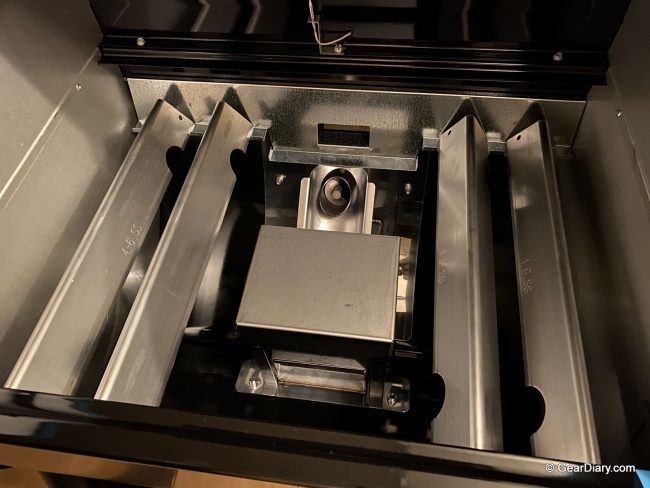 A close look at the interior of the grill. You can see the inverted auger, pellet slide, main diffuser, and flavorizer bars before the large central flavorizer bar is installed.

As I mentioned, I did a number of cooks on the SmokeFire.  I was most excited to check out the high heat grilling, but I would have been remiss if I didn’t also test out the low and slow smoking performance.

I made a number of quick weeknight meals on my SmokeFire, including 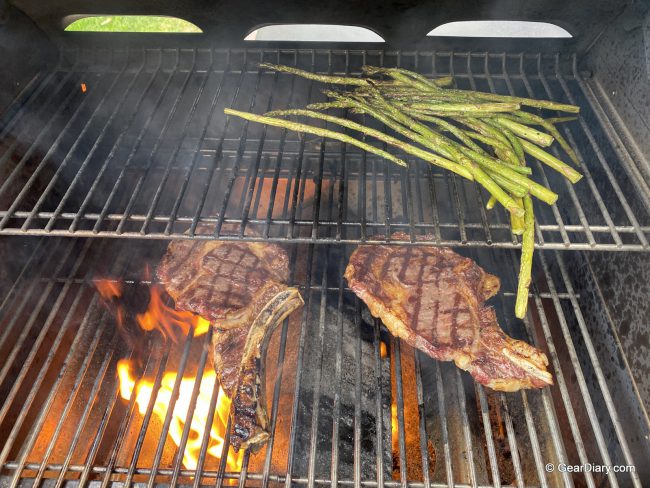 Ribeyes on the SmokeFire set to 600F 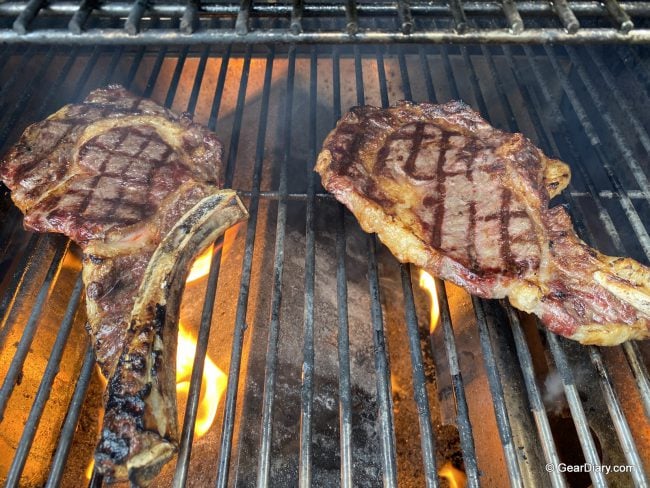 Nice grillmarks on the steaks 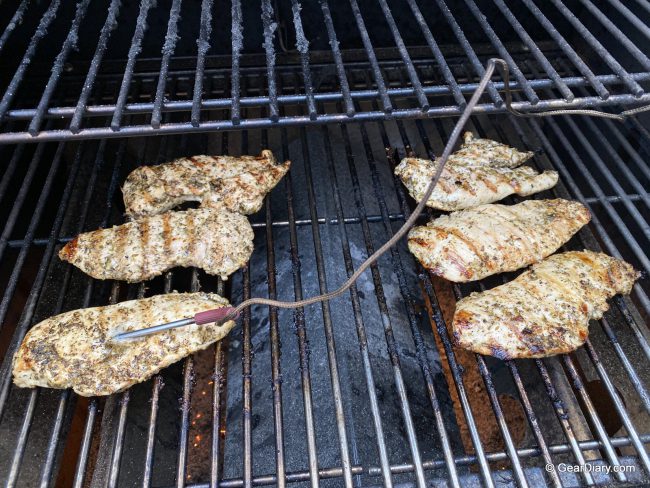 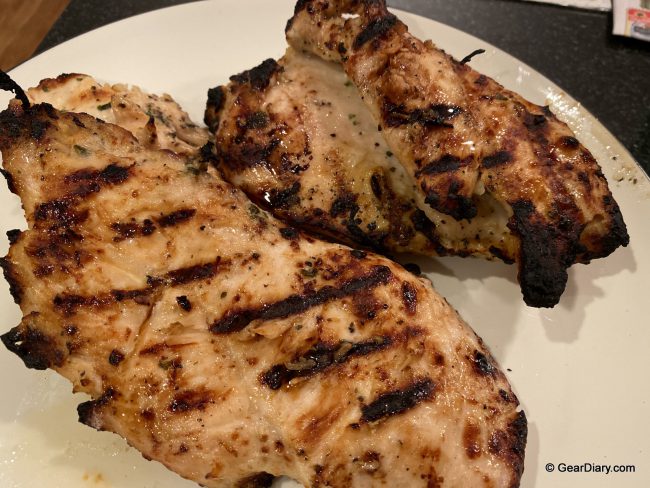 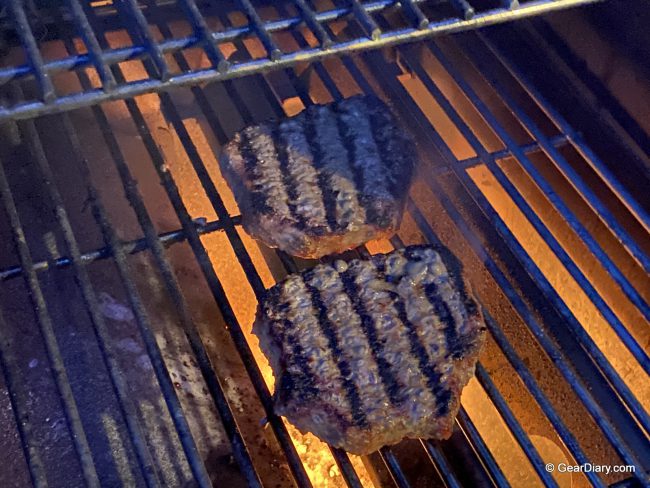 For my low and slow test, I smoked a corned beef, otherwise known as a Pastrami.  I placed the corned beef on the top shelf with a water pan directly underneath.  The SmokeFire imparted a great smoke flavor and held well at 225 while it still had pellets in the auger.  I say that because I ran into pellet tunneling issues a bunch of times during this approximately 6-hour cook.  Pellet tunneling occurs when there isn’t enough slope for the pellets to fall down to the auger, and while this happens from time to time on most pellet grills, the issue is more exaggerated on the SmokeFire than any of the other pellet grills I’ve tested.  Weber tried fixing this by shipping a pellet hopper insert, which increases the slope of the hopper while reducing the hopper capacity from 22 lbs to about 20 lbs, but for some reason, this still did not fix the issue.  For a pellet grill, where the major selling point is that you can “set it and forget it,” the fact that I can’t trust the SmokeFire to do an overnight smoke is a significant fault and may be the most frustrating downfall of the grill. 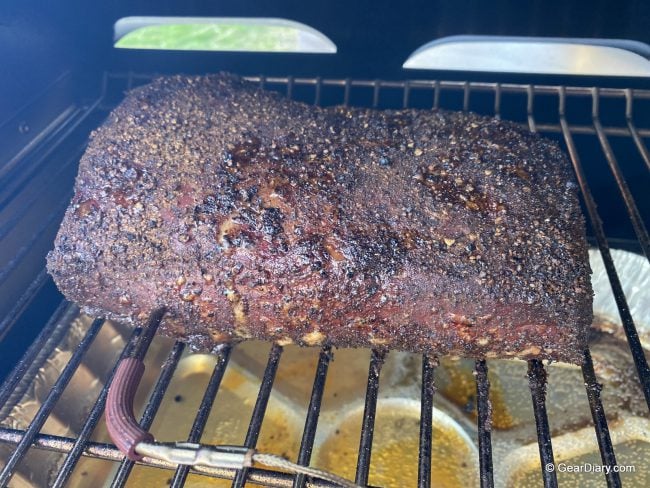 Smoking pastrami on the SmokeFire 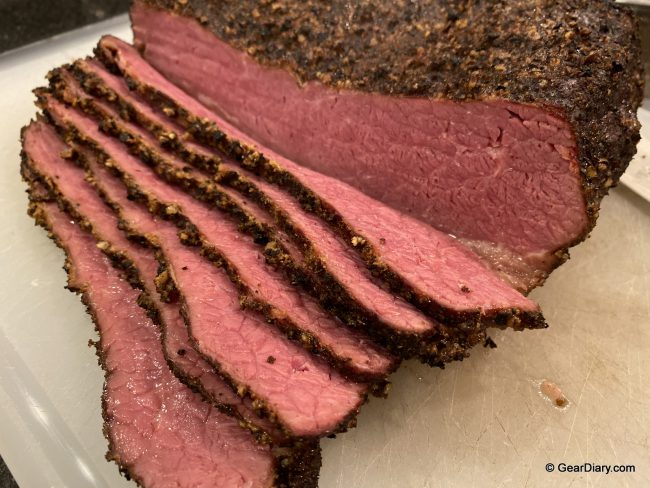 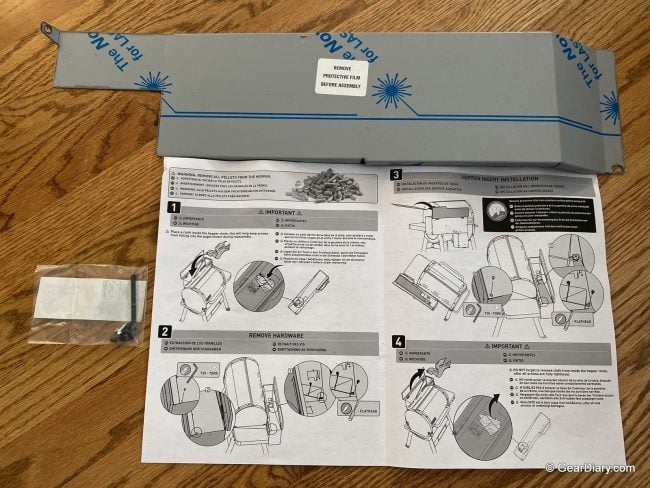 The pellet hopper insert prior to installation 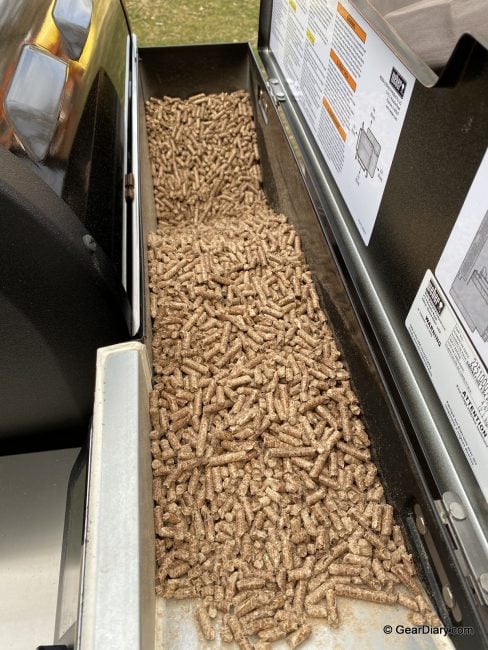 The beginnings of pellet tunneling. You can see a pile of pellets not sliding down the hopper.

While we’re talking about downsides, let’s talk about some of the other faults of the SmokeFire after having tested it thoroughly. 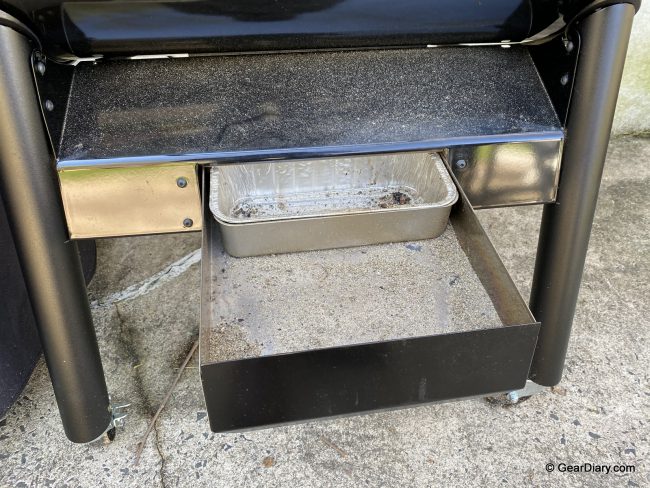 A look inside the ash/grease tray. 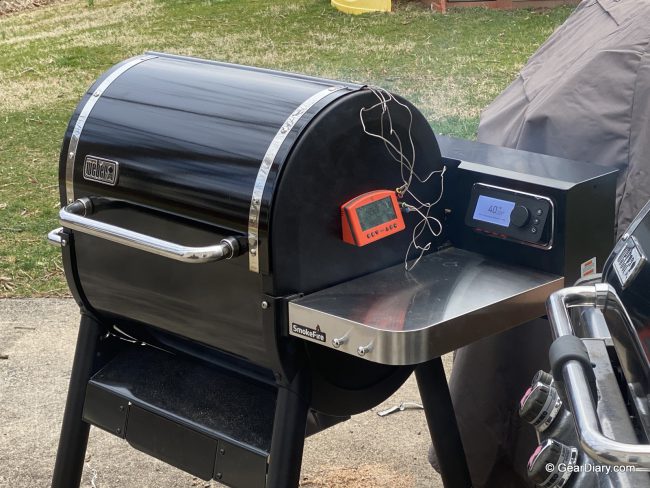 A look at how I tested temperature throughout the chamber. I used Thermoworks Signals to measure the air temperature at different parts.

In conclusion, my testing has confirmed that Weber’s SmokeFire achieved most of what it set out to do; build a pellet grill that can smoke low and slow for weekend projects and sear with high heat to act as a gas grill for quick and easy weeknight meals.  While it can certainly do both, the SmokeFire has some quirks that make it difficult for me to recommend it to friends at this time; mainly the fact that I can’t leave it on its own for a long low & slow smoke, and the uneven heating throughout the chamber at both low and high temps.  I am confident that Weber will iron out these quirks, which is why I would recommend waiting until the next iteration of the SmokeFire.  I’ve used Weber products for years and can attest to their high quality and excellent customer service, so I have no doubt the SmokeFire will get some great improvements sooner than later.

You can purchase your Weber SmokeFire directly from Weber by going to WeberGrills.com or calling your local dealer.

What I Like:   The ability to both grill/sear and smoke is a game-changer; The screen is easy to read day or night; Quality construction; Easy to assemble; Auger design helps prevent burnbacks; WiFi-connected; Makes delicious food

What Needs Improvement:  Pellet hopper can’t be trusted delivering pellets to the auger, so I wouldn’t leave it for an overnight smoke; Uneven temperatures throughout the cooking chamber; App needs more features