When we reviewed the Roku Ultra and Roku Streambar, we highlighted how Roku is the best choice if you’re not tied to one particular streaming service. That value proposition has only increased now that Roku has added Airplay and HomeKit support to many of their 4K devices! 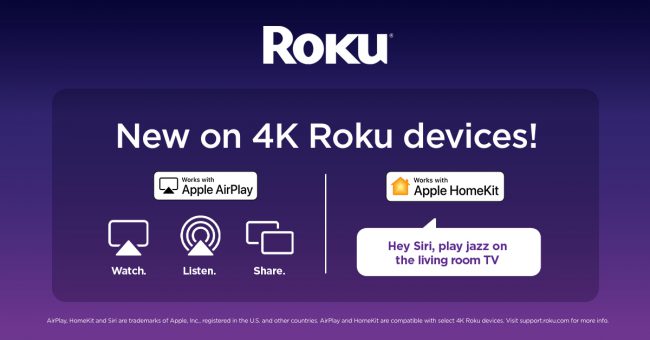 I’m not a heavy user of Siri except to remind me of tasks, so I haven’t done much with HomeKit yet. Still, the Airplay feature is very, very cool because it effectively removes the final issue with any streaming box. As fans of HBO Max and Peacock might have noticed (I’m assuming someone, somewhere, is an NBC fanboy), both services have been slow to show up on Roku and Fire TV. As of the time of this writing, HBO Max is only on Fire TV, but Peacock is only on Roku. Airplay neatly sidesteps that entire issue by allowing you to stream any app and service to your Roku device. Now you don’t need a dedicated HBO Max app to watch HBO! Or you can stream photos, videos, whatever you want with ease.

It’s a minor update in the laundry list of things that Roku can do, but it’s one of those things that adds significant value! If you have a 4K Roku device, this feature is rolling out now, so you either have it or will have it soon!