Back in the late 80s, when every spare dime I had went into car stereo components, I bought my first KICKER product. It was a subwoofer speaker box which fit perfectly into the space behind the seats in my silver Alfa Romeo. Never mind that it took up valuable cargo space; I still had a trunk, and I got a free back-massage every time I turned on my stereo. When I sold that car, I was able to unplug a few wires and easily remove my rear speaker system; that box was eventually transferred into several more vehicles before I ultimately gave it away. By that time Sarah had been born, and having a thumpin‘ car stereo just didn’t seem like a priority anymore; but I digress.

When I was offered the chance to review the new KICKER iKICK iK500, my first thought was one of happy nostalgia. But make no mistake about it, this KICKER box is not a car stereo component, it is for use inside the home. There are versions available for both the iPod and Zune, designated by either an “i” or a “z” before the 500. According to the KICKER site, the iKick model was “designed to be the loudest digital portable system available.”

Loud is good, but if the sound is muddy and the music sounds like crap, then the speaker system might as well be quiet. Read on to see how the iK500 fared… 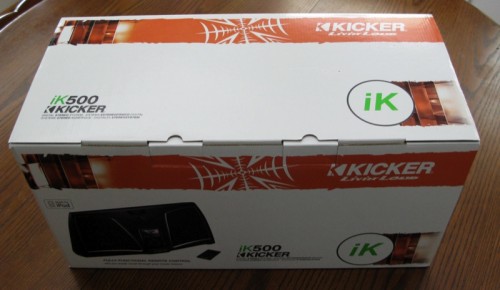 Worth noting is that the speaker box was very well packed. Joel recently reviewed a speaker system that arrived cracked and damaged… …that was certainly not the case, here. Included in the box are the iK500, eight removable docks sized to fit various iPod models, a power-brick and cable, a remote control, and a user manual. Once it was unwrapped, I found the iK500 to be larger than I expected. I have reviewed other speaker systems for the Zune and iPod in the past, but I believe that this one is easily the biggest, measuring approximately 20″ long x 9″ tall x 8″ deep at its largest points; it weighs almost 10 pounds. On each side of the box is a 5″ woofer as well as a 0.75″ tweeter; the iPod dock sits inside a 3″ wide x 1″ deep well in the box’s center.

At the top’s center is a 2.25″ wide LCD display, sitting directly above a lighted rotary control which not only powers the system on or off, it also controls the volume, the bass setting, and the treble setting. The display will indicate whether there is an auxiliary device plugged into the jack on the rear, and the display will also indicate whether or not the iK500 is in Standby mode. Standby mode is basically when the iK500 is powered down, but the iPod is still charging. The black plastic box’s design is masculine and slightly menacing, when the iK500 is powered down, the black on black is interrupted only by the matte silver bordering each speaker’s mesh and the matte silver KICKER logo on the bottom. The iK500’s iPod well is designed to accept one of the eight included dock adapters; the protruding round object above the well is the vibration isolation pad which will keep larger iPods from jerking around when the box starts thumping. The included dock adapters are for the following iPod devices:

As you may have noticed, there are no cradles included for the 3G nano or the touch, yet I found both fit directly on the plug with no problem. The 3G nano is so small and slim that the vibration isolation pad isn’t exactly necessary. The pad does work well with the iPod touch, however. The iPhone will also fit into the holster in this manner, but since this speaker system is not specifically designed for it, the iPhone must go into airplane mode in order to play.

Turning the iK500 around reveals the transport handle on the top, with the 6″ wide x 6″ tall reflex subwoofer’s “square passive radiator” directly below. The two 1″ wide bars cross the square passive radiator to make sure that nothing leans against this veritable trampoline. You’ll see what I mean when you watch the upcoming video. …and on the right there is a DC power jack as well as a 1/8″ stereo auxiliary input jack. This auxiliary jack allows you to “connect additional media to the stereo system, including other MP3 and compact-disc players, as well as desktop and laptop computers, or satellite radio.” All that’s left is to tell you how the iK500 sounds, and I must say that it is impressive. As expected of any device with the KICKER name, and with such an obvious subwoofer, the thump is loud and I think this video pretty much shows what it can do. Bear in mind that the volume can be turned all the way up to 40, and it is only on 24 in the video, and realize that there are four skid-resistant feet on the box’s bottom…

But of course, “thump” is not the only criteria when judging a music system, and I was pleased to find that the iK500 managed to play songs equally well from Jack Johnson, Snow Patrol, Korn, Maroon 5, Keane, the Bravery, Kasabian, Jason Mraz, Muse, and Fiona Apple; each played back with perfect clarity and depth, without the sensation of sitting in a car stereo competition watching the rearview mirror vibrate off the glass.

I’ve had the sound system sitting on my desk for the past few weeks, and although I have seldom “needed” to move the volume above 7, I like the idea that if I wanted to rattle the glass in my office (literally), all I would have to do is just turn that knob a bit. If you have been looking for a self-contained iPod or Zune sound system that can charm you by its excellent sound and blow your socks off with its punching bass, then this is the one to get. I wish my current Alfa’s car stereo sounded as good. 😉

The KICKER iKICK iK500 is available from the manufacturer as well as other retailers.There is also an iKICK ZK500 available for Zunes.
MSRP: $349.99, currently offered at the special introductory price of $299.99
What I Like: Amazing sound, including room-thumping bass; ability to control all iPod functions with the remote; cradles included to fit almost all available iPod models
What Needs Improvement: Holsters for current 3G nano and iPod Touch should probably be included; iPhone compatibility (without going into airplane mode) would be a huge bonus