So you got yourself a shiny new iPad 2. (Finally!) How are you going to protect it? Think about it: you want a case that protects the iPad as much as possible but you also do not want to lose the nice curves and the thinner design it offers over its predecessor. Speck has started rolling out their offerings and we are going to take a look at a few of them. First up is the Speck PixelSkin HD Wrap case for iPad 2. The PixelSkin HD Wrap case for iPad 2 builds on the company’s familiar Pixel Hd design and will completely encase the iPad in a thin but effective layer of protection while still allowing full access to the screen, buttons and ports. Inspired by our CandyShell Wrap for original iPad, our PixelSkin HD Wrap case for iPad® 2 gives you a superbly slim fit to go along with a perfectly pixelated, high-contrast glossy-matte finish. When you close the cover, microsuction makes sure it stays in firmly place. Open it up and this super-rad iPad 2 cover folds back into a viewing and typing stand with multiple angles. Protective and slim-fitting with a stylish glossy-matte finish To get the iPad into the case you simply lay the iPad 2 on top of it and then slowly work the material along the sides up and over the edge of the iPad. It is a fairly tight fit but that is a good thing since it means the iPad, once inside, isn’t coming out until you want it to come out.

The cover is permanently attached to the case and the small cutout in the middle of the area where the cover and case meet becomes important when the PixelSkin HD Wrap is used as a stand. More on that shortly.

Running vertically along the far left side of the cover is a band of slightly darker material. This material serves to keep the case closed when the cover is set in place. It is an unusual method for securing the cover and it is surprisingly effective. The cover can fold back around the case and sits flat against the back. With the case put in this position the iPad screen is completely exposed while the rest of the device is fully protected. A quick look at the back of the case shows that, in good Speck fashion, the cutouts are all perfectly placed and precise. Yes, Speck pretty much has case design down to a science. The “Pixel” design is both aesthetic and functional since it adds just enough traction to let you keep good grip on the iPad when holding it.

Here’s a view from the side. As you can see, everything lines up perfectly. And here is the view from the top. Two places when the cutout position is particularly important is with regard to the microphone and the camera. Both are quite exact which is no surprise. The reason the cover of the case has “ribbing” similar to Apple’s Smart Cases is that it takes a similar approach and quickly turns into a built-in stand. You just fold the cover back on itself and turn it into a triangle.

You then take the extra bit of material on the edge and push it through the small gap we mentioned earlier. The result is that the cover now places the cover at the perfect angle for typing. It is a simple but effective design and is one I have quickly come to like on every case in which it is employed.

Unfortunately, while Speck took the same approach as Apple with regard to turning the cover into a stand they did not do similarly with regard to the “smart” part of “Smart Cover”. I have come to rely heavily upon the smart sleep/awake functionality that was introduced with the iPad 2. Having the ability to wake up the iPad simply by revealing the screen is remarkably useful, especially when I use the iPad to read or speak in public. While it certainly isn’t difficult to open the cover, tap the “Home” button and slide to unlock the convenience of not having to do ANY of those things is tremendous. Once you start using the feature you cannot help but miss it when it is not present. It is a bit of a bummer but, unfortunately, that is the case with the PixelSkin HD Wrap case for iPad 2. It takes the same form as the Smart Covers but doesn’t bring the function. In all the PixelSkin HD Wrap case for iPad 2 is a great way to fully protect the iPad 2 without adding too much weight or bulk. The built-in stand is quite handy and works well. When using it I did miss the “smart” sleep/awake functionality and, at one point, I found myself wishing the cover could be removed. If you don’t need the sleep/awake functionality however you can’t go wrong with this case. It has Speck’s quality and design all over it.

It is available in Black, Raspberry and Cobalt and can be ordered directly from Speck.

What I Like: Offers great protection; has a built-in stand functionality, doesn’t add much weight or bulk 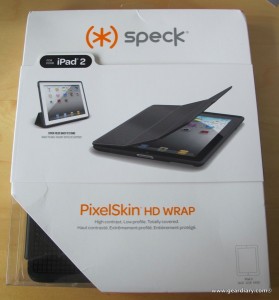 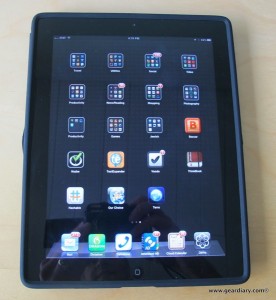 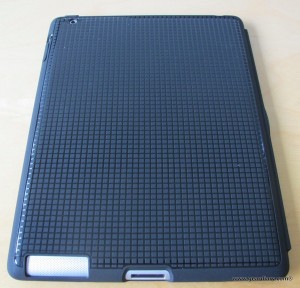 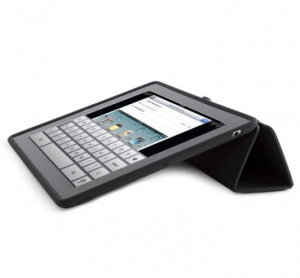