Judie: As is often the case, both of us ordered the new iPad mini the day it became available. Truth be told, neither of us expected that much from the device. Sure, we expected it would be nice to have the smaller and lighter iPad we had longed for, but we never expected what happened next. We didn’t just like the iPad mini, we both loved it — within short order it replaced our larger iPads.

Dan: It took about a day before the iPad mini became my primary iPad. While I enjoy the 9.7″ iPad with retina display, it stays at home and is primarily used for watching video. The smaller, lighter mini, on the other hand, goes everywhere with me and, despite the smaller size, doesn’t feel like a compromise. I’m actually surprised how little the non-retina display bothers me.

Judie: I think the smaller screen made the retina compromise less obvious to me; the mini’s portability means that it is always with me, which is not something I could always say about the full-size iPad. From the start, Dan and I both went in search of ways to turn the iPad mini into an even more effective productivity device. We figured one key accessory would be a decent keyboard. Fortunately ZAGG was quick to release two different case/keyboard combinations. They sent each of us a ZAGGkeys MINI 7; let’s look at how this mini keyboard stacks up. Dan: The keyboard was designed specifically for the iPad mini, and it is only 13% smaller than a traditional Apple keyboard, It includes special function keys (copy, paste, etc) and offers island-style keys in a sleek, unique layout. The ZAGGkeys 7 is a keyboard case with a built-in stand. A soft-touch material covers the entirety of its outside; it makes for a comfortable way to hold the small iPad. Judie: Opening the keyboard/case reveals the keyboard on the lower half and the iPad mini holster at the top. The holster is made from a stiff rubbery plastic material into which the iPad is simply placed. Pushing down on the iPad moves the tablet past the retaining edges that run around the entirety of the case. It is an effective, albeit unrefined, method of securing the iPad in place. If you have a skin on your mini (as I do), you’ll worry about damaging it each time you insert or remove the iPad. 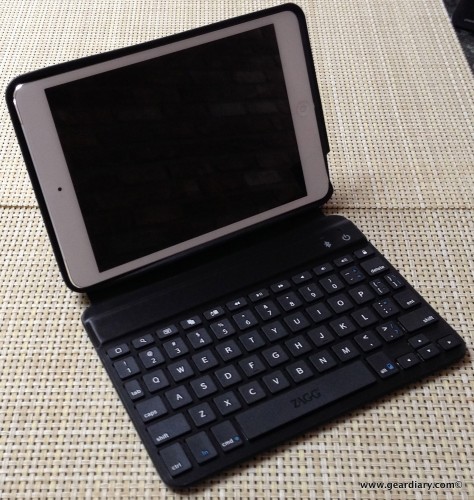 Dan: The tolerances are so small that my iPad mini, which — like Judie’s — always has a Bodyguardz Armor skin protecting it, was a tight fit. In fact, I needed to press so hard that some of the Armor skin was pushed into a different position. Honestly, while I understand the case was designed to be used with a “naked” iPad, I was still a bit unhappy. Judie: If you have ever used a ZAGG keyboard, the charging and pairing mechanism of the ZAGGkeys MINI 7 will immediately be apparent. The included microUSB to USB cable plugs into the microUSB port. The power and pair buttons have indicator lights but no tactile feel. Press the power button for a few seconds and it glows bright. Keep holding the button and the pairing light will blink. Once it does you go to the Bluetooth settings on your iPad mini, let it search for new devices and, when the message that the keyboard wants to pair pops up, you simply input the indicated numbers and hit enter. The keyboard and tablet pair easily, and from then on will reconnect when both are turned on. Dan: Let’s talk about the keyboard. After all, that’s why one would purchase the ZAGGkeys MINI 7 in the first place right? It is… passable. The island keys are nice enough, and the keys each have enough tactile feel and play to make individual keys pleasant enough to use. Put all those keys together on a small keyboard however, and the experience isn’t great. An external keyboard should make typing faster and more accurate. That was not the case here. 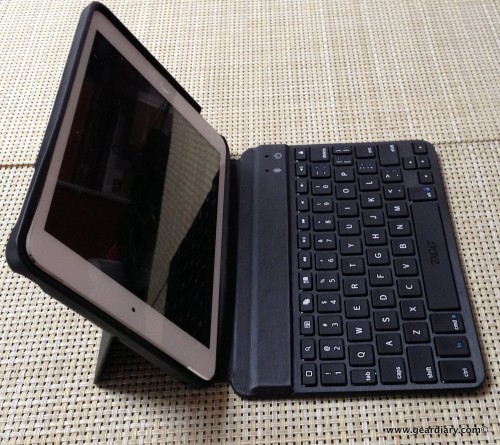 Judie: Then there is the actual weight of the keyboard case: on its own, the keyboard weighs 12.3 ounces. Part of the iPad mini’s allure is not only it small size, it’s that it only weighs 11 ounces compared to the 23 ounces an iPad retina weighs. Adding this keyboard made the iPad mini the same as a full-size iPad retina, and that was a tough sell.

Dan: No matter how hard we tried to like the keyboard, neither of us could get used to the size or weight of the total package. Independent of one another, we both actually found ourselves relieved to go back to the iPad mini’s virtual keyboard.

Judie: When we finally told each other that, we felt like we were admitting a dirty secret!

Dan: On the one hand, that doesn’t speak all too well for a product whose primary purpose is… typing. On the other hand, the more we thought about it the more we realized that neither of us is the best judge when it comes to this. We both, after all, actually like typing on the iPad mini’s screen. I tend to type in landscape orientation, where Judie will hold her iPad mini in both hands and thumb-type in portrait orientation.

Judie: Exactly. For those times when we actually need a real keyboard, we either use our MacBook pros or we use a full-sized Apple Bluetooth Keyboard. With that said, someone who NEEDS a keyboard/case combination may find this to be a great option.

Dan: And two of you will you’ll get to find out for yourself, since we will be giving the two review units away later this week.

Judie: But for those of us who do not feel all too hampered by the virtual keyboard on the iPad mini, and who value the remarkable thinness and weight of the small tablet, adding a keyboard such as this probably isn’t the best option.

Dan: The ZAGGkeys MINI 7 is a decent attempt at a case/keyboard combination that ultimately falls short. The keyboard itself is a bit too small. It doesn’t offer all that much compared to the onscreen keyboard.  The keyboard isn’t the biggest issue with this product however. For me, the biggest issue is the holster, the portion that holds the iPad mini.

Judie: I agree. In addition, I found the entire package to be a bit too bulky and unrefined. While we were confident that our iPads were held securely enough, we were never quite thrilled with how tightly they were being held. A different mechanism for holding the iPad in place would have been better.

Dan: When taken together, the entire package of keyboard, case and iPad is simply too bulky and too heavy. We both opted to make the iPad mini our primary tablet because it is so thin and light. This product undermines both those advantages without adding enough benefit in their place. That’s why I’m sticking with the ZAGGkeys FLEX I purchased on CyberMonday. It offers a bigger, more comfortable keyboard and, because it is a separate product, doesn’t add to the weight or size of the iPad mini.

Judie: And that’s why I’ll just continue to type on m iPad’s virtual keyboard and use my MacBook Pro when I need to do any serious writing.

The ZAGGkeys MINI 7 for the iPad mini is available directly from the manufacturer and from other vendors.

What I Like: Great idea for an all-in-one case and keyboard for the iPad mini

What needs Improvement: Keyboard is too small; the case is too bulky and heavy; the package is simply too much if you chose the iPad mini due to its size and weight