It is RIM’s last hope to stay afloat. After hyping the BlackBerry Playbook and banking on its success RIM has continued to stumble. Even hardcore BB-user like Elana and her brother have left their BlackBerries and moved to other platforms. And as for the Playbook not being a hit, when the company that made their chops on messaging releases a tablet without a native email client, how could it possibly succeed?

So RIM has developed and entirely new operating system and is formally showing off the OS and the devices to run it. I’m in Manhattan for the Blackberry Experience and will be adding text and pictures as the event unfolds. 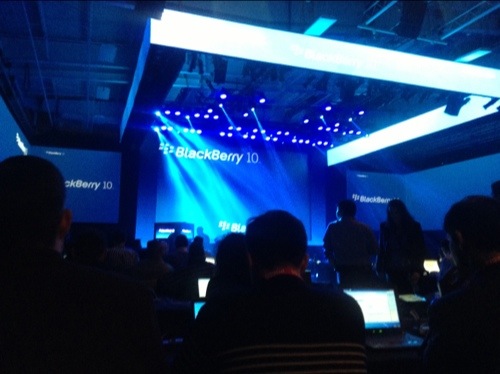 One of the two pictures that keeps cycling through this slides while we wait is a shot of the email client. Clearly RIM is trying to leverage their history as a messaging device. (The other picture is of the camera app. Not a surprise since that ha emerged as one of the most important functions on today’s superphones.) 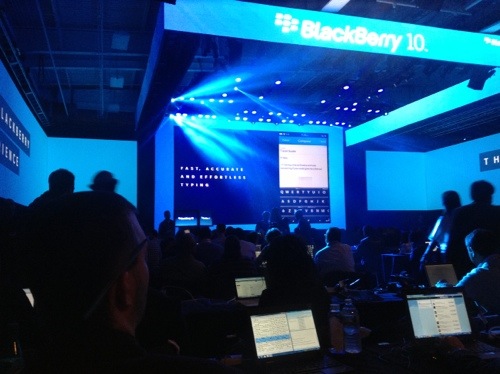 They are hyping the ability to use it for various aspects of your life and keep each area separate while switching between them quickly. 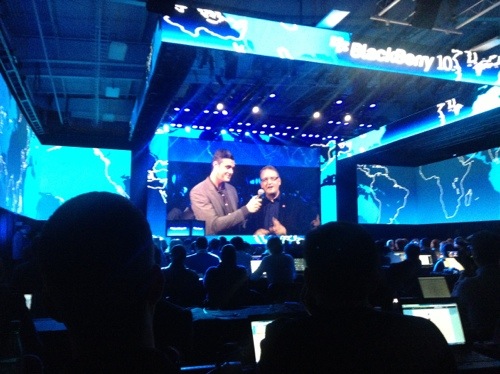 Discussing the last year of working to get developers on board. They traveled throughout the world and are referring to a “huge wave of support” from the developer community. They are “stoked”. “Largest catalogue ever for the launch of a new platform”.

Thorsten Heins took reigns of RIM one year ago and today launched the next generation of BlacBerry. 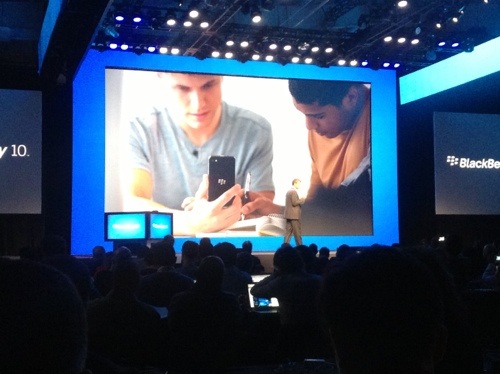 This platform is for people who are hyper-connected and need balance in both their personal and professional life. And it is for people who want to be able to go from one app to another without having to hit a home button over and over again. (A clear shot at iOS.)

“We intend to lead the move from mobile communication to real mobile computing.”
“Constantly connected at all times and we will be a leader in keeping you connected.”

BB10 is designed to work with other devices and extending your mobile computing.

“Today represents a new beginning for BlackBerry. Two years ago we had to make a tough decision. Did we adopt someone else’s platform or did we build a new platform from the ground up.” Obviously they took the even more difficult approach and created a brand new OS. 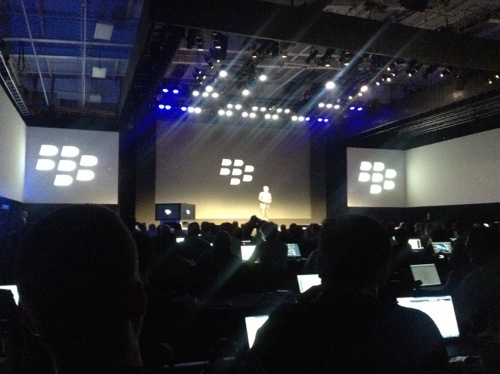 “We have transformed ourselves inside and out… and today we make one more announcement. Today RIM becomes BlackBerry.” They are now one company known by the same name everywhere. The new beginning starts today with “our renaming and the launch of BlackBerry 10. 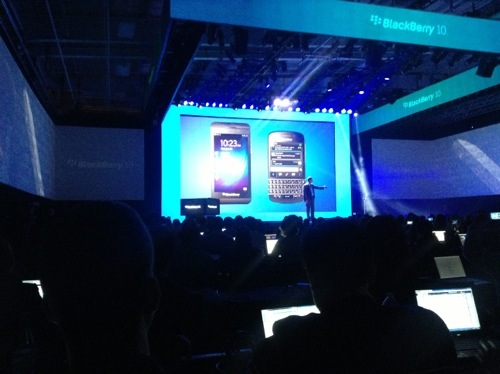 BlackBerry Z10. One new all touchscreen phone. 4.2″ display with 356ppi. Back is a textured surface that is easy to hold. Integrated social communication

BlackBerry Q10. Has a physical keyboard. “We build the best keyboard experience in the world.”

BlackBerry 10 and the BlackBerry Hub and BlackBerry Flow let you move from one activity to another without pausing the first experience to access the second. You can actually get a quick look at your messages. That’s BB Flow. The BB Hub lets you see all your messages in one integrated view. And all of it can be done with one hand and one thumb.

BB10 seems to take social integration to a new level. You can, for example, be going into a meeting, and if you have indicated who is in the meeting the BB Hub will pull down all sorts of information from FaceBook, Linked in and more. That even includes pictures. 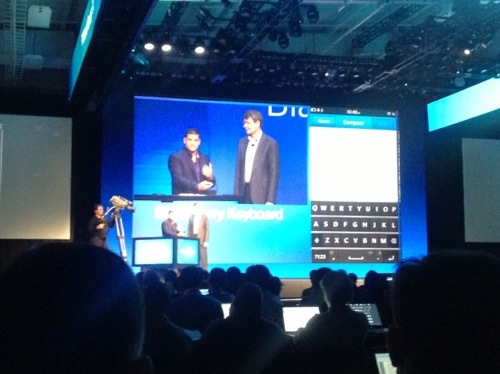 The new keyboard lets you put words into your messages by literally flicking words from the keyboard to the screen. It is hard to appreciate it without actually seeing it in practice. It is impressive. They also displayed the ability to move from one language to another with ease. 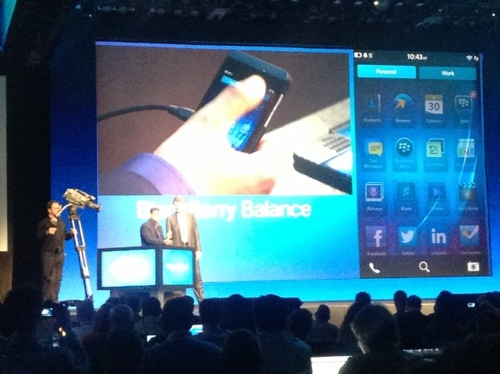 BlackBerry Balance lets you keep your work phone and your personal accounts separate while still being able to keep constant access to both. It means that, on one device, you can have two devices. This feature is one hat I think will really resonate with consumers and enterprise alike. 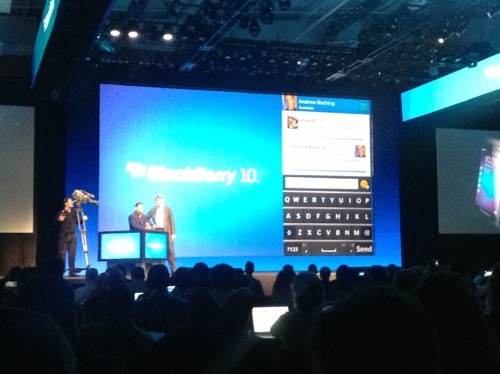 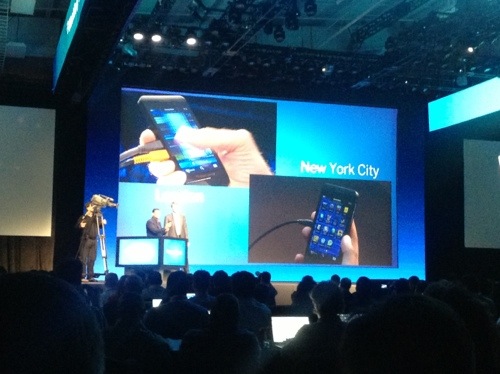 BBM now lets you go from a chat to a video call without leaving one application for another. It also lets you screen share and lets you share your screen with someone else, while also maintaining complete control over the experience. 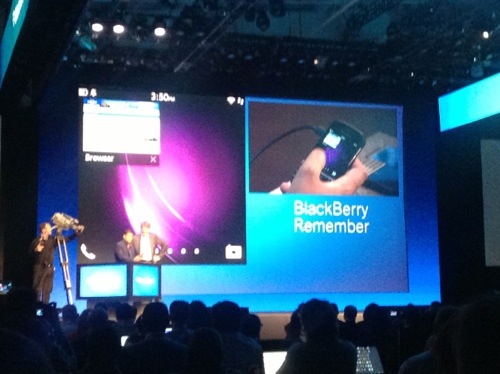 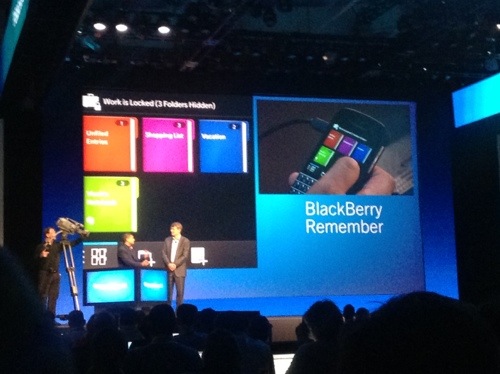 BlackBerry Remember lets you integrate all your content for specific contexts into a single place; this includes Outlook and Evernote content. 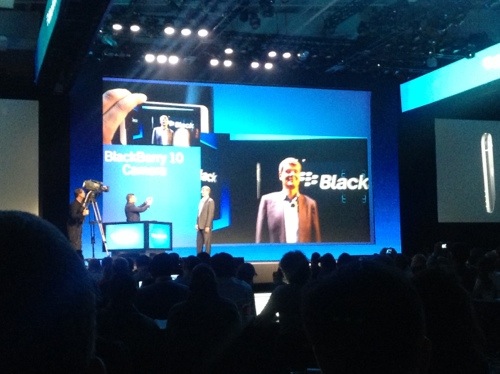 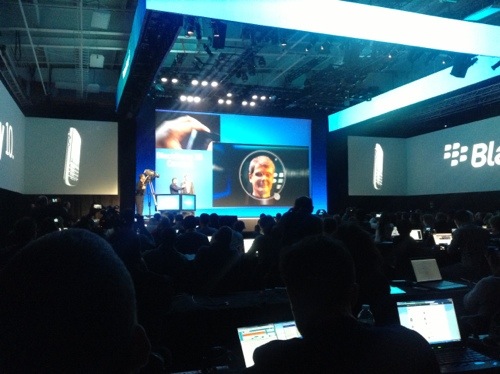 Camera lets you focus by tapping anywhere on the screen. And you can capture a period of time and select the picture you want. The picture editor is also built in. There is no need to jump to other applications. It is all built in and accessible. They have not, however, discussed hardware specifics. In fact that is the case everywhere so far. 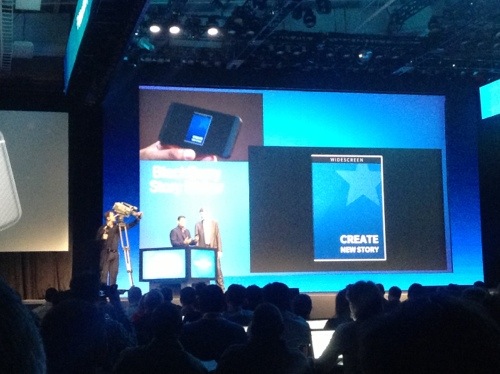 Story Maker is built in and simple to use. It is not a huge innovation but it is nicely implemented and does not require tapping a home button, selecting another app and bringing content into the app. It is much smoother. 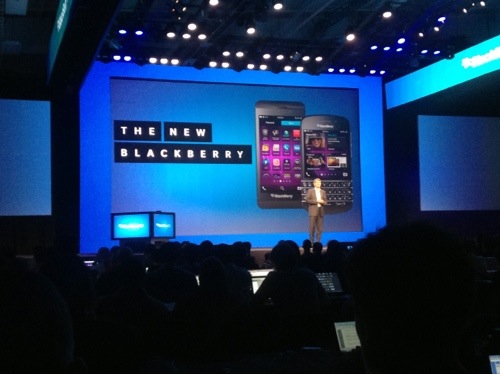 In a world where content is king BlackBerry has made sure to have plenty of content. There are applications, music and movies galore. The company has worked hard to make sure they have parters on board. They have been far more strategic than ever before. There are over 70,000 applications already available. 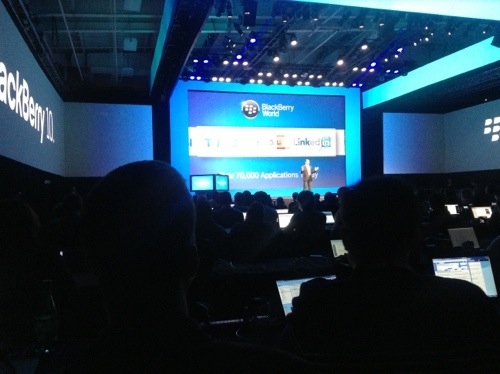 The number and quality of the apps that are already available is impressive. Plenty of games, social apps, music apps, business app. The company accomplished this by looking at what apps are used and talked about on other platforms and then went out to get them on board with the BB10 platform. BB went to them to establish partnerships. “Our partner success is our success.” 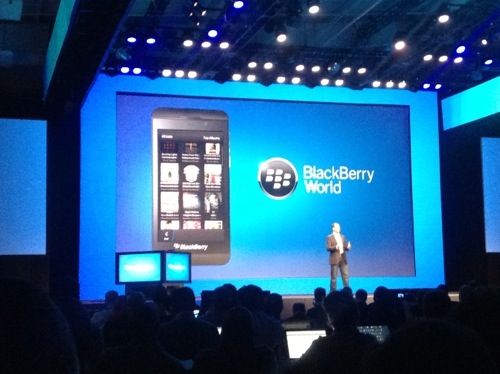 BlackBerry World is now the one place for apps, music and movies. They have all the major studios on board with them.

“When can I get it?” By the end of February we will complete most carrier testing.

AT&T, Verizon, Sprint and T-Mobile will be announcing pre-registration today.
Available in Canada in the next weeks for $149.99 on a three-year contract.
It will be available in the UK tomorrow. 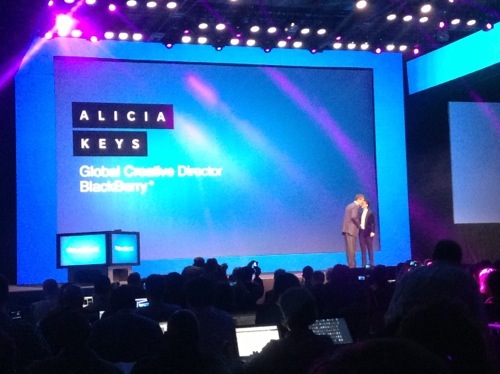 Alicia Keys has just been announced as BlackBerry’s New Global Creative Director. She used BB, left BB and now is back as a BB user. She will work with developers and artists to leverage the power BB10 offers.