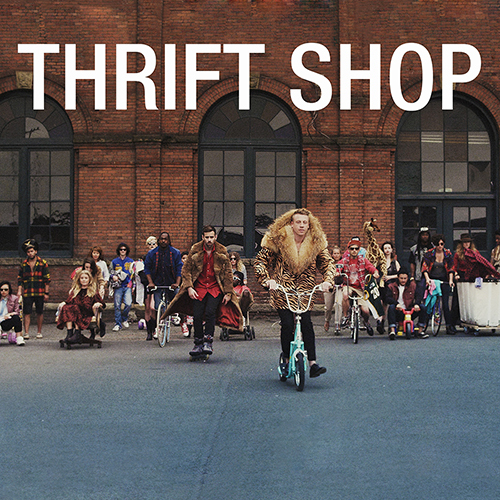 Rap Genius explains the meaning behind lyrics such as “I’m gonna pop some tags, only got twenty dollars in my pocket; I’m, I’m, I’m hunting, looking for a come up …”

Unless you’ve been living under a rock, you’ve likely heard either the NSFW or the terrestrial-radio friendly clean version of Macklemore & Ryan Lewis‘s hit song, Thrift Shop.  But unless you’ve got a finely tuned rap vocabulary, there are probably some lyrics in that song (and every other rap song for that matter) that have left you scratching your head.

Don’t worry, you aren’t the only one. I’m willing to admit that I wasn’t quite sure about the meaning of “pop some tags” or “looking for a come up” when I first heard the song, and it might not have mattered so much if I wasn’t hearing Thrift Shop everywhere I turned. Some might look to Urban Dictionary for a quick explanation, but I think that I have found something better: Rap Genius.

Rap Genius has the lyrics and explanations to thousands of rap songs; anyone can create an account and start entering lyric explanations, and as Rap Genius explains, “If you make good contributions you’ll earn Rap IQ™, and if you spit true knowledge, eventually you’ll be able to edit anything on the site.. just like a hip-hop Wikipedia..” 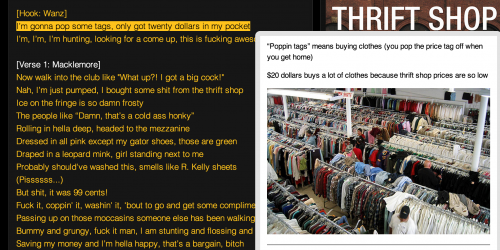 The result of reading through the Thrift Shop lyrics with the Rap Genius user submitted explanations is that you are left with a thorough understanding of the song’s meaning, which in this case is something along the lines of how it’s smart to look for a bargain — wherever it might be found — and that it is stupid to try to spend a bunch of money on things in order to impress other people. That’s a pretty cool message, actually. 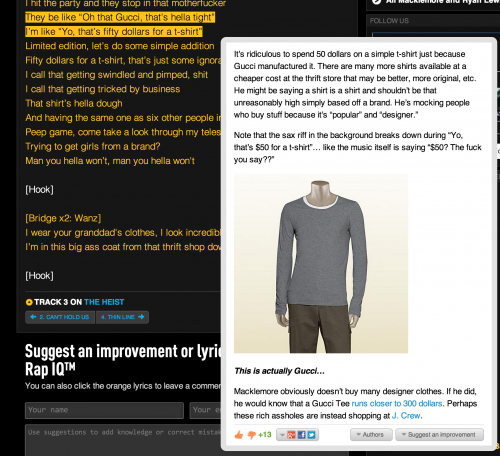 Many of the songs have a link to Spotify so that you can listen to the music as you scan the lyrics. This is such a far cry from what I had to do to get lyrics as a teenager — stopping and starting a cassette in the player over and over and over as I wrote down the words. Did I just totally date myself? Oh well. 😉

Just in case you have managed to never hear it, this is the somewhat less NSFW version from Macklemore and Ryan Lewis’s recent Saturday Night Live appearance …

And if you would rather see the fun Thrift Store video and hear the full NSFW version, here it is …

Intrigued? Want to find out what the real message behind Straight Outta Compton was? Check out the Rap Genius site. Interestingly enough, they have also started using this Wiki approach to break down the news; this should be good!