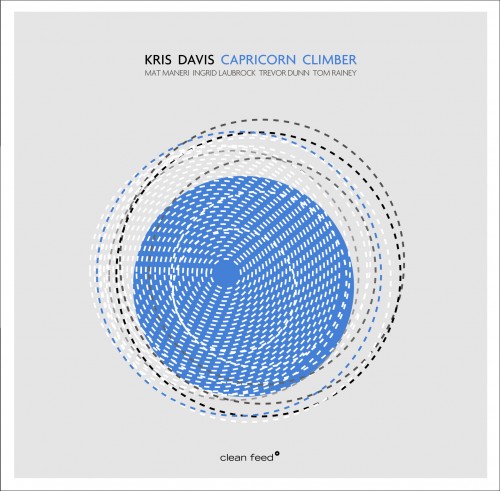 For all of the grand debate about ‘music discovery’ going on with regards to services such as Slacker and Spotify right now, I continue to have success with the same method I have been using for decades. I find an artist I like, note sidemen I like from their recordings or find recordings where they are sidemen, and check those out. Sometimes that leads to me discovering a sideman from an artist two or three times removed from the original person – such as Kris Davis. Davis plays piano on Ingrid Laubrock’s Anti-House, whose new release I wrote about here. Now she has a new album out, so let’s check out Kris Davis Capricorn Climber!

Where to buy: Clean Feed Records (Currently CD only through the site)

The amazing thing about the progressive jazz scene right now is that it is at once incredibly vibrant and diverse, and at the same time small and close-knit. So when you check out the amazing drummer Tom Rainey’s discography you will find collaborations with Mary Halvorson and Ingrid Laubrock, and Ingrid Laubrock was also in Living by Lanterns with Halvorson, which also featured Greg Ward whose solo work I loved after discovering him in Sam Trapchak’s group, which I discovered when Sam emailed me after reading one of my reviews. Small world!

Kris Davis also plays with Laubrock in the trio Paradoxical Frog with drummer Tyshawn Sorey, but the addition of the viola and bass provide a much more expansive palette for Davis’ compositions. That is immediately obvious from the opening measures of ‘Too Tinkerbell’, in which we have the viola and bass bowed to provide a symphonic feel, while Davis plays huge chords and rains down tinkling melodic fragment with Laubrock providing contrapuntal statements and Rainey adding color and texture. After a gritty and tense opening, the song softens into an atmospheric section that has no real melodic lead, with phrases and fragments coming from all corners and providing a comforting sense of community.

The compositions are densely packed but there is always plenty of open space for improvisation and atmosphere. In an interview Davis said that her goal with compositions is to blur the lines between what is written and what is improvised. Anyone reading my reviews knows I love that compositional approach.

With Pass The Magic Hat, Davis, Dunn and Rainey start off the tune sounding like a fairly traditional jazz piano trio that only occasionally drifts in and out of time and harmonic space. But at the same time you can feel the composition building up its infrastructure, and after a few minutes when they are joined by Laubrock and later Maneri and settle into a groove you realize it had been there all along, but by simultaneously playing the written lines and improvising around them the trio was suggesting the structure without strictly stating and enforcing it. It is one of those magical musical moments for me.

‘Quick Hit’ Song: “Trevor’s Luffa Complex” – Once again a song that runs the gamut. We start with an extended harmonic figure from bassist Trevor Dunn, leading into a circular figure from Laubrock joined quickly by Davis with a shaped piano line, and then the entire band joins in. After a few minutes they are fully in the groove, but there is so much counterpoint and playing against time going on that my kids were watching me groove and my older son remarked that the only reason he had a clue where the beat was by watching my head keep time. Laubrock and Maneri play between consonance and dissonance, building and resolving tensions and often leaving them unresolved.

Depite the compositions having a dense structure and the piano heavy melodic presence, throughout the album I found myself feeling that this was a shared community of equals. Maneri plays a similar role here as Halvorson does in Laubrock’s group, and as is the case in many of these groups there is plenty of time given to each of the members to stretch out, and there are also small segments with duets and trios of various configurations. Davis uses each person as part of her broad tone palette, and allows them to operate freely within that context … and the results are stunning. Another reason I think that 2013 is just an amazing year in music already!

Would I recommend?: Absolutely! Somewhere between the extremely high level of playing, the engaging compositions, and the intense communication and interplay, you lost track of songs and time … and don’t care. I love listening with headphones due to the spacial arrangement of sounds reflecting position in the room and making me feel as though I am part of the overall experience.

Suggested audience: At this point I have reviewed things from Mary Halvorson, Ingrid Laubrock, Living by Lanters, and others. If you like any of those you should very much enjoy this … and if not you will not like this one either.