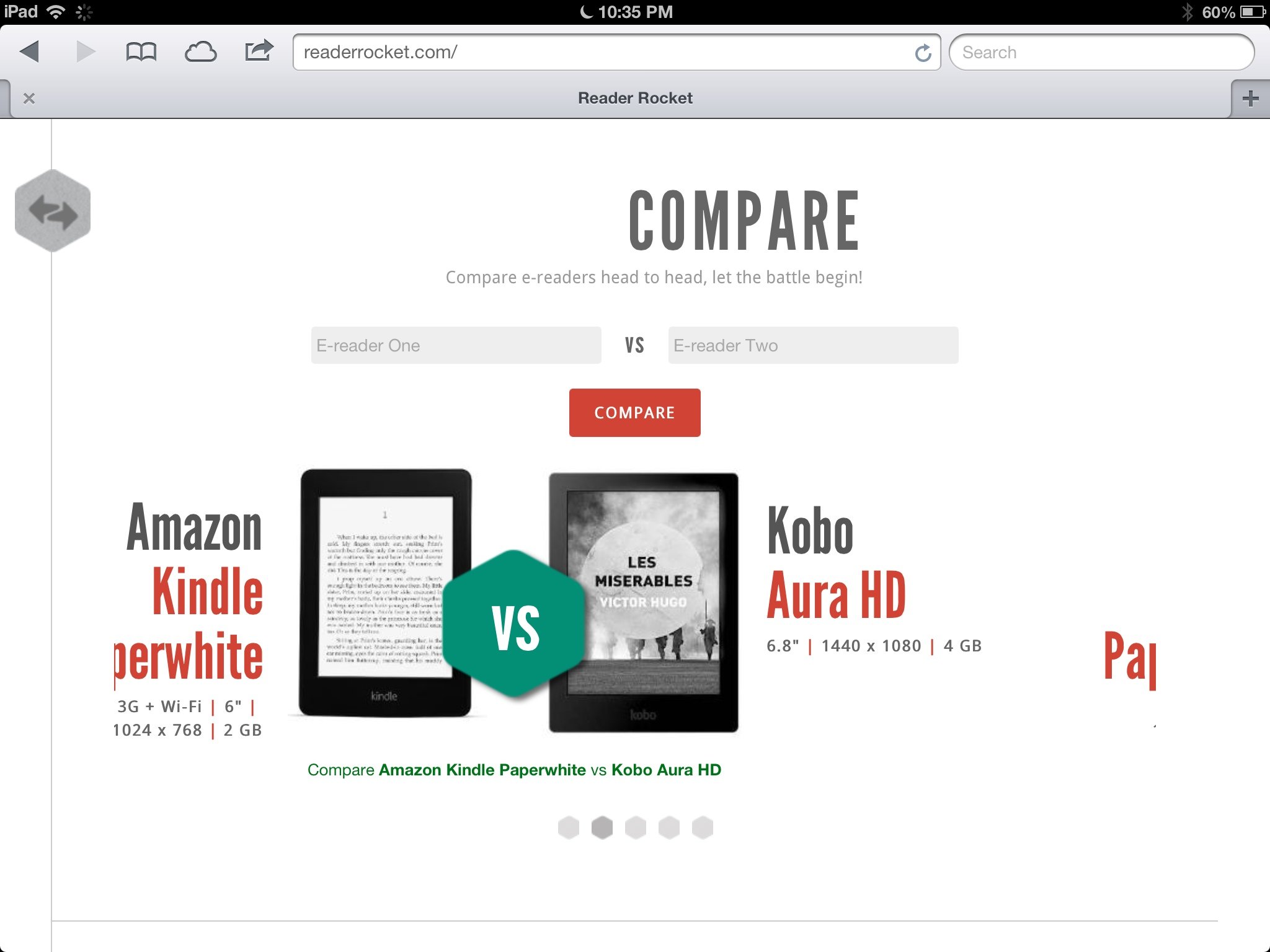 Despite many predictions to the contrary, eBook readers are still going strong. They may not be as flashy as tablets, but they are great devices with long battery lives, clear readable screens, and lightweight both in size and on your wallet. Most people tend to pick an eBook reader based on their bookstore preferences, what their friends and family use, and similar criteria. But if you’re the type looking for lots of statistics and specifications to compare and contrast, it can be tougher to find truly technical reviews of eBook readers. That’s where Reader Rocket, a newly launched site, thinks they can fill the void.

Reader Rocket is an interesting site. They let you do head to head comparisons of eBook readers, even pitting tablet-y readers against eInk ones. Their comparisons can be a little bit questionable sometimes (more on that below), but they pull a tremendous amount of specifications together in one place. If you’ve ever been curious about the battery life of a Kindle Paperwhite versus a Barnes and Noble NOOK, or whether a Kobo Glo is more or less responsive to page turns than a Kindle, this is the place to visit. It’s refreshing to have these comparisons on an independent site, as opposed to a stacked marketing one from a source looking to sell you their particular device.

I tested Reader Rocket when it was in beta, and they had a few bugs with their comparisons that have been improved immensely with their launch. However, in cases where there’s a tie, it still insists on picking a winner, and it’s not terribly clear how it does so. For example, the Kindle Paperwhite vs the Kobo Aura ends with the Kobo device “winning”, though the specifications end up at a tie. When we were discussing Reader Rocket internally this morning, Mike Anderson noted that it seemed like Kobo kept coming up on top, second only to the Kindle in many head-to-heads. This isn’t actually that shocking, as Kobo actually makes decent hardware, but it does expose a flaw in looking solely at statistics. In a more nuanced view, it’s clear that Kobo is a distant third in the United States, but has far more reach overseas. This influences the content, accessories, even price…but isn’t factored into the filter, and so it can make the comparisons a bit wonky depending on your region.

Still, despite that, Reader Rocket fills a niche left behind by the flocking of the market to tablets. It feels a bit like it’s a few years too late to really be a widely used site, but if you have a need to compare multiple eBook readers in several categories, this is a pretty comprehensive way to do it!