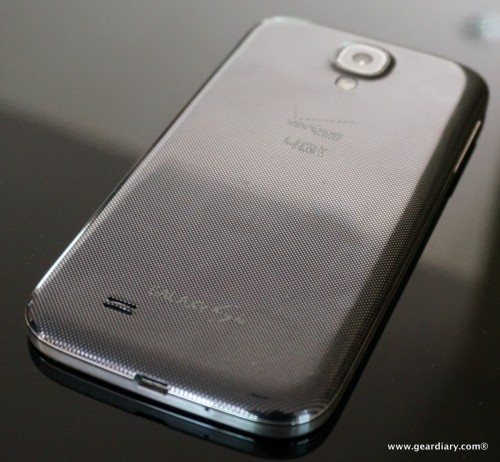 The Samsung Galaxy S4 is the newest incarnation of the most popular Android phone series in the world; it comes jam-packed with state of the art tricks and tweaks, and it is definitely the phone to choose if you want to experience things that might one day be standard on all mobile phones without waiting for that day to actually arrive. Mitchell recently reviewed the S4, and I have been using the US Verizon version for a little over a month.

I have become so well acquainted with the S4 that even though I recently purchased an HTC One, I have found myself missing certain features I had come to take for granted; It’s now to the point where I can’t help but feel that my previously held conviction that the HTC One would be the best choice for anyone looking to buy a new Android phone might have been just a bit hastily made.

Why? Let me give you five good reasons …

1. The Samsung S4 has a fantastic camera. It does a great job of capturing off-the-cuff action shots inside …

… but it really shines when taking photos outside.

I have found that most of the side-by-side photos have taken between the S4 and the HTC One have shown noticeable differences in the S4’s favor. Granted, these were quick shots taken in wonky lighting, but isn’t that what the case when taking pictures with a mobile phone? Here are a couple of examples …

Granted, the S4’s camera isn’t as good as the Nokia Lumia 920 series in low light situations, but not many camera phones on any platform are.

One of the things that I most like about the S4’s camera are its special modes. Usually a phone’s camera will include obvious choices like Auto (which does all the work for you by adjusting the exposure and other settings to take quick and easy pictures), Panorama (those shots that show a super wide-angle view in an extra long photo), Sports (which takes pictures of quickly moving people or objects), and Night (which adjusts the exposure so that photos taken in poor light look better). Those are all present on the S4, of course, but also included are:

2. Samsung has given the S4 some truly special tweaks and apps. My favorites include:

Air View – When you have this feature turned on, you can see information in certain apps without having to actually touch the screen to open the item. For instance, you can assign names to the speed dial, and if you forget who is assigned to a particular number, hovering over the number with your finger will reveal the assigned name. 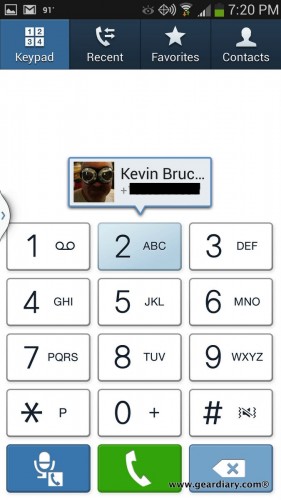 This feature also works in the Calendar, Messaging, Mail, and Samsung Hub apps. 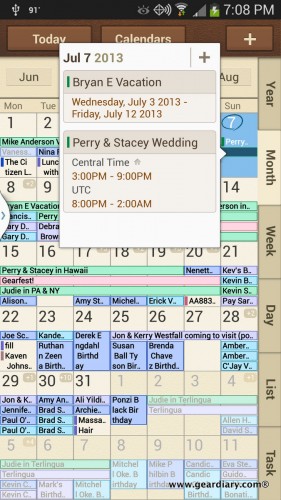 Flipboard, which comes pre-installed on the S4, responds to hovering by previewing content inside the story as you hover over an item in the Flipboard app. 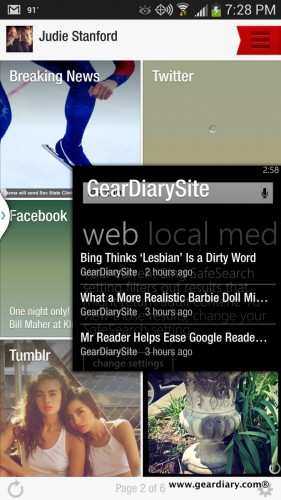 It takes a little while to get used to what you can hover over and get a result from, but there is a sound along with haptic feedback that can be activated to react when you are on top of something compatible.

When browsing, hovering over an item will magnify the content beneath your finger rather than showing you something hidden. 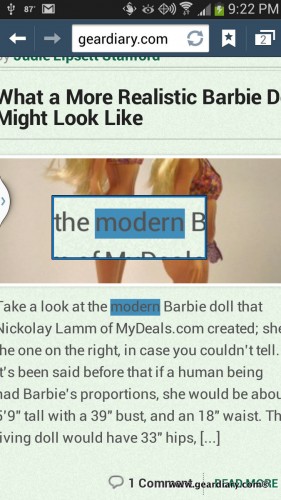 I would find it more valuable if hovering over a link would show a preview of the webpage, but that may yet be a trick for a future version.

Multi-window – Have you ever wished that you could open a messaging window on your mobile phone when you were answering email or browsing — without having to swap back and forth between apps? Well, you can. You can also keep a Twitter feed open in the same window where you have Facebook open, or you can do a number of other app combinations. Granted, the list of apps that this works with is small, but it’s still better than nothing. And because this is something my iPhone, Windows Phone and other Android phones can’t do, it’s doubly cool. 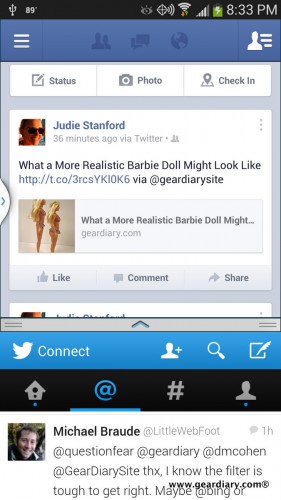 S Translator – speak or enter the text for a phrase in one language, and that phrase will be translated, typed and even spoken back in the chosen language. This should be fantastic for those traveling in countries where they don’t speak the language … or simply for those who are trying to learn a new language. Data charges will apply, of course, so hopefully when abroad you’ll either be using a local SIM or you’ll have WiFi access. And yes, there are other ways to get this on your phone, but S Translator comes baked into the S4, and that’s pretty cool. 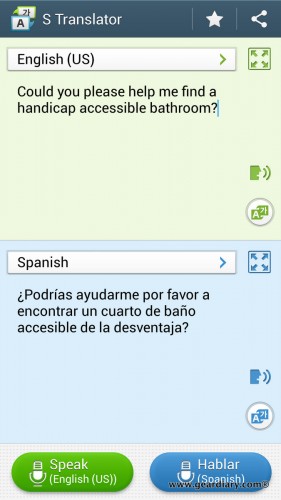 The cherry on top of all of these special apps is a newly expanded Notification Panel that blows all others I’ve seen away. You get to it by swiping down and revealing the regular Android notification panel … 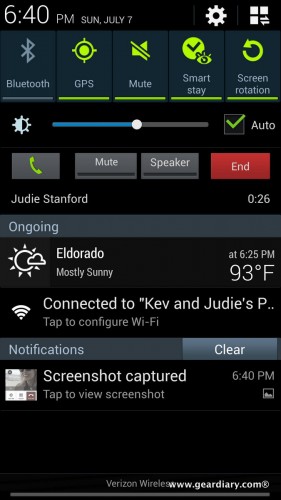 … but when you tap the grid of squares in the upper right hand corner, just about anything you might want to access quickly and easily is revealed! This is brilliant, and my AT&T HTC One is green with envy! 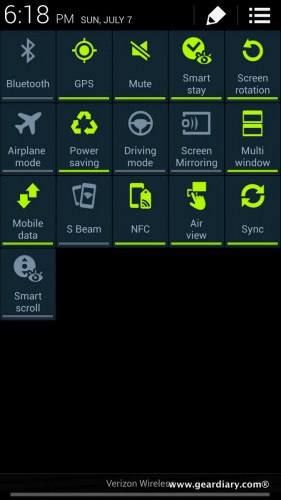 Granted, the unlocked Google Play edition HTC One that I just received has a similar feature, so that just makes it doubly lame that my AT&T version didn’t have anything similar. :sigh:

3. The S4 has expandable memory; if you buy the 32GB version, you can add a 64GB card and have 96GB on board, or you can buy the 16GB version and bump it up to 48GB.. This may or may not be a big deal to you, but if you like to use your phone for digital media such as movies, music, and photographs, you’ll definitely take notice.

4. If you had asked me if 0.3″ could possibly make that much of a difference a month ago, I would have told you “probably not”, but the Samsung S4 has a gorgeous 5″ screen, and it is the perfect size for reading, surfing, and writing. Going from using the S4 to looking at the iPhone 5’s 4″ screen — or even the HTC One’s 4.7″ screen — is almost painful. The S4’s 5″ screen feels perfectly sized to me.

5. The Samsung Galaxy S4 is probably going to be the best-selling Android phone this year, and the after-market accessory makers know it; this means that the S4 will have a ton of readily available accessories. Coming from an iPhone, I am used to being able to find all kinds of cases and add-ons, and I have to admit that knowing there is a better chance to get something cool or unusual to fit this phone, especially from some of the smaller case-makers, makes the S4 an attractive choice.

There is even an inductive (wireless) charging battery cover available now, which allows you to charge the S4 on any Qi wireless charger (like my Nokia 920’s). With that, the Samsung S4 just acquired one of my favorite Nokia Lumia 920 features; the fact that I don’t have to buy a second charging pad makes it even more attractive.

And to be fair, here are a few things that I’m not too thrilled about:

2. Some of the Samsung tweaks are pretty gimmicky, and they don’t always work like they should. Case in point, Air Gestures. Many of the same things you can see on the regular lock screen of the S4 after pushing the power button … 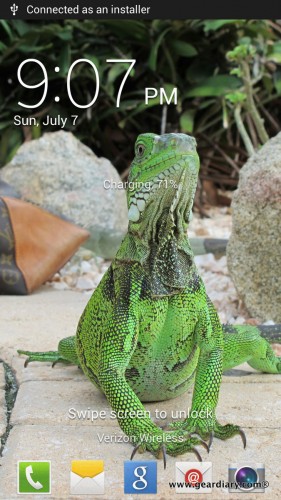 … will (sometimes) magically appear (after a second or two … maybe!) in a special screen when you wave your hand over the S4’s screen, using an “Air Gesture”. 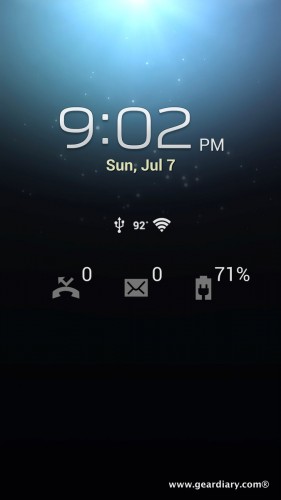 3. Probably the biggest complaint I have with the Samsung Galaxy S4 is its plastic and Gorilla Glass 3 body. Years of using metal and glass iPhones (along with other HTC models and Vertus) have left me associating a bit of heft with quality. So that’s why I find the S4 to be unnessessarily flimsy, light, fragile, and slippery! I can’t tell you how many times I have nearly dropped it! Granted, I could put a case on the S4 to make it heavier and more sturdy, but that would also make it bigger … and this phone doesn’t need to be any bigger. But with plenty of accessory choices, I am sure that there will be a case available that makes the S4 feel solid without making it a brick.

Needless to say, I have found a lot to like in the Samsung Galaxy S4, and I am glad that I’ll have another week to decide if I should keep the HTC One or trade it in on a 32GB S4. Of course, there is much to like in the HTC One, and I’ll soon explore my favorite features in another post.