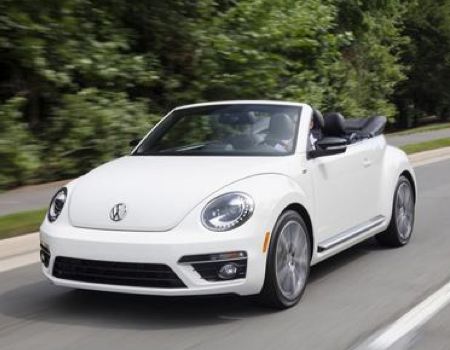 Continuing in the “then and now” theme begun last week in the Grinding Gears Garage Volkswagen sent us a 2014 Beetle Convertible, along with a week’s worth of sunny weather. Our last look at the Vee Dub droptop saw seven days of stormy weather so we did not get the total experience of just how enjoyable this car is.

As mentioned in the last look at this new classic, this is only the third-generation of the iconic “people’s car” from Germany and the second in the era of New Beetle. Last year’s big changes included stretching the wheelbase and giving the car a wider track for improved handling and a sportier appearance – i.e. make the new New Beetle more sellable to dudes. Oh, and did I mention that all second- and third-generation Beetles get the engine moved to the front? 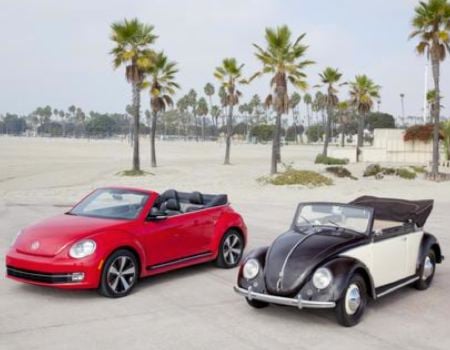 VW Beetle Convertibles Then and Now

While its makeover mission was a success, I did find that haters will always be haters during my time behind the wheel as my man card was checked yet again. No problem, just twist the volume knob on the awesome Fender audio system in the ‘Dubber and drown out those few remaining critics with your favorite music.

The last Beetle Convertible we looked at rolled in with the gasoline turbo 2.0-liter engine that saw 200hp backed by six-speed manual gearbox. A 2014 model line change has all turbo gas Beetles getting R-Line badging.

This time around we were treated to the “oiler” version in the form of Volkswagen’s 2.0-liter TDI turbodiesel rated at 140hp and 236 lb. ft. of torque mated to the six-speed dual-clutch DSG automatic transmission. This technology has one clutch controlling the odd-numbered gears and the other responsible for the even gears so that the next gear is always primed and ready to spring into action for smoother, quicker shifting. And while many may not think of this little diesel car as sporty there Tiptronic shifting for manual gear operation complete with steering wheel paddles. 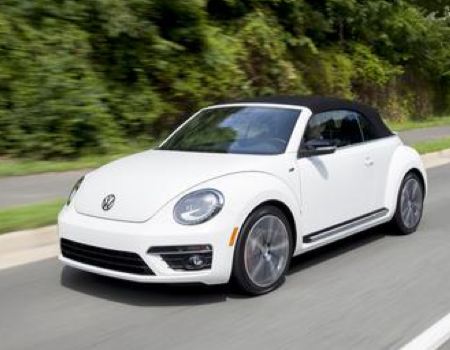 Where the New Beetle really shines is on the road. This car is so smooth it is almost unbelievable. It handles extremely well but offers such a compliant comfortable ride I would recommend it to anyone who does not need a vehicle to haul more than a couple of occupants. True, it does seat four but up to two is the preferred order of the day. And riding down the freeway with the top down I was able to carry on a conversation with the significant other (although many may not agree this is a plus).

Speaking of that convertible softtop roof, I found the top operates very quickly and at speeds up to 31 mph without any hiccups – very convenient. 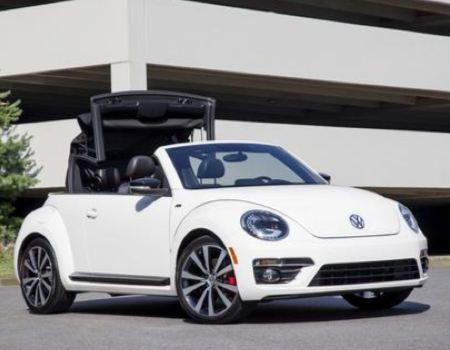 The New Beetles are quite economical in the fuel economy department as cars outfitted with the TDI backed by the manual gearbox can achieve up to 41 mpg. Our automatic car saw 28 mpg city and 37 mpg highway, and after putting a little over 100 miles on our tester the fuel gauge remained well above three-quarters of a tank. 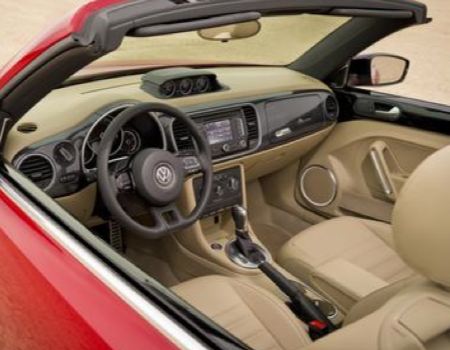 The New Beetle is loaded with the latest safety and convenience technologies and new for 2014 is the VW Car-Net connected services system that offers owners a host of security and driver convenience features including automatic crash notification, roadside assistance and stolen vehicle location assistance as well as remote vehicle access, vehicle health report and enhanced point of interest service on cars equipped with nav systems.

Pricing for the 2014 New Beetle Convertible (don’t call it a Cabriolet, please) starts at $24,995 for a base model with automatic gearbox, while our TDI tester rolled in at $32,560 with the addition of Sound and Nav packages. 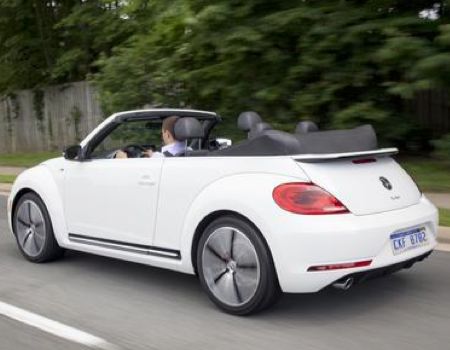 Rain or shine, the New Beetle Convertible is a very nice car that offers a host of amenities, a good value, and a fun, economical driving experience. In terms of comparing the differences between the gas turbo motor with six-speed manual and this TDI with DSG automatic, well, it’s kind of like apples and oranges. The gas motor with manual gearbox is a bit more fun and is quicker off the line, but the TDI kicks in the power in the mid-band and offers better fuel economy. The choice is yours, but you really can’t go wrong either way.