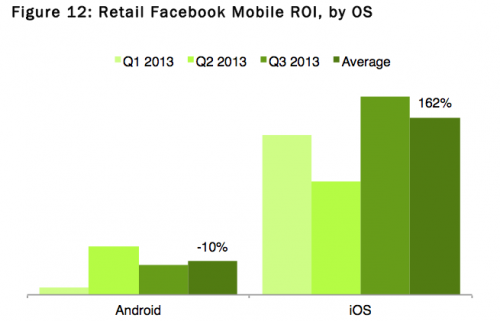 It should be obvious that the reason for advertising on a web site or app is to make money … and more specifically to make more money than you are paying to place the ad. Facebook’s mobile app is ad-supported, but a new study from Nanigans suggests that the advertising on iOS is nearly 1800% more profitable than on Android!

Further, Nanigans suggests that Android advertising gains so little revenue that it has a negative ROI – meaning it is costing more to advertise on the platform than it brings in returns. This is generally referred to as ‘bleeding cash’ and is not a good thing.

What does this mean? It means that people using the Facebook app on iOS are clicking ads – and buying! On Android … not so much. This has an impact – advertisers are willing to spend to get a return, and developers will follow the money. So for me what this says is that regardless of market share, so long as the money (app store profits, ad revenues) stays with iOS, developers will stick with an ‘iOS First’ release cycle.