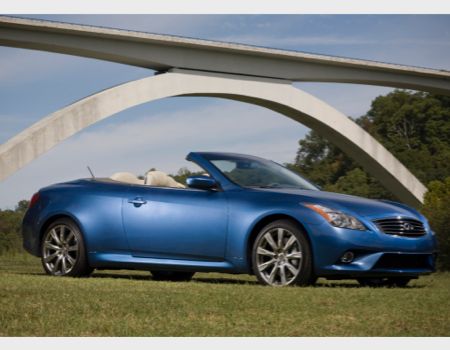 Almost as if they were in the witness protection program, all model year 2014 Infiniti cars and crossovers have received new names. Coupes, convertibles and sedans will begin with the letter “Q” and all CUVs and SUVs will use the prefix “QX.” Recently Infiniti sent us the 2014 Q60S Convertible (formerly known as the G37 Convertible) for review.

Seeking “clarity and cohesiveness” with the new naming strategy, Infiniti says it is embarking on ambitious growth plans to include significant expansion of its vehicle portfolio, and they discovered a need for a new identity and direction to promote consumer familiarity with its model range through the expansion.

OK, so perhaps promoting familiarity means starting by confusing the crap out of folks, kind of like military basic training where they break you down to almost nothing so they have a blank canvas to build on.

So bye-bye G-line and hello Q50 (sedan) and Q60 (convertible). What has remained the same is an Infiniti model that continues to struggle with competing against the 3-Series BMW, a task shared by all automakers globally. They come close, but the Bavarian engineers still manage to elude them despite continued, exhaustive efforts from East to West.

The Q60S we tested is a very good car that offers a dynamic and luxurious driving experience. It is an excellent vehicle in its own rights and competes head-to-head with the Bimmer right down to the 50-something pricetag. Its (Q50) sedan sibling is all-new for MY2014 but the coupe and convertible models are basically carry-overs from 2013. 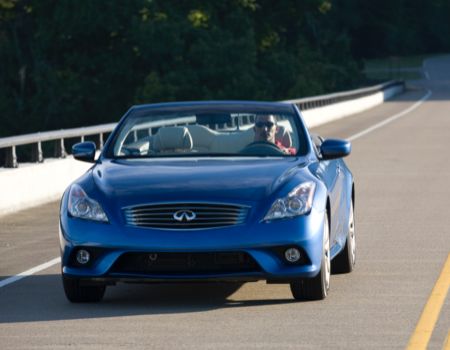 The Q60 is powered by a very smooth 325hp 3.7-liter V-6 and backed by either six-speed manual or seven-speed automatic gearbox. Our tester arrived in the 6MT (manual transmission) configuration. All convertible models feature rear-wheel drive along with independent double-wishbone front suspension and multi-link suspension under the rear. Our review unit rode on stylish 19-inch aluminum alloy wheels shod with summer performance tires (which took forever to heat up, thanks to the cooler than normal weather that arrived with the car).

The three-piece power hardtop roof is a snap to operate although it does feature quite a few moving parts so total operation time runs in the neighborhood of 30 seconds or so which is quite a bit slower than its softtop convertible competition. The benefits of the hard roof are blind spots when the top is up are significantly smaller, and the vehicle is quieter and much more secure.
The “S” designation of this Q60 means the vehicle features more sport-oriented attention that includes sport brakes, suspension tuning, the aforementioned tires and front fascia as well as tighter steering tuning.

From a technology standpoint the vehicle is loaded to the gills, and we really enjoyed the Infiniti Hard Drive Navigation System that included NavTraffic and NavWeather along with the Bose Open Air Sound System that automatically tunes the audio system for driving conditions and includes front seat personal speakers. As Mother Nature did not cooperate during our time in the convertible, I did not get to test the Infiniti Voice Recognition system with the top down while driving. 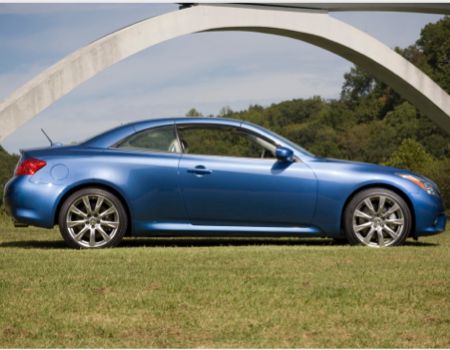 The new Q60S Convertible is loaded with safety technology including side impact and side curtain airbags (yes, in a convertible), along with front seat active head restraints and pop-up roll bars behind the rear seat.

The 2014 Infiniti Q60S Convertible 6MT comes loaded with all-inclusive pricing that carries a window sticker of $53,655 after destination charges. Fuel economy for this model is rated at 16 mpg city and 24 mpg highway so it appears they have already taken into consideration my driving style here – you know, the one where fuel economy suffers a horrible fate. 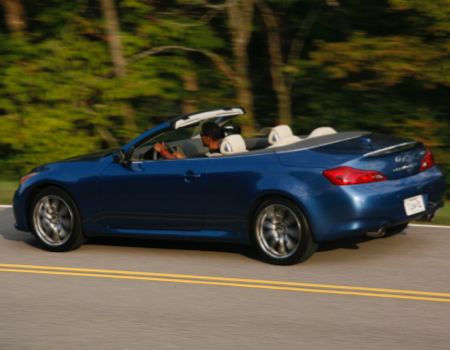 Despite initial confusion over the new naming scheme, the Infiniti is still a great alternative to the Bavarian champion and is a model that should not be overlooked when shopping this segment. Perhaps, in time, “Q” will be more of a household name than “G.”