There is a whole niche of iPhone cases designed to protect your precious phone. Otterbox, Lifeproof, Survivor, the list goes on and on. A very different type of protective niche has begun to appear, where your iPhone case is designed to protect YOU, not the phone. Would you be willing to hold a can of mace to your head? How about a stungun?

No, we’re not joking. So far, Gear Diary has received two pitches for iPhone cases to protect you from the things that go bump in the night. First up is the Spraytect, a case with a can of mace mounted on the back. It makes the iPhone look distinctly unpocketable, which is fine, since the idea behind is that you’ll apparently wield your $600 phone like a weapon. Because when you’re jumped in a bad neighborhood, the first thing you’ll do is pull the safety clip, carefully engage the canister into the firing position, and shoot the mace. I’m sure the mugger will just assume you’re taking a mug shot for later and pose helpfully, rather than, say, grab the phone and run. The company does helpfully include an empty canister for practicing, which is actually smart. But seriously, unless you have ninja reflexes, the odds of you fiddling with your phone and successfully macing someone without macing yourself are pretty slim. And if you DO have ninja reflexes, well, you probably don’t need to mace someone at all. 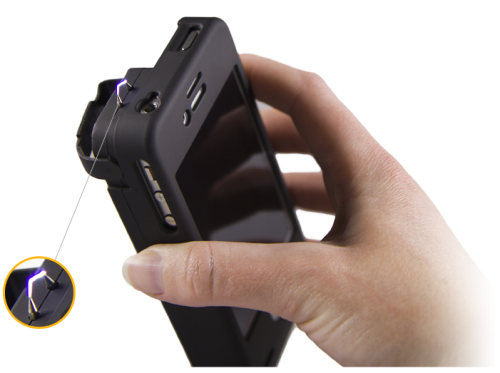 If mace isn’t your thing, you could always electrocute someone with your iPhone. Surprisingly, this does not involve using an off-brand lightning connector, but an actual stun gun built into the back of a case, called the Yellowjacket. On the upside, this also pulls double duty as an extended battery. Now you can stream Pandora without fear, while incapacitating your attacker, AND have the battery life left to call 911 afterwards. As long as you don’t mind holding a recently discharged electrical item close to your head. What’s the worst that could happen, you singe a few hairs? At least you have battery life and a stun-gunned mugger, even if this case does require similar ninja skills to the mace-case.

Both of these cases also create what I think is quite the conundrum. See, if you’re in an area where you’re concerned for your safety, it’s generally not recommended that you wander around flashing your very expensive iPhone-like a billboard that says “Come rob me!” On the other hand, these cases are only effective if you have them at your fingertips. So in order to protect yourself, you’ll need to make yourself a target.

At the rate this arms race is going, I fully expect the talk of the 2015 CES will be a gun with an iPhone case attached. Just be careful answering the phone, so you don’t accidentally pull a Van Gogh!