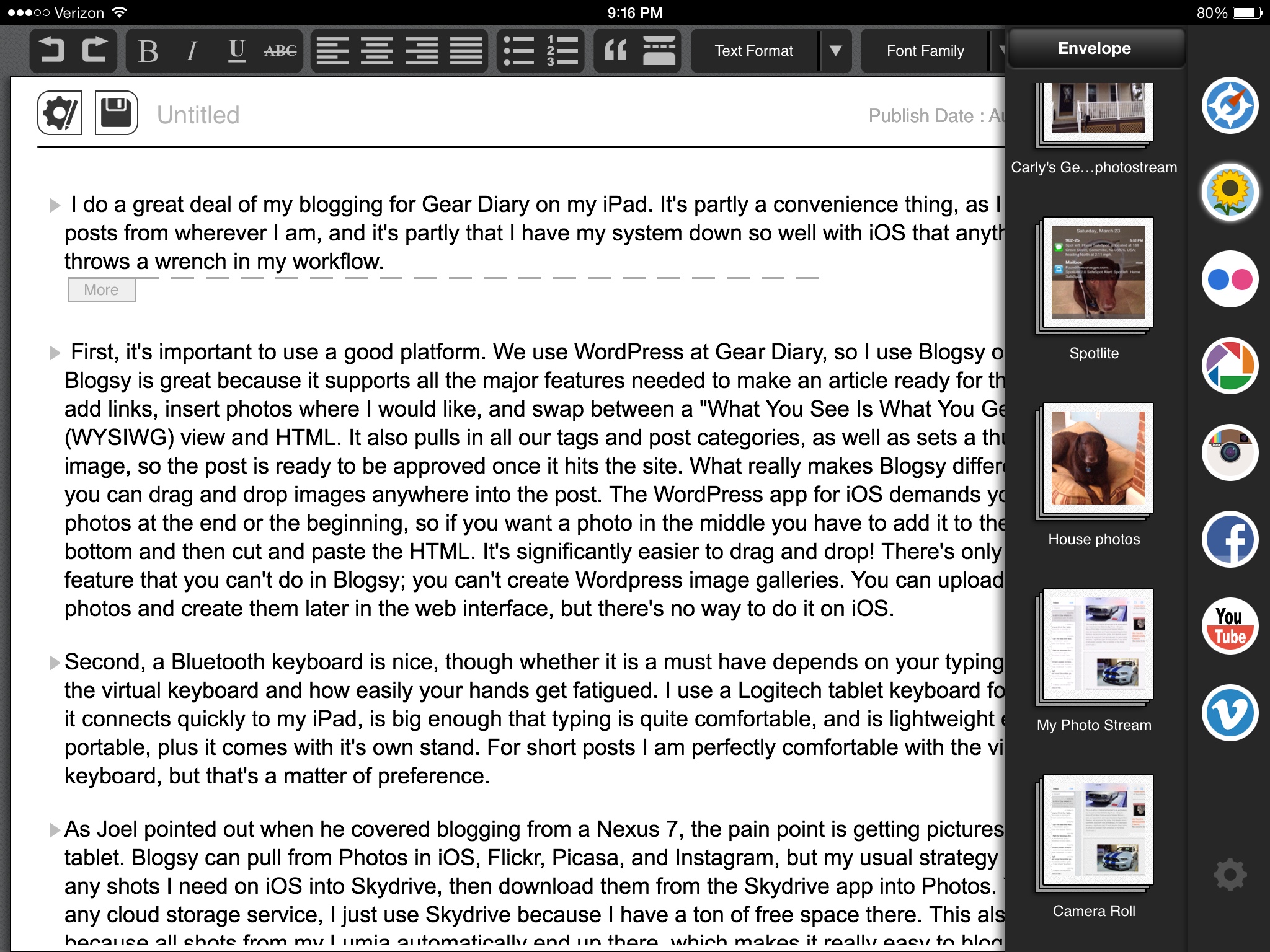 I do a great deal of my blogging for Gear Diary on my iPad. It’s partly a convenience thing, as I can work on posts from wherever I am, and it’s partly that I have my system down so well with iOS that anything else just throws a wrench in my workflow. 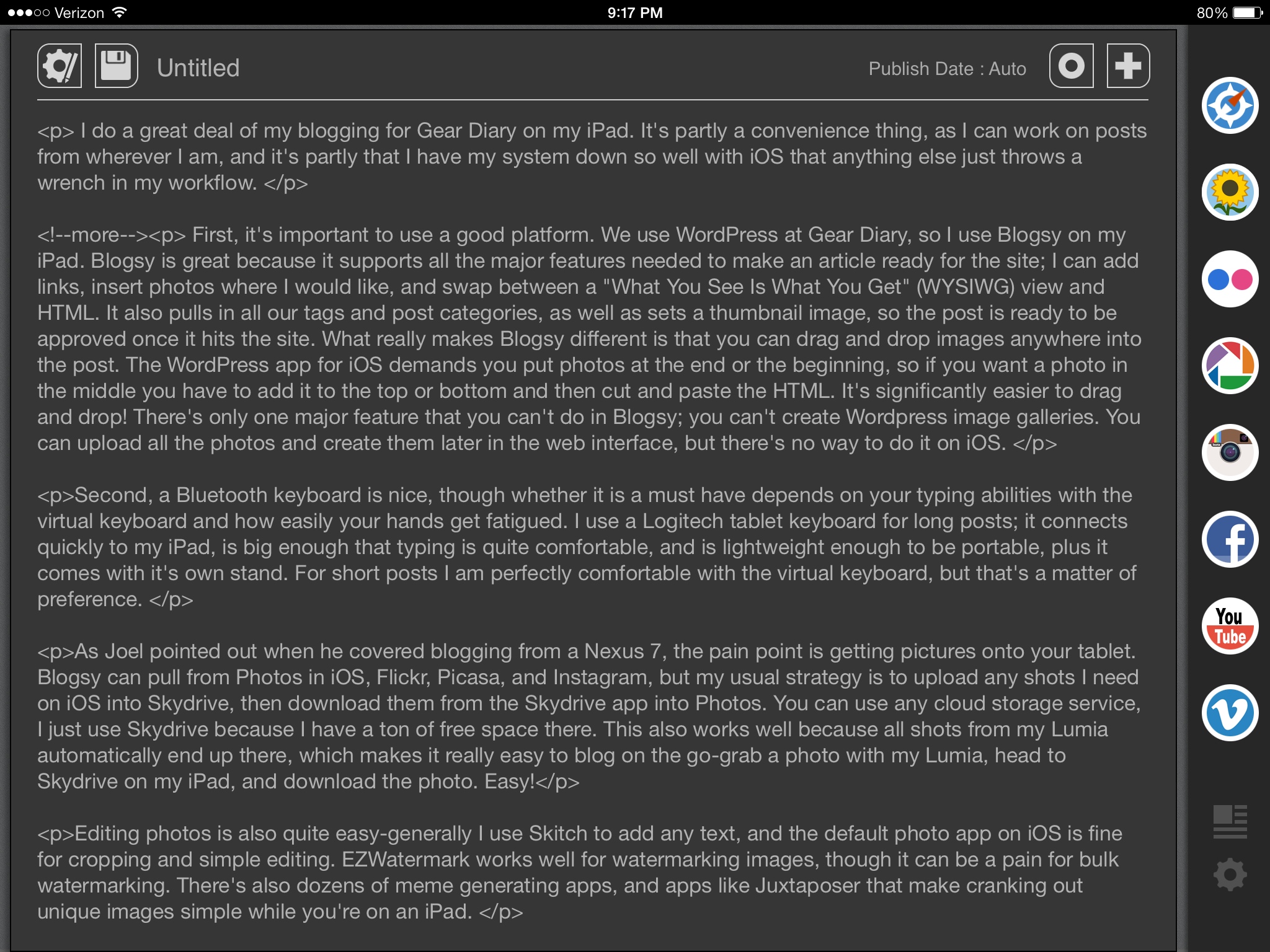 First, it’s important to use a good platform. We use WordPress at Gear Diary, so I use Blogsy on my iPad. Blogsy is great because it supports all the major features needed to make an article ready for the site; I can add links, insert photos where I would like, and swap between a “What You See Is What You Get” (WYSIWG) view and HTML. It also pulls in all our tags and post categories, as well as sets a thumbnail image, so the post is ready to be approved once it hits the site.

What really makes Blogsy different is that you can drag and drop images anywhere into the post, and they automatically center themselves. The WordPress app for iOS works in HTML, and while it’s not too arduous to add photos, you do need to manually edit the code to properly center them. It’s significantly easier to drag and drop! There’s only one major feature that you can’t do in Blogsy; you can’t create WordPress image galleries. You can upload all the photos and create them later in the web interface, but there’s no way to do it on iOS. In the end, Blogsy is the cornerstone of blogging on the go, and it’s well worth the $5.00! 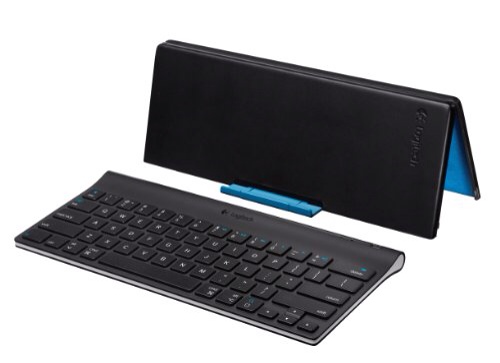 Second, a Bluetooth keyboard is nice, though whether it is a must have depends on your typing abilities with the virtual keyboard and how easily your hands get fatigued. I use a Logitech tablet keyboard for long posts; it connects quickly to my iPad, it is big enough that typing is quite comfortable, and it is lightweight enough to be portable, plus it comes with its own stand. For short posts, I am perfectly comfortable with the virtual keyboard, but that’s a matter of preference. 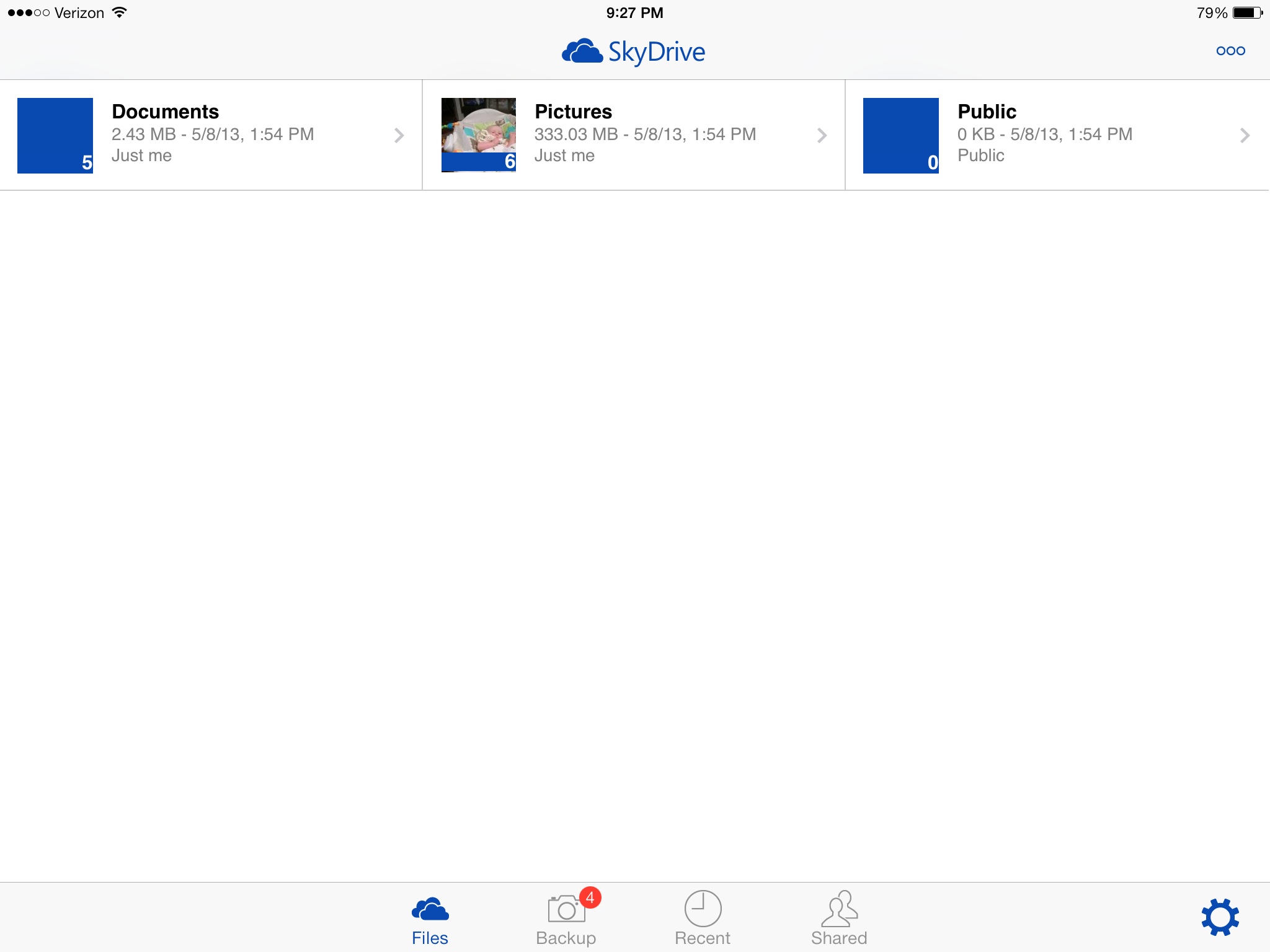 As Joel pointed out when he covered blogging from a Nexus 7, the pain point is getting pictures onto your tablet. Blogsy can pull from Photos in iOS, Flickr, Picasa, and Instagram, but my usual strategy is to upload any shots I need on iOS into Skydrive, then download them from the Skydrive app into Photos. You can use any cloud storage service, I just use Skydrive because I have a ton of free space there. This also works well because all shots from my Lumia automatically end up there, which makes it really easy to blog on the go-grab a photo with my Lumia, head to Skydrive on my iPad, and download the photo. Easy!

Editing photos is also quite easy; generally I use Skitch to add any text, and the default photo app on iOS is fine for cropping and simple editing. Ezy Watermark works well for watermarking images, though it can be a pain for bulk watermarking. There’s also dozens of meme generating apps, and apps like Juxtaposer that make cranking out unique images simple while you’re on an iPad.

In the end, blogging on an iPad isn’t hard at all. You need a good blogging app, some quality photo editing software that you know well, and access to cloud storage to pull your photos onto the iPad. Once you have all those in place, it’s remarkably easy! I really think the simplicity and stability of Blogsy is far superior to sitting down at a laptop with a web browser open to WordPress. It only takes a few minutes to get started, but the productivity it can bring is worth it!