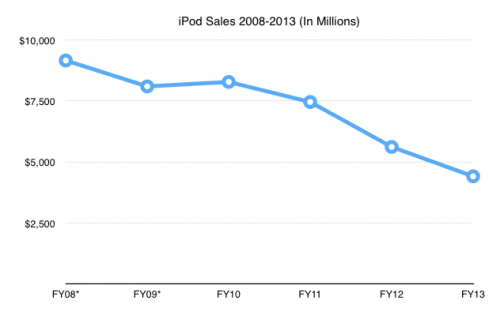 Apple announced its earnings yesterday, which featured loads of record-setting device sales numbers and revenue and profit figures so high they are hard to fathom. Even Mac sales saw a significant boost while the rest of the PC industry marked another double-digit declines. The one area not even mentioned? iPod sales, which continue their decline in a no-update year.

Here are the numbers from the report:

So where is the ‘Declining Business’ comment? It comes from the earnings call, in which Tim Cook said:

The way we look at it, our business is a sell-through point of view less iPod — all of us have known for some time that iPod is a declining business.

If we look back to the first holiday season with an iPhone (January 2008 earnings call), here are the numbers (snipped heavily):

Amazing looking back – Apple made more profit last quarter than they did revenue just six years ago! And they sold nearly 10X the amount of iPods as iPhones! Hard to even think about that now!

But as I mentioned, the iPod lineup has been pretty stagnant – we got a new color this fall, but otherwise the iPod Touch, Nano and Shuffle have been pretty much the same for the last couple of years, and the Classic hasn’t seen an update in FOUR years! In other words, is the iPod decline partly due to the aging product line?

So I asked the other Gear Diary folks – is the iPod a ‘declining business’, an ‘abandoned business’ or …? Here is some of what they said:

Dan started off with the opinion that Apple has essentially (and by design) cannibalized iPod sales through the iPhone and iPad.

Dan Cohen I find it weird to call it a business at all. iPod got sucked into iOS with a few stalwart, one-purpose devices left around while people got comfortable with the whole smartphone genre. They did and tablets came along so the need for a task-specific device- the iPod, became less because all iOS devices ARE iPods… They just are a lot more too.

Also, iPods remained as less expensive alternatives but used iOS devices for music, as a first device etc are often a better option for the same price as a new option.
Finally- the iPod Classic has always had a mechanical drive. Of course that is going to die.

Joel agreed, noting that the only area he sees continuing need is for the Nano/Shuffle for workouts.

Joel McLaughlin I think the iPhone itself is responsible because like Steve said: an iPhone is also a great iPod.

The only category I see surviving is the Shuffle and possibly the Nano because let’s face it: iPhones and smartphones are delicate. Would you take your iPhone…your ONLY iPhone on a run? In the Gym? Even in a Otterbox case it makes the iPhne VERY heavy and if you had a shuffle or a cheaper mp3 player you’d probably take that.

Carly furthers Dan’s point by noting that in a smartphone & small-tablet dominated market, it isn’t much of a surprise to see media-only devices like the iPod and Galaxy Player, etc struggle.

Carly Zektzer I think Dan is right, it evolved into ios. Its not a matter of Apple abandoning the business and someone else still making it work-no one is making money in mp3 players anymore. Even the ipod touch knockoffs like the Galaxy Players and Archos devices struggled to find a market in a tablet and smartphone world.

Joel also notes that the cool Samsung Galaxy Camera looks and reviews great, but continues to struggle for market acceptance (and shelf space).

Joel McLaughlin Yes Carly…..just TRY to find a Galaxy Player anywhere else but online. ALMOST impossible. The only ones that are similar that I even see in stores are the ones that are cameras first and even they are not selling like Samsung wishes.

Dan Cohen Over the weekend you could get a freaking Nokia 520 for $50. Why NOT get one even as “just” a media device. That will kill any market.

Travis noted how the iPod feature combined with streaming audio on Spotify makes his iPhone the only music player he needs.

Travis Ehrlich I agree with Dan’s point. My iPhone is my “iPod.” Actually, I pretty much only stream my music from Spotify Premium. I do not use any hard drive space.

I’m able to download playlists to my phone with Spotify Premium if I know there will be no service. Have not needed to yet, but it is an option.

But Wayne countered with what many iPod Classic fans say – it remains the only ‘all my music’ alternative.

Wayne Schulz Define iPod first. Because if they’re talking iPod Classic none of you has 160 GB “store my whole library” capacity.

Joel McLaughlin I stream too! Pandora One and Google Music for me (but not the paid service).

After every announcement I kind of chuckle as I see the screams for a 128 GB iPhone are slowly going away. Although there are always some that want the capacity…

Which Dan notes as well, highlighting that the ‘non-streaming’ crowd is dwindling fast. But that he DOES like some locally stored music for times of no internet and to use audio apps since streaming music apps don’t share their libraries.

Dan Cohen If you mean “160 GB store my whole library locally so I don’t need to access the Internet to get to it” the number of people who have a library that large or need to have their hundred and 60 GB local and aren’t willing to stream from the cloud is pretty darn miniscule.

I still like having some music resident- not only for times with no connectivity but also because another third party audio apps can only use local iOS-saved music thanks to sand boxing.

Personally in my car I have borrowed the 8GB iPod Nano (phatty version) that my wife stopped using when she got her iPhone. Why? Physical buttons. For me that makes a big difference because it is hard to operate the iPhone screen without looking – especially with each music app having a different UI.

But that comes with a price – inflexible shuffle options, need to physically hook up to Mac, music needs to be ON the Mac, and so on. It is an archaic option.

So what do I think? I think that there are a few legitimate reasons for the iPod lineup:
– Workout – as Joel mentioned, phones are fragile and if all you want is music, a Shuffle or Nano is all you need.
– Young kids – a small gaming device that can also play music, movies, etc.
– ‘All my music’ – the 160 GB Classic offers this like nothing else.

The problem? Each of these has a counterpoint.
– Workout – pretty much every runner I know takes their phone when they run outside. It keeps them in contact in case of emergency, offers a GPS, and also handles music. The number of workout belts / holders has exploded.
– Young kids – you can get a Kindle Fire HD or HDX for cheaper, and even the non-Retina iPad Mini is a better deal.
– ‘All my music’ – Get a 128GB WiFi storage drive for $200 – it is solid state rather than mechanical, and a simple way to access (almost) all your music from a number of devices.