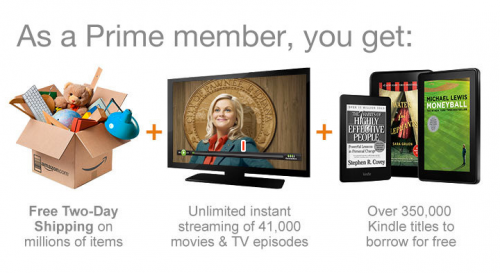 Would you be willing to pay more for Amazon Prime? Soon you may have to.

Amazon reported  quarterly earnings today, and revenues were $25.59 billion vs expected revenues of $26.06 billion. Sales were up 20% over 2013, however Amazon missed their revenue forecast which caused the stock to decline 10.6% after hours. Even though sales increased by a healthy margin, the stock market looks to the company’s ability to meet (or exceed) revenue goals.

During the earnings call, Amazon officials noted that shipping costs rose 19% to $1.21 billion during the quarter. This rise in costs led Amazon to state they were considering raising the fee by $20-$40 for their popular Amazon Prime service which presently charges $79 per year and offers free two-day shipping on most items, instant streaming of 41,000 videos, and a free Kindle borrowing library.

This raises the question of how many Amazon Prime members would cancel if the annual fee increased to a point above $100. For many people, myself included, Amazon Prime has become a way to avoid a lengthy trip to the store to purchase items which could just as easily be delivered. We use Amazon Subscribe and Save to keep stocked up on items such as laundry soap, dish detergent, paper towels and other bulky items which Amazon ships to us free as Prime members.

For the last several years, I’ve done 75% or more of holiday shopping via Amazon because their shipping is free and generally (aside from some mishaps this year) arrives on exactly the day that it’s promised.

Amazon’s problem with Prime is that customers actually use the service. In many cases “all you can eat”  service plans such as Prime rely on a portion of the subscribers failing to use the service to the maximum. However in Amazon’s case, it becomes easier to order online and let Amazon ship a package for free and the UPS man to deliver it to your doorstep. Enough Prime members are using the service that it’s probably time for Amazon to increase the fee.

Surely a big factor in whether Amazon raises the Prime fee would be competition. However, Amazon has such a big lead in online retail it seems unlikely the majority of customers would leave over $20. If Amazon were uneasy about a big fee increase, perhaps they’d cut back on the free videos and Kindle rentals or perhaps make those a separate subscription service altogether.