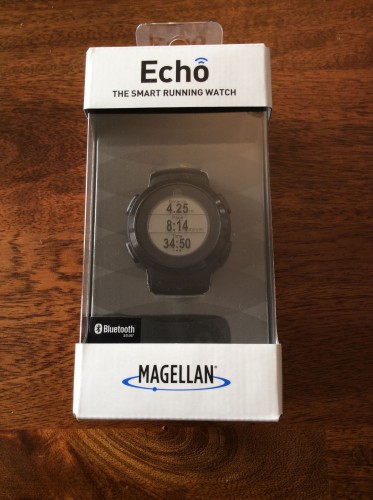 The past two years I have tried GPS watches from Nike to Garmin(s) to Magellan to Polar. Each has positive and negative attributes. Ultimately the design comes back to ‘how much can we stuff into this and keep it wearable’. Magellan Echo answers this by offloading functionality to the smartphone we carry, and acting as a display and controller. Brilliant!

Running with your smartphone just got better. The Magellan Echo watch solves the biggest problem when running with a smartphone – viewing and controlling fitness apps while the phone is tucked away. Using Bluetooth Smart technology, Echo displays real-time fitness app data from your smartphone. Never again break stride or stop to check your running data from an arm band or running belt. At a glance, you can see distance, pace, heart rate and more from fitness apps in real-time.

Not inspired by your current song? Need something more up tempo? Echo gives you convenient control over your music. With Echo you can start, skip, and pause any song so you’ll never miss a beat. 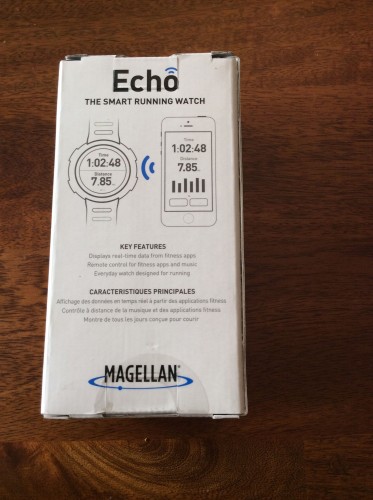 The Magellan Echo consists of three parts: the watch, the heart rate monitor, and an app on your iPhone to provide GPS and gather data.. Let’s walk through each of them before bringing it all together.

The Magellan Echo supports several fitness apps such as Strava, MapMyRun, Wahoo Fitness, and iSmoothRun. When I started out I already had an account at MapMyRun so I just used that app … and was profoundly disappointed. It really didn’t do much with the Echo other than display data. I couldn’t figure out how to reconfigure things, and couldn’t get much control to happen. In my search for clues, I found that in all of the things Magellan had sent there was a set of instructions for using the Echo with an app called Wahoo Fitness. So … I gave it a try.

I did a full review of Wahoo Fitness here, saying:

Again, why I loved this was that rather than ME changing, Wahoo recognized I might do different workouts, use any of several devices and want to track my data in a variety of places, and they make changing all of that easy for me.

My recommendation: if you are getting a Magellan Echo, Wahoo Fitness is essential. If you are using your phone to track fitness … give it a try. You’ll probably love it. 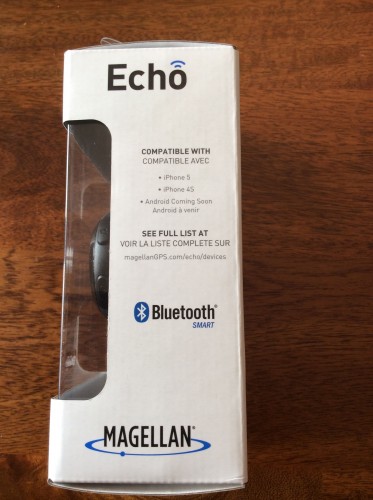 In terms of basic design and use the Magellan Bluetooth heart rate monitor is very similar to the one from Polar I reviewed with the RC3 GPS watch. Once again it is a strap that goes around your chest, and the monitor itself snaps on to the band. The band is elasticized, and has a conductive area to enhance contact between the monitor and the chest.

You still need to wet down your chest and the back of the strap. This aids in conduction and activates the wireless communications from the monitor. It is also a huge pain given our cold weather recently … but that is just how the technology works.

One huge benefit is that the monitor is Bluetooth. This means that it will work with any device or app that supports low-power Smart Bluetooth communications. In use I found that it worked perfectly with the Wahoo Fitness app as well as any other iPhone fitness app.

I have used the Magellan heartrate monitor at least 40 times over the last two months and have been very impressed at the quickness of the connection, reliability of communications and fit of the strap. 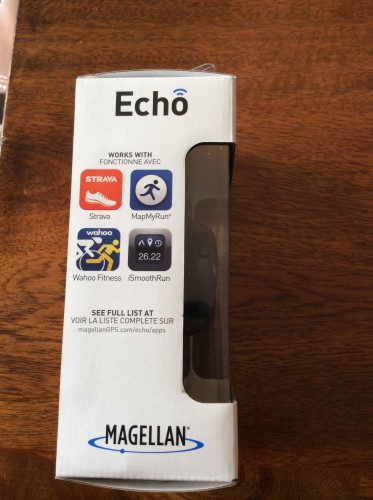 The Magellan Echo Smart Watch is different from other GPS fitness trackers, because it contains no sensors, no tracking software, nothing but a touch-sensitive adaptive display and four side buttons.

You can wear the Echo as a normal watch, as it is visible, functional and fairly attractive. Of course, since it contains a low-power smart Bluetooth communications system and is meant to store multiple display modes, only using it as a watch is probably not the most cost-effective solution. But compared to other sports watches by makers such as Timex and Casio, you get a solid and attractive package. 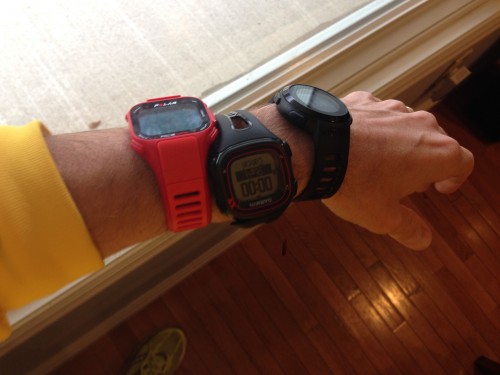 But the real reason to use the Echo is as a smartwatch, displaying workout data in real-time from your smartphone. Using an app such as Wahoo Fitness, you can configure the functionality of all four side buttons, the touch surface, and what is displayed on-screen. There are multiple pages allowed, so I ended up putting GPS info on one page, with time and heart-rate data on the second page. You can have even more pages, so you can customize what is shown to a very large extent.

I have only been using the Magellan Echo for two months, and they have mostly been very cold months. Sure there have been days as high as 60F, but there have also been more than our share of sub-zero days. So far the Echo has performed perfectly – it has a bright backlight, reasonably loud chime, crisp and clear display, and sensitive buttons. The band is sturdy and easy to use.

It is hard to estimate how something will perform as a long-term fitness tracker based on only a month or two of use. That said, the Magellan Echo has proven so far to be reliable and robust across a broad range of extreme conditions. The heartrate monitor works well and the strap is also holding up perfectly.

The Magellan Echo with Wahoo Fitness combine to provide a system for tracking your health and fitness as you workout and to analyze your workouts offline. I love that it makes use of the phone I already have with me, that it doesn’t constantly require recharging and syncing with a computer, and that it is a light and attractive watch. I can definitely see myself continuing to use this long into the future.

What Needs Improvement: Dependent on apps for functionality and flexibility; iOS only.