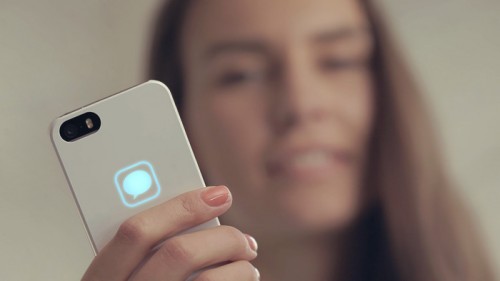 Here’s another cool Kickstarter project, and one of the most useful that I’ve seen recently. The LuneCase utilizes the “leaked” electromagnetic energy from your iPhone to show notifications about incoming calls and text messages on the back of your phone before they ever show up on the screen of your smartphone. No battery power or Bluetooth connection is required.

It just works by “magic”, using the electromagnetic energy emitted by your phone. The case will be available for the iPhone 5, 5S, and 5c, in either black or white and is expected to ship in August. There’s even a “future proof” reward level that guarantees that you will the LuneCase for the iPhone 6 within about three months of the new model’s initial release.

The initial $50,000 funding goal has already been met, with over a month left in the Kickstarter campaign. The early bird pledge levels are already gone; you can get in on the action for $39 for a basic LuneCase, $99 for a personalized engraved version, or $3000 for a VIP experience at the company’s headquarters in Kiev.