Apple’s WWDC- World Worldwide Developers Conference- is the first chance we get to see what will be coming in the next versions of iOS and OS X. As usual we expect to get updates on sales numbers, store performance and more. We might even see new hardware today but… Who knows. We’ll have a summary of the news and more.Much has been made of the ho-hum quality of Cupertino’s keynotes since the death of Steve Jobs. And while it would be hard for anyone to follow Jobs and his charismatic showmanship, the critics do have a point. The excitement just hasn’t been there the past few events. Will this year’s break that trend and serve up something exciting? We’ll summarize the news in this post and invite you to join with us in the comments discussing what it all means. 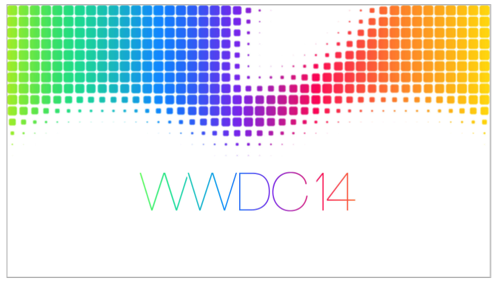 What is going to “Wow!” people? What will make them take a nap? We’ll know shortly.

The event began with a variety of people describing their favorite app on video. A very odd start imo- although the app-controlled hand was pretty amazing. Ultimately a nice hat-tip to the developers creating awesome apps.

Cook is on stage and thanking all the developers.

This is the 25th year of WWDC. The first has under 1500 developers.

Mavericks- Released in October. Over 40 million installs since then. Over 50% of Apple install base is on Mavericks.

Now taking a dig at Windows. Windows 8 shipped a year before Mavericks and its install base is 15%.

Yosemite is going “Flat” the way iOS 7 did.

Notifications has been more deeply developed and customizable.

Spotlight is stealing a few tricks from Launchbar and may replace it for many… including me.

Calendar has a new day view with appointment details in one glance.

All your folders that are in iCloud will be shown in Finder.

You can store all your own files in iCloud, use tags and synchronize across Mac- Dropbox Killer?

Mail Drop- Sends attachments through iCloud and shows up as the file on a Mac or as an attachment link on other devices. The files can be up to 5GB

Markup- Images or PDFs using the iSight camera or the trackpad.

Everything is condensed into a single bar at the top. Much more powerful, faster and more functions than ever.

Airdrop now works between iOS and the Mac (YAY!)

Hotsport activation is now one tap

SMS- Non-iMessage messages will show up on all devices

Phone Calls- When you receive a call your Mac shows you caller ID AND you can use the Mac as a speakerphone. It even works when the phone is a distance away.

The switching between iPhone, iPad and Mac is pretty amazing and really locks down the reason you will want to be on one platform/ecosystem.

Yosemite will be free!

And they will have a public Beta program.

130 million people who bought an iOS device in the last year bought their first Apple device.

“Now many of these customers were switchers from Android. They had bought an Android device… by mistake… and then they decided they wanted a better device… and life.”

Almost 90% of people are running the current version of iOS. (Less than 10% of Android users are using KitKat)

Apple does as much as they can to get updates to as many users as possible.

Refined Notification Center with interactive notifications. Pull down to respond to a new notification. Also works in the lock screen.

Double tap will also let you contact people you most recently contacted.

On iPad Safari gets the sidebar from Yosemite.

Swipe to delete in email.

Swipe down to put current message at the bottom and access the rest of your email.

Mail offers intelligent suggestions for what to do with an email.

iMessage- Name a thread, add or remove people in a group thread, leave a thread, Mute a thread etc. You can also share your location with a tap.

Lots of devices and accompanying applications but up to now the information grabbed by those devices all lived in their own silo.

HealthKit lets applications work together. Health app lets you monitor it all.

Working closely with the Mayo Clinic.

You can now get at all the purchases of your family. You can have up to six family members sharing the same credit card.

Photo + iCloud means every picture you take will be available on every device.

“Hey Siri” is the iOS version of “Hi Google Now” and Siri shows transcription as you speak.

iOS 8 will allow extensions in Safari

And a unique app-connected keyboard will not be permitted.

3rd Party apps will be able to use TouchID